We discuss expectations for the "merge" timeline, representing the Ethereum network’s change from a proof-of-work to proof-of-stake consensus mechanism. 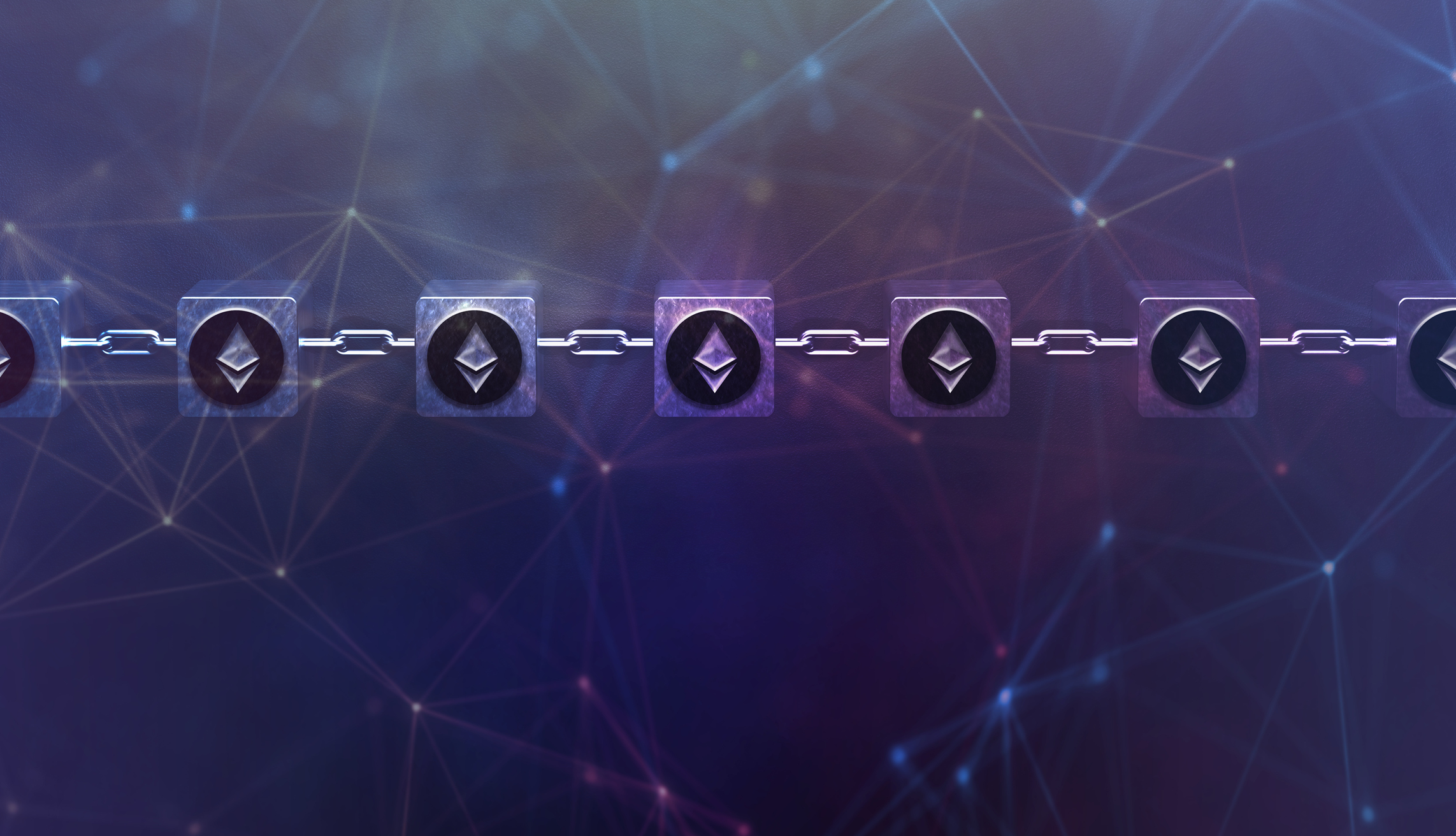 We think late 3Q22 could be the most likely target date for the merge, though a high level of uncertainty remains due to engineering and coordination challenges.

As of April 13, the Ethereum Foundation’s website anticipates an estimated shipping date for the merge of ~3Q22/4Q22, a change from the ~2Q22 target it listed on its previous April 2 update. This would decouple the merge from a difficulty bomb that could start to be felt in late June/July based on block number. (The difficulty bomb was designed as a means of ensuring the transition to a proof-of-stake consensus mechanism by slowing down transaction verifications.) Tim Beiko (a key facilitator for the network’s protocol developer calls) said that the merge would likely take place a “few” months after June.

In our view, Beiko’s comments seem to position the merge to be implemented in late 3Q22. Overall, there seems to be a high level of uncertainty around the target date because of the remaining engineering challenges and the decentralized nature of the project. Moreover, developers need time to notify organizations to make the relevant changes necessary ahead of the upgrade.

Developers have delayed the difficulty bomb five times since 2016 and may have to delay it again if our estimated timeline is correct, as releasing it before the transition would be impractical. This assumes that the delay would take longer than a few weeks, making mining “unbearably slow” by August if the difficulty bomb were initiated.

On the upside, we have seen significant progress from Ethereum’s core developers in recent months including implementation of the Kintsugi testnet (entirely separate from the mainnet) in December 2021 and the Kiln public testnet on March 15, 2022, the last public testnet of its kind before existing testnets will undergo the merge themselves.

This has been followed by a mainnet shadow fork on April 11, a stress test of sorts that spins up nodes separate from the main network and are specifically used to assess the upgrade. This is designed to find issues that might otherwise be missed on the testnets, like the default gas limit setting identified in this iteration, for example. Another shadow fork is scheduled for April 22. 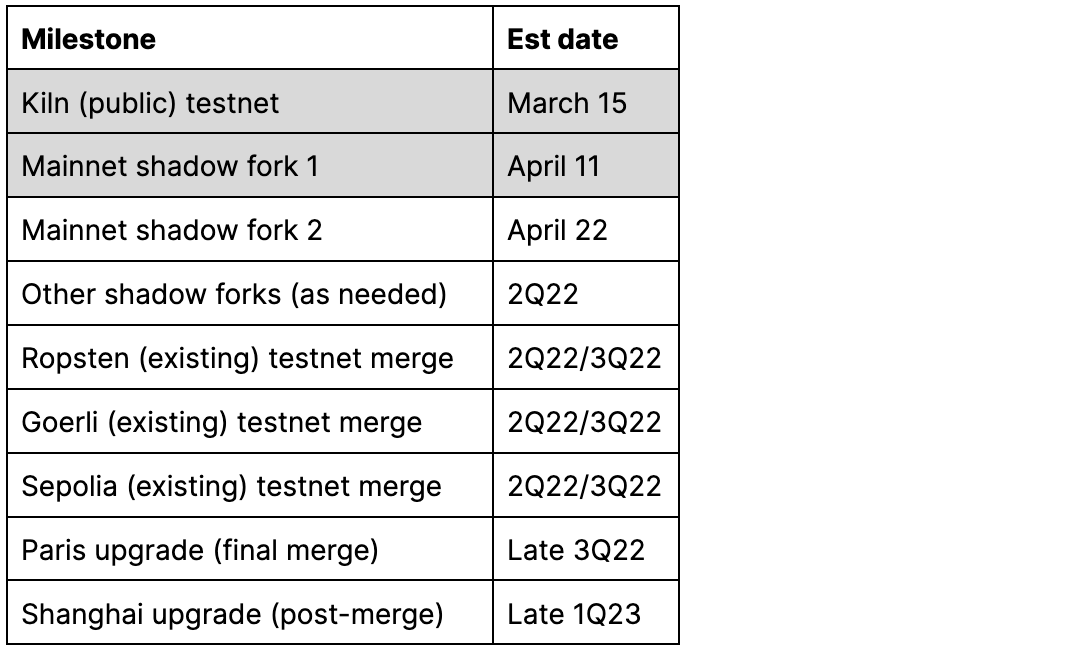 Cumulative testing will then be followed by the Paris upgrade to the mainnet that will actually complete the merge (Ethereum Improvement Protocol EIP-3675.) This will use the total terminal difficulty as the basis of transition rather than the block number (as had been used in previous hard forks.) This is to avoid the risk of forking a malicious chain built and backed by a minority of hash-power.

Importantly, the ability for validators on the network to withdraw staked ETH will not be available immediately after the merge. Staking withdrawals have been proposed in EIP-4895 to be included as part of the Shanghai hard fork, which could take place up to six months after the merge – possibly towards end 1Q23 / early 2Q23, by our estimate. Withdrawals would be considered system-level “operations” rather than the normal user-level transactions, which means they would be included as a new type of object within a block.

Besides staked ETH withdrawals, the Shanghai hard fork is considering six EIPs for inclusion focused on improvements to the Ethereum Virtual Machine (EVM) and smart contract optimization like code validation. 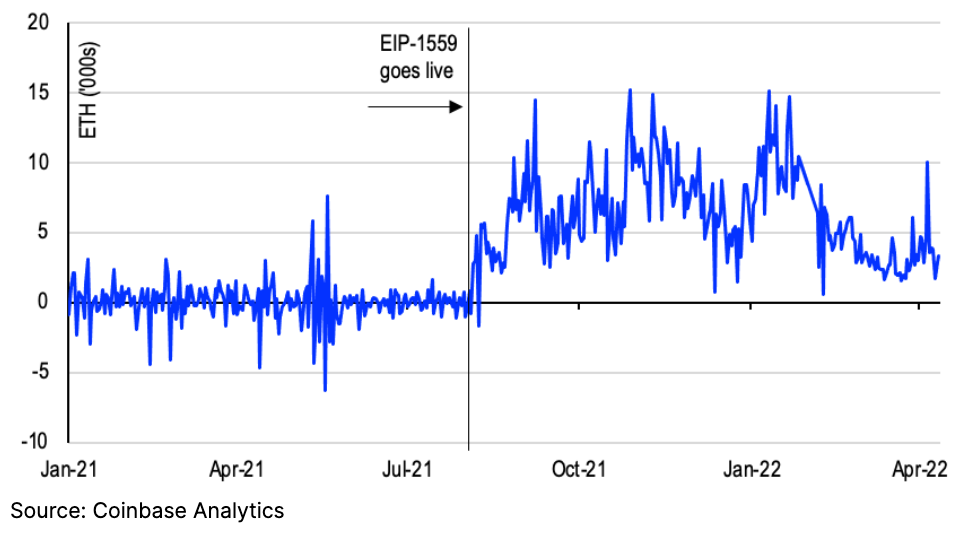 In previous reports, we’ve discussed what the merge represents both in terms of its impact on alternative layer-1 networks as well as its value for validators currently staking on the Beacon Chain. But the merge (and post-merge) timeline remains at best a guess due to the complexity of the protocol upgrade (it’s no small feat to change the consensus model of a network hosting US$117B in total value locked and $367B in ETH) and the decentralized nature of the project, creating challenges for coordination.

At this point, we think late 3Q22 is the most likely target date, representing a delay in the original expectations which may not fully be priced in by the market yet. In our view, the delay will also keep the competition among alt L1s (for market dominance) going. On the other hand, we do not believe this changes the fundamental narrative we had previously discussed in our other Market Intelligence reports regarding the reduction in ETH’s issuance rate and higher staking yields.