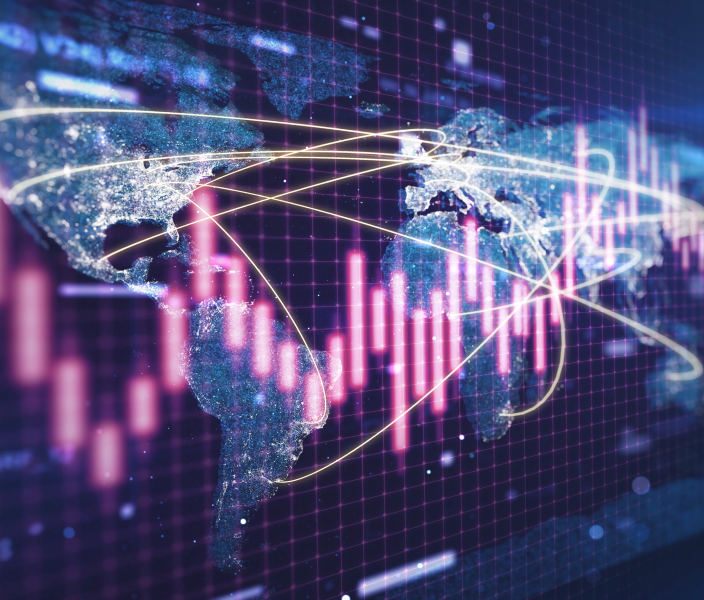 After the merge of Ethereum’s mainnet with the Beacon Chain, we should see ETH staking yields increase as rewards will incorporate net transaction (ex-base) fees currently paid to miners.

We believe staking yields on the Ethereum network can increase from around 4.3-5.4% APR to upwards of 9-12% APR after the merge of the mainet with the Beacon Chain. Current rewards are based on the ETH issued to participants for fulfilling validation duties, but future rewards will include net transaction fees (i.e. excluding the base fee) accounting for the increase in rates.

That said, withdrawals of staked ETH are currently not possible until the network performs an upgrade after the merge. What is the best way to think about valuation for an investor staking their ETH when the principal is locked up for an indefinite period of time?

We look at two different valuation models that utilize staking rewards as either a coupon or dividend to measure the potential value to an investor staking their coins in the network. The first is an annuity or perpetual bond model and the second is a variation of the discounted cash flow (DCF) analysis (two stage dividend discount model.)

Note that this is different from using such methods to forecast the price of ETH, as staking rewards only accrue to the investors staking their tokens, while non-stakers or general ETH holders would not benefit from the increase in ETH supply associated with staking rewards. Moreover, both models have important flaws.

The first model assumes a fixed payment in perpetuity but staking rewards are variable, subject to changes in the effective ETH staking balance among other factors. Meanwhile, DCF models are highly sensitive to growth assumptions about Ethereum’s network.

Currently, the staking yield on Ethereum’s Beacon Chain amounts to around 4.3-5.4% APR based on the ETH issued to reward participants for fulfilling validation duties. By our estimates, the total yield can rise to upwards of 9-12% APR after the merge, once we consider net transaction fees (i.e. the tips paid by network users after the base fee has been burned) which will accrue to validators after the transition to a proof-of-stake (PoS) consensus mechanism, rather than miners under the proof-of-work (PoW) model.

Table 1 shows that the key variable for our estimates  is the total effective ETH balance being staked, which is currently around 9.5M ETH though this has the capacity to grow after the merge. [1] The rewards decline as more ETH are staked, as the base reward is inversely proportional to the square root of the total balance of all validators. We increase the total effective balance by 25% and 50% in scenarios 2 and 3 respectively. Meanwhile, we keep our net transaction fees static across our three scenarios based on their average over the last 6 months post EIP-1559 (see chart 1.) We also assume a constant base reward factor of 64 according to Beacon Chain specifications. 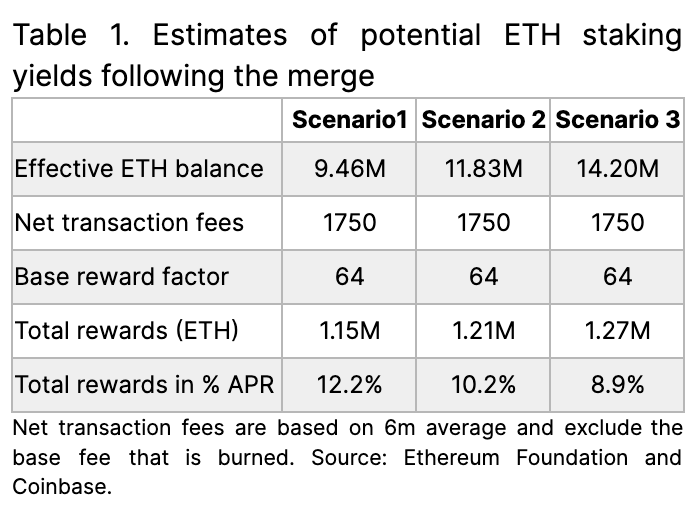 One of the biggest concerns surrounding staking ETH is the lack of visibility on the withdrawal period, which should be sometime after the merge takes place, theoretically in 1H22. For some institutional investors, it can be a challenge to stake ETH holdings without certainty on when they will be able to get it back, even if the yields themselves are attractive. It's possible that these participants have a positive long term view on the asset or they’re assuming that by staking ETH early, they have the first mover advantage on the higher yield. 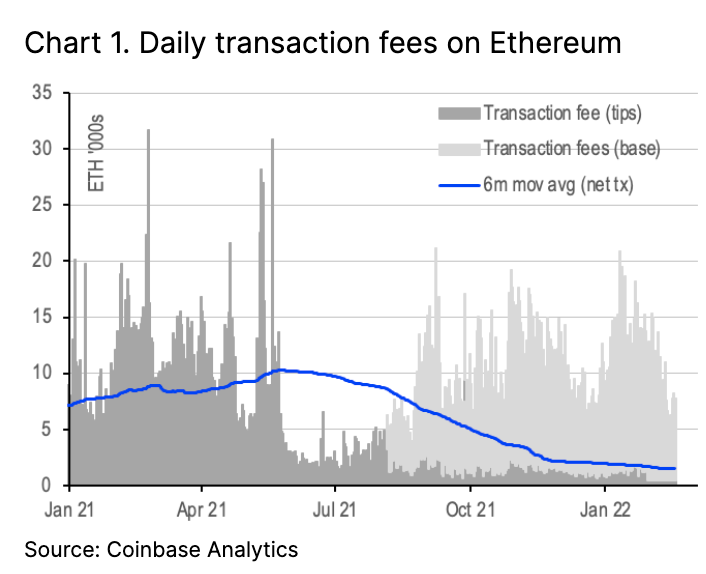 At the moment, 32 ETH could be staked for 4.82% APR which we consider the required rate of return for validating transactions on the network. If we look at this from the lens of an annuity or perpetual bond, where staking ETH entitles the participant to a series of cash flows for an indefinite period (given that we do not know when we will be able to redeem or withdraw the initial ETH investment), one way that we could calculate the equilibrium value for ETH is as follows:

If we take the average ETH price year-to-date (c. US$3000) as our initial value and apply our estimates of staking reward yields from table 1, the discounted estimates would range from $5540 to $7539. However, we think the more likely scenario is that the current effective ETH balance of 9.5M ETH is more likely to increase than stay static. This is because we expect more participants to stake their ETH as we approach the merge since more clarity will likely be given on a potential withdrawal date. (That is, we believe that uncertainty has been an impediment to more people willing to stake their ETH.) As such, we would need to weight values more heavily towards scenarios 2 and 3: 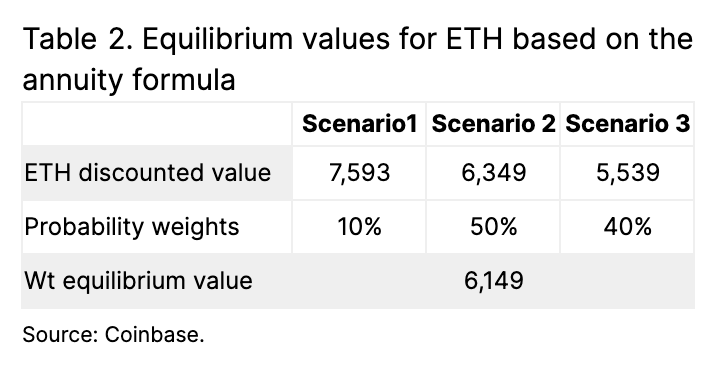 Not an ETH forecast

This gives us a weighted average equilibrium value of $6,149 per ETH, though we would point out that this reflects the potential post-merge value to someone who is staking ETH. It is not a forecast for the digital asset itself because these benefits do not accrue to non-stakers who could potentially be negatively affected by a higher supply of ETH. (Note that forecast models could instead utilize ETH burn rates as a possible benefit that accrues more uniformly to all token holders, but a discussion of the pros and cons of such an approach is beyond the scope of this report.)

Moreover, there are some important flaws with this model. First, the reality is that an infinite stream of payments is beyond the horizon of most investors, and the expectation is that we are months away from the merge after the launch of the Kintsugi Public Testnet in December.

Second, this model assumes that ETH fair value will be based on fixed-rate payments in perpetuity based on our estimates of the staking yield. However, more likely, the staking yield itself will be a variable rate as participants enter and leave over time, possibly reducing but more likely increasing the effective balance of staked ETH. Thus, we think the model should actually incorporate a component to reflect a deceleration in yield over time.

To account for this growth component, we adapt a modified discounted cash flow analysis method known as the two stage dividend discount model Here we use the staking rewards in table 1 as a form of dividend paid to the investor and divide those payments into a high growth period versus a “stable” rewards payment period.

This model calculates the equilibrium value for ETH (again, as a way to estimate the potential value accruing to ETH stakers only) as follows:

Essentially, our calculation takes an initial period of high rewards and sums up all the discounted staking reward payments made during that time n. More specifically, we apply the 12.2% staking yield in scenario 1 discounted back to the present for three months. Once those initial rewards have been factored in, we calculate the present value of the future rewards paid after the third month based on our 8.9% staking yield from scenario 3 and discounted by r, assuming these rewards linearly decline over time by a growth factor of -0.5% (that is, assuming the Ethereum network continues to grow thus reducing the available staking rewards which are inversely proportional to the level of participation.)

Applying these variables to our formula above and assuming r is equal to 4.82%, we estimate an equilibrium value for ETH of $5,050 using this model - less than what we calculated in our annuity / perpetual bond model.

However, the problem is that this DCF model can be highly sensitive to our growth input. For example, if we assume that our rewards remained static during the “stable” period, our estimate would increase to $5,565 in line with the annuity model. This is not an implausible scenario given the competition between Ethereum and alternative L1 networks, which we discussed in “Is ETH 2.0 the Real ETH Killer?”, published 11 January 2022. Making such growth assumptions with any significant confidence can be highly contentious.

The goal of staking tokens under a PoS consensus mechanism is to secure the network in an efficient way, relying on the economic incentives to facilitate the activity on the network. After the merge, rewards paid to staking participants will not only include the ETH issued for validating transactions but also the net transaction fees that are currently being paid out to miners under the PoW framework. However because of the lack of clarity on when staked ETH can be withdrawn, it can be difficult for investors to model its valuation.

Looking to examples from traditional finance, perpetual bonds and discounted cash flow analysis on equities can help formalize some methods for estimating equilibrium values, but ultimately, we think that they are still unable to fully capture the nuances of the asset class. For example, staking yields for ETH can be variable over time as they are sensitive to the growth of effective ETH balances staked on the network. That could be a reflection of economic activity growth on the Ethereum network itself, which can be hard to gauge based on increasing competition with alternative L1 blockchains.


Is ETH 2.0 the real ETH Killer?→
It's cyclical not structural →

1. This is based on the Ethereum Foundation’s model.