We explain how Ethereum is attempting to resolve its scalability problem via layer 2 solutions and what this means for L1s. 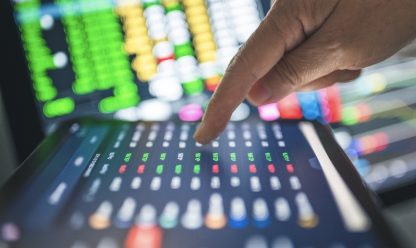 Layer 1 (L1) alternatives have grown in popularity mainly because high gas fees on the Ethereum network have made DeFi related transactions uneconomical, hindering the mass adoption of both ETH as well as smart contract platforms in general.

Gas fees on the Ethereum network have been one of the biggest impediments to the mass adoption of both ETH as well as smart contract platforms in general. This is one reason why layer 1 alternatives like Solana (SOL), Avalanche (AVAX) and Terra (LUNA) attracted significant attention in 2021.

Yet, the majority of active app development across L1 networks still seems to be happening on the Ethereum blockchain with total value locked of US$156 billion across 214 projects – which is almost double the TVL on the next 10 chains combined. This begs the question of how valuable L1 alternatives will ultimately be if ETH 2.0 is able to supplant the current model with a faster and cheaper option.

In our view, there will still be room for multiple chains to coexist in the crypto space for at least a few reasons. First, the timeline for official ETH 2.0 implementation has shifted forward to 2023 (when sharding will be completed) and in the interim, alternative L1s may step in to do what the Ethereum network either takes too long or costs too much to do. That said, the advent of ETH-centric layer 2 solutions (L2s) now plays an outsized role in increasing throughput and reducing fees.

Second, scalability is only one problem affecting networks. At the moment, users or investors may not be focused on issues like maximal extractable value (MEV), but as these ecosystems grow, such problems may warrant changes to the governance mechanisms of L1 chains. Finally, more sophisticated bridging algorithms and improvements in interoperability may facilitate greater composability across different L1 networks in the future.

At its core, ETH 2.0 represents the “set of interconnected upgrades” to the network that allow for scalability without sacrificing decentralization or security in a significant way. [1] Given the pace of decentralized application (dapp) development on the Ethereum blockchain and the high overall growth of the ecosystem, we think ETH 2.0 certainly holds the potential to disrupt and possibly dominate alternative L1s if it can manage lower fees and better network performance.

But many market players tend to conflate the upcoming merge (of Ethereum’s Mainnet with the Beacon Chain) with the actual deployment of ETH 2.0 itself, which is an important misconception. The reality is that the merge will simply transition Ethereum from a proof-of-work (PoW) to a proof-of-stake (PoS) consensus mechanism, but in and of itself, it will do very little for achieving higher speeds, increased throughput or lower gas fees. In fact, fees are driven primarily by demand for block space, so if activity on the network picks up after the merge, fees on the base layer actually have the capacity to rise.

Monetary policy. That doesn’t make the update meaningless, as a change in the consensus mechanism could lead to relevant efficiency gains, especially in terms of monetary policy. For example, it could mean more ETH being staked and less ETH being created (given the transition from miners to validators), reducing the supply on exchanges and thus creating upward pressure on price from a supply-demand perspective.

Note that the pace of ETH issuance is important, as miners have tended to be forced sellers in the past to pay for the operating costs on their equipment. Thus, replacing them with (fewer) validators could reduce ETH issuance by up to 90% and the amount of ETH sold on exchanges by at least 30-50% by our estimate, as less computing power is required compared to PoW (i.e. lower operating expenses means less mandatory ETH selling.) That said, miners’ flows appear to be more directional after EIP-1559 was launched in early August (see chart 1). 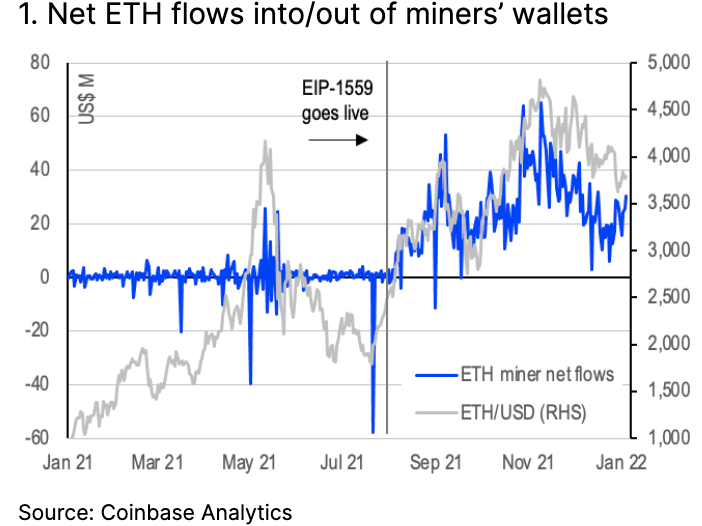 But while the merge could put a higher floor on ETH/USD, there will not likely be vast improvements on performance metrics like speed, scale or cost. What could help such indicators is sharding the Beacon Chain, an upgrade that was originally scheduled for implementation ahead of the merge. But this has been pushed back to 2023. The delay has been driven in part by the success of ETH-centric L2 solutions, which is now the main focus when thinking about scalability.

L2s: The key to scalability

The long term viability of the Ethereum blockchain currently depends on L2 scaling solutions more so than upgrades to the base layer itself, in our view. That is, we believe the growth and adoption of L2 solutions may be the key to determining whether so-called “ETH killers” will be able to challenge Ethereum’s dominance in hosting smart contract platforms, in terms of attracting developers and capital.

Historically, scaling solutions for blockchains have utilized larger block sizes and/or sharding, but experimentation with L2s have introduced new methods of processing transactions more quickly and economically. Chief among these are optimistic and zero-knowledge (ZK) rollups, which bundle transactions together and execute them in a new environment (i.e. off-chain), before sending the updated transaction data back to Ethereum. We have previously discussed these solutions in depth here.

While rollups already reduce fees substantially, the sharding upgrade in 2023 could compound the effect on transaction execution speeds by allowing rollups to take advantage of more block space on Ethereum. This would be crucial for allowing the network to potentially scale to billions of users in the long run, processing tens of thousands of transactions per second. 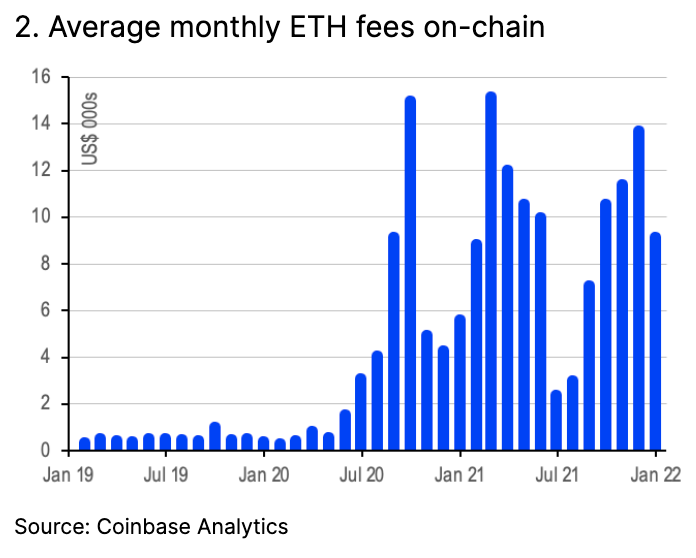 However, L2s are still in their early stages and perhaps not ready for prime time just yet, in our view, which is why L1 alternatives continue to proliferate. For example, users may face meaningful wait times on optimistic rollups when moving funds between the rollup and Ethereum’s base layer in order to scan for fraud. This can take up to a week in some cases and carries latent risk for institutional investors. Meanwhile, ZK rollups still have limitations on the types of transactions they can support.

Living in a multichain world

Ultimately, as the scalability challenges for Ethereum continue to grow, we think traction for L1 alternatives will mainly depend on how quickly we see the emergence of ETH 2.0 and L2 solutions. That is, we could likely see the continued growth of alternate L1 networks in H1 2022 as well as bridges to connect these chains. However, the window of opportunity for L1 alternatives may start to narrow considerably in H2 2022, as we expect ZK proof technology to improve and rollups to gain more widespread use.

But this doesn’t mean that L1 alternatives are going away anytime soon. A multichain world is a very real possibility as we think solving for the scalability trilemma is only the first step in the development of blockchains for smart contract platforms. First, as far as the trilemma is concerned, users may well value the ability to prioritize their L1 options on the basis of speed vs. security vs. decentralization, for example.

Second, other issues are starting to emerge in the crypto space, such as maximal extractable value (MEV) and priority gas auction bots. MEV refers to the profit that miners and validators can extract from others due to their ability to include, exclude, order and re-order transactions in blocks. This has the potential to create issues of front running for both PoW and PoS networks. Issues like this may lend support to blockchains that utilize other consensus mechanisms like proof of history (PoH), which do not rely on a mempool and may thus be potentially more insulated from MEV, as an example.

Third, we are moving away from the concept that composability is facilitated by being locked into one particular network. The development of cross-L1 and L1-L2 bridges allows assets to move across networks in search of higher yields or different pools of liquidity. As interoperability and more sophisticated bridging becomes more prevalent, we could see growth in L1 ecosystems as some dapp developers may not want to compete in crowded markets. Indeed, we could even see newer L1 chains emerge that focus on specific use cases such as gaming or social media.

While we may see Ethereum outperform L1 alternatives ahead of the merge, we would not take this as a signal that ETH 2.0 will crowd out opportunities for development on other networks. That is, we think ETH performance in H1 2022 may be affected mainly by monetary policy – specifically, the reduction of ETH issuance to miners (and thus, ETH sales by miners) due to the transition to PoS. It should not be interpreted as a statement on the blockchain’s viability or cost efficiency, in our view.

However, we do think that the culmination of L2 scaling solutions combined with upgrades like the Beacon Chain merge and sharding could limit progress for alternative L1s in their current form. As ETH scalability improves, dapp users may refrain from looking for faster and cheaper alternatives to Ethereum for example. Nevertheless, we think that there will still be room for multiple chains to coexist in the crypto space in the near term, facilitated by cross-chain interoperability and the possible need for alternative consensus mechanisms.