Blockchain interoperability could be the key to a multichain future, but is still in the early stages of finding a secure solution. Learn how DOT tackles this problem. 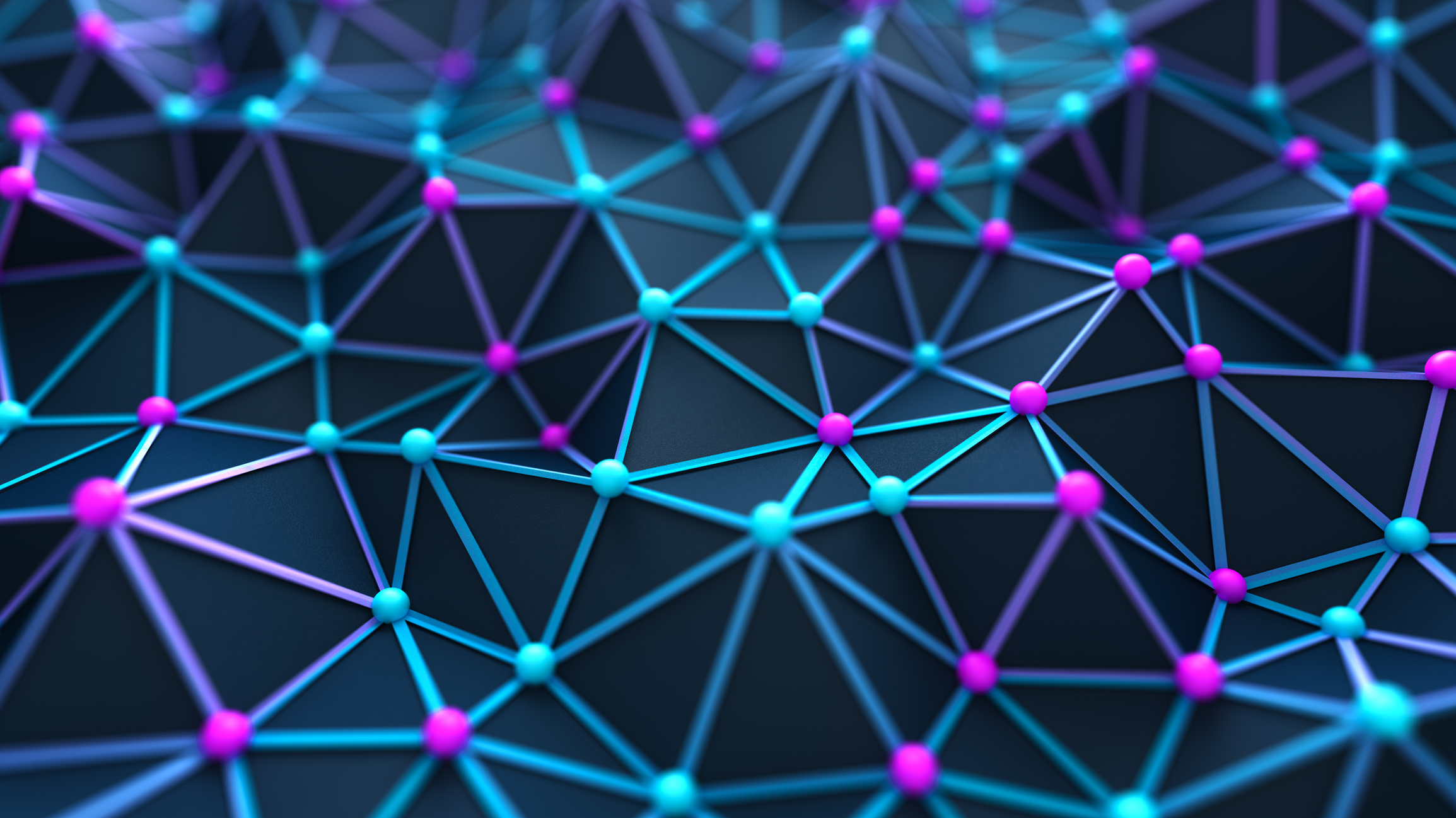 Polkadot is a nominated proof-of-stake (nPoS) blockchain that functions as a network on which users can launch application-specific layer-1s capable of interoperating with one another and secured by a base layer called the relay chain.

Blockchain interoperability could be the key to a multichain future. But the asset class is still in the early stages of finding a secure solution for independent chains to both transfer tokens and share information across networks. Polkadot tackles this problem by using a shared security layer (relay chain) to connect multiple application specific blockchains (parachains) that can communicate with each other.

What’s significant about parachains from a tokenomics perspective is the way the leasing structure affects the lock up of Polkadot’s native DOT tokens directly. To receive a parachain slot, projects need to bid for a lease using DOT, and those tokens subsequently get bonded or locked up for the duration of that lease – i.e. 96 weeks. This directly supports DOT’s circulating supply and inflation rate as parachain slots are awarded (131M DOT bonded as of May 27, 2022).

However, despite the increasing amount of DOT being locked up in recent months, DOT’s market capitalization as a percent of ETH’s has been in continuous decline since early November 2021. In fact, that level is currently 4%, which is close to what it was when Polkadot’s first mainnet launched in May 2020.

Part of the problem has been taxonomy – we think many market players categorize Polkadot as an alternative layer 1 competing with Ethereum, rather than as a layer 0. In part, we believe this is because for a long time, Polkadot lacked the cross-consensus messaging (XCM) capabilities that allow parachains to actually transfer data and tokens among themselves. However, this was finally introduced on May 4, 2022.

Polkadot is a nominated proof-of-stake (nPoS) blockchain that functions as a network on which users can launch application-specific layer-1s. These parallel blockchains (parachains) are capable of interoperating with one another and secured by a base layer called the relay chain.  While individual parachains may have their own native tokens and governance structures, they ultimately rely on the relay chain as the consensus/validation layer. According to a Messari report commissioned by Polkadot, the relay chain can support 100 to 250 parachains.

Effectively, Polkadot operates as a security alliance that allows various parachains to customize their own localized set of rules and logic, while relying on the relay chain to finalize blocks. Independent chains thus have sovereignty over their particular applications but not their own security. However, this is a feature, not a bug - parachains utilize the relay chain for their security but as a result have limited to no control over the approval of state changes.

The native asset of the Polkadot relay chain is DOT, and there is no cap on its overall supply. But its total outstanding supply can be calibrated in three key ways:

Staking is a relatively straightforward concept for PoS networks, which we’ve previously discussed here. However, Polkadot’s structure varies slightly insofar as (1) validators act as the primary active layer engaging in block production while (2) nominators act as the secondary passive layer, earning rewards by assigning their stake to validators. As validator roles are limited, more staking is carried out by nominators. Currently, the annual nominal return for staking is ~15% though the real return is closer to ~5-6%. To exit a nominating or validating stake, the user would need to “unbond” the position, which takes 28 days on Polkadot.

So far, staking has locked up at least half of the total DOT supply (per Polkadot’s supposition that an “ideal staking rate of 50% stabilizes the network”), but above that 50% threshold, the total amount locked up has been variable. That makes it somewhat challenging to exclude staked DOT when calculating the circulating DOT supply. Around 639M DOT (~US$6.2B) are being staked as of May 31, which amounts to 53% of the total outstanding supply according to Polkadot subscan, down from 59% in February (see chart 1.) 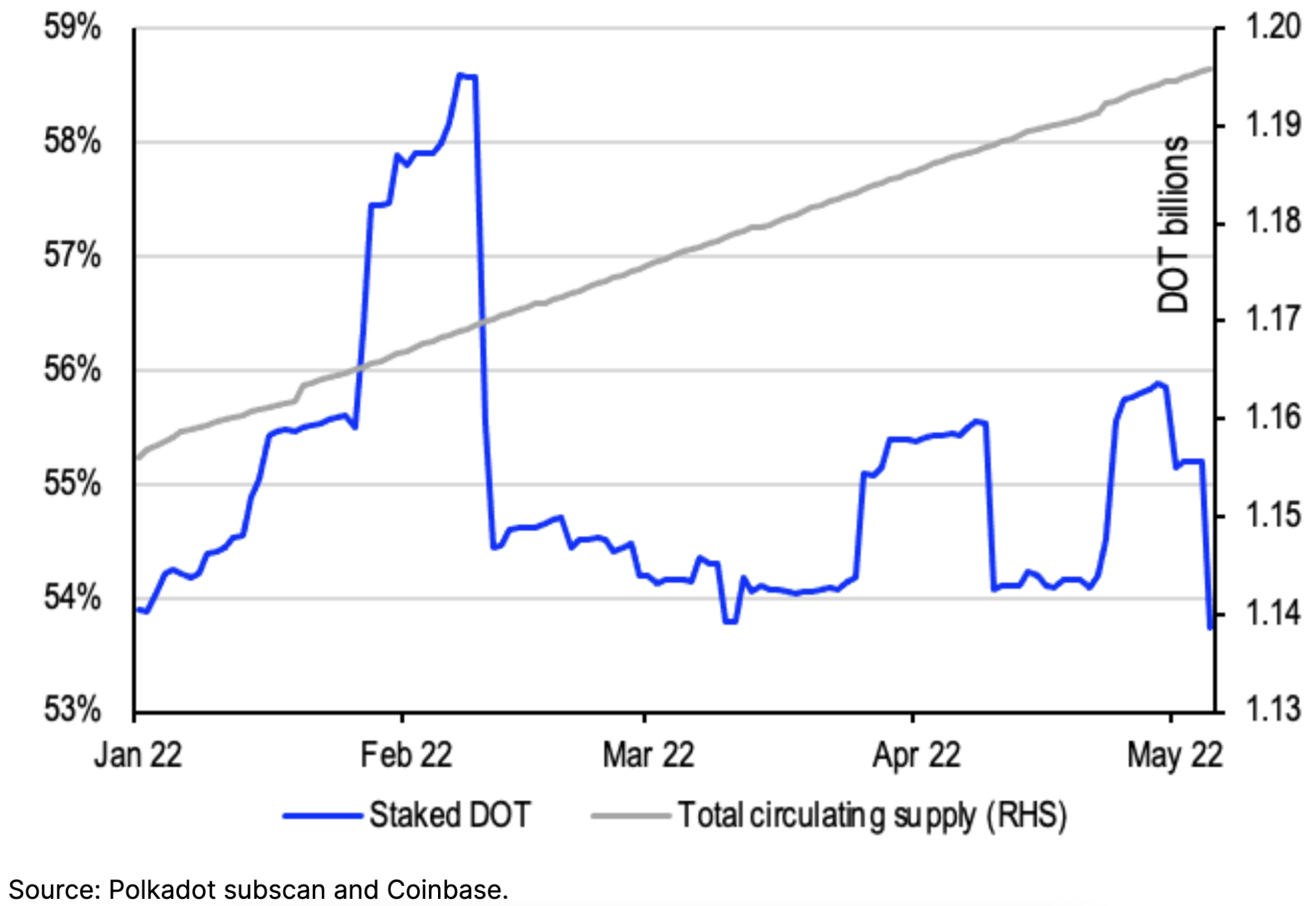 Bonding DOT as part of parachain auctions is a more reliable way of excluding DOT from considerations of circulating supply compared to staking. However, for the moment, far fewer DOT are being bonded than staked. Parachains can be deployed and connected to the relay chain once developers win auctions that are denominated in DOT.

Typically, prospective parachains raise capital in DOT, often via their communities, in exchange for their own native tokens. Once a parachain with the most DOT wins an auction slot, the DOT is locked up or “bonded” for a 96-week lease period (around two-years.) At the conclusion of the lease period, and assuming the lease is not renewed, the lessee's bonded DOT is returned (and they keep the native token of that specific parachain).

2. DOT bonded (locked up) by parachain 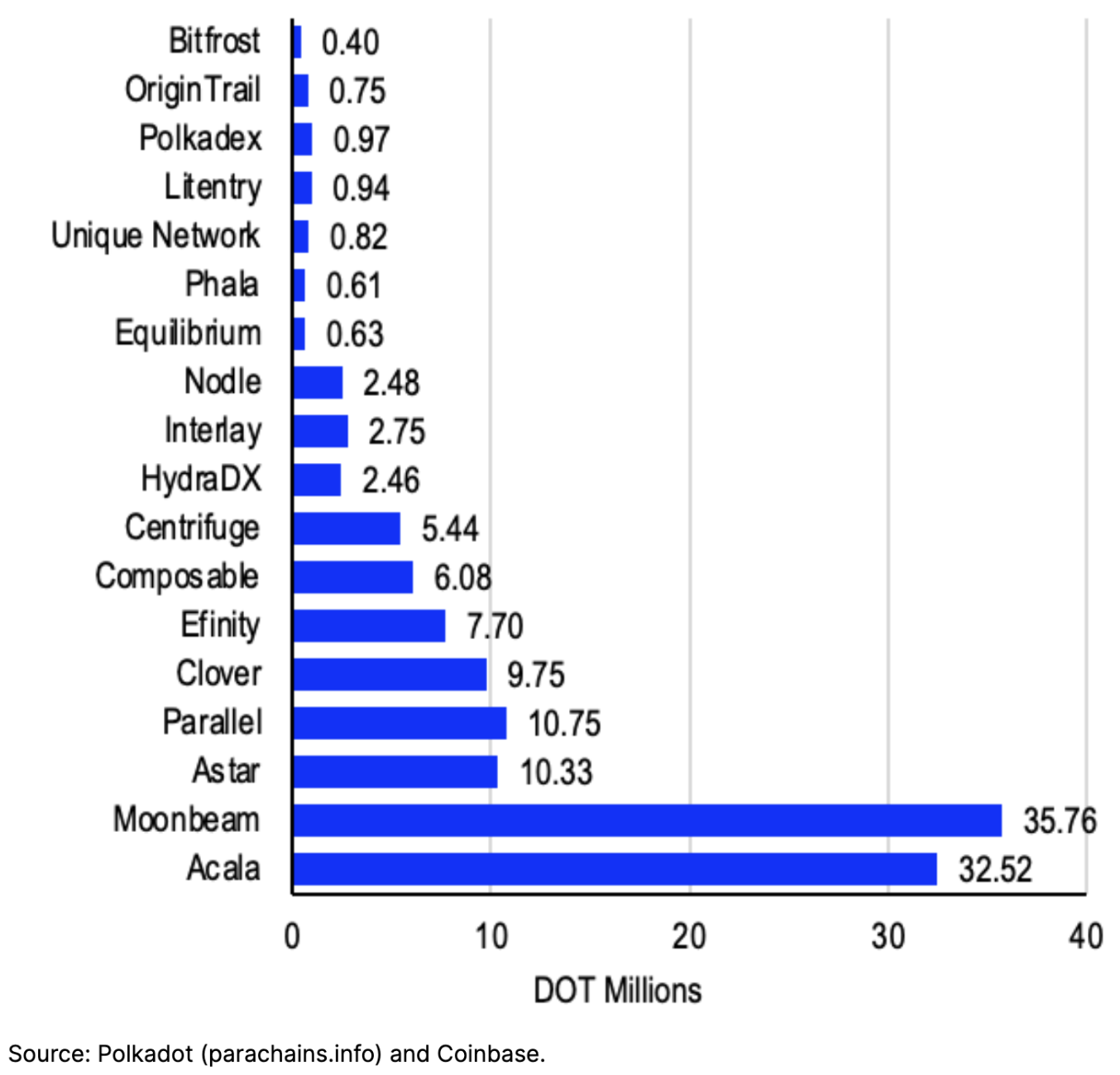 Of these first 18 parachains, eight are decentralized finance (DeFi) chains, three are smart contract platforms, five are Web3 infrastructure chains, one is a blockchain for composable NFTs and one is dedicated to tokenizing real world assets.

It is worth noting that Polkadot seeks to maintain an optimal ratio (at least 10:1) of validators to parachains. Further, all prospective parachains can be initially implemented on Polkadot’s test network, Kusama, to assess their functionality under real economic conditions. (Note that Kusama has a 48 week lease period while the unbonding period for staking is 7 days.) Going forward, Polkadot is focused on onboarding incremental parachains and rolling out a new Cross-Consensus Message Format (XCM) to enable fluent cross-parachain communication, which we discuss more below.

According to Polkadot’s statistics on token supply, the total outstanding DOT supply has been growing at an average linear pace of 0.80% MoM in 2022, which is consistent with their target of ~10% YoY. Note that the rewards paid to validators (i.e. DOT issued) is a function of the amount of DOT staked, directly affecting the inflation rate. That is, with staked DOT representing just over 50% of the outstanding supply, the pace of issuance is aligned with a 10% YoY inflation rate, but that inflation rate increases geometrically if less DOT is staked. 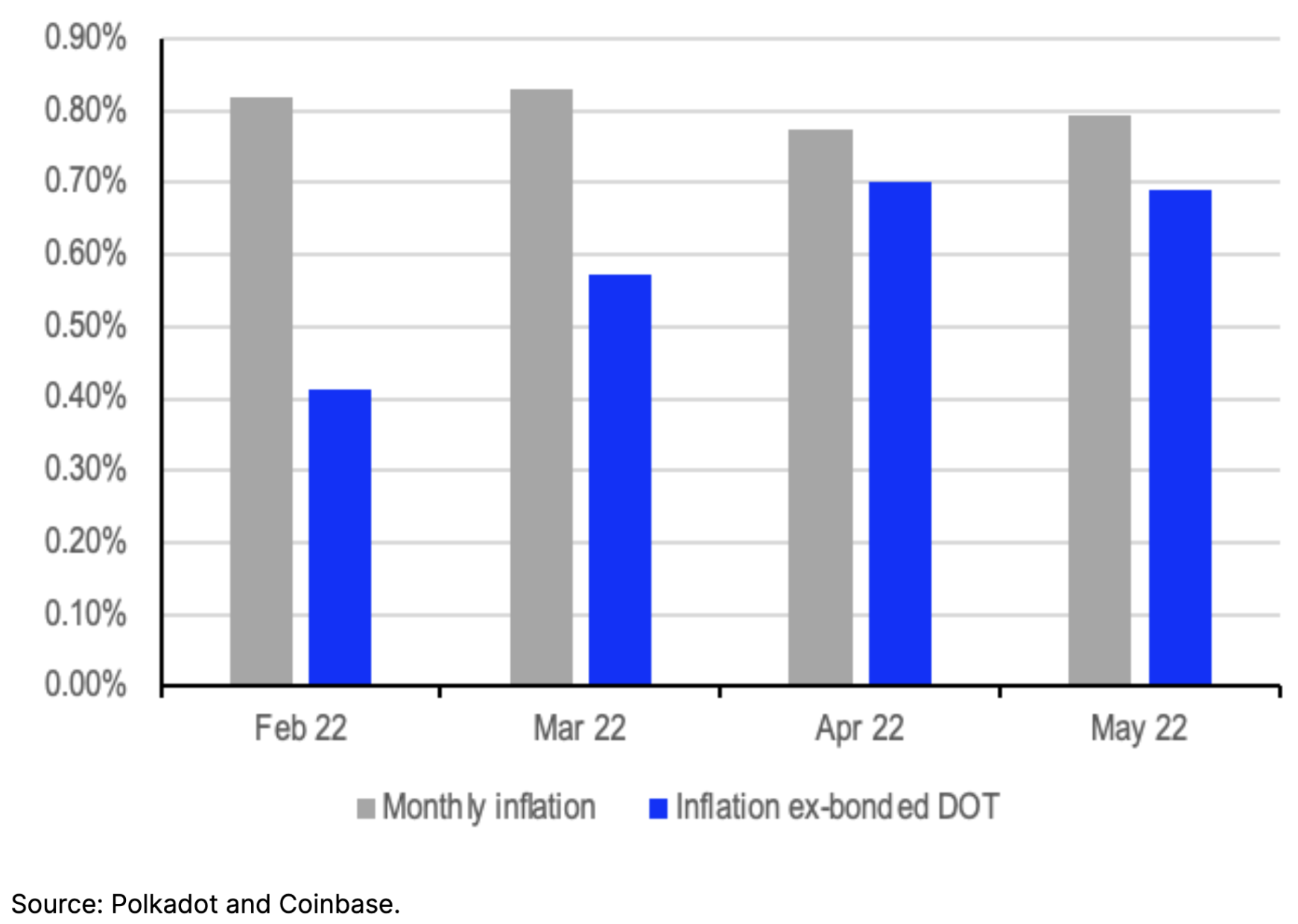 That said, once we consider the effects of bonded DOT due to the parachain auctions (not including staked DOT), the monthly inflation rate comes down to an average of 0.59% MoM over the last five months or an annualized rate of ~7.2% YoY. However, despite the increasing amount of DOT being locked up in recent months, DOT’s market capitalization as a percent of ETH’s has been in continuous decline since early November 2021. In fact, that level is currently 4%, which is close to what it was when Polkadot’s first mainnet launched in May 2020 (see chart 4.) Indeed, despite the positive inflation dynamic created by DOT’s parachain auctions, the adjusted inflation rate is still higher than the current ~4.0% YoY (nominal based on last 12 months) on Ethereum. 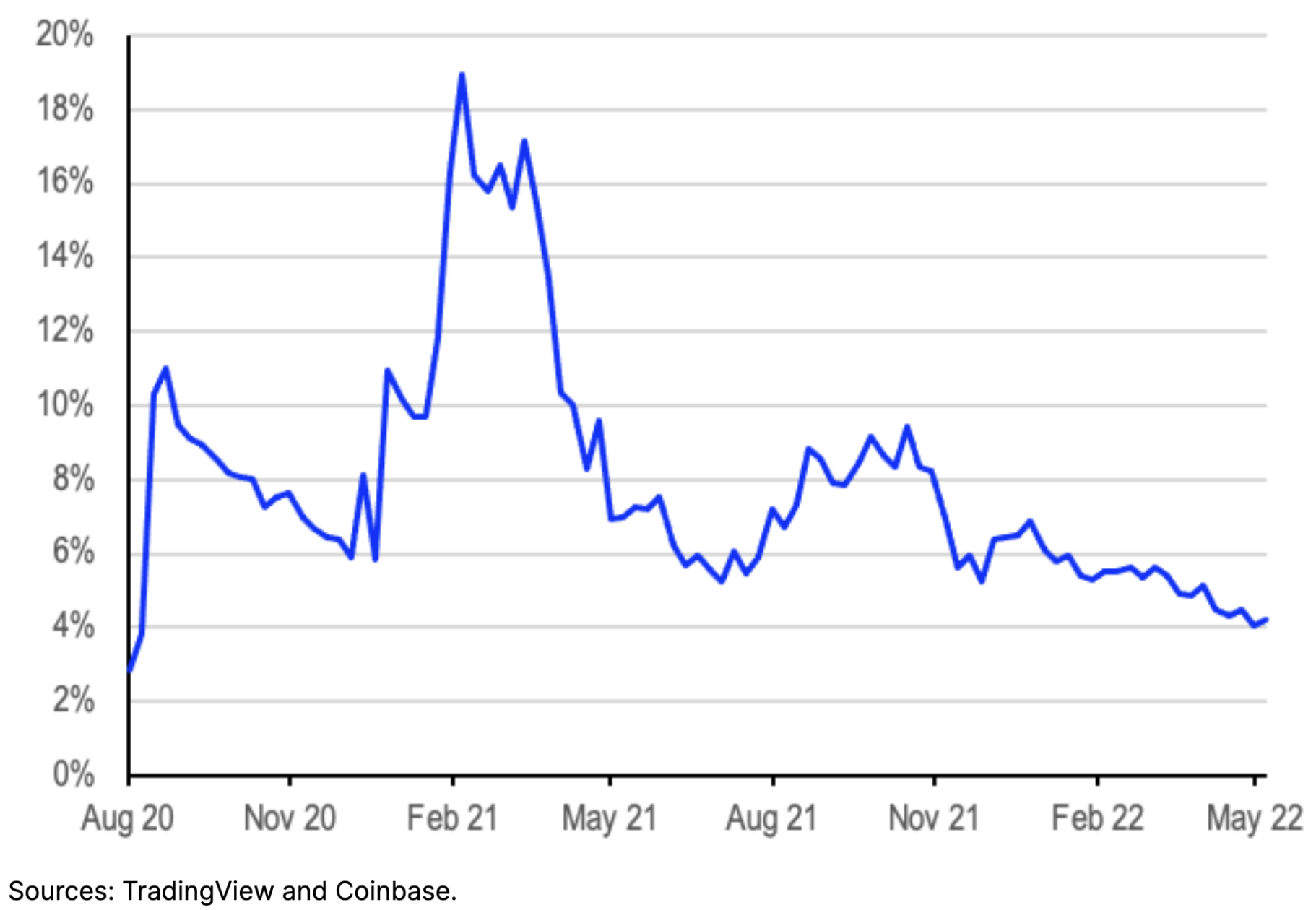 Classification plays an important role in explaining the decline in DOT’s overall market cap relative to Ethereum’s. We believe many market players have categorized Polkadot as an alternative layer 1 competing with Ethereum, rather than as a layer 0 unto itself. From that perspective, DOT’s value can be viewed as proportional to the total value locked of the projects contained within it as opposed to the value of its unique modular structure and cross chain capabilities.

We did see a rise in the total value locked (TVL) of the parachains on Polkadot in the first four months of this year to ~US$1.6B at its peak in April but this was much lower than the size of the TVL locked in alt L1s like Solana or Avalanche. In fact, the TVL on Polkadot still only amounts to around 1% of the TVL on Ethereum’s network (see chart 5.) Note too that this doesn’t include StaFi (Staking Finance), a DeFi project that Polkadot relied on, which saw its TVL fall by 76% in 1Q22.

Moreover, one of the reasons why we believe Polkadot has been viewed more as an alt L1 is that it previously lacked the XCM capabilities that enables parachains to transfer data and assets among one another, in a way that is more secure than bridges because it relies on the primary relay chain. This XCM functionality was only introduced fairly recently on May 4, 2022. Prior to this, developers were constrained by their inability to send DOT to other parachains or even to the relay chain itself. In that sense, we believe the value of interoperable composibility across parachains has not yet been priced into DOT, but that may require seeing the XCM use case proven by current or future parachains that utilize this technology. 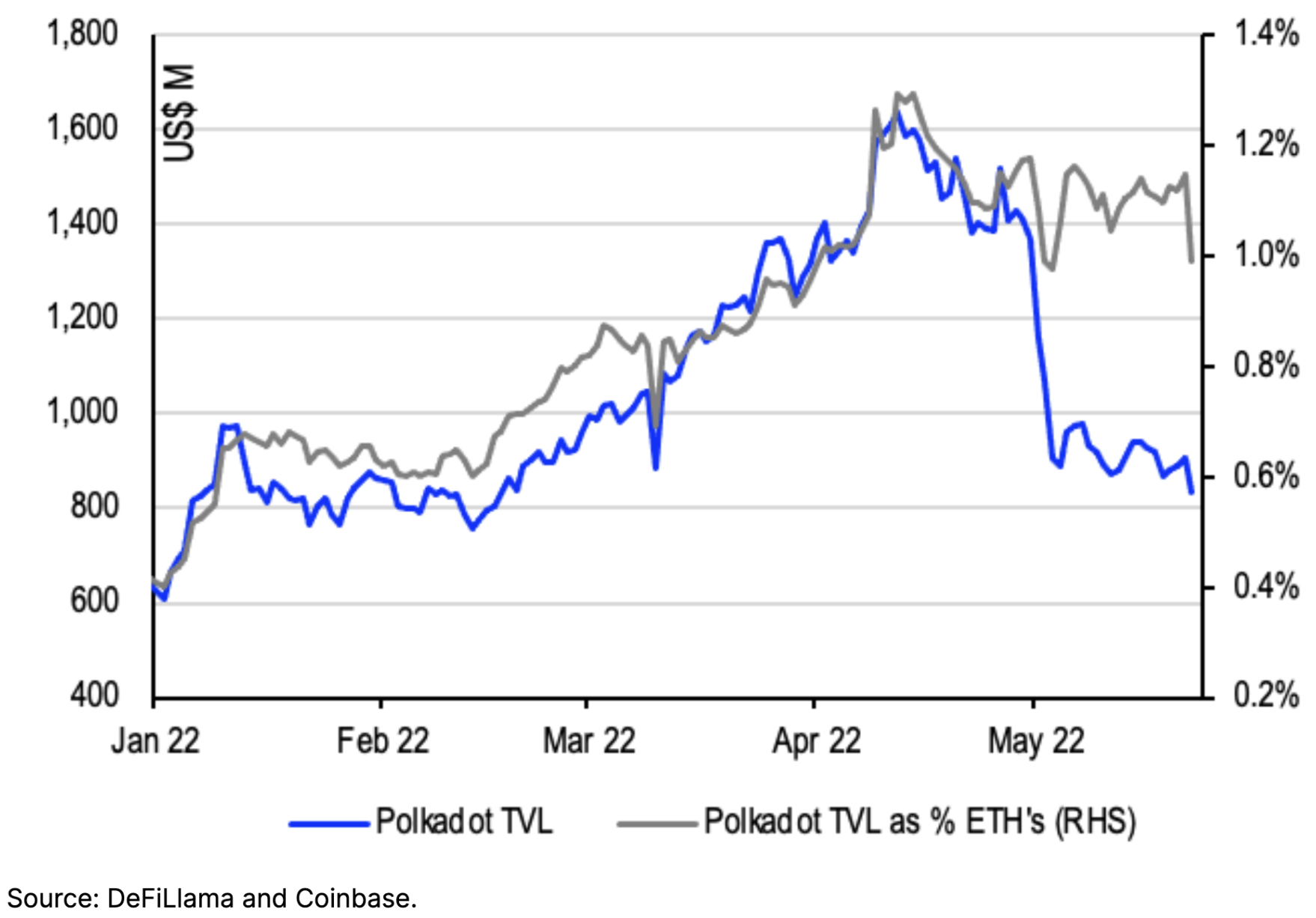 In this report, we were really only able to scratch the surface of Polkadot’s tokenomics. To get a better understanding of DOT’s value, we believe market players also need to understand the tokenomics of each of the parachains being built on the network. Indeed, Electric Capital reported (on January 5, 2022) that Polkadot has 250+ monthly active developers - doubling over the course of 2021 - which puts it among the top five largest developer ecosystems alongside Ethereum, Cosmos, Solana and Bitcoin.

Looking ahead, Polkadot is hosting a “Polkadot Decoded 2022” event on June 29-30, 2022, which could introduce some interesting future developments for the platform based on the preliminary program agenda. Topics appear to be focused on onchain governance, file storage (“​​A New Kind of Decentralized Storage Protocol”) and use cases for interoperability which could be significant for the technology.