Where Web 1.0 was the Static Web, and Web 2.0 is the Social Web, Web 3.0 will be the Decentralized Web. It will move us from a world where communities contribute but don’t own or profit to one where they can through collaboration. By breaking away from traditional business models centered around benefiting the corporation, Web3 foretells the possibility of community-centered economies of scale. This collaborative spirit, and its associated incentive mechanisms, attracts some of the most talented and ambitious developers working in technology today, unlocking projects never previously possible.

Web3, as Ki Chong Tran once said, is “the next major iteration of the Internet, which promises to wrest control from the centralized corporations that today dominate the web.” Web3-enabled collaboration is made possible by decentralized networks that no single entity controls. What might we expect in these nascent developmental stages of a technology that is collaborative instead of competitive?

In closed-source business models, users trust a business’s people to manage funds and execute services. With open-source projects, users trust the technology to perform these tasks. In Web2, the bigger network wins. In Web3, whoever builds the biggest network together wins.

In a decentralized world, not only is participation open to all, the incentive structure is designed so that the more people who participate, the more everybody succeeds.

Linux, the open-source software created in 1991 that is behind a majority of Web2’s websites, was paradigm-shifting for how the Internet (Web2) was developed and provides a clear example of how collaborative processes have the power to drive the future of all technology development. Linux wasn’t developed by an incumbent tech giant, but by a group of volunteer programmers utilizing networked collaboration. Networked collaboration is when autonomous people freely share information without central control, supported instead by code or blockchains.

In The Cathedral And The Bazaar, author Eric S. Raymond shares his observations of the Linux kernel development process and his experiences managing open source projects. During the rise of the Internet, Raymond depicts a time when the popular mindset was to develop complex operating systems carefully coordinated by a small, exclusionary group of people — “cathedrals.” Cathedrals are the traditional corporations and financial institutions, with long releases that take even longer to perfect.

Linux evolved in a completely different way according to Raymond, explaining, “quality was maintained not by rigid standards or autocracy but by the naively simple strategy of releasing every week and getting feedback from hundreds of users within days, creating a sort of Darwinian selection on the mutations introduced by developers. To the amazement of almost everyone, this worked quite well.” This Linux development model, or “bazaar” model as Raymond terms it, assumes that “bugs are generally shallow phenomena” when exposed to an army of hackers without significant coordination.

The open development policy of Linus Torvalds, who conceived the Linux kernel, was far from cathedral-building. Linus’s users were his co-developers. Cultivating a community while leveraging collaboration scales innovation up to a degree of intensity matching the users’ complexity. Linus did a lot of things right, like releasing early and often, growing a beta list of users, sending announcements encouraging participation, and he listened to (and gave credit to) beta testers.

Proof of stake: the collaborative testing ground of Web3

Crypto is a technology model for building projects where the user is centered rather than the companies. The incentives for making something secure and usable are made possible by everyone. One area where every user maintains some level of participation is on proof-of-stake protocols — which are also the fastest growing industry sector. Upgrades to the Ethereum network could turn crypto staking into a $40 billion industry by 2025, according to JPMorgan. With proof of stake, there are levels of participation that prevent the “cathedral” from happening.

Even though there’s a team behind every chain, ultimately, the design of a decentralized network means that they will not have absolute control. At different levels of participation, multiple groups of users play critical roles in harmony with key features like governance and scalability.

As developers transition away from proof of work for greater power efficiency and scalability more protocols will implement a version of proof of stake, in which users stake tokens (cryptocurrency) to run validators for a particular network. Whether service providers or retail users, commercial or institutional, users are incentivized to secure the network by locking up tokens and are rewarded in the form of the network’s native tokens. Validators can be slashed for misbehavior like double signing blocks or downtime. Penalties include loss of existing funds and missing out on future rewards. Staking is your voice, good behavior is encouraged to increase the number of participating users, and the network can flourish securely without the need for centralized control.

Since proof of stake protocols are in relatively early-stage development and are newer than proof of work protocols like Bitcoin, frequent upgrades take place. Operators and co-developers are relied upon for network updates and proposals. For instance, Polkadot, a Web3 platform, is a sharded protocol that enables blockchain networks to operate together seamlessly. Polkadot utilizes user-driven governance to upgrade the network. The loose coordination is “on-chain and enacted autonomously, ensuring that Polkadot’s development reflects the values of the community and avoids stagnation.” When the network sees limitations of current staking parameters, they impose restrictions to ensure the stability of the network. The community changes the terms of service, not the company.

Rewards are the incentive mechanism for people who run nodes, but not every chain draws users for the primary purpose of making a financial return. There needs to be memetics, culture, socialization, and purpose for people to use the network. Blockchains will continue to be abstracted away in Web3. The millions of customers buying NFTs from OpenSea, the first NFT marketplace to pass $1 billion in monthly trading volume, probably don’t care that it supports Polygon, “a popular Layer 2 Ethereum blockchain that boasts a more energy-efficient structure that will allow OpenSea to entirely eliminate gas fees for creators, buyers, and sellers on that blockchain,” according to Techcrunch. Nor do they ultimately care that Degenerate Ape Academy is built on Solana, a proof-of-stake blockchain. The collectors only care about adding rare pictures of cartoon apes to their portfolios. They participate in what offers the memetic value to them that is created by other users on top of the underlying protocol. Unbeknownst to most crypto gamers and art collectors, the more usage there is, the stronger the network becomes. 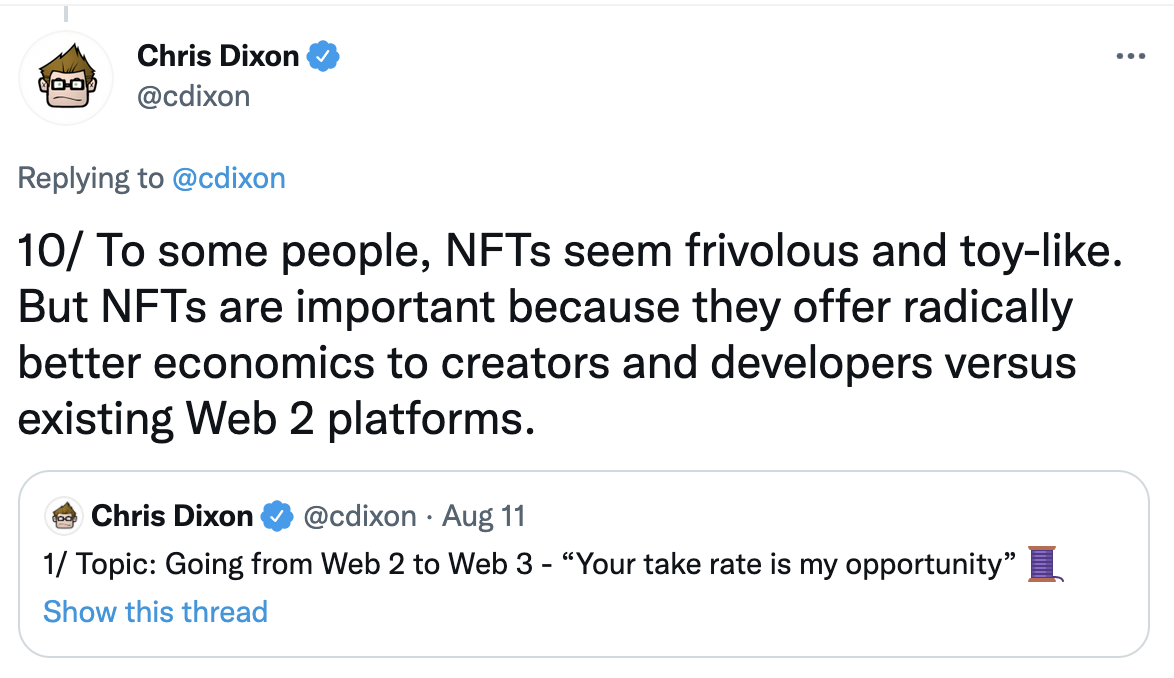 While abstraction might temporarily bring new users into the space, institutional users want to be reassured for the long-term by solid technology, which means, in some cases, the blockchain supports cathedrals. Provenance is a proof-of-stake blockchain network developed by Figure, a home equity line of credit originator, to help financial service industry needs by providing a ledger, registry, and exchange across multiple financial assets and markets. The chain is run and operated by large financial institutions like Franklin Templeton and Caliber Home Loans.

Financial institutions, despite their traditional practices of centralizing control, are incentivized to run nodes because they receive transaction fees. They’re also incentivized to participate because certain aspects of their business are cheaper using Web3 and blockchain technology than through their old Web2 processes. Even as a cathedral, they have unique incentives powered by a proof of stake protocol.

As decentralized teams play less of a role in managing the protocols, the individual participants manage the protocol requiring only minor organization. However, participants will still need to be incentivized to participate in securing, using, and building on the protocol. All of these examples amplify what makes the bazaar and Web3’s networked collaboration so successful — an alliance of autonomous users receiving constant stimulation while working towards a common goal.

In this case, the medium is the blockchain: network that stores, transfers, and exchanges value. As Raymond stated, “Linus was keeping his hackers/users constantly stimulated and rewarded — stimulated by the prospect of having an ego-satisfying piece of the action. Rewarded by the sight of constant (even daily) improvement in their work.”

Linux was a catalyst for the creative thinking that’s manifesting itself in Web3, today and in its exciting future. Cathedrals, however, still exist and it’s unclear if Web2 will fully transition to Web3. How can technology truly belong to the people and Web3 be wholly driven by networked collaboration? Does it have to be zero-sum? It’s a leap of faith. Cathedrals that enable rent-seeking behavior, and are so ingrained in Web2 economic and business models, will need to continue to embrace the bazaar, bending towards how these communities work from the bottom-up, not top-down.

Web3 might not be the final answer, but it’s the current iteration, and innovation isn’t always obvious in the beginning. Loot “started with lists of fictional gear, aided by ample decentralized imagination.” As long as talented builders are incentivized to collaborate, Web3 can open up a whole new world we’ve never dreamed possible.

The bazaar model partially remade the commercial software world in its image like crypto’s networked collaboration will inevitably do to traditional business models. Centralized organizations will not win without embracing decentralization to some degree, and those that do will be decades ahead of their competition while possibly doing some good.

Networked collaboration harnesses the brainpower of communities and has plausible promise. We’ve seen an explosion of interest in crypto that continues to parallel, if not follow, the principles laid out by Linus Torvalds. The future of the Internet will belong to the “people who leave behind the cathedral and embrace the bazaar.”

This article was originally published in TechCrunch.