While building our data team at Coinbase, I have found the following question to be the most insightful:

How would you describe yourself as a histogram?

In 2012, Harvard Business Review described Data Scientist as the sexiest job of 21st century. However, the term data scientist has evolved a lot over the past few years, to the extent that everyone seems to have a different definition of the role. Data professionals come from a variety of backgrounds. On one end of the spectrum, there are people with advanced quantitative degrees who picked up some programming skills. On the other end, there are software engineers who taught themselves stats and machine learning. Given the diverse backgrounds of everyone in the data field, I realized this question really allowed me to understand their strengths and interests:

How would you describe yourself as a histogram, with the following skills on the x-axis: SQL, statistics, machine learning, backend services and distributed computing? More specifically, you have 100 points that you have to distribute across these skills.

Based on the scores that candidates provide themselves on this histogram, it becomes quickly obvious what their persona is, and thereby what role could they most successfully fill within our data team: 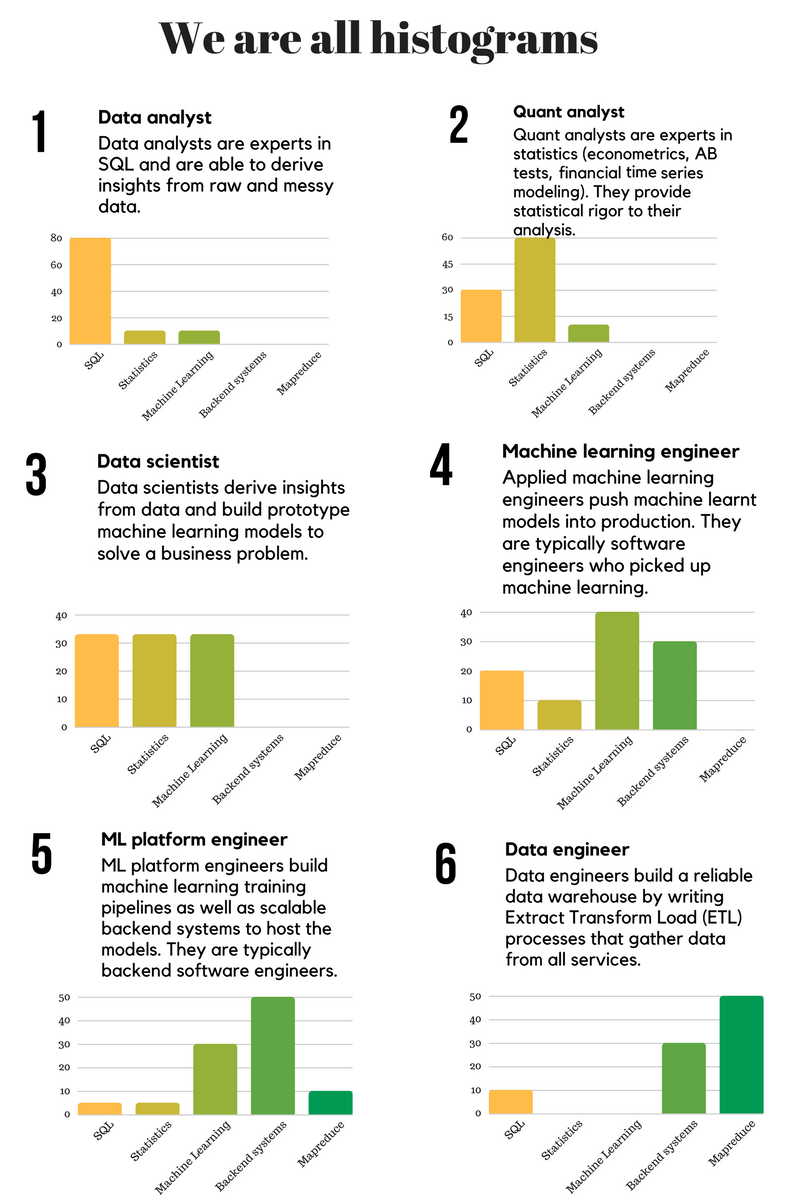 Typical responsibilities of each data persona

To make this more concrete, I want to provide a view into the type of work that each of those data personas perform at Coinbase.

That’s the follow-up question I ask to determine how should I help them with their career progression at Coinbase. This could for example look like: data analysts who want to move into data engineering or data engineers who want to move into machine learning. This helps determine future projects that we could offer them so that they can learn the skill sets needed while doing those projects.

If you liked this article, we’d love to hear in comments about the data persona you would use to describe yourself as well as any feedback on whether you found this hiring rubric useful or not.

Coinbase is hiring across the board in the data team for each of those data personas. So if you are interested in using data to create the next open financial network for the world that’s powered by cryptocurrencies, we look forward to hearing from you!

The links in this blog post are being provided as a convenience and for informational purposes only; they do not constitute an endorsement or an approval by Coinbase of any of the content or views expressed by or on any external site. Coinbase bears no responsibility for the accuracy, legality or content of the external site or for that of subsequent links. Contact the external site for answers to questions regarding its content.

PS: Thanks to Michael Rousseas, Tom Boice, Jeremy Henrickson and Balaji S. Srinivasan, for their feedback on this article. Thanks to Charles Humble, Wesley Reisz for hosting me on a Qcon.ai panel where we discussed this topic that served as an inspiration for this post.