At Coinbase, we ingest billions of events daily from user, application, and crypto sources across our products. Clickstream data is collected via web and mobile clients and ingested into Kafka using a home-grown Ruby and Golang SDK. In addition, Change Data Capture (CDC) streams from a variety of databases are powered via Kafka Connect. One major consumer of these Kafka messages is our data ETL pipeline, which transmits data to our data warehouse (Snowflake) for further analysis by our Data Science and Data Analyst teams. Moreover, internal services across the company (like our Prime Brokerage and real time Inventory Drift products) rely on our Kafka cluster for running mission-critical, low-latency (sub 10 msec) applications.

With AWS-managed Kafka (MSK), our team has mitigated the day-to-day Kafka operational overhead of broker maintenance and recovery, allowing us to concentrate our engineering time on core business demands. We have found scaling up/out Kafka clusters and upgrading brokers to the latest Kafka version simple and safe with MSK. This post outlines our core architecture and the complete tooling ecosystem we’ve developed around MSK. 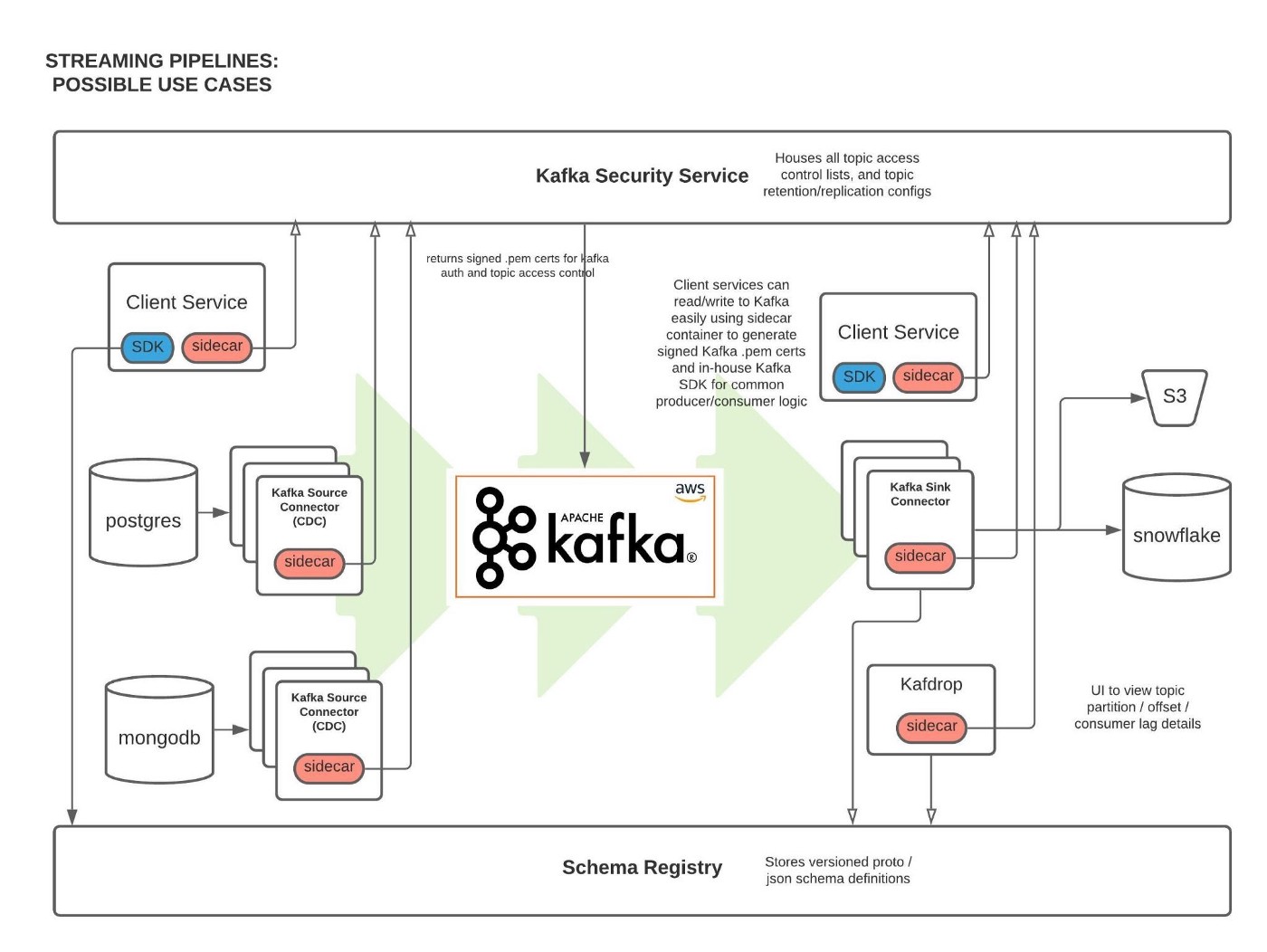 Configuration and Benefits of MSK

Since MSK is AWS managed, one of the biggest benefits is that we’re able to avoid having internal engineers actively maintain ZooKeeper / broker nodes. This has saved us 100+ hours of engineering work as AWS handles all broker security patch updates, node recovery, and Kafka version upgrades in a seamless manner. All broker updates are done in a rolling fashion (one broker node is updated at a time), so no user read/write operations are impacted.

We reduced our end-to-end (e2e) latency (time taken to produce, store, and consume an event) by ~95% when switching from Kinesis (~200 msec e2e latency) to Kafka (<10msec e2e latency). Our Kafka stack’s p50 e2e latency for payloads up to 100KB averages <10 msec (in-line with LinkedIn as a benchmark, the company originally behind Kafka). This opens doors for ultra low latency applications like our Prime Brokerage service. Full latency breakdown from stress tests on our prod cluster, by payload size, presented below:

KSS also signs Certificate Signing Requests (CSRs) using the AWS ACM API. To do this, we leverage our internal Service-to-Service authentication (S2S) framework, which gives us a trustworthy service_id from the client; We then use that service_id and add it as the Distinguished Name in the signed certificate we return to the user.

With a signed certificate, having the Distinguished Name matching one’s service_id, MSK can easily detect via TLS auth whether a given service should be allowed to read/write from a particular topic. If the service is not allowed (according to our acl.yml file and ACLs set in ZooKeeper) to perform a given action, an error will occur on the client side and no Kafka read/write operations will occur.

Parallel to KSS, we built a custom Kafka sidecar Docker container that: 1) Plugs simply into one’s existing docker-compose file 2) Auto-generates CSRs on bootup and calls KSS to get signed certs, and 3) Stores credentials in a Docker shared volume on user’s service, which can be used when instantiating a Kafka producer / consumer client so TLS auth can occur.

This is a distributed cluster of EC2 nodes (AWS autoscaling group) that performs Change Data Capture (CDC) on a variety of database systems. Currently, we’re leveraging the MongoDB, Snowflake, S3, and Postgres source/sink connectors. Many other connectors are available open-source through Confluent here

This is another open-source project, which provides automatic partition rebalancing to keep our cluster load / disk space even across all broker nodes: source code here

Critical to our streaming stack is a custom Golang Kafka SDK developed internally, based on the segmentio/kafka release. The internal SDK is integrated with our Schema Registry so that proto definitions are automatically registered / updated on producer writes. Moreover, the SDK gives users the following benefits out of the box: 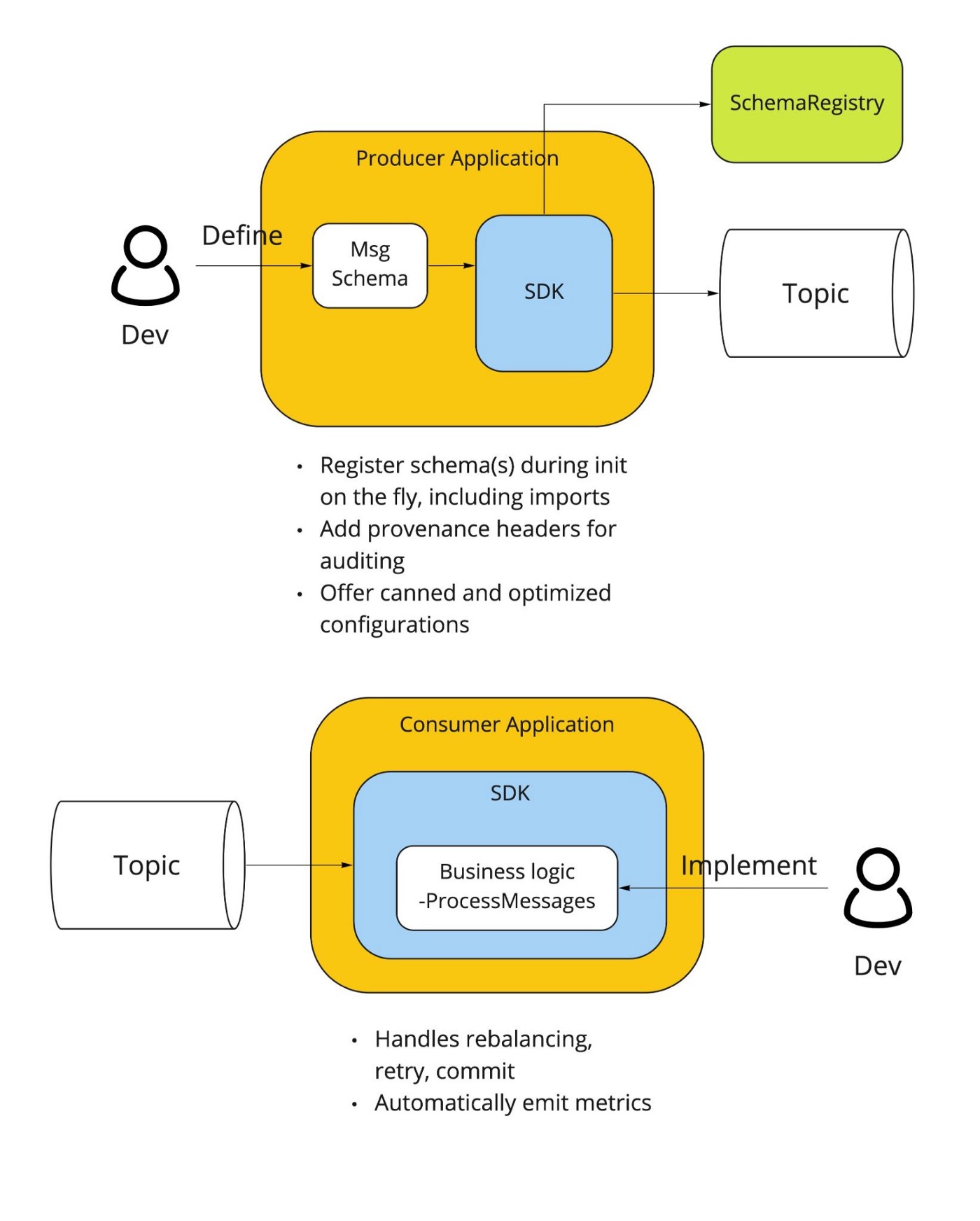 Beyond Kafka, we may still need to make use of other streaming solutions, including Kinesis, SNS, and SQS. We introduced a unified Streaming-SDK to address the following requirements:

On the horizon is integration with our Delta Lake which will fuel more performant, timely data ETLs for our data analyst and data science teams. Beyond that, we have the capacity to 3x the number of broker nodes in our prod cluster (30 -> 90 nodes) as internal demand increases — that is a soft limit which can be increased via an AWS support ticket.

Overall, we’ve been quite pleased with AWS MSK. The automatic broker recovery during security patches, maintenance, and Kafka version upgrades along with the advanced broker / topic level monitoring metrics around disk space usage / broker CPU, have saved us hundreds of hours provisioning and maintaining broker and ZooKeeper nodes on our own. Integration with Terraform has made initial cluster configuration, deployment, and configuration updates relatively painless (use 3AZs for your cluster to make it more resilient and prevent impact from a full-AZ outage).

Performance has exceeded expectations, with sub 10msec latencies opening doors for ultra high-speed applications. Uptime of the cluster has been sound, surpassing the 99.9% SLA given by AWS. Moreover, when any security patches take place, it’s always done in a rolling broker fashion, so no read/write operations are impacted (set default topic replication factor to 3, so that min in-sync replicas is 2 even with node failure).

We’ve found building on top of MSK highly extensible having integrated Kafka Connect, Confluent Schema Registry, Kafdrop, Cruise Control, and more without issue. Ultimately, MSK has been beneficial for both our engineers maintaining the system (less overhead maintaining nodes) and unlocking our internal users and services with the power of ultra-low latency data streaming.