Around the Block from Coinbase Ventures sheds light on key trends in crypto. Written by Connor Dempsey

There’s a gravitational shift taking place within our industry. Since Russia’s shocking invasion of Ukraine, crypto has been:

At this point, one thing is clear: this technology is a major emerging force in the geopolitical landscape. In this edition of Around The Block, we examine crypto in a geopolitical context, along with the difficult questions the world is asking.

An email address for money

In the aftermath of Russia’s attack on Ukraine, crypto’s power for coordinating economic activity was put on full display once the official Ukrainian twitter account tweeted out a plea for aid, accompanied with two long strings of letters and digits. 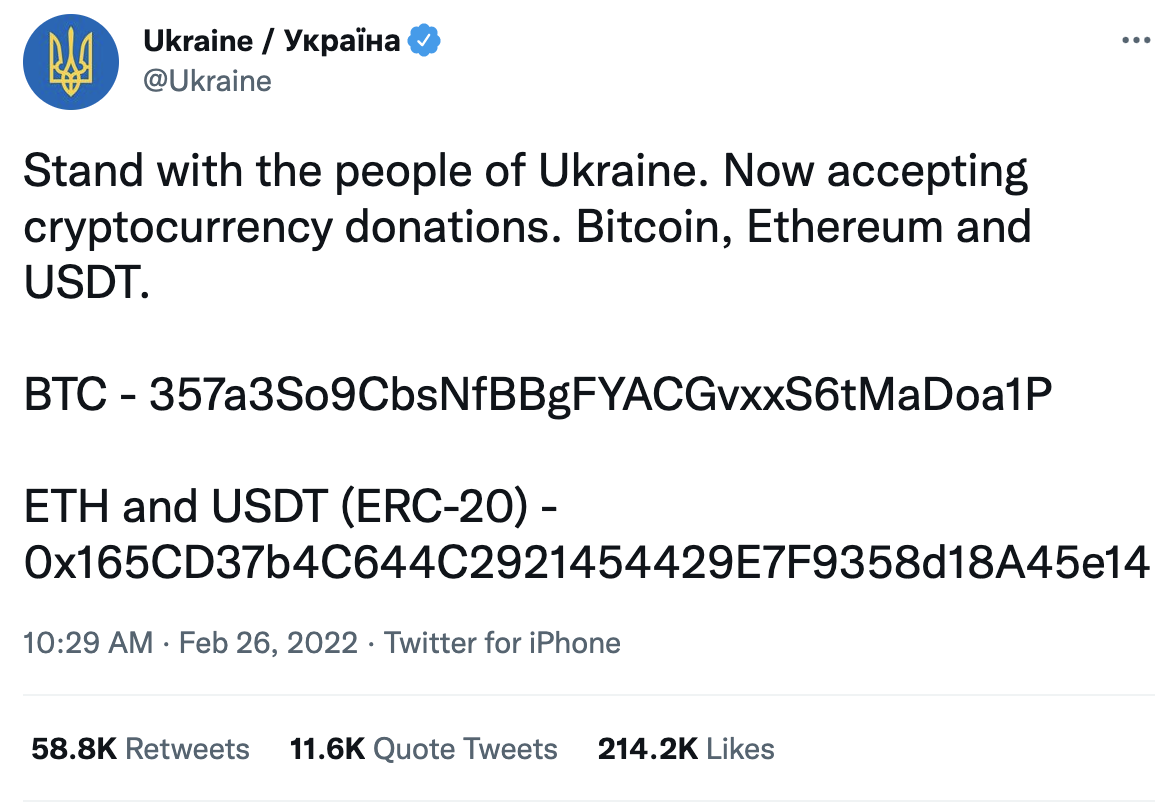 These long strings of characters were the Bitcoin and Ethereum addresses of the Ukrainian government, and the tweet represents the first time a nation state has ever sought aid directly in crypto. At a time when the Ukrainian government and banking sites were being flooded with DDoS (denial of service) attacks, and crowdfunding platforms were deplatforming organizations raising aid for Ukraine, the utility of permissionless, borderless networks for sending money was vividly illustrated.

At this time of writing, the Ukrainian government has collected over $50M in Bitcoin, ETH, ERC-20 stablecoins, and in other assets like DOT, DAI, and even Dogecoin. 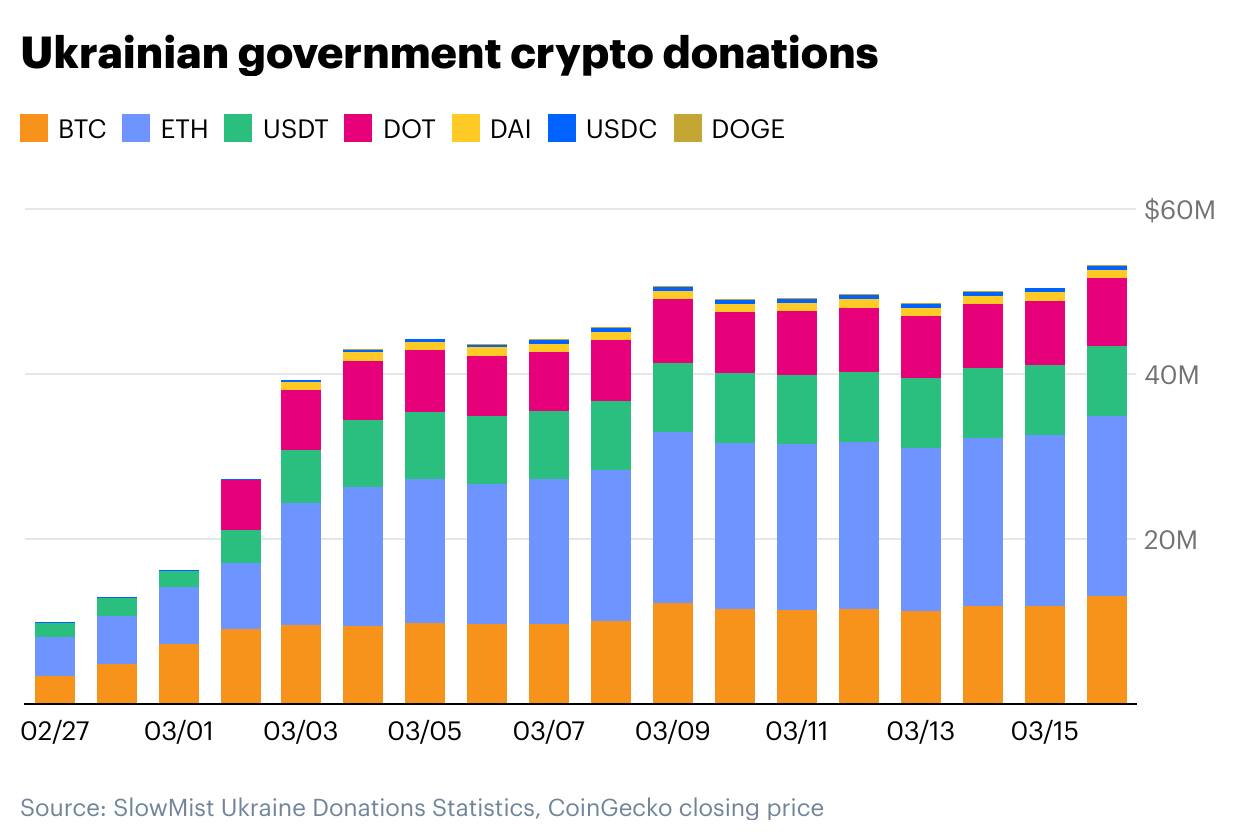 The Ukrainian government has said that it has been using the funds to buy military supplies including bullet-proof vests, drones, gasoline, and night vision goggles. What’s more interesting is that 40% of suppliers have accepted payment in crypto.

Many have pointed out the oddity of private citizens from around the world essentially crowdfunding a war effort. Yet another sign of just how unprecedented all of this is.

Fungible crypto assets weren’t the only donations to pour into the Ukrainian government’s crypto wallet. NFT enthusiasts also answered the call, donating over 200 pieces of digital art work and even ENS addresses. Most notably, a rare CryptoPunk worth an estimated $200,000 was donated. 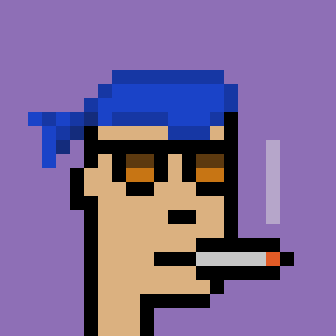 What’s interesting is that since the ownership provenance of the CryptoPunk will forever be associated with the defense of Ukraine, this added historical significance could raise its value over the long term.

The NFT aid didn’t stop there, as they were also combined with another crypto primitive to support the defense of Ukraine: DAOs.

Decentralized autonomous organizations were cast into the limelight last year after ConstitutionDAO crowdsourced $40M in under a week in a bid to buy one of the original copies of the US Constitution. While the bid ultimately failed, it underscored the power that these software enabled organizations have for coordinating economic activity at the speed of the internet.

After a Ukrainian NGO (non-government organization) supporting the war effort called Come Back Alive was de-platformed from crowdfunding platform Patreon for supporting military activity, they also turned to crypto. Shortly thereafter, UkraineDAO was created to help support this NGO.

The DAO minted a 1:1 NFT of the Ukrainian flag and put it up on PartyBid, which allows groups to pool funds to buy NFTs. In essence, the DAO created its own NFT, crowdsourced as much money as they could to buy it from themselves and then donated the proceeds to Come Back Alive. All told, they raised $6.7M. They also distributed commemorative “valueless” tokens called LOVE to those who donated. 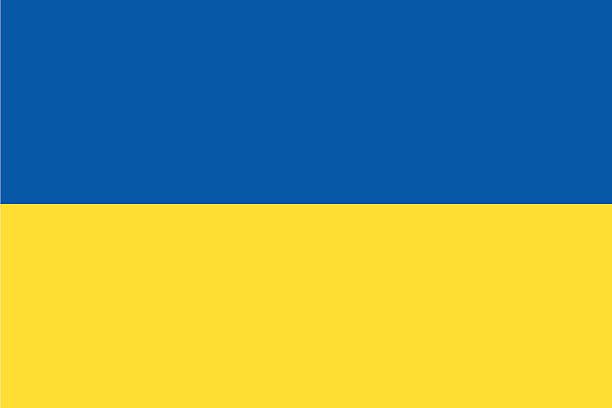 Crypto on the main stage

Between the Ukrainian government and various NGOs, over $80M and counting in aid has been raised. While in the grand scheme of things this amount is a nominal sum not likely to turn the tides of war, it’s also far from insignificant. The sum represents over 20% of the $350M pledged by the Biden administration and is a powerful display of the promise that decentralized, borderless money holds. 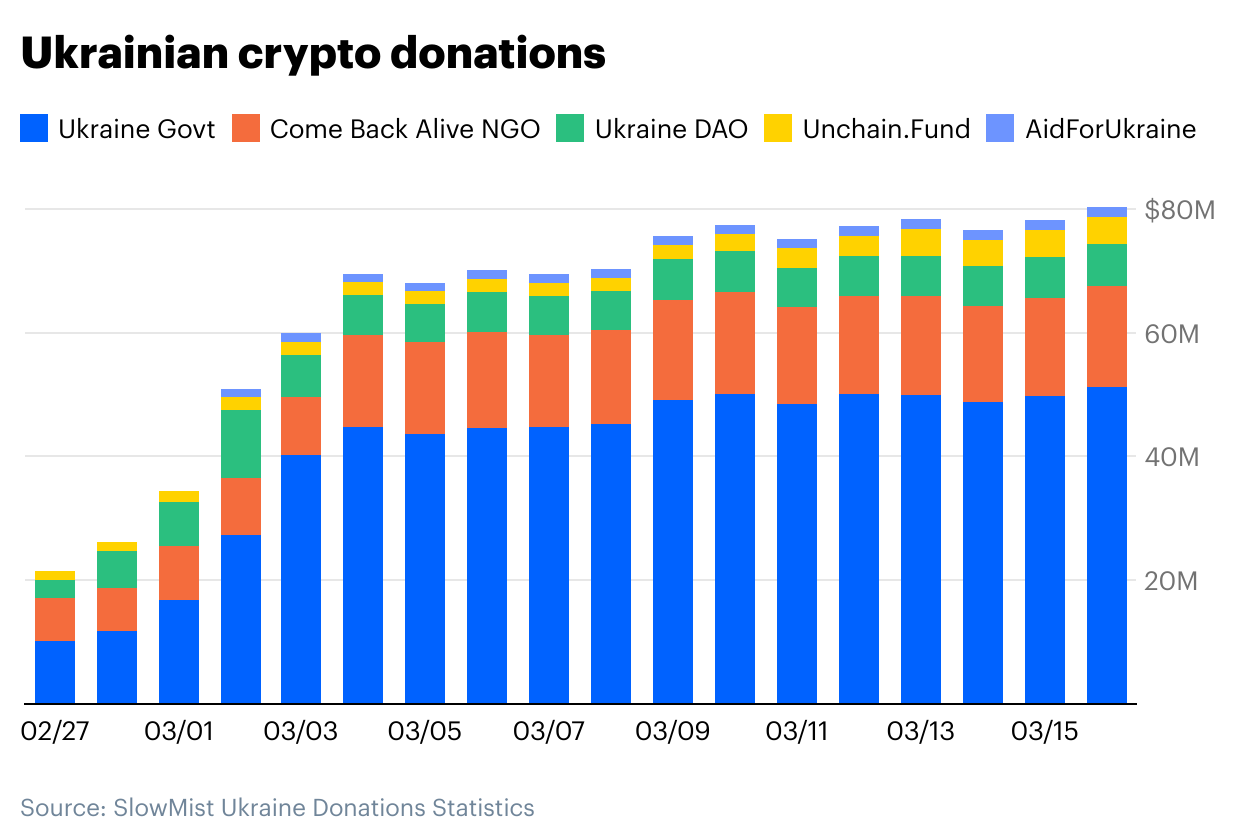 Slowmist, where we’re pulling this data, also noted that when you factor in other organizations and cryptocurrencies they’re not tracking, the full figure is likely over $100M. The Giving Block, for example, raised over $2.3M in crypto donations for over 20 non-profits supporting Ukrainian relief.

Beyond support of the Ukrainian government and organizations, crypto has also proven useful for individual Ukrainians affected by the crisis. One Ukrainian who fled to Kazakhstan reported that he lost access to his savings and that his credit cards were no longer functioning, leaving crypto as his only financial life raft: yet another example of the utility of permissionless finance. 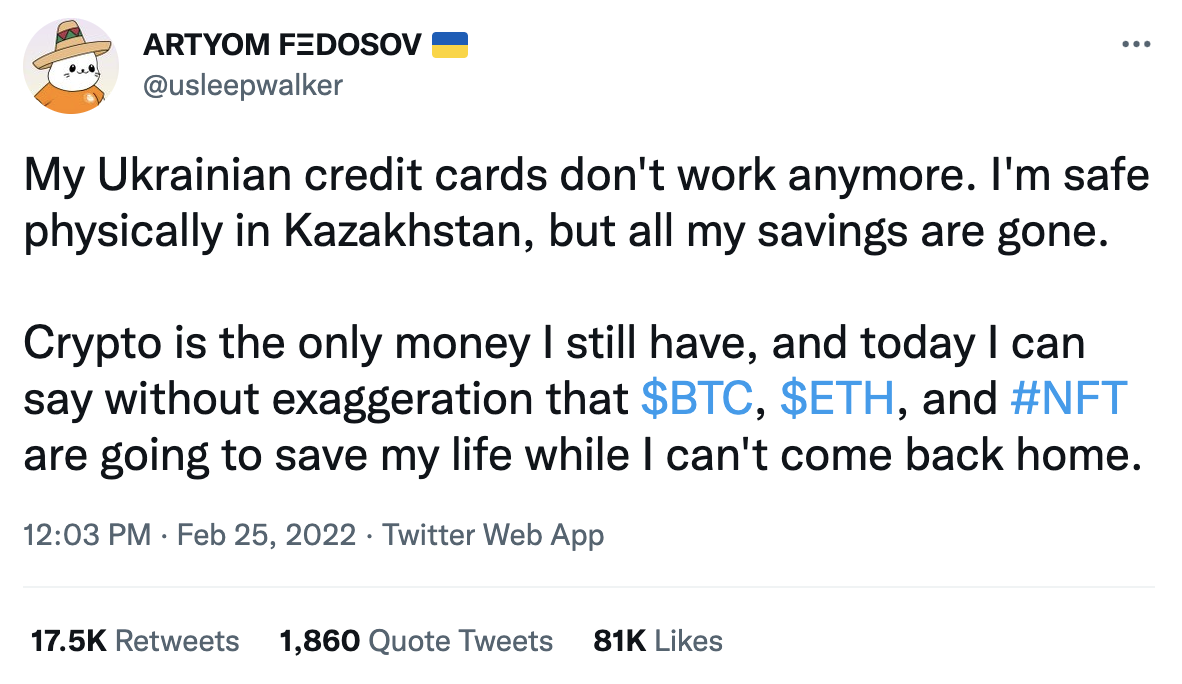 At their core, Bitcoin, Ethereum, and the like are neutral technologies that anyone with an internet connection can use. While we celebrate the use of these neutral technologies to help a nation defend itself against a foreign invader and as a lifeline for refugees, it also begs the question: what about their use by those on the other side of the conflict? Principally, the Russian government.

Western governments responded to Russian aggression with unprecedented sanctions against the Russian government. This coincided with widespread narratives surrounding the potential for cryptocurrencies to be used to circumvent those very sanctions. 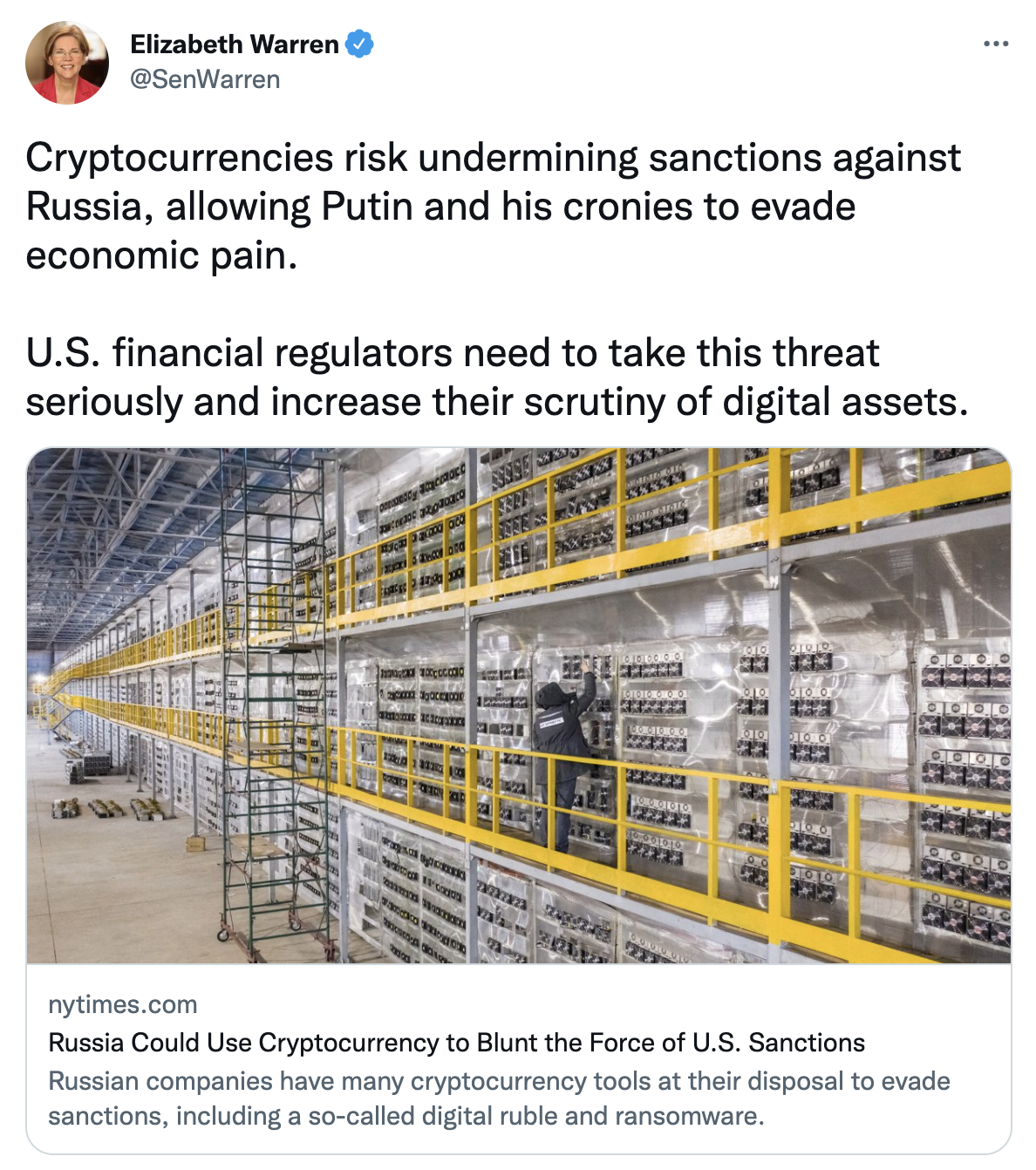 Before we examine the fact or fiction behind these claims, it helps to understand what these sanctions entail.

Since Russia invaded Ukraine, governments around the world, including the U.S., have imposed sanctions targeting the Central Bank of Russia, major Russian commercial banks and companies, Vladimir Putin, Russian elites, among others. In aggregate, these sanctions cut targeted individuals and entities off from international banking and in many instances, freezes their assets.

Among the most substantial sanctions imposed was kicking major Russian banks out of SWIFT, which is the financial network used by over 11,000 banks and institutions to move trillions of dollars across borders. This severely limits Russia’s ability to receive payments for oil and gas: their main export. For context, when Iranian banks were banned from SWIFT in 2012, and sanctions were imposed on Iranian oil purchasers, Iran lost nearly half of its oil export revenue and 30% of its foreign trade.

The most drastic sanction is from the US, UK, and EU banning transactions with the Russian Central Bank. The Russian Central Bank holds roughly $630B in the form of the world’s major reserve currencies — the dollar, euro, pound, yuan — as well as 2,300 tons of gold. With this sanction, Russia suddenly has no one to sell its reserves to, rendering its entire stockpile useless.

Is crypto their answer?

We’ve seen public speculation on how crypto could be used to evade those sanctions. However, that speculation has been unfounded as the crypto market is simply not large enough to help Russia meaningfully circumvent them.

Consider the Russian Central Bank’s $630B in immobilized assets. That’s 80% of Bitcoin’s market cap and larger than the rest of the crypto market put together. Converting that much fiat into crypto would take 5–10x the total daily traded volume of all digital assets, so the liquidity just isn’t there.

As crypto played a significant role in the defense of Ukraine, it was also cast into the fore of the American political system. Late last week, the Biden Administration published its long awaited Executive Order on digital asset regulation. 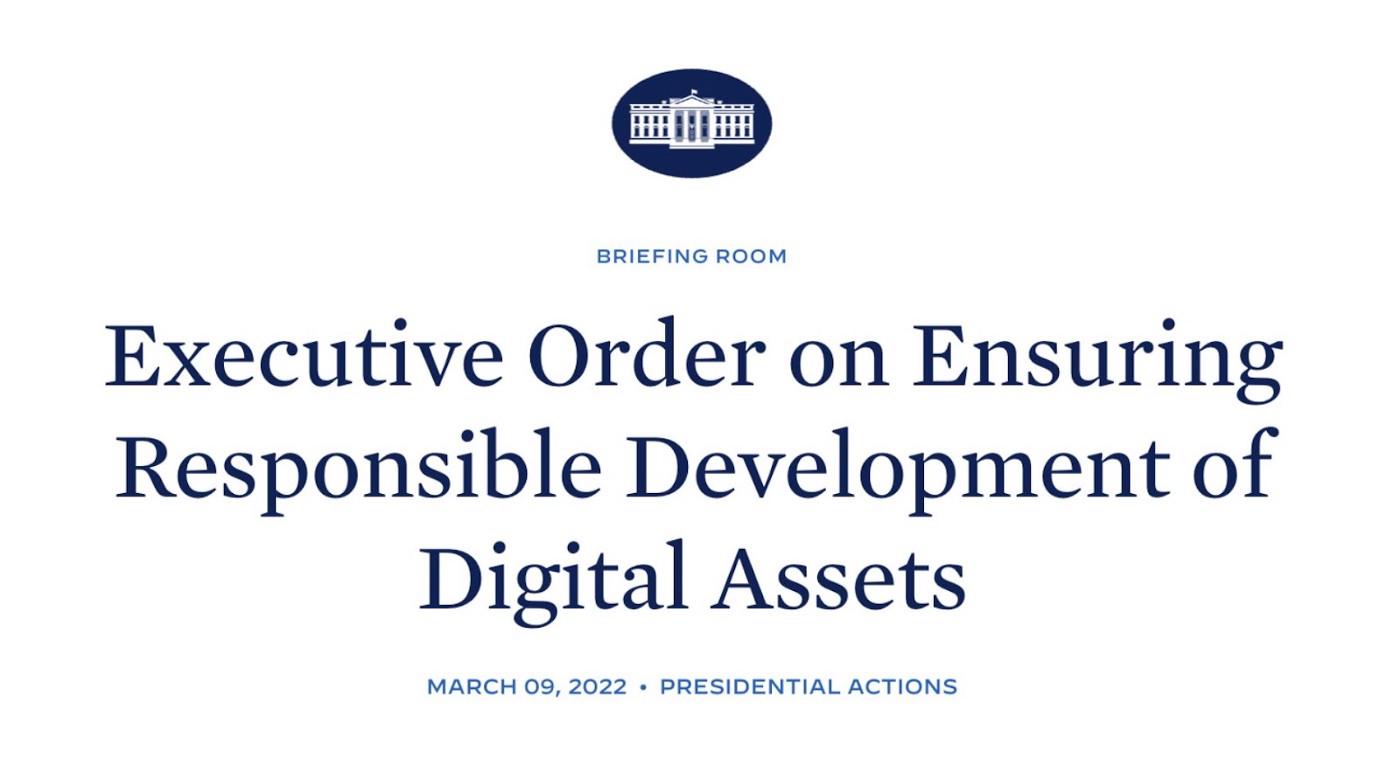 The Executive Order simply directed federal agencies to study the benefits and risks of digital assets, as opposed to putting any immediate legislation into action. On one hand, many were pleasantly surprised with the optimistic tone of the EO, as it acknowledged crypto and Web3 technologies as critical for the future of U.S. national economic competitiveness. On the other, the report focused more on the potential risks of crypto rather than its societal benefits.

The EO calls on a total of 23 federal government agencies, organizations, and White House Offices to assemble huge reports on the risks stemming from crypto. This outsized focus on risk, when compared to past EOs, has caused some people to worry that the Biden Administration doesn’t fully recognize the power and potential of digital assets, even as that power is being plainly demonstrated on the world stage.

While the EO may have felt like a milestone, it is ultimately the start of a long road ahead. One in which the whole of the US government will finally seek to fully understand the importance of this technology. It is critical that the government fully explores not only the risks, but also the benefits that digital assets bring, with enough transparency to allow the public to weigh-in on a federal approach to regulation.

Ultimately, this presents a tremendous opportunity for the industry to engage with regulators about how to best embrace the transformational nature of crypto and Web3 technologies.

To sum it all up, regardless of how you feel about crypto’s application in funding a war effort or the increased attention it’s receiving from the most powerful government in the world, it’s apparent that we’ve entered uncharted territory: this next phase of crypto adoption will look drastically different from the last. 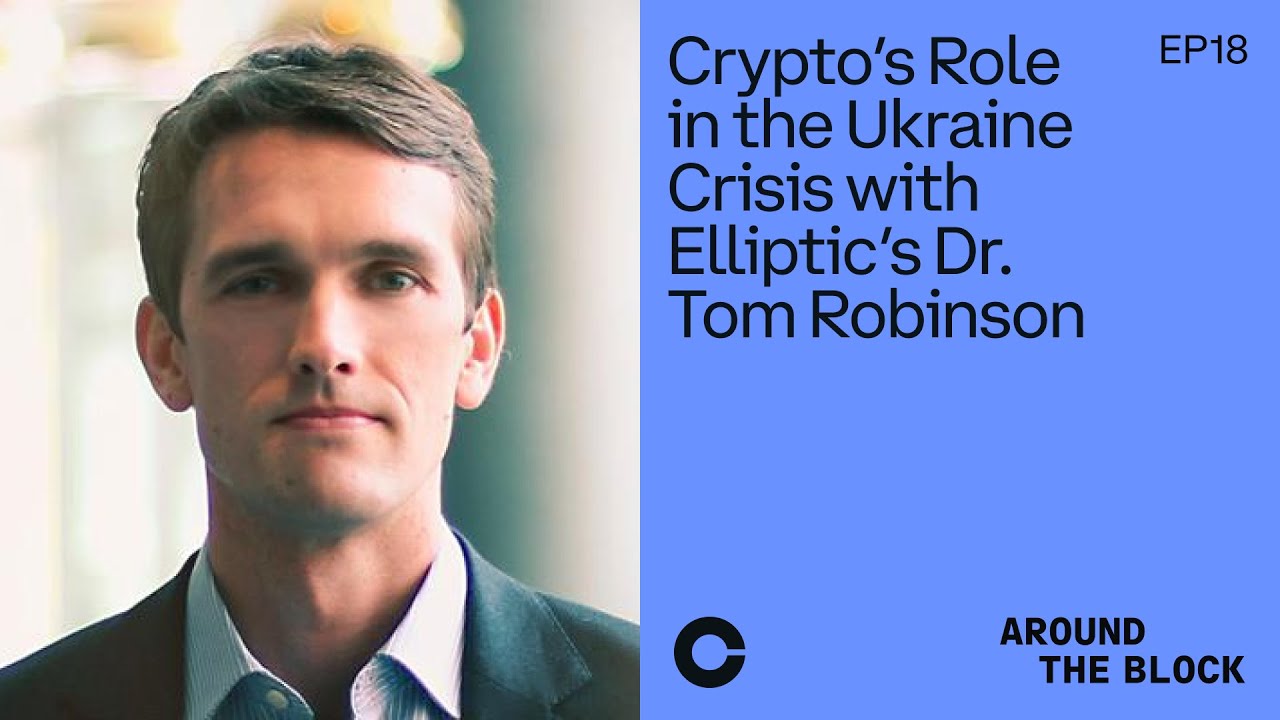 This website does not disclose material nonpublic information pertaining to Coinbase or Coinbase Venture’s portfolio companies.Disclaimer: The opinions expressed on this website are those of the authors who may be associated persons of Coinbase, Inc., or its affiliates (“Coinbase”) and who do not represent the views, opinions and positions of Coinbase. Information is provided for general educational purposes only and is not intended to constitute investment or other advice on financial products. Coinbase makes no representations as to the accuracy, completeness, timeliness, suitability, or validity of any information on this website and will not be liable for any errors, omissions, or delays in this information or any losses, injuries, or damages arising from its display or use. Unless otherwise noted, all images provided herein are the property of Coinbase. This website contains links to third-party websites or other content for information purposes only. Third-party websites are not under the control of Coinbase, and Coinbase is not responsible for their contents. The inclusion of any link does not imply endorsement, approval or recommendation by Coinbase of the site or any association with its operators.