Hedging risks in a time of uncertainty

In the Weekly Market Commentary, David Duong explains how geopolitical stress and the tightening of monetary policies has led to a convergence of risk assets. 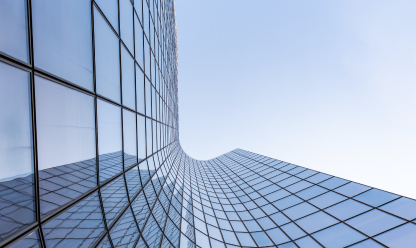 We look at how the ongoing conflict in Ukraine is impacting the global economy, including cryptocurrencies.

Over a longer time frame, we think the key themes of geopolitical tension and global monetary tightening have led to a convergence in risk asset performance in recent months. This has been visible in the rising correlation between crypto (bitcoin) and traditional assets like tech stocks (Nasdaq 100) with that figure now close to ~45% based on a rolling window of 90-day returns (though the average including 2H22 until now is actually lower at 25-30%.) While that 25-30% could be considered relatively small, compare that to an average correlation of 18% in 1H21 or closer to 10% from 2016-2020.

In part, this recent increase reflects the size and scale of the shock to the financial system caused by the invasion of Ukraine and the important unknowns to be worked out in the weeks ahead. Removing Russian banks from the SWIFT messaging and payment order system could create settlement issues for non-Russian (mainly European) banks. Multinational companies divesting themselves of Russian holdings could see their corporate earnings impacted negatively. The sanctions imposed by the US, Europe, UK and Canada on Russian central bank reserves have impacted the ruble (RUB), but at a cost – this also drains the global system of roughly US$300B in reserve liquidity, which has the potential to hurt risk assets in the weeks ahead.

All of these things represent potential externalities for the global economy, from which crypto is not necessarily immune. That is, investors who own crypto assets and ascribe value to say the scarcity of bitcoin may also be invested in other assets like stocks, and when there is newsflow that challenges the price action in a significant way, behavioral bias may lead to broad based selling.

But the value of crypto as a possible hedge for other assets (stocks, bonds etc) in a portfolio stems from the factors that drive its performance on a secular basis such as disruptive technology, security considerations, reduction in transactional frictions, supply factors, liquidity, market adoption (Metcalfe’s Law) or even regulatory developments. These are very different from the factors that impact bond performance (inflation and interest rates) or stock performance (corporate earnings, growth, risk free rates.)

Moreover, the digital assets that make up this asset class are not uniform and in many cases serve as both productive as well as financial capital for a particular protocol. As a result, they don’t carry the same properties as equities or bonds or commodities, which at times can make these assets easier to price than value.

Over time, we would expect to see the correlation to traditional markets rise as blockchain technology becomes more mature and less of a high-growth investment opportunity. Regardless, we think crypto could present a suitable hedge for traditional assets in a portfolio. 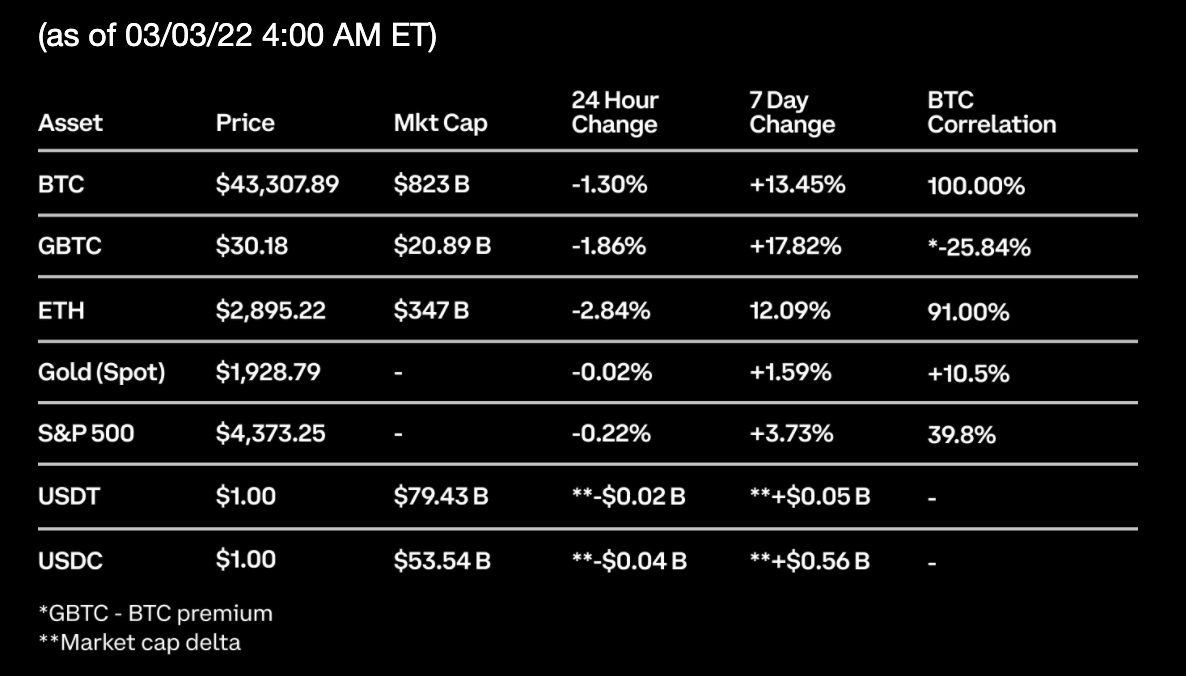 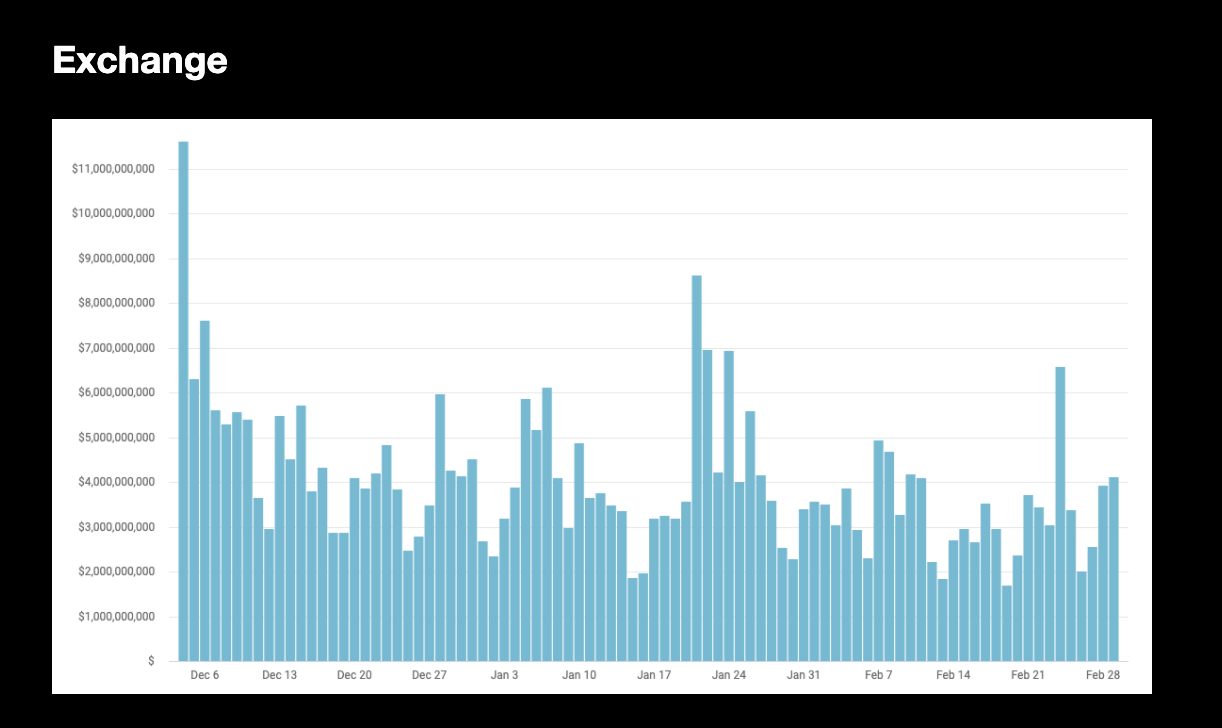 Exchange volumes are up this week, starting from Feb 24’s spike in trading volumes triggered by Russia’s invasion of Ukraine. The headlines caused an initial selloff in the market which saw BTC dipping below $35k on the day. Prices have since recovered though, with BTC trading firmly above $40k this week.

The crypto rally this time was BTC-led, as there is still a lot of uncertainty in the market while investors digest the sanctions laid out by the international community. BTC’s dominance rose to 28.7%, compared to 27.7% the week before. On the other hand, ETH’s share remained largely constant at 23.5%. SOL and AVAX have also dethroned ADA this week, coming in 3rd and 4th place respectively.

While BTC and ETH’s combined % of volumes does look high at 52%, once prices stabilize around these levels, we might start to see more rotation out of the majors from investors into the higher-beta top altcoins. 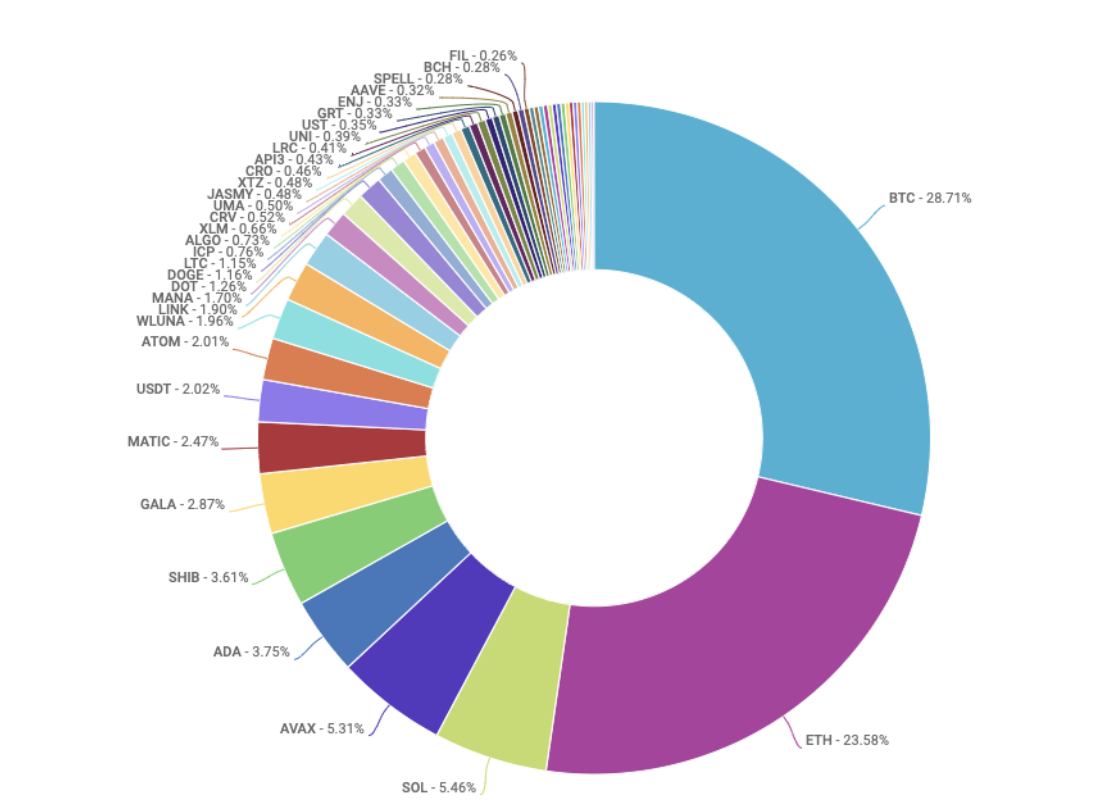 On the desk, macro accounts and high net worth individuals were initially derisking in the majors and some of the top alt coins in response to the invasion. As prices pushed lower, we started seeing more orders accumulating below market levels.

Once things turned around and prices held firmly above $40k on Monday, we finally got more opportunistic buying from crypto funds. Large macro names which have been inactive for quite a while are returning to add positions in good sizes, which could be a positive sign that prices are bottoming out.

Cryptocurrency fundraising is considered a criminal offence in China, according to the interpretation by the Supreme People’s Court. The law targets illegal fundraising aimed at highly speculative investments which Chinese regulators are trying to eliminate. Penalties will depend in part on the value of the amount raised, with a threshold of 100,000 yuan ($15,800) deemed to be a “large amount”, and with “extremely huge” amounts resulting in up to 10 years in prison. (SCMP)

The EU is considering new measures to ensure digital assets are not used to dodge sanctions against Russia as the bloc toughens its enforcement of the financial penalties imposed on Moscow in the past week. (Financial Times) 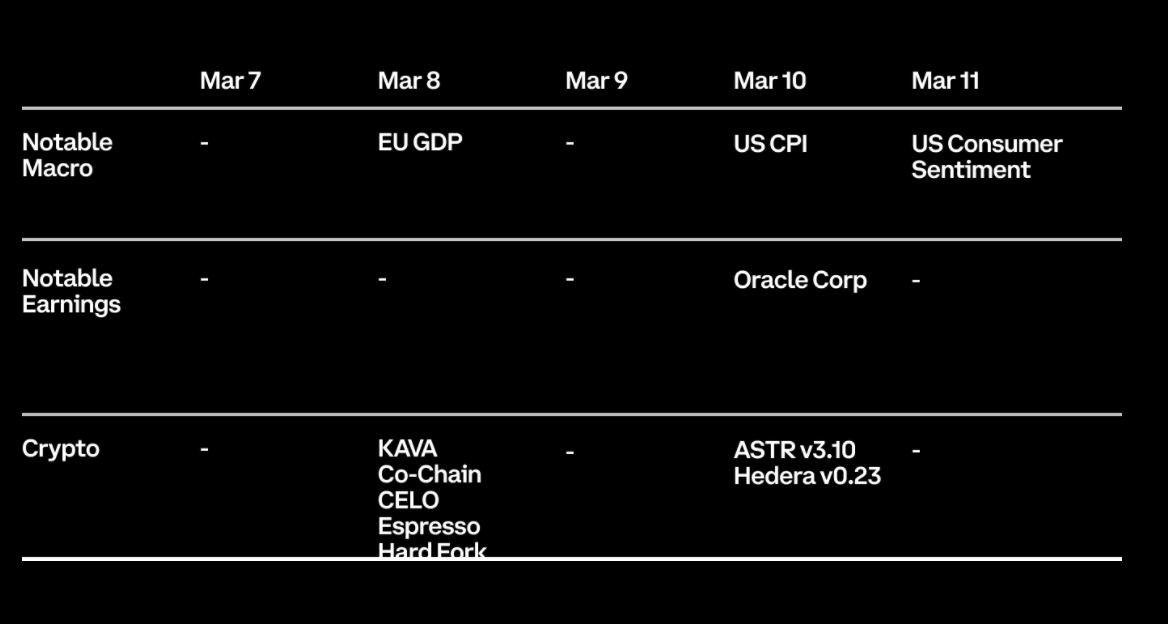 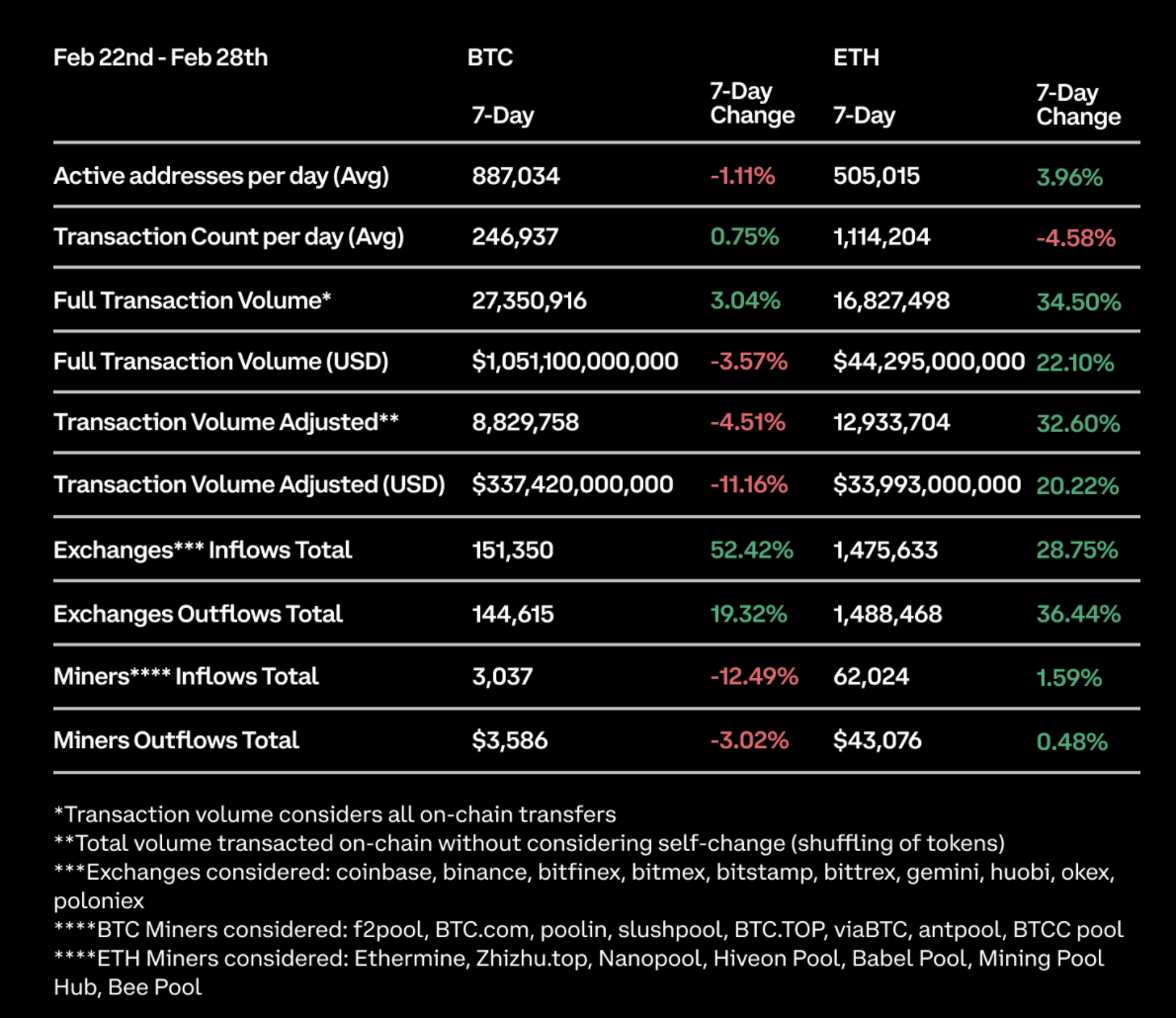