What crypto vs stock price correlation doesn't tell you 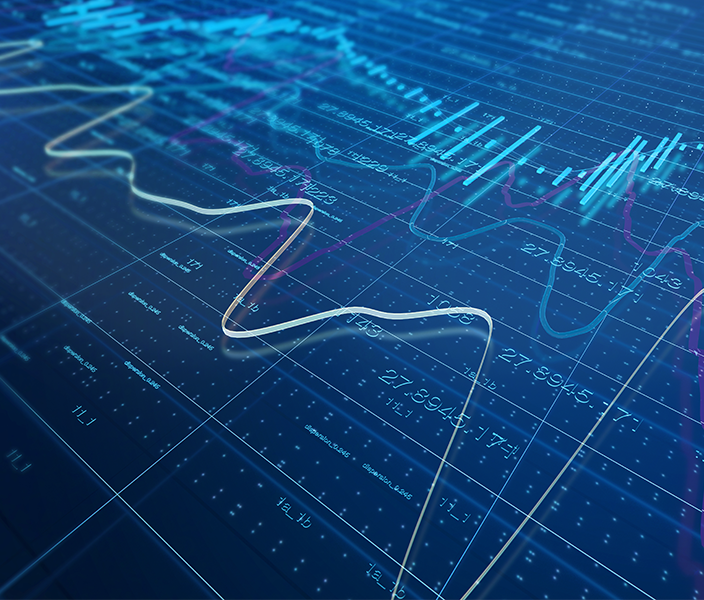 In early March, a 1 standard deviation down move in bitcoin represented average depreciation of 8.6% compared to only a 2.1% decline in stocks with respect to the preceding 40-day average of returns.

While many people pay attention to the correlation between crypto versus stock returns, we think this fails to capture the nuances of what is actually happening. The wide spread in spot volatility between these asset classes can be distortive, which is why we think it’s more meaningful to look at standard deviation moves rather than absolute returns. More recently, drawdowns in crypto have been much more shallow than the drawdowns in U.S. stocks, moving only around ~1 standard deviation lower in the former compared to ~2 standard deviations in the latter amid risk off sessions. We discuss this below.

We also want to highlight the recent launch of Coinbase Institutional’s Research & Insights website, which is the home to all content and thought leadership for institutions. We’re giving everyone access to leading crypto research from our experts — direct from the source, all in one place. You can find more information here: https://coinbase.com/institutional/research-insights

Finally, next week is a recharge week for us here at Coinbase, so we will not publish a weekly market commentary newsletter on April 1. The next newsletter will be published on April 8.

Over the last 6 to 8 weeks, we’ve seen much shallower drawdowns in crypto compared to U.S. stocks on a volatility adjusted basis. With few exceptions, crypto sell offs in the past have tended to keep pace or even outpace the move in U.S. equities, measured in standard deviation terms. The last time that this didn’t happen was in 1Q21 when both (a) the upside moves in crypto outpaced the rally in equities and (b) the downside moves were less aggressive than the stock sell offs. Part of that 1Q21 dislocation may have reflected fiscal and monetary liquidity injections at the time, leading investors further out the risk curve, whereas the magnitude of the current dislocations in both directions appear to be much higher now.

See the chart below:

Comparing absolute returns between crypto and stocks isn’t particularly meaningful when we have such a wide disparity in their average volatility levels. For example, bitcoin’s spot volatility is 60% compared to the S&P 500’s 34%, based on the annualized 40-day standard deviation of one-day returns. Instead, we think the z-score (defined as the standard deviation in performance between these asset classes relative to a rolling average) is a better measure of equivalency during risk-on versus risk-off periods.

In early March for example, a 1 standard deviation down move in bitcoin represented average depreciation of 8.6% compared to only a 2.1% decline in stocks with respect to the preceding 40-day average of returns. In other words, an 8.6% decline sounds much more alarming than a 2.1% decline, but adjusted for volatility, both returns represented only a 1 standard deviation move for their respective asset classes.

Why is this relevant? During particularly volatile periods over the last several weeks, U.S. stocks saw ~2 standard deviation drops on three separate occasions compared to only ~1 standard deviation drops for bitcoin. Periods of bitcoin strength in standard deviation terms have also been comparatively higher than for stocks until very recently. This gives us much more information about relative performance outside of simply looking at metrics like correlation, which fails to capture such nuances in the data.

This decoupling is important in our view, because it suggests that crypto returns can exhibit less relative volatility compared to other risk assets amid some of the most challenging market conditions we have faced in recent history. This could potentially support an argument for greater (relative) crypto stability in the short term. We suspect that current global inflationary pressures fueling a persistent negative real rate environment reinforces the case for crypto both as a risk asset and as an inflation hedge. 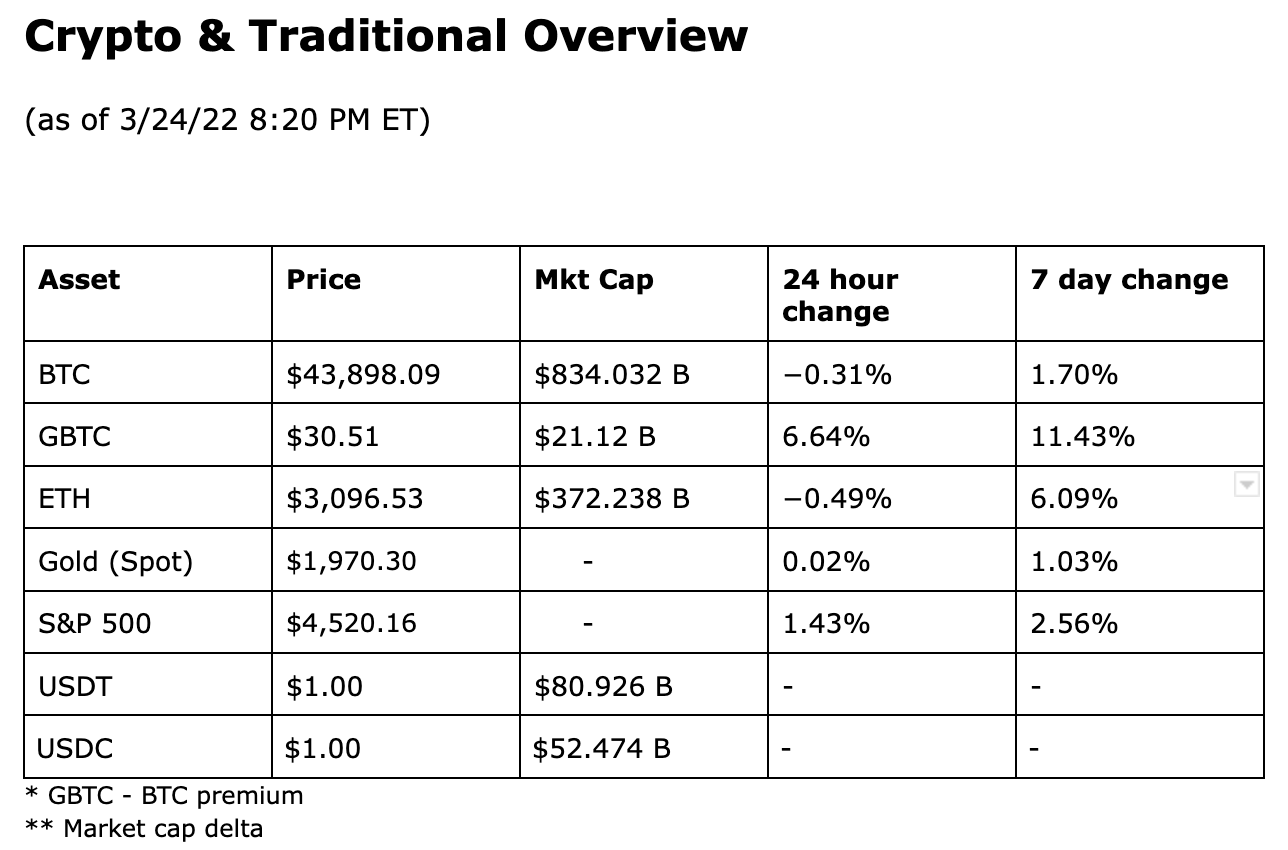 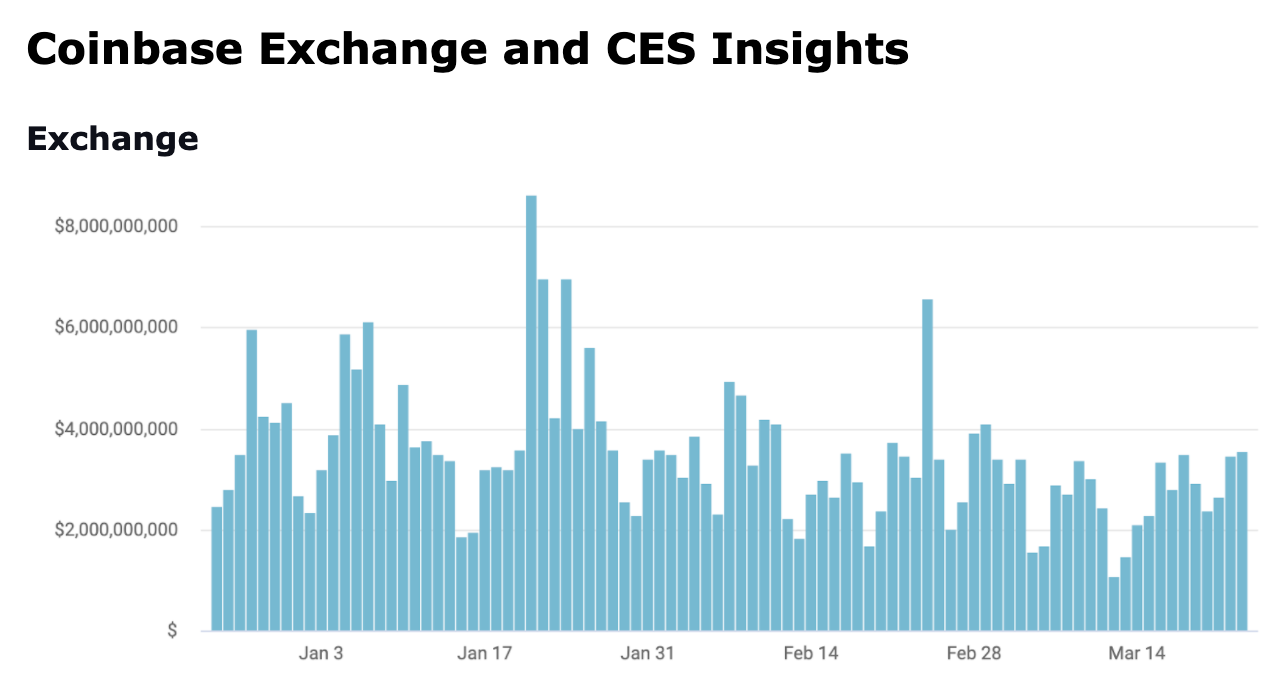 Volumes on the exchange have been fairly lackluster over the course of the last few weeks with occasional spikes despite the strong bounce across the board as BTC is testing US$43,000 again.

Looking at the volume breakdown in further detail below, it's noticeable that the relative BTC and ETH volumes have decreased which has gone hand in hand with an increase in risk appetite in the broader market as altcoins have outperformed with spikes in volumes traded.

Despite this volume spike, buy ratios for most coins have moderated and were mostly in the 50-60% range as can be seen on the chart below. Trading volumes of APE and the low cap JASMY outpaced the most oft-traded coins such as ADA, SOL and AVAX.

APE is a new listing on Coinbase Exchange connected to the Bored Ape Yacht Club, which is a collection of 10,000 NFTs that has received a lot of attention on social media over the last two weeks. Each Bored Ape owner was airdropped 10,094 APE coins which was worth more than $130,000 on Thursday. 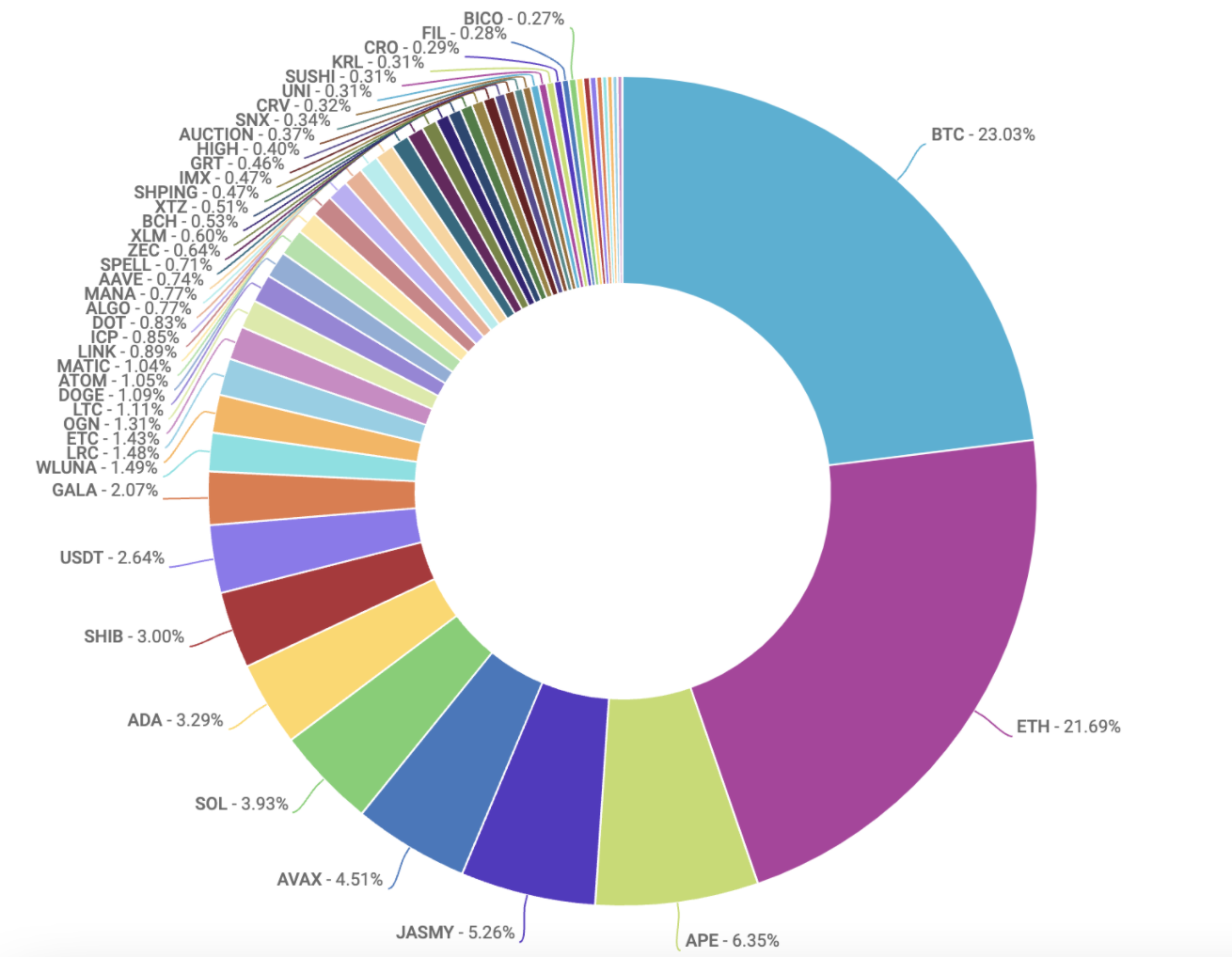 On the desk we have continued to see macro funds and high net worth individuals (HNWI) deploying new capital into crypto with a particular focus on BTC and ETH over the last week and it is certainly noticeable that the typical pattern of close to no bidding interest is seen at the trough which then proceeds to increase over-proportionally the stronger the bounce or rally.

In altcoins the picture was slightly more mixed as we saw selling across ICP and SOL which was absorbed with ease by the market. On the other hand there were inflows into major L1s such as DOT, AVAX or ATOM while we also saw buying interest in coins further out on the risk curve such as CRO.

The technical picture in BTC has improved significantly over the course of the last week as BTC has formed a higher low consolidating significantly and now retesting the important $44,000 resistance region. Another positive is the 50DMA starting to move upwards with the 100DMA around $42,200 getting broken in the upside move.

If BTC manages to break through the resistance region between $44,000-$45,000 we could see a short squeeze and an accelerated move towards the $50,000 area as there still is significant capital on the sidelines which could rush back in to increase allocations.

Looking at downside scenarios if BTC fails to establish itself above this area at first attempt it’s possible to envisage a retest of the 100DMA although the picture of higher lows since January looks very constructive as we go into H2.

The Malaysian Ministry of Communications and Multimedia is calling for the state to legalize crypto and NFTs, as well as to back the adoption of cryptocurrencies. This is as the cryptocurrency industry grows in popularity among the younger generation. This is a change in tone from the previous government, where Malaysia’s finance minister warned that crypto payments were illegal, as they did not meet the universal characteristics of money (Coin Telegraph).

The upcoming EU crypto regulation is very welcome as it brings much-needed clarification of responsibilities. Yet as the crypto-universe develops very fast, a number of questions remain unanswered. (ING) 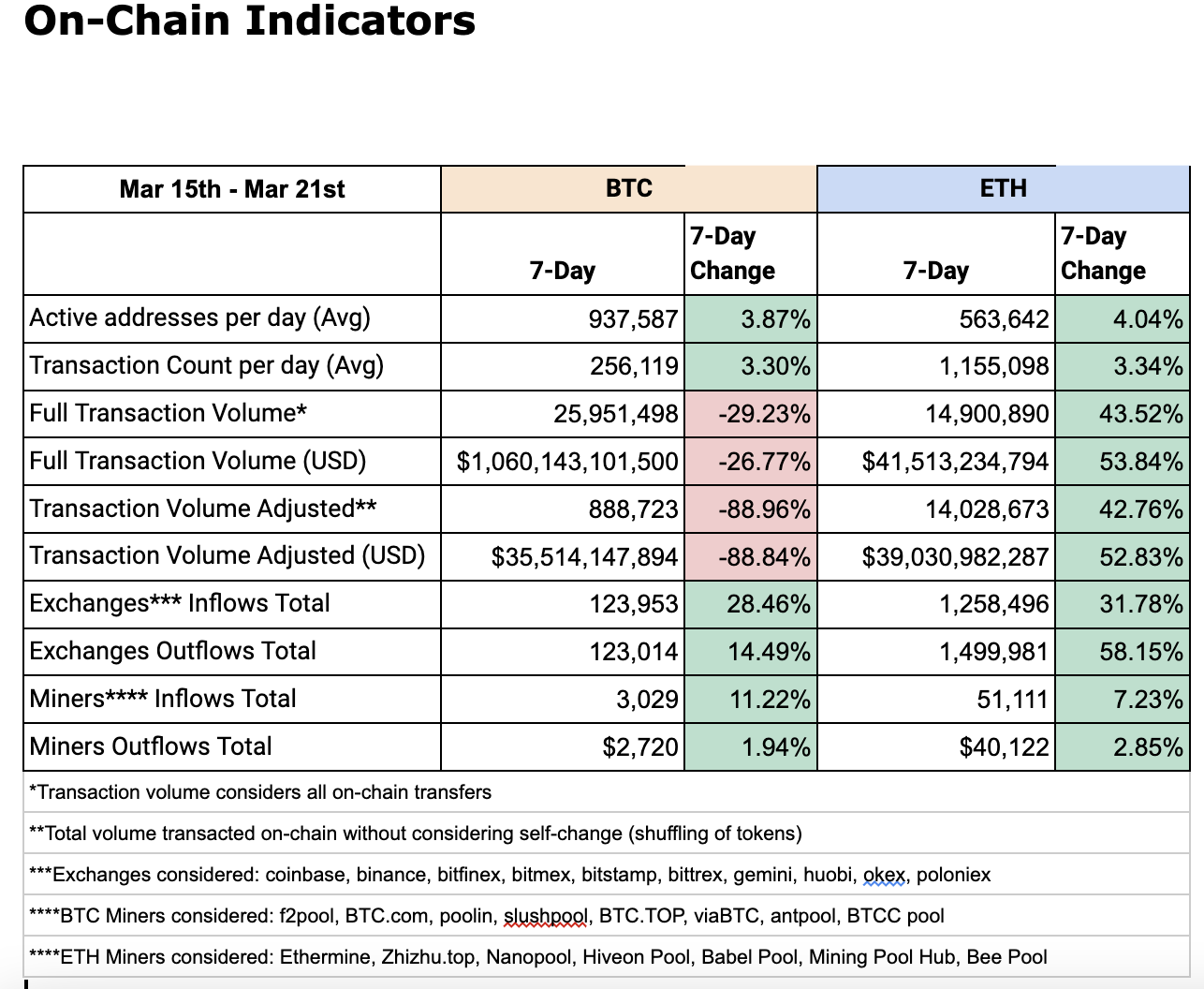 All on-chain data and metrics are powered by Coinbase Analytics. Email daniel.johnson@coinbase.com for more details.