The ETH/BTC cross found a bottom around the 0.064 level and has since bounced back sharply, which augurs well as a sign of crypto investor sentiment. 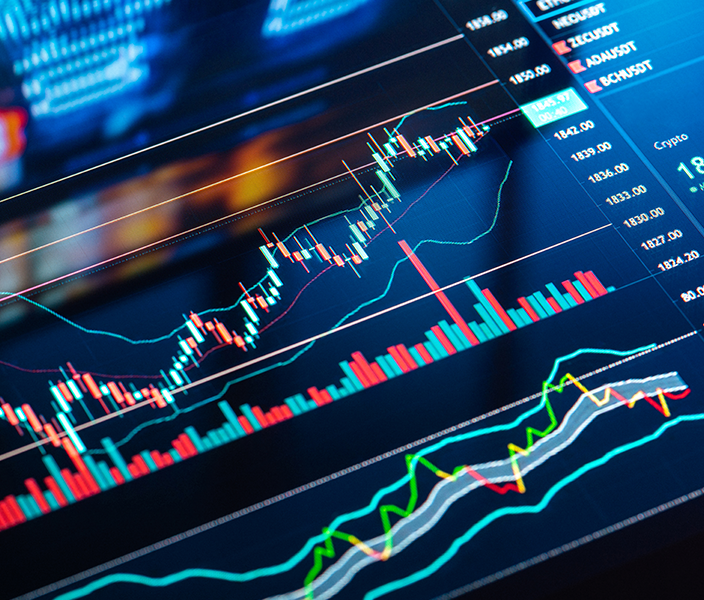 The ETH/BTC cross has bounced back sharply after a dip, showing that crypto investor sentiment is being bolstered by the progress of the merge.

Macro: along for the ride

This week’s Fed meeting represented a major event risk for crypto in our view, but despite the board’s hawkish tone on March 16, markets seemed to respond favorably to the removal of some latent policy tail risks. That said, the Fed’s dot plot shows six more hikes this year (seven total and up from three previously) which wasn’t necessarily a major surprise, but there's also a pretty wide dispersion for next year and the year after, suggesting that there’s still a lot of uncertainty over the future economic scenario.

That’s not necessarily confidence inducing in our view, particularly when the spread in 2y10y U.S. rates is still signaling the risk of a policy error. Indeed, the Fed’s ability to engineer a soft landing remains fairly narrow in our view. But we think the move in markets after the FOMC could reflect the size of the capital sitting on the sidelines as well as a technical relationship associated with today’s (March 18) options expiry for equity markets. The latter may be affecting spot prices due to the related delta hedging exposure. (Note that BTC and ETH have major upcoming option expiries next week –March 25 – with open interest of BTC78.8k and ETH754.9k respectively. According to Deribit, the max pain levels for these contracts are US$42,000 and $3,000 which are both above current spot levels.)

But the Fed wasn’t the only major macro development for markets this week, as encouraging comments from China’s Vice-Premier Lui He (on proactive policy measures) helped stabilize markets. It’s important to monitor what specific actions the Chinese government and the central bank could take here, but already the Ministry of Finance shelved plans to expand its property tax pilot program on March 16. Potentially this could act as a counterbalance to global economic contractionary forces. Overall however, we maintain a relatively cautious view that crypto markets will need to see a period of stabilization in 2Q22 before a more sustainable recovery can get under way.

Progress on “the merge”

The ETH/BTC cross found a bottom around the 0.064 level and has since bounced back sharply, which augurs well as a sign of crypto investor sentiment. Part of the price action has to do with progress on the merge (of Ethereum’s mainnet with the Beacon Chain, representing the blockchain’s shift to a proof-of-stake consensus mechanism) after the Ethereum Foundation announced the Kiln Merge Testnet on March 14. This is the final scheduled testnet on the readiness checklist for the merge mainnet and follows the Kintsugi Merge Testnet that was launched in December 2021. Ethereum.org says the merge upgrade is on track for sometime in 2Q22.

We have seen a corresponding increase in the number of active validators on the Beacon Chain from 300,702 at the end of February to 315,576 as of March 17. That’s a 4.9% increase in just 17 days compared to 3.9% during the full month of February or 4.8% during the full month of January. The amount of staked ETH has risen from 8.8M at the start of January to 10.0M at the moment. This brings our topside estimate of post-merge staking yields (that we mentioned in our Market Intelligence report “ETH Staking Post Merge: Yield Estimates and Risk” published February 23) down from 12.2% to 11.6% as that scenario was using an effective ETH balance of 9.5M.

Validators on the Beacon Chain by deposit address 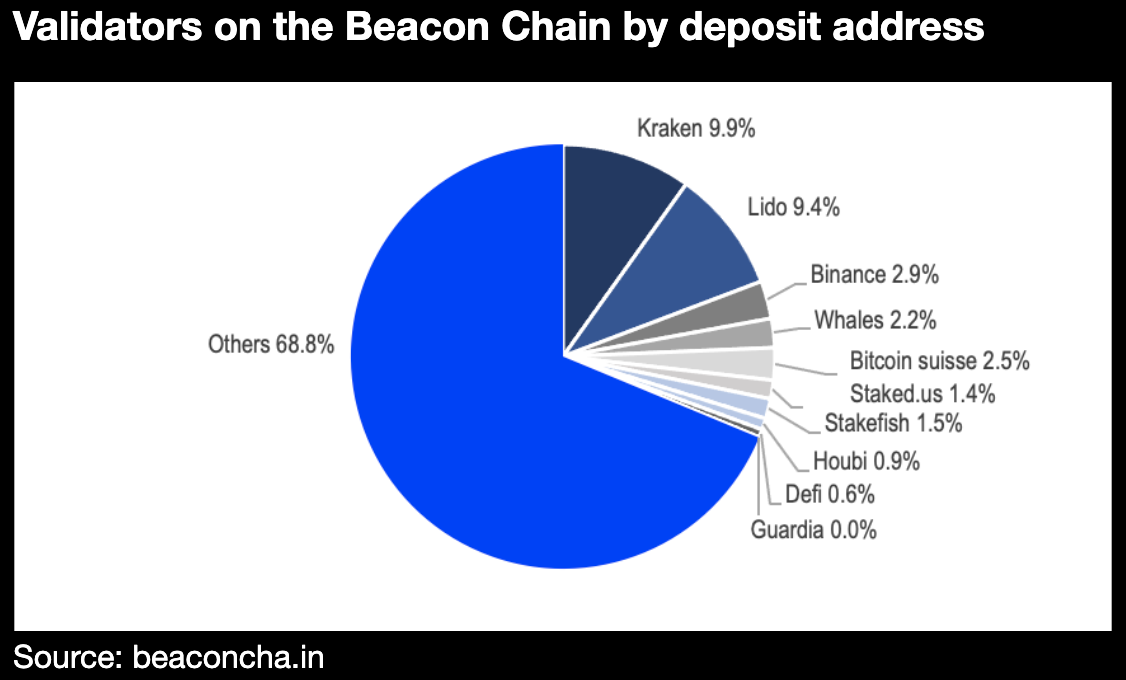 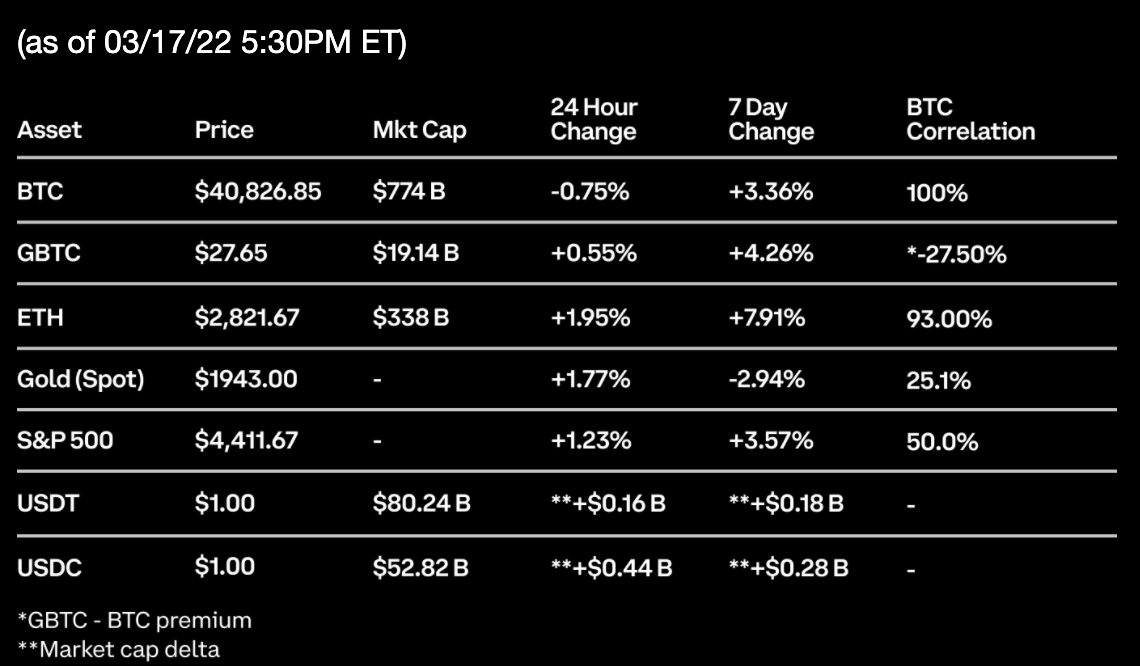 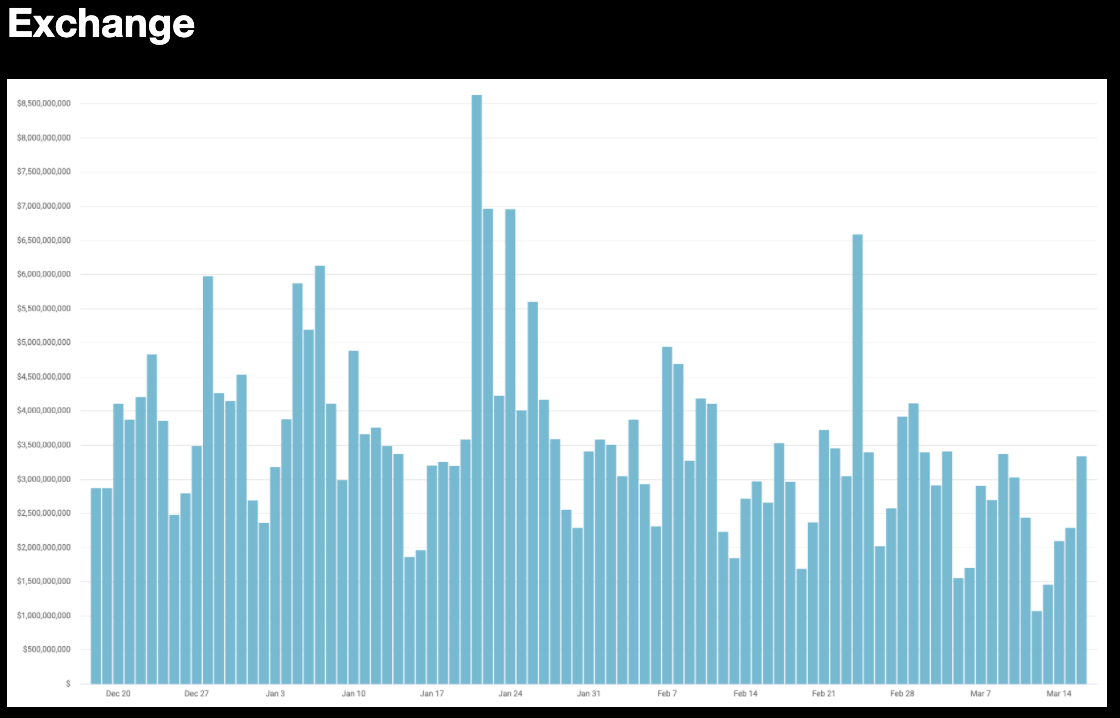 On the exchange, volumes have been trending lower - both peak and average volumes have been on the decline from early February till now, with a few exceptions. We do tend to see reduced interest in the middle to end of bear phases, and recent price action is reminiscent of that in June 2021 where we traded large, choppy and compressing ranges that took a toll on investor conviction. Prices do look like they are holding up this time around; however, it is important that we stay above the $34,000-$36,000 region, otherwise risk could be for further downside. 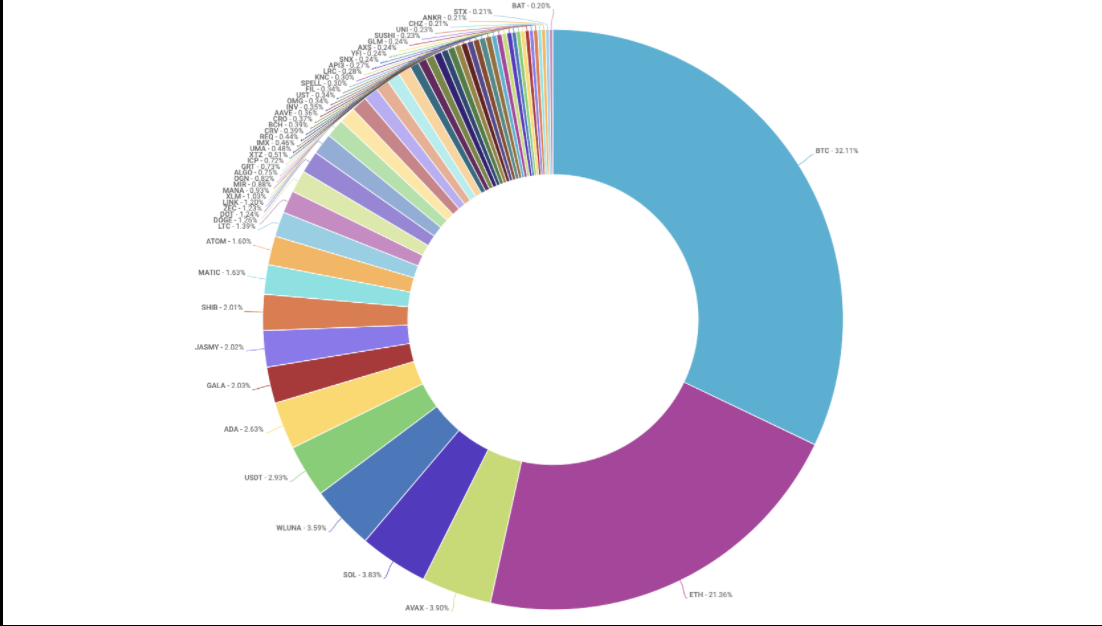 BTC continues to be the dominant asset traded by our consumer client base. While this has been true over the past few weeks, BTC volumes now represent an overwhelming 32.1% of volumes traded, possibly the highest volume-share we have seen in a while. This is in line with Bitcoin dominance pushing back above 43%.

Apart from BTC and ETH, the next most popular assets are large-cap L1s (AVAX, SOL, WLUNA, ADA). This pattern is also consistent with what we have seen over the last few weeks, though WLUNA is a fresh one in the mix as we continued to see outperformance last week, with LUNA reaching fresh all-time-highs above $105.

On the desk, February flows were quite lackluster, but activity has picked up in March as hedge funds are once again taking risk. We are seeing conflicting views here, where we saw some names buying into the bounce back above 40,000, while others chose to use those higher levels to reduce risk. We saw similar trades in ETH from hedge funds, as well as smaller buying interest in DOT and SOL from venture funds. 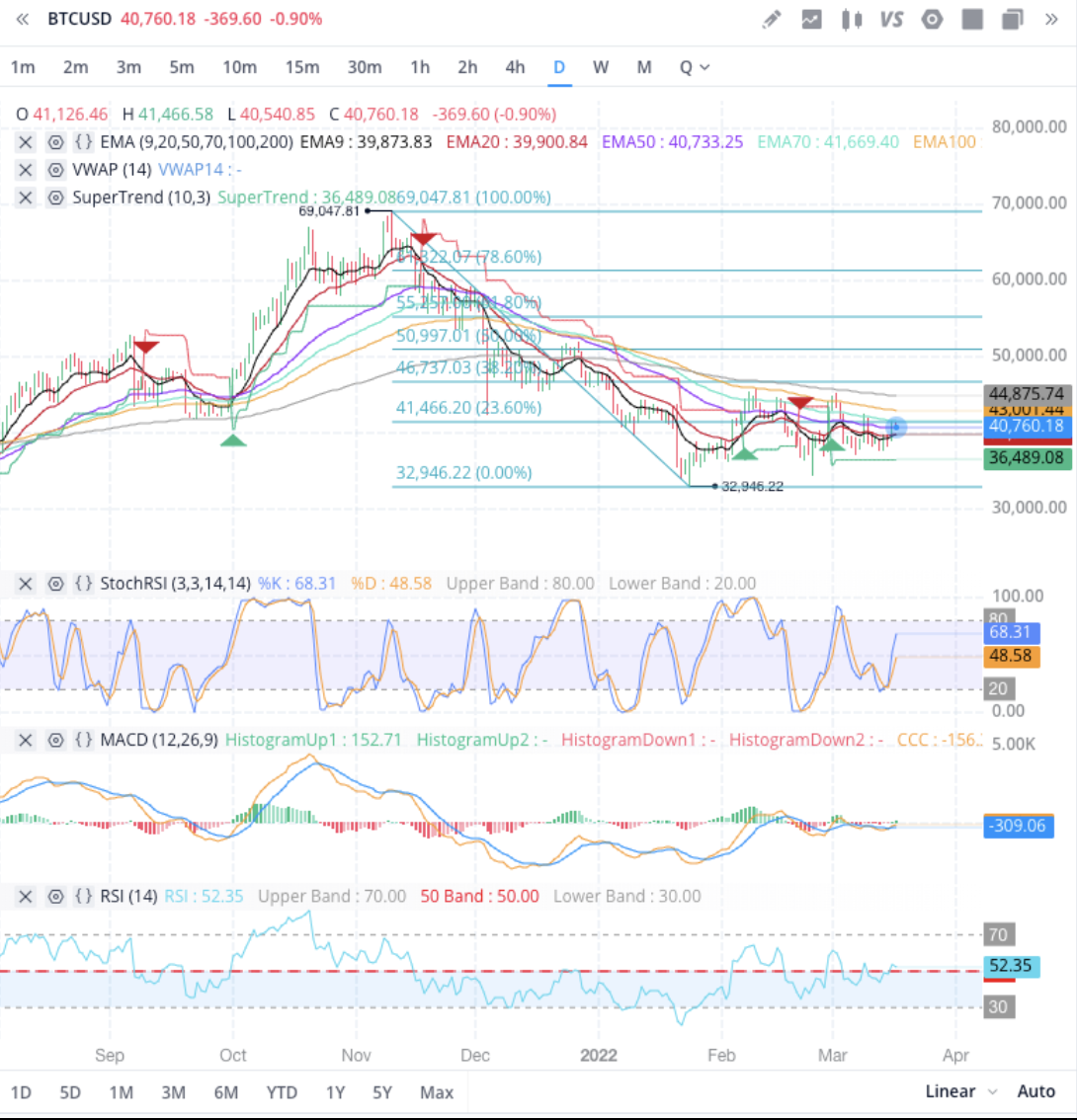 After rejecting the EMA70 ($42,161) using the 1 Day timeframe (March 10th), Bitcoin has stayed in a relatively tight range this week. As of March 17, BTC is testing its 23.60% FIB level for the second consecutive daily candle and all signs point to a short term bullish setup. If BTC can have a daily close above its EMA70 ($41,670), this would signal a potential push and face resistance at the EMA 100 ($43,600). We are also seeing a bullish MACD cross and an EMA9 / EMA20 cross on the 1 DAY chart. Short term chart - bullish.

South Korea’s incoming President Yoon Suk Yeol makes broad cryptocurrency pledges for when he takes office in May. These include promises to allow initial coin offerings and not to impose taxes on cryptocurrency trading gains of up to 50 million won ($40,000), giving them the same treatment as capital gains for equities. Yoon’s proposals were welcomed by cryptocurrency advocates who believe he will open the door to increased opportunities in blockchain technology-based assets. (Nikkei) 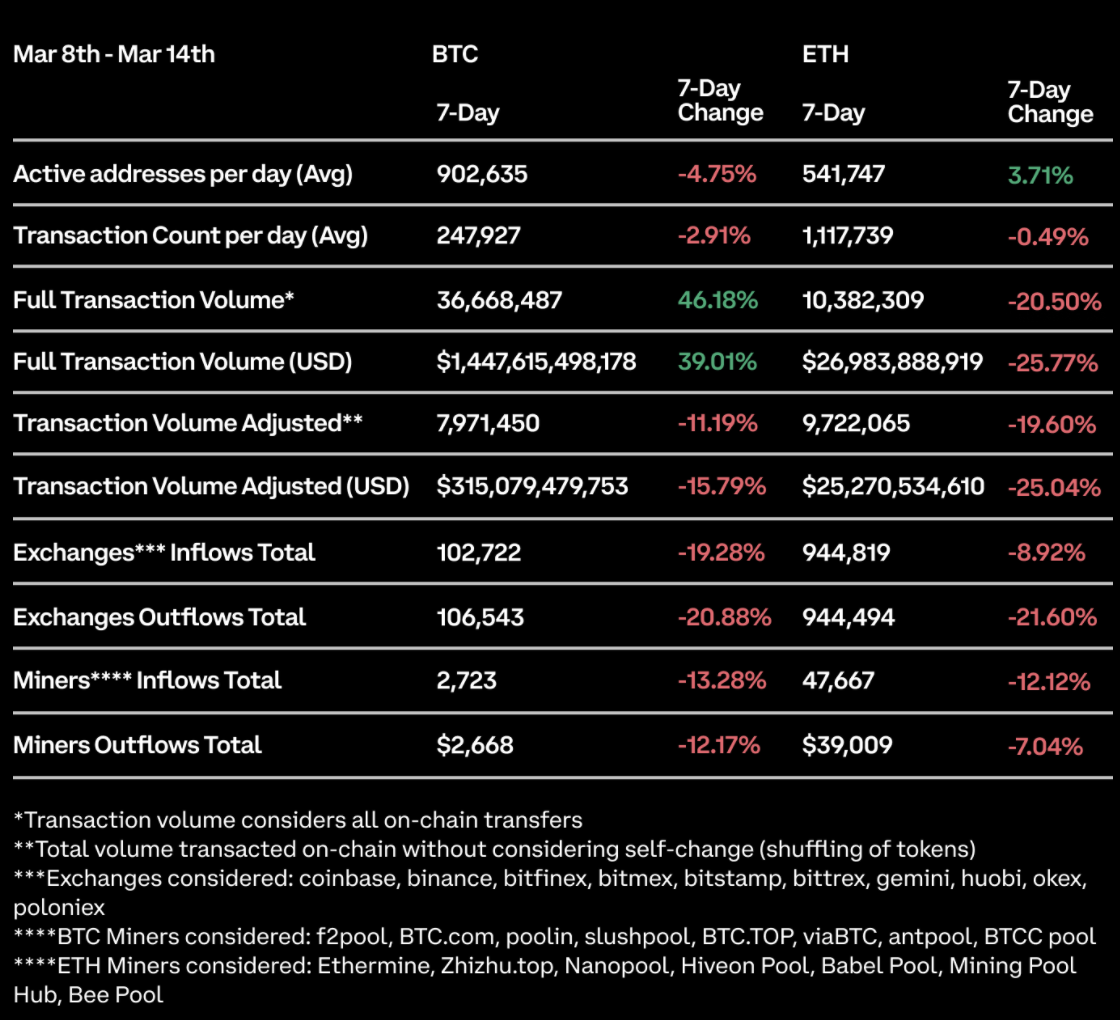 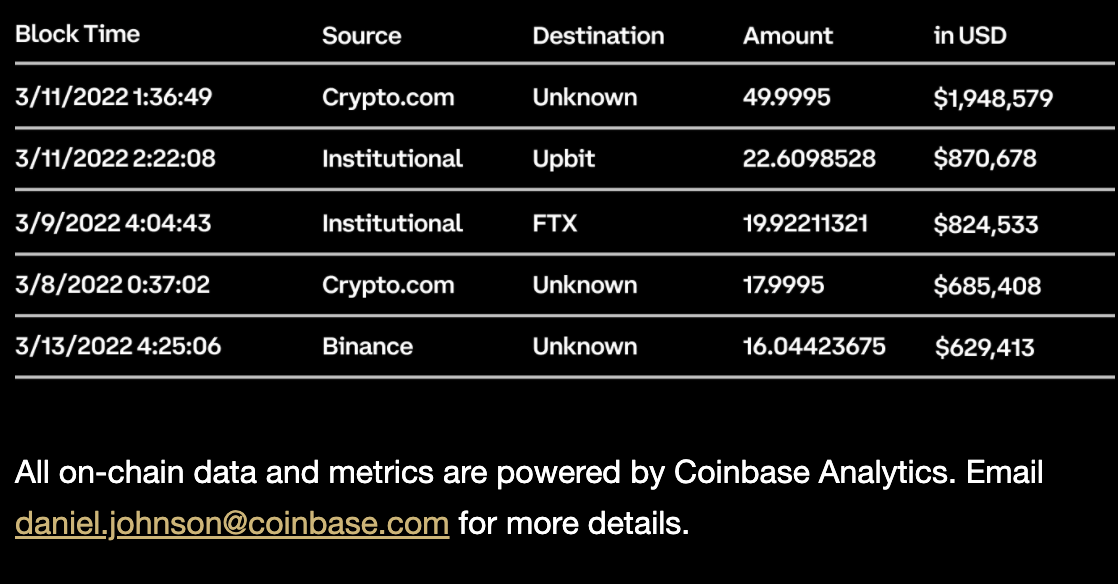