We look at the liquidations that have impacted firms like Celsius and Three Arrows Capital as well as assess the U.S. Federal Reserve’s decision to hike rates by 75bps. 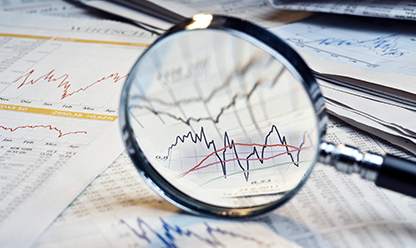 Market recoveries on the day of the FOMC meeting are misleading because while the catalyst is often benign signaling from the Fed, we think the move itself tends to be driven by positioning and technicals.

This week we look at the liquidations that have impacted firms like Celsius and Three Arrows Capital and evaluate some of the economic risks involved here. We also assess the general risk environment following the U.S. Federal Reserve’s decision to hike rates by 75bps on June 15 in light of the concerns surrounding sticky inflation.

Lately, there seems to be a pattern of risk assets selling off ahead of the U.S. Fed’s FOMC meeting, rallying in relief on the day of the meeting, and subsequently giving up some or all of those gains the next day. In our view, those market recoveries on the day of the FOMC meeting are misleading because while the catalyst is often benign signaling from the Fed, we think the move itself tends to be driven by positioning and technicals.

On June 15, the Fed accompanied a 75bp hike with comments that suggest they can still deliver a soft landing and lower expectations of recession with an unemployment rate of ~4% by 2024. Fed Chair Jerome Powell indicated that they expect to contain inflation without making 75bps hikes commonplace and hinting that 100bps hikes are unlikely (i.e. a 50bps or 75bps hike on July 27 is the more likely outcome.)

On the other hand, we had similar “dovish” forward guidance from the Fed at the May 4 meeting when they said were not “actively considering” a 75bps hike for the June meeting. Then they delivered 75bps at the June meeting. A lot can happen between meetings, like intransigent inflation crushing optimists' expectations of a market rebound on the back of a strong job market. Thus, despite their best laid plans, if Fed decisions remain data dependent then we expect the guidance itself will be questioned.

In the crypto space, the issues with crypto lender Celsius have been made apparent and the losses stemming from the BadgerDAO hack ($120M in December 2021), the Stakehound private key incident ($71M in February 2022), and the Terra ecosystem collapse are all being tallied. Indeed, Nansen had previously identified Celsius as one of the seven wallets associated with the UST peg destabilization in early May, confirming that DeFi lending protocol Anchor had been an important source of yield for Celsius. In our view, this likely begged the question of how Celsius could fulfill its obligations without that 19.5% yield.

After denying multiple times that the redemptions from their platform were piling up, Celsius finally suspended withdrawals on the evening of June 12 citing market conditions. However, the catalyst was the widening price discrepancy between Lido’s liquid staked derivative stETH and ETH which started growing on June 8. We previously discussed why a discount between stETH and ETH has existed since at least early May, which you can read in our monthly outlook report. Celsius had accumulated a sizable stETH position that was used as collateral to recursively borrow from AAVE, where 1.46M stETH (or around a third of all stETH supply) had been parked. The mechanics of the trade make it difficult to unwind.

In the aftermath, we have also seen crypto hedge fund Three Arrows Capital (with NAV of $18B) offload its stETH position amid broader liquidations amounting to ~$400M according to CoinDesk. Reports suggest that 3AC borrowed from major lending entities including BlockFi, Genesis and Nexo, in some cases uncollateralized, which makes the full outcome of contagion unclear.

On the other hand, stETH has been trading at only a 5-6% discount to ETH on decentralized exchange Curve, which is the largest source of liquidity for stETH. This gap has been contained despite having a heavily imbalanced ratio of 19.5% ETH to 80.5% stETH in the pool. Note that stETH can theoretically be redeemed for parity at some point after the Beacon Chain merges with the Ethereum mainnet (i.e. the Shanghai Fork), which could make purchasing appropriately discounted stETH attractive for potential buyers looking for arbitrage opportunities.

A big part of these forced leveraged liquidations appear to be over at least for now, and as the economic risks of these structures are clarified, we expect there will be more thoughtful approaches to how leverage is administered in the crypto space going forward.

Volumes on the exchange have been slightly higher than average over the past week. This isn’t surprising given the sharp moves we have seen across the crypto space. With rumors of funds running into trouble, possible liquidations on the horizon, and restructurings the market was on edge. Any brief rallies were met with selling as participants looked to de-risk. As expected, most of the volume was concentrated in the largest and most liquid tokens. BTC and ETH made up nearly 70% of the total volume on the exchange. 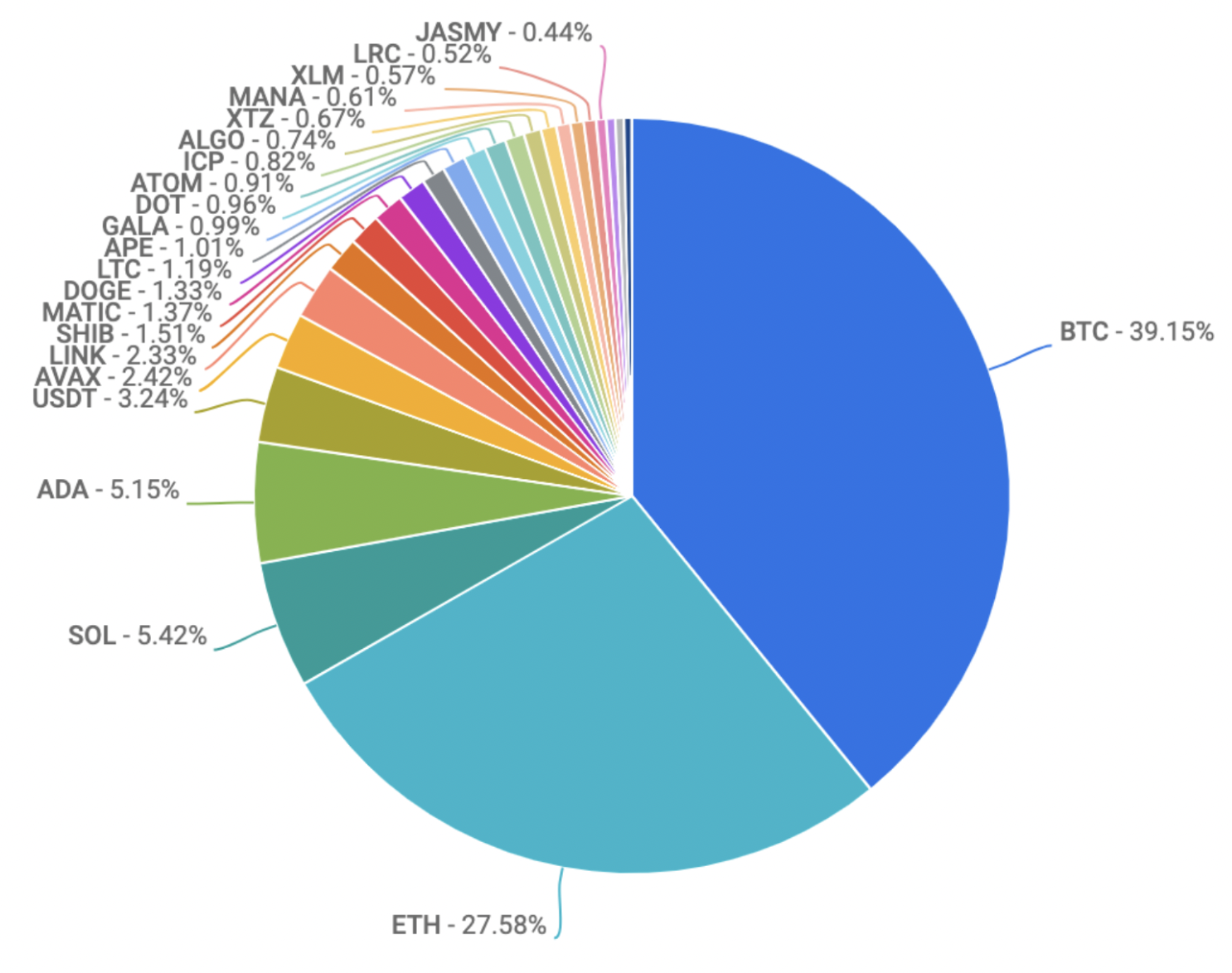 On the CES desk flows have been rather balanced. The larger more persistent sellers have been limited higher and have not chased prices lower. The sell interest that we have seen on the way down has been offset by buyers looking to pick the bottom. A number of traders have mentioned that they are waiting for more clarity around the possible liquidations before stepping in on the buy side. 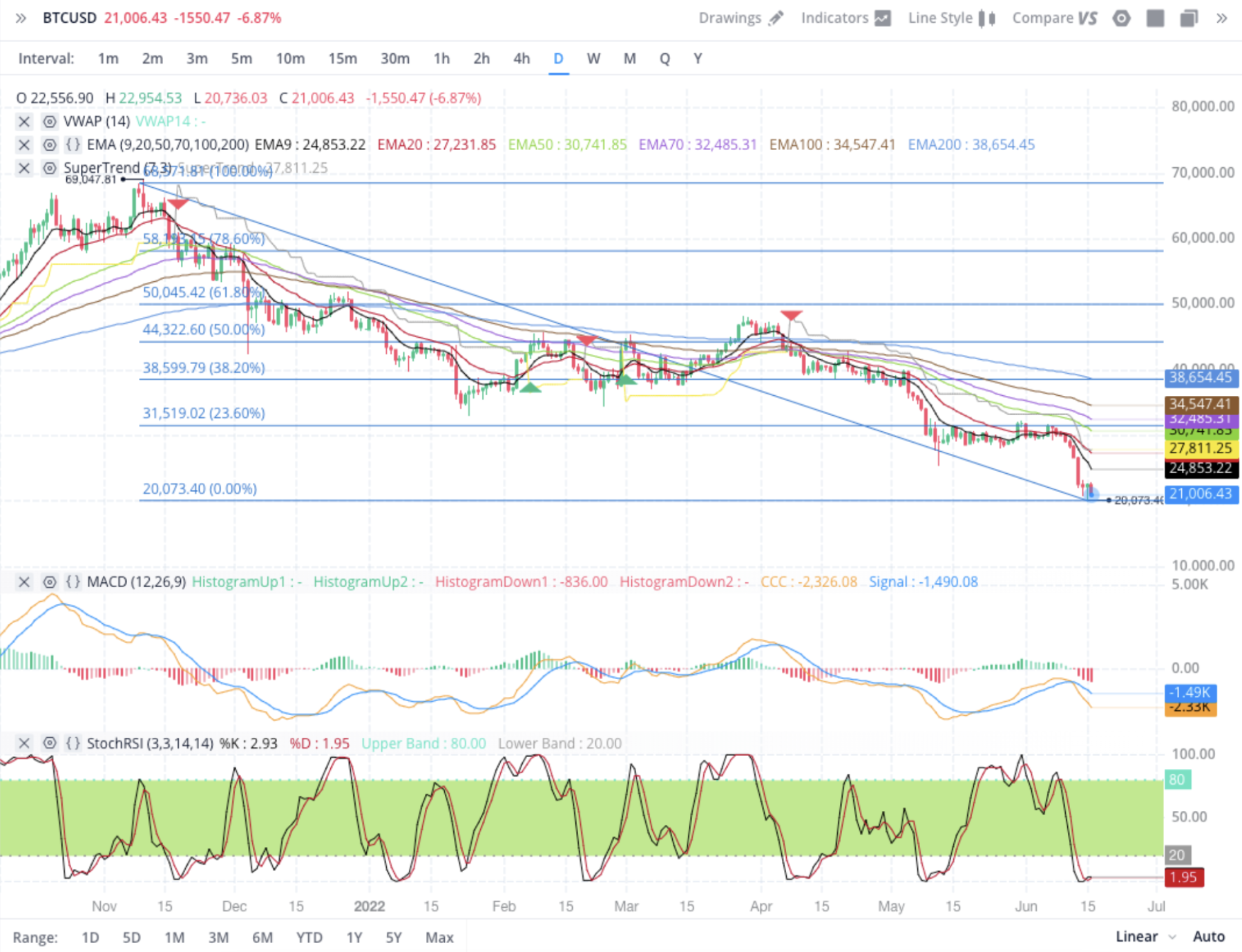 The BTC technical chart remains bearish and is pointing to lower levels for the digital asset. After the EMA9 vs EMA20 cross rejection on June 7, BTC has been red 8 out of 9 days with the only green 1 day candle closing as a dojo pattern. On June 12, the MACD crossed downward with a Supertrend cross of the EMA50 which was very bearish. We could likely see BTC retest the EMA9 at $24.5k but given the bearish global macro picture, that seems unlikely in our view (based on the charts.) The next support for BTC is $17.5k followed by $14.9k. We could test these areas before consolidating between $15k and $18k. The EMA20 is currently crossing the EMA100 on the weekly chart and the Supertrend is close to crossing the EMA50. This sends BTC to a $17.5k support. Once this level is hit, the BTC monthly chart has an EMA9 / EMA20 cross-forming that will be completed.

Japan’s Parliament has passed a new law that would create a regulatory framework for stablecoins, essentially defining them as digital money.

Under the new legislation, which will come into effect in 2023, stablecoins must be linked to the yen or another legal tender and guarantee holders the right to redeem them at face value.

The bill also says that stablecoins can only be issued by licensed banks, registered money transfer agents, and trust companies, with the FSA reporting that regulations governing stablecoin issuers are to be introduced in the coming months. (Bloomberg)

The European Union is closing in on an agreement to regulate the cryptocurrency sector that would establish common rules across the 27 member countries, people familiar revealed, according to a Bloomberg report on Friday.

France, the current EU chair, and the European Parliament are optimistic about resolving a Markets in Crypto-Assets (MiCA) regulatory agreement before the end of this month, the people told Bloomberg, which added that negotiators may meet on June 14 and June 30. (the Block)