We investigate markets trading on rising and falling expectations of a US economic recession, and how that may continue into the next FOMC meeting. 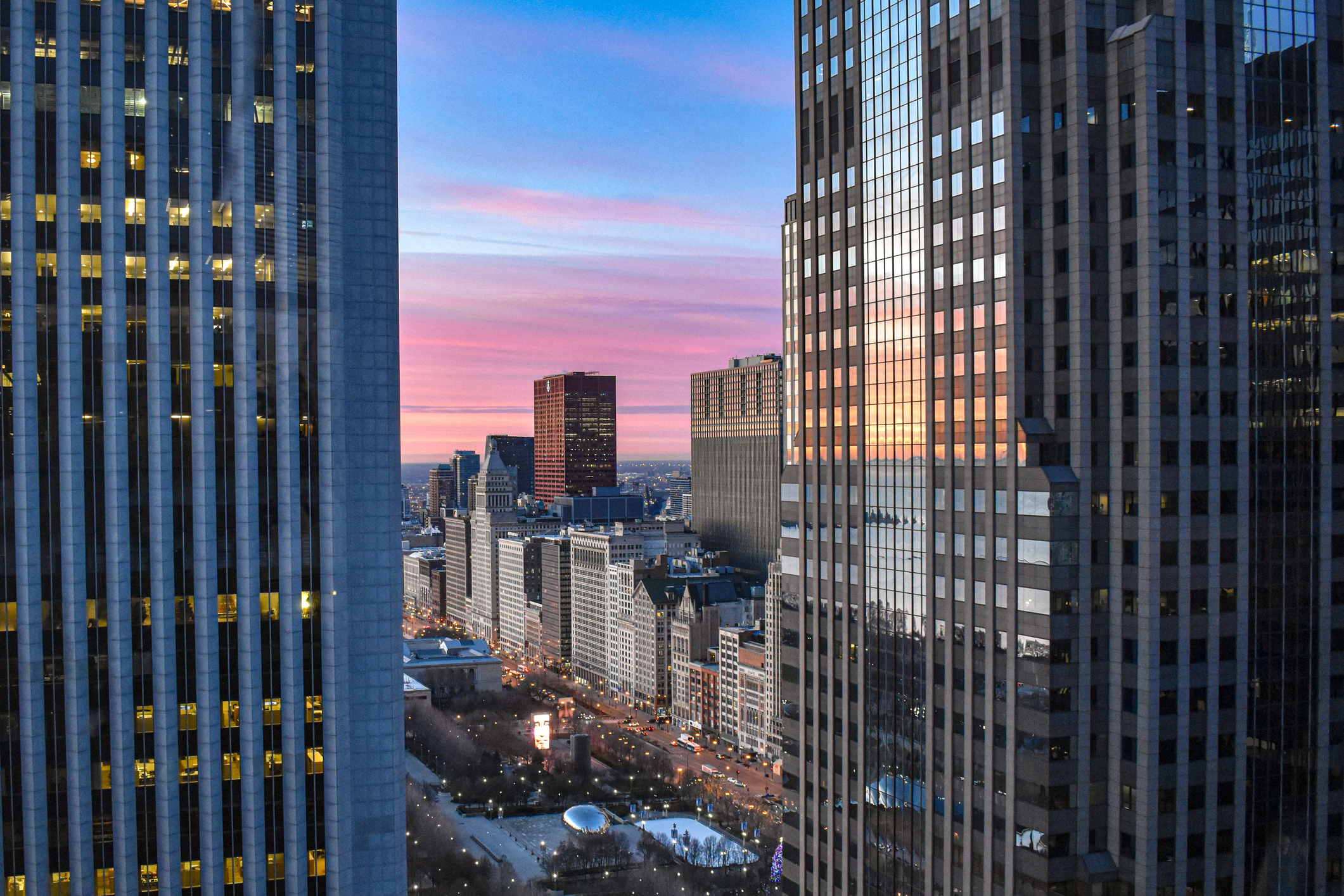 While crypto markets have seen some capitulation in the last few weeks, we think risk assets are likely to trade on a “recession on-recession off” regime ahead of the Fed’s next meeting on July 27.

We’re going to be away for next week’s July 4 holiday in the US, but our weekly market commentary will be back on July 15. In the meantime, please take a look at our Research Portal for an archive of all our institutional research reports.

This month, we’ve taken an inventory of the market exposure to Celsius and Three Arrows Capital as well as looked at how exposed public bitcoin mining companies are to the recent backdrop of falling bitcoin prices, tightening credit conditions and rising energy costs.

After a period of rapid credit expansion from 2020 through 2021, some miners are turning off their machines, liquidating bitcoin reserves, and/or recalibrating their cost structures. Our latest report analyzes the key variables which drive profitability for miners and assesses the level of stress across the industry to estimate current cycle positioning.

While crypto markets have seen some capitulation in the last few weeks, we think risk assets are likely to trade on a “recession on-recession off” regime ahead of the Fed’s next meeting on July 27. That meeting will lead into the next US equities earnings season, where we will likely see future earnings estimates revised lower and multiples compressed, acting as a drag on stock prices. On the other hand, we’ve already seen a lot of risk reduction among digital assets. Crypto performance has been trailing traditional markets with bitcoin trading 1.8 standard deviations below its rolling 1m average, nearly twice the level for the S&P 500 and Nasdaq. Consequently, the correlation between stocks and digital assets has declined from its peak of 80% in early May to ~60%, based on a rolling 40d window (see charts.)

Meanwhile, the liquidation of Three Arrows Capital has been ordered by the High Court of Justice in the British Virgin Islands, though it’s unclear what assets 3AC is still holding. For example, Bloomberg reports that 3AC is the largest current shareholder of Grayscale Bitcoin Trust (GBTC) with 38.9m shares of GBTC’s 692.4m shares outstanding (~5.6%), but that balance may be out of date as a 13G hasn’t been filed since 1Q21. The latest data suggests 3AC had ~$3B in AUM as of April 2022 (down from $18B at its peak), but it’s difficult to disentangle its leveraged position from the underlying capital. The entity liquidated ~$400M of Lido’s liquid staked derivative stETH in June and recently defaulted on a Voyager Digital loan of $670M (15,250 BTC and 350 USDC.)

Moreover, 3AC’s leveraged position in GBTC has contributed to the recent widening of GBTC’s discount to NAV. This week the SEC rejected Grayscale’s proposal (dating back to October 2021 when GBTC was still trading at a 15% discount) to convert its trust to a spot-based ETF. In response, Grayscale CEO Michael Sonnenshein announced that the firm had filed a lawsuit against the SEC and will continue to seek a path towards converting the vehicle to an ETF. As of publication, GBTC’s discount to NAV has widened to 34%, representing ~US$3B of potential capital impairment. Without a timeline for the approval of a spot bitcoin ETF, it’s unclear when investors in GBTC will ever be able to redeem their shares at or above par.

Exchange volumes declined slightly, which is to be expected as we head into the summer. Fortunately the news of trouble at various counterparties is slowing, suggesting to some that we may be through the worst of the deleveraging. We are seeing more dispersion across the tokens traded on the exchange. In times of stress we often see BTC and ETH dominate volumes as traders look to offload their most liquid risk. So it can be seen as a positive sign that interest is picking up in some of the altcoins. 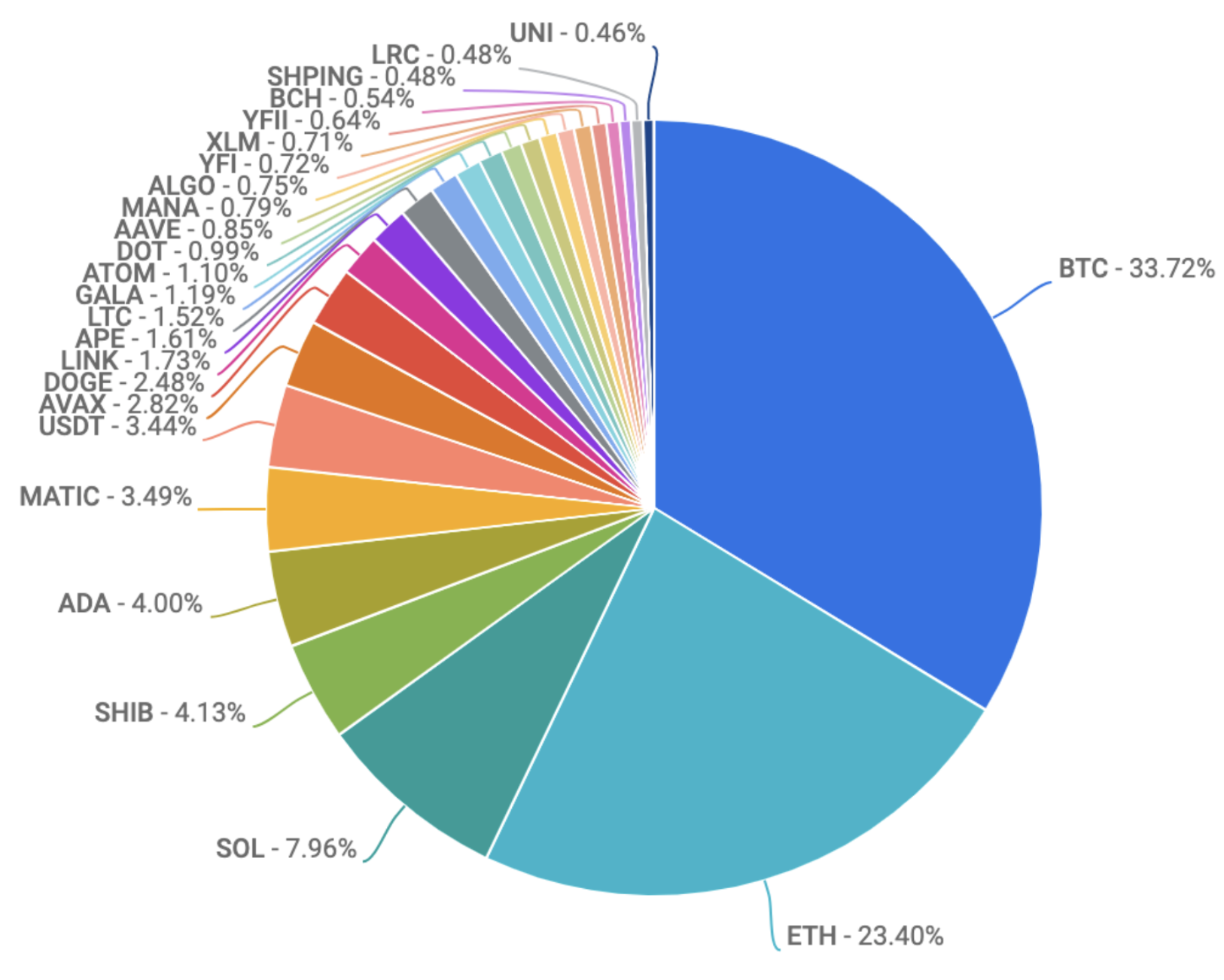 On the CES desk selling has slowed considerably and we are better to buy across the board. However, buyers are not being aggressive. A common strategy is to enter a limit order below the current market price and wait to be filled. It remains to be seen how committed traders will be to these positions if prices turn south again. We have seen a renewed interest in altcoins with some investors accumulating their favorites at highly discounted prices. 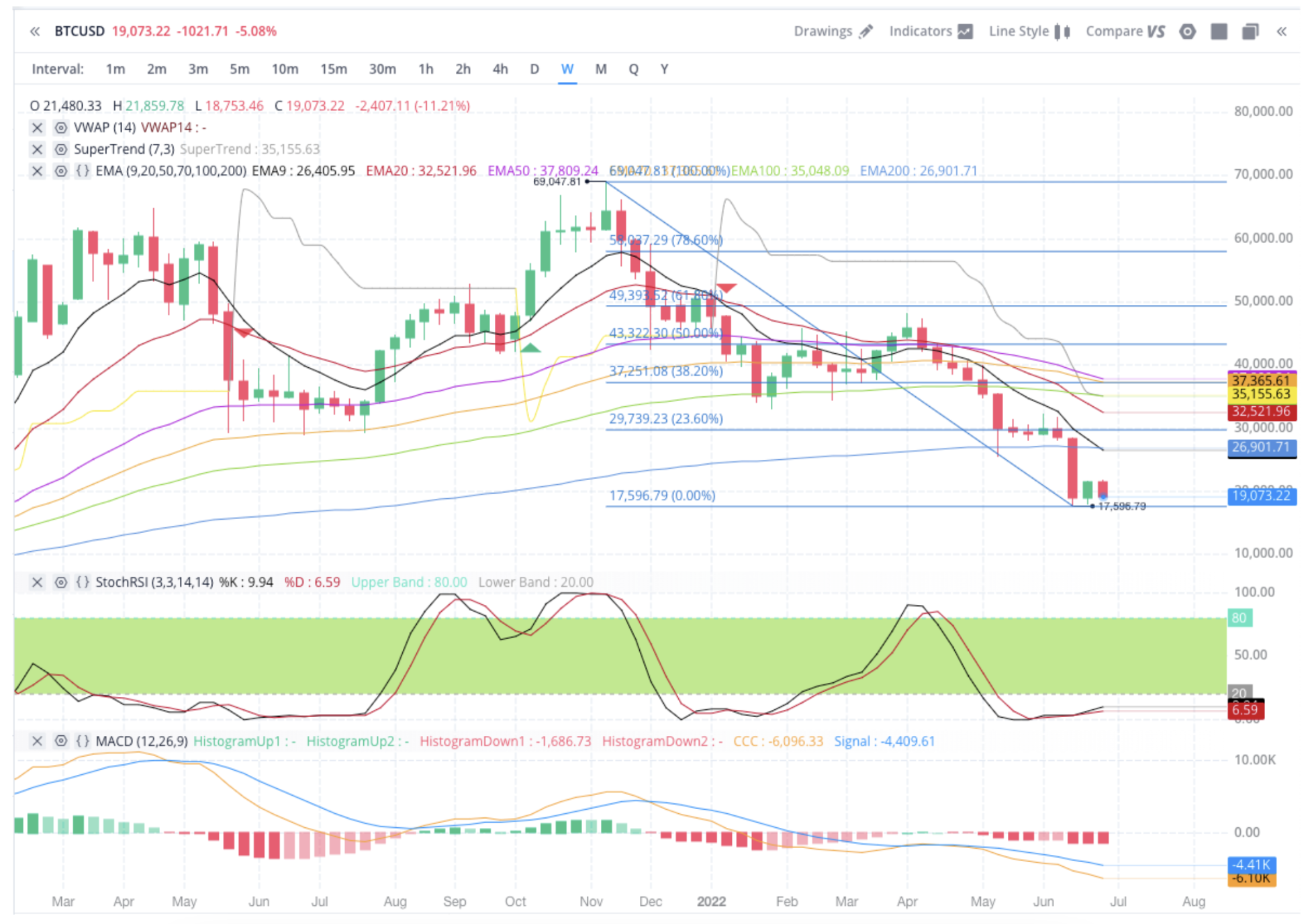 The BTC chart continues the bearish pattern / setup. Currently on the daily chart, BTC has rejected the EMA9 for seven consecutive days and the StochRSI crossed downward on June 28 which should be enough to send BTC support to around the $16k level. BTC hasn't had one close above its EMA20 in 22 consecutive trading days. What is more concerning is both the weekly and monthly BTC charts.

Starting with the weekly chart, the EMA9 crossed the EMA200 on Thursday (June 30) and the EMA50 / EMA70 cross should be completed next week. The last time the EMA9 crossed the EMA200 on the weekly chart was January 19, 2020, roughly one month after the 2018 low of $3,215.20. The monthly BTC chart is by far the most bearish it's ever been. The EMA9 is about to cross the EMA20 for the first time since January 31, 2019. The MACD on the monthly chart isn't close to bottoming out either. With the bearish setups in place and possibly occurring soon, we expect continued weakness in BTC from a technical perspective. If this scenario materializes, we could see the $16k level tested, followed by $13k over the coming days or weeks.

The Monetary Authority of Singapore has reiterated its stance on crypto – that it will be “brutal and unrelentingly hard” on bad behavior in the crypto industry. To do that, it has enforced a drawn-out and tough due diligence process for licensing crypto businesses in order to protect the wider economy. Despite that, it has recently granted in-principle digital token payment licenses to a few crypto firms. (Coindesk)