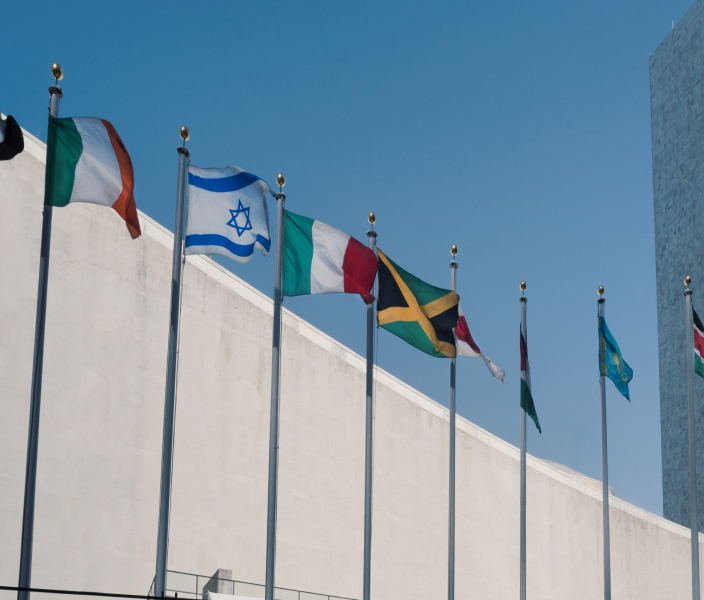 In this week's commentary, we take a look at how the ongoing conflict between Russia and the Ukraine is impacting the crypto market.

The geopolitical risks priced into risk assets appear to be peaking, with the latest developments suggesting that we may be approaching / have approached a short term bottom for crypto asset prices. Indeed, the crypto fear and greed index seems to be in extreme fear territory at 20 vs 46 from last week.

Thursday’s news of open conflict – after Russia announced it was conducting special military operations in the Donbass region – drove crypto prices weaker after a moderate recovery mid-week. Both crypto and stocks appear to be trading in lockstep once again (see chart below.) Already we see bitcoin bouncing back after breaking sharply to c.US$34,200, the midpoint of its previous $32,000-$38,500 range, before recovering to the upside, which seems like a supportive signal in our view. We think a big factor for overall performance is speculation on how long hostilities may actually last. Note too that the max pain prices for the February 25 option expiries is $40,000 for BTC/USD and $3,000 for ETH/USD.

Alternative layer-1s like SOL, LUNA, ADA and AVAX, which had been outperforming core tokens like BTC and ETH in the first half of the week, faced particularly volatile moves after the incursion. Still, LUNA stood out among these as its earlier performance had most recently been supported by idiosyncratic factors - particularly the news that the Luna Foundation Guard (LFG) sold US$1bn in LUNA to raise money for bitcoin backed reserves to reinforce Terra’s UST algorithmic stablecoin. This would act as protection against weak environments where it’s possible to see selling of both LUNA and UST together.

Meanwhile, as a second order effect, these developments are also creating confusion over monetary policy and how the U.S. Federal Reserve will react at the upcoming March 16-17 meeting. The direction of travel (towards tightening) still remains clear in our view, but front loading heavy rate hikes amid the current sociopolitical instability and while the U.S. rates curve is flattening (signaling concerns over recession despite some positive economic surprises of late) seems less likely now after the escalation of tensions on Ukraine’s borders. We think that may also help incentivize crypto retracement.

In our view, liquidity still remains the name of the game for crypto performance, which depends heavily on how the Fed’s stance on quantitative tightening develops with respect to reducing its balance sheet. However, in light of recent events, we think that discussion may be pushed back from the March meeting to May. 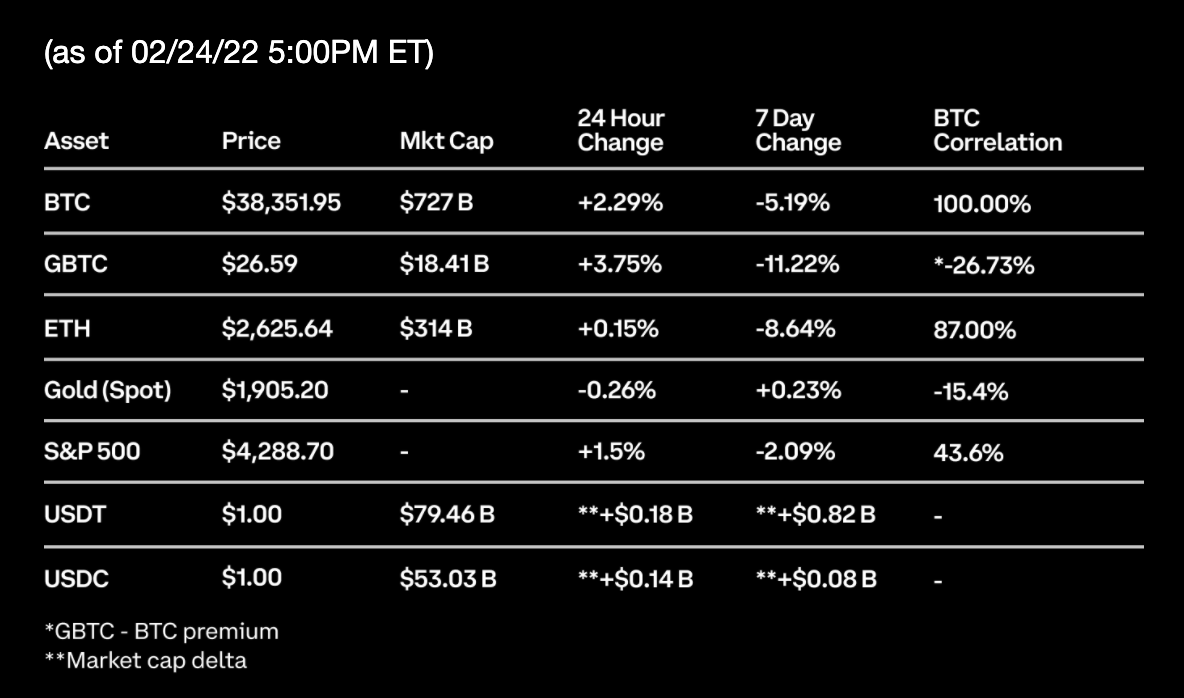 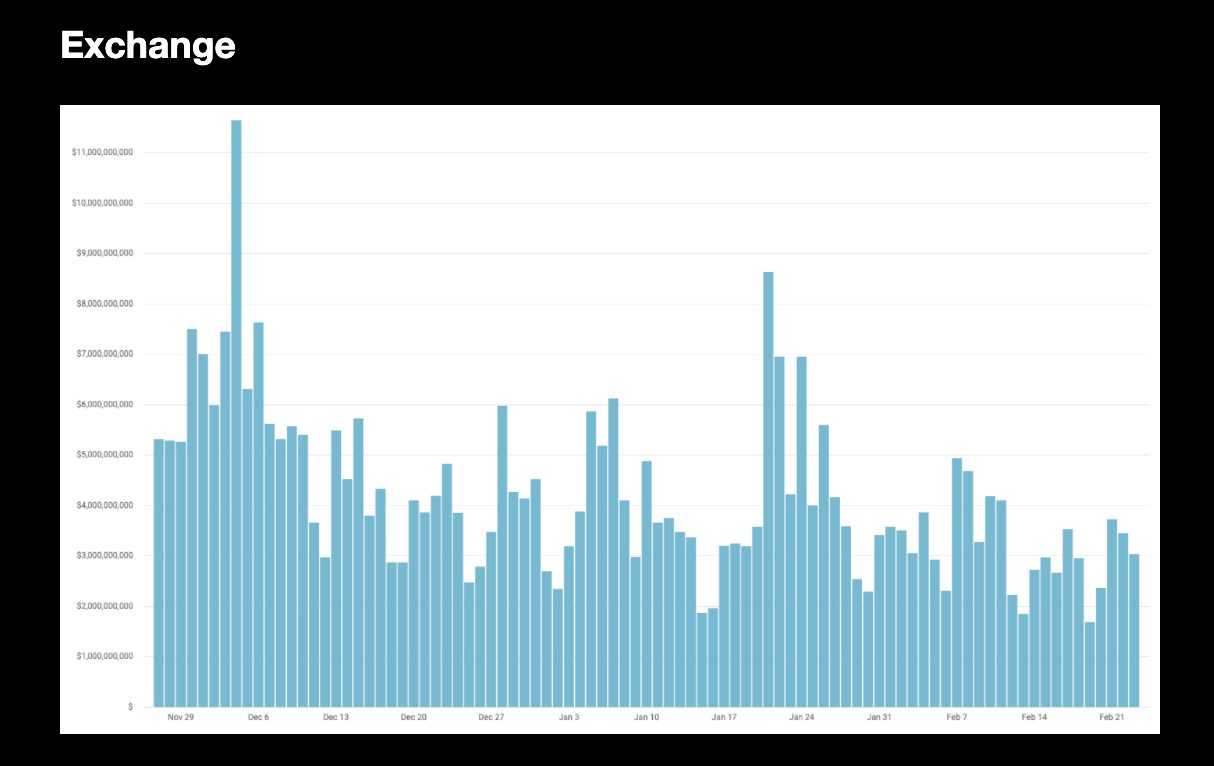 Consumer volumes on the exchange remain tepid despite large moves in the crypto space, suggesting reduced risk appetite and light overall positioning in markets. BTC and ETH make up around 50% of our retail volumes as BTC dominance rises above 43% and the majors continue to lead moves. These are followed by ADA, AVAX and SOL at 4-5% each, suggesting L1 plays are still popular. We expect BTC and ETH will continue to dominate mindshare, especially in times of market stress where there tends to be a flight to quality sentiment. 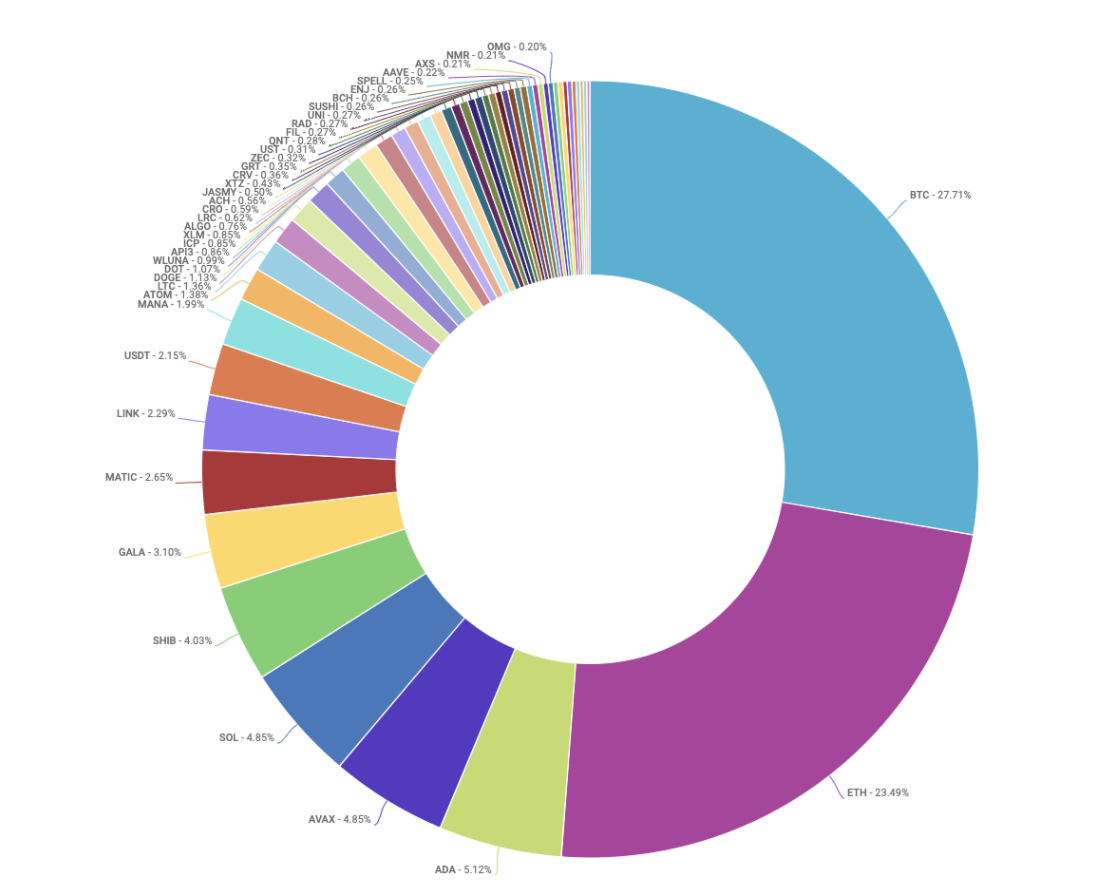 Trading has been extremely volatile amid uncertainty over the Russia-Ukraine situation and headline pingpong going on. Throughout the week, we have seen macro funds and high net worth investors offloading positions in BTC, ETH along with L1s such as SOL, ICP, DOT and XTZ. There has not been much tactical engagement from our client base as we traded within a wide choppy range this week, apart from smaller but persistent demand to accumulate BTC and ETH at lower levels, with most preferring to sit on the sidelines until geopolitical tensions subside. However, as the market pushed lower, resting orders were filled below $35,000 in BTC and $2,500 in ETH.

Cumulative futures open interest (OI) fell from $16bn to $13bn in BTC futures and from $8bn to $6.7bn in ETH futures, based on Skew data. BTC basis traded in a range of -1.44% to 5.9% on CME and ETH basis traded in a slightly wider flat to 8.31% on CME. After Russia announced military operations for an all-out ‘demilitarization’ of Ukraine, we saw BTC fall to lows of c.$34,200 before finding support there twice.

Funding rates on perpetual swaps have been fairly contained in a narrow range of slight positive to mostly negative on exchanges (up to negative 7% annualized which is still low relatively), indicating liquidations of leveraged longs in the past week as well as profit taking on any leveraged short positions over last weekend, leaving us with light positioning. We do not have a strong conviction in either direction and are looking for tactical opportunities in vol markets or when the basis deviates too much in any direction, to trade.

On BTC options, front end vol climbed higher to a max of 75.6% from 52.4% the week prior. This figure was 90.3% in ETH, up from 61.3%. While we’ve been mentioning how longer end implied vols have been stubborn/resilient in previous weeks, we’ve now started to see them move higher in June and September expiries, leading to a steeper downside skew in June expiries for example. Despite this, we’ve seen sellers of vol persist, selling into these moves higher. The preferred trade by options market makers seems to be short vega (longer term options), but we like this combined with a long gamma position (shorter dated) so it covers volatility from Russia-Ukraine as well as the Fed. 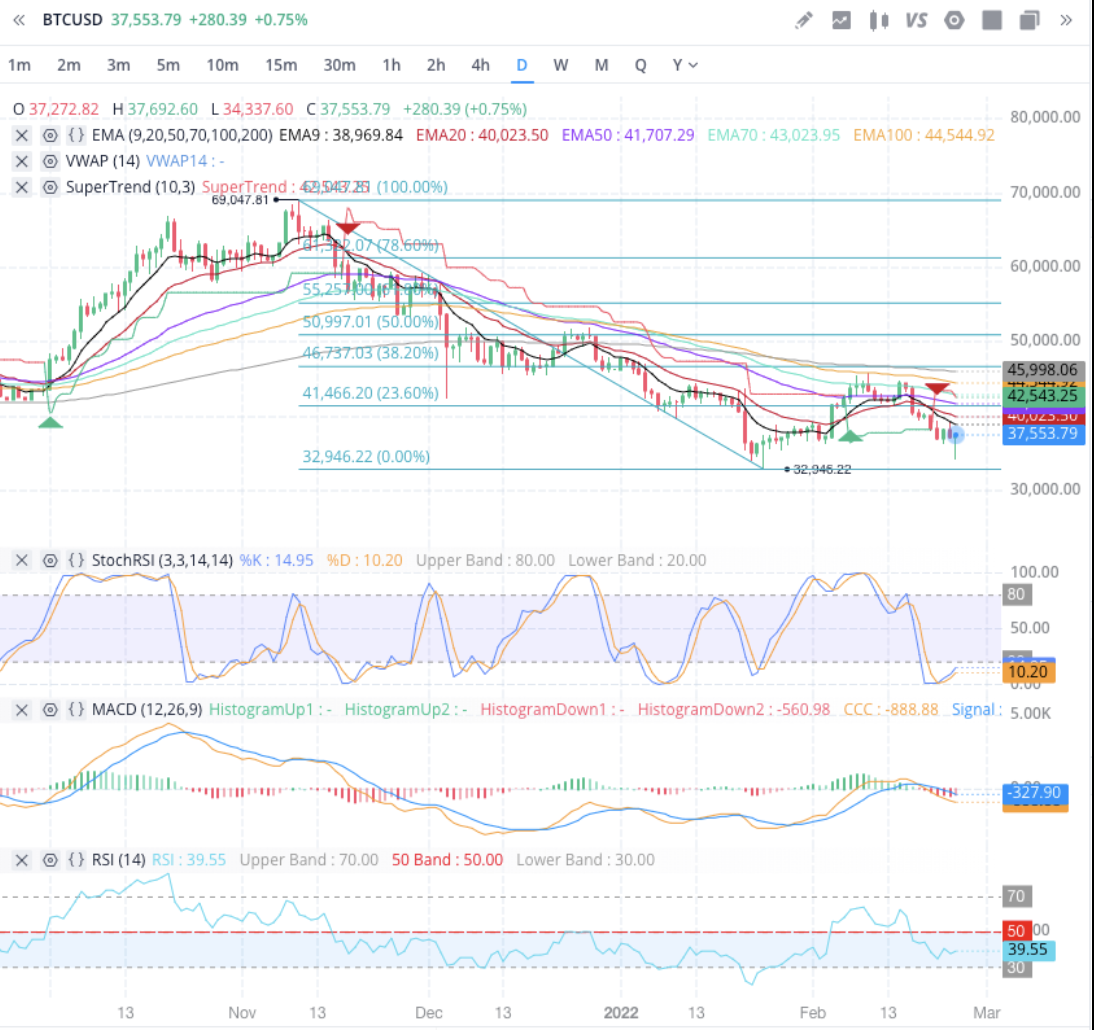 Japan’s Mitsubishi UFJ Financial Group (MUFG), has announced that it plans to suspend and close down its high-speed blockchain payment network venture, GO-NET Japan. It cited difficulty in achieving profitability with the pandemic and its struggle to find a fit in the IoT market. This venture was previously announced in November 2020 in collaboration with Cambridge to improve payment services in Japan. This announcement will not impact MUFG trust banking arm’s plans to issue a yen-pegged stablecoin for instant settlement of securities that was announced in early February this year. (CoinDesk)

Bitpanda, an Austrian based crypto exchange, has acquired U.K. based digital asset custodian Trustology. Trustology holds full crypto asset registration from the U.K. regulator FCA, however the watchdog has since raised concerns, saying it found the company or its ownership to be unsuitable. It remains to be seen how this story unfolds, but Bitpanda has said in a statement that it is “confident that no issues with the acquisition will arise.” (Bloomberg, CoinDesk) 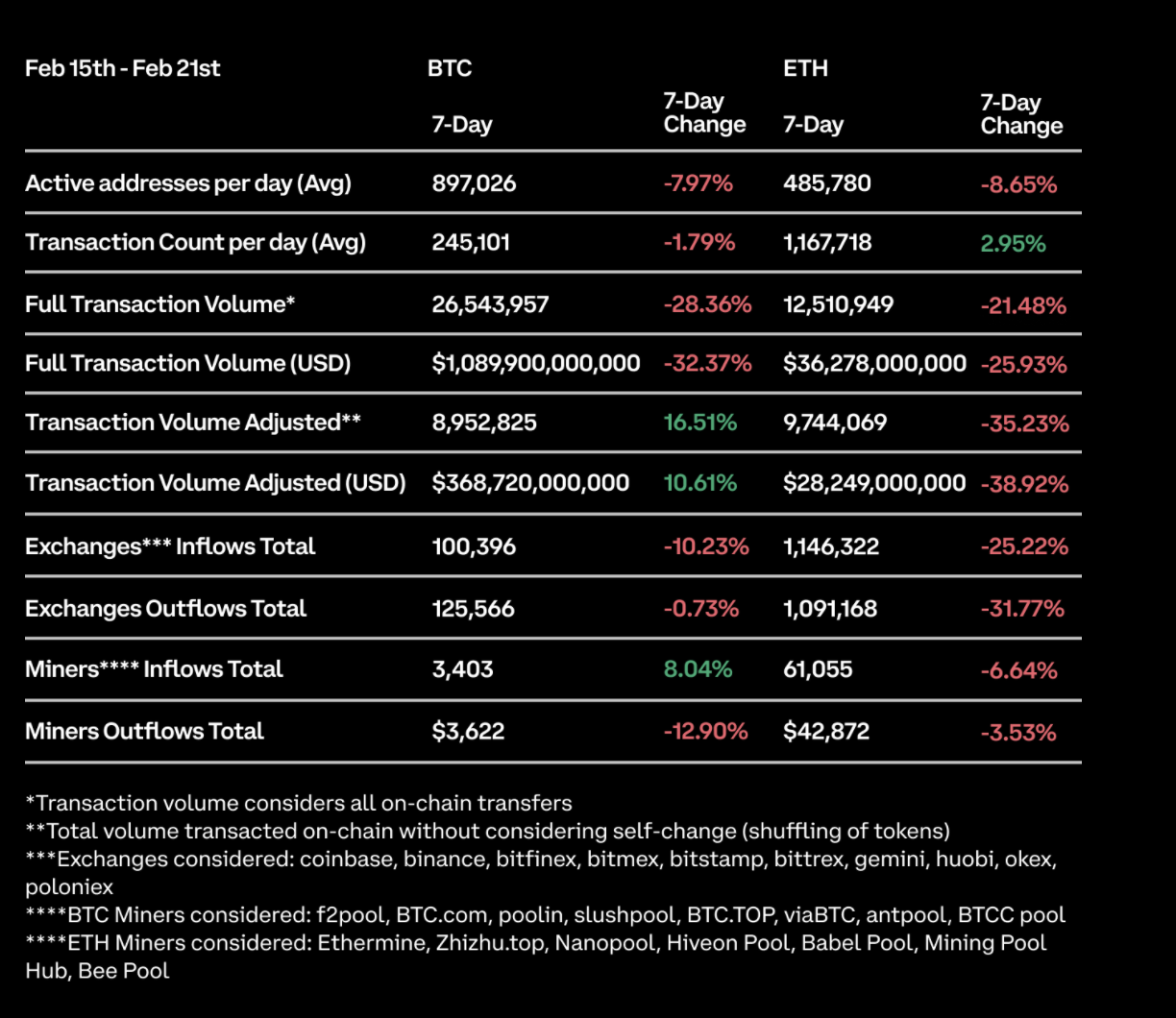 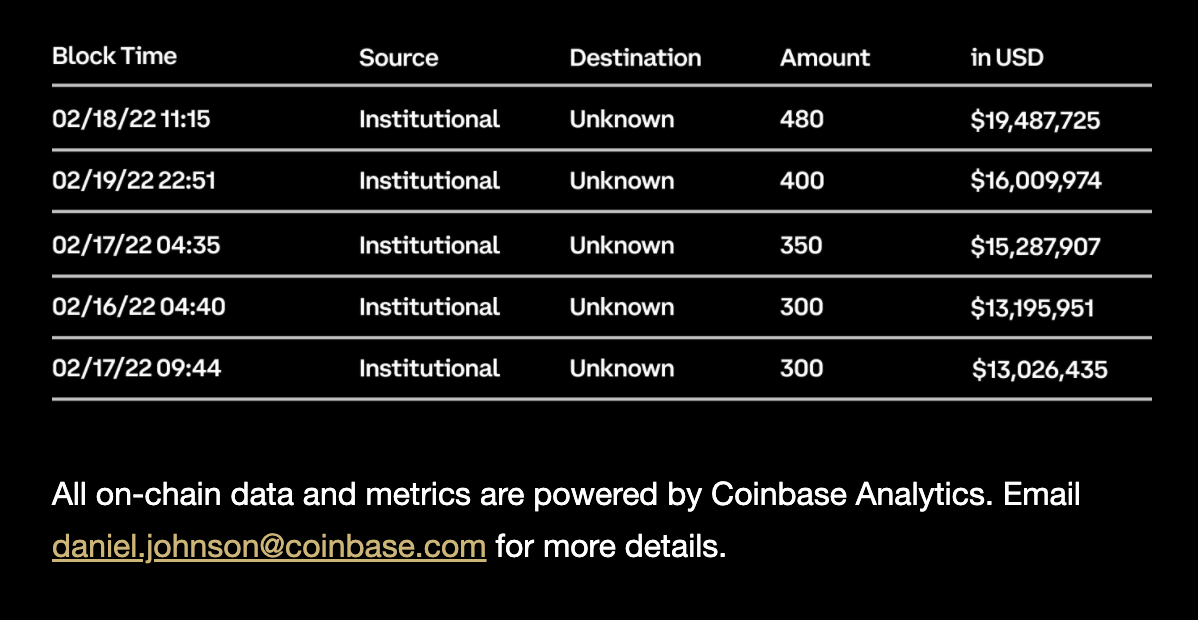 
Hedging risks in a time of uncertainty →
Entanglement→