It's not QT, it's technical

This week we discuss some of the factors driving the correction lower in crypto recently such as the U.S. Federal Reserve’s comments on quantitative tightening, regulatory developments, mixed BTC flows and a stronger U.S. dollar. 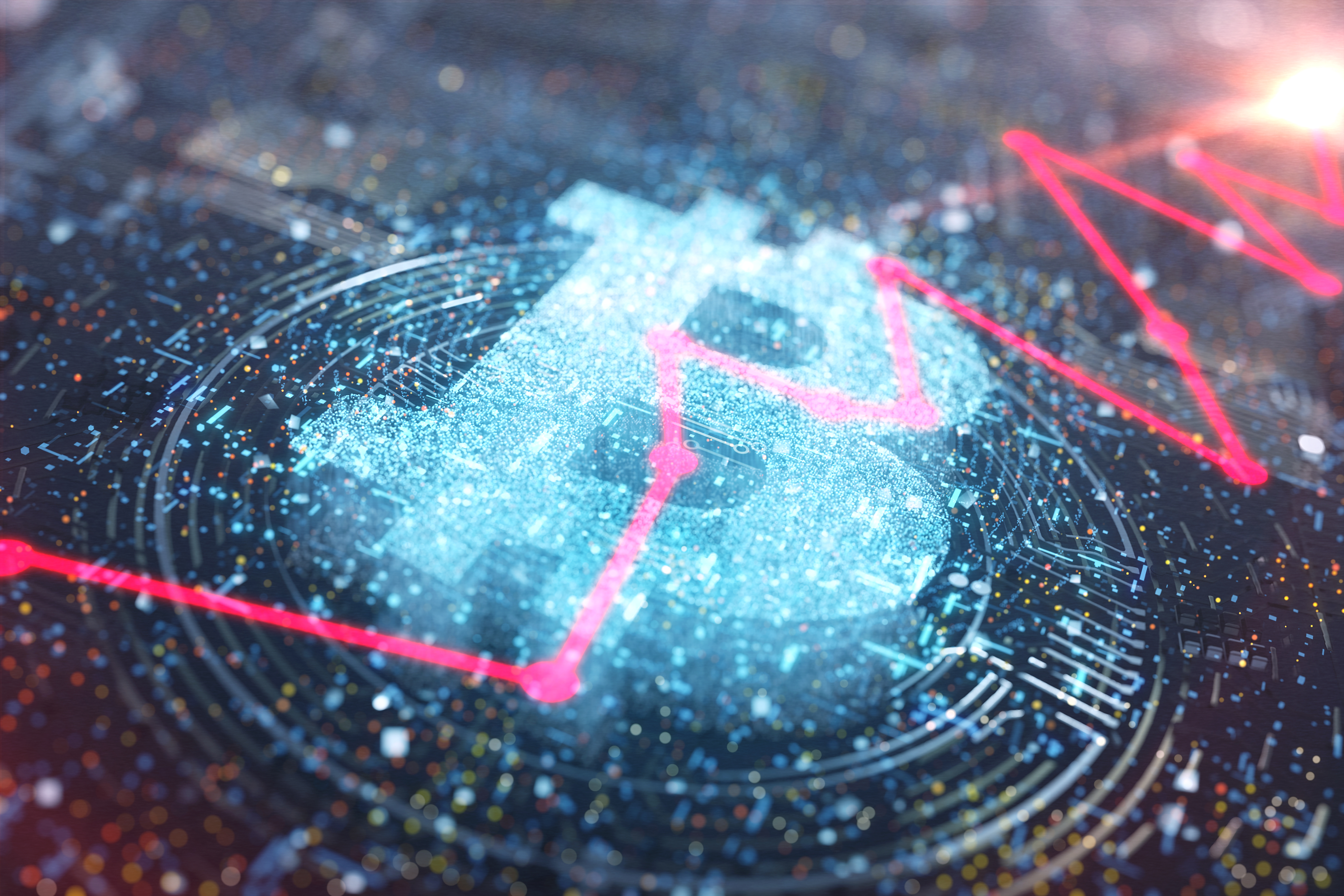 The rising rate environment in the U.S. remains an important test for cryptocurrencies. After a short squeeze higher in markets since the last FOMC meeting on March 16, Fed headlines this week acted as a catalyst for weaker risk assets.

This week we discuss some of the factors driving the correction lower in crypto recently such as the U.S. Federal Reserve’s comments on quantitative tightening, regulatory developments, mixed BTC flows and a stronger U.S. dollar.

We also recently published our monthly outlook titled “Searching for answers in random forests.” Using a machine learning (ML) algorithm, we attempt to identify which variables best explain cryptocurrency returns. Our analysis confirms that by and large idiosyncratic factors tend to be among the most meaningful features for digital asset performance, at least in recent history. Moreover, our analysis suggests that cryptocurrencies offer important portfolio diversification benefits as the factors explaining digital asset returns often tend to be distinct from the factors associated with traditional asset returns.

The rising rate environment in the U.S. remains an important test for cryptocurrencies, with the rates curve pricing in another 190bps of hikes this year. It makes sense then that after a short squeeze higher in these markets since the last FOMC meeting on March 16 – supported by (1) the White House’s executive order on digital assets, (2) month-end and quarter-end rebalancing flows and (3) BTC buying from both the Luna Foundation Guard (LFG) and MicroStrategy’s subsidiary MacroStrategy – Fed headlines this week acted as a catalyst for weaker risk assets.

Nevertheless, the FOMC minutes only confirmed Fed Governor Lael Brainard’s comments on April 5 that the balance sheet will be reduced “quickly” at a pace of US$1.14T per year (or $95B per month). While the headline seems concerning, we have previously argued that the Fed has $1.7T on its balance sheet related to reverse repos representing cash that commercial banks have parked with the central bank. That's a pretty good sized buffer that can be put to work by these banks when the balance sheet runoff begins, which we think gives the market some time before quantitative tightening starts to cause any major pain. Meanwhile, the U.S. 1y breakeven inflation rate has come down but it’s still a whopping 5.50% (in annual terms) which suggests ex-ante real rates remain negative.

The policy backdrop hasn’t been the only driver of the recent correction lower in crypto prices, though we think the move has largely been more technical rather than fundamental in nature – the over 2% appreciation in the U.S. dollar (DXY) index MTD notwithstanding.

Price consolidation started around the same time that LFG temporarily suspended its BTC purchases worth ~$125M per day, although the foundation has since come in with a large 5000 BTC (~$230M) buy on April 6 increasing the BTC holdings in its reserves to 35,768 BTC (~$1.55B.) In fact, we believe LFG has been an important source of BTC outflows from exchanges recently (amounting to 80,481 BTC in March alone based on Coinbase Analytics onchain data.) Note too that LFG is diversifying its reserves with purchases of AVAX as well.

We think the U.S. tax deadline on April 18 is also a significant factor, as last year we saw market players’ selling digital assets to make tax related payments. Meanwhile, there have been some developments on the regulatory front regarding the SEC’s comments about the oversight of stablecoins and the European Parliament’s extension of the travel rule to unhosted wallets. On the upside, we saw a more favorable crypto stance from the UK, where new regulations on using stablecoins as a form of electronic payment are forthcoming.

Some pundits have been putting a positive spin on the SEC’s approval of the Teucrium Bitcoin Futures Fund application, which was filed under the Securities Act of 1933 unlike the previous two BTC futures ETFs that had been approved under the Investment Company Act of 1940. The idea is that a BTC spot ETF would fall under the authority of the Securities Act of 1933, so Teucrium’s approval could be a precursor to the approval of a BTC spot ETF in the U.S. However, we do not believe this necessarily reflects a change in the SEC’s stance regarding spot ETFs, particularly after it rejected several such applications at the end of last year.

We also think the Ronin Bridge (between the Ethereum and Ronin networks) attack attracted some public attention because of the size ($624M) and the fact that it took several days before it was discovered. However, the impact on the crypto markets was isolated given that unlike the Wormhole exploit before it, this attack was caused largely because of human error rather than the protocol itself.

Leverage reduction has been visible on the derivatives side, where we have seen the BTC rolling 1m basis fall from 5% on the CME at the end of March to 1% as of April 7 with futures open interest across exchanges declining by $1B. The ETH rolling 1m basis similarly fell from 5.5% to almost zero during the same period, though the drop in open interest was more shallow. Finally, perpetual swap funding rates are on average negative for both BTC and ETH contracts (-0.5% for BTC and -0.7% for ETH).

Weekly exchange volumes have been steadily growing for the past 4 weeks and hit a 2 month high of just under $25.6B traded the previous week.

Drilling in, BTC accounted for 25% of volume and ETH for 23%. SOL volumes accounted for 8% of exchange volume this past week, up almost 100% vs the proceeding 21 days. In light of the little volume in SOL through the CES desk and the resulting price action in the past few weeks, we believe moves have been driven predominantly by retail clients. 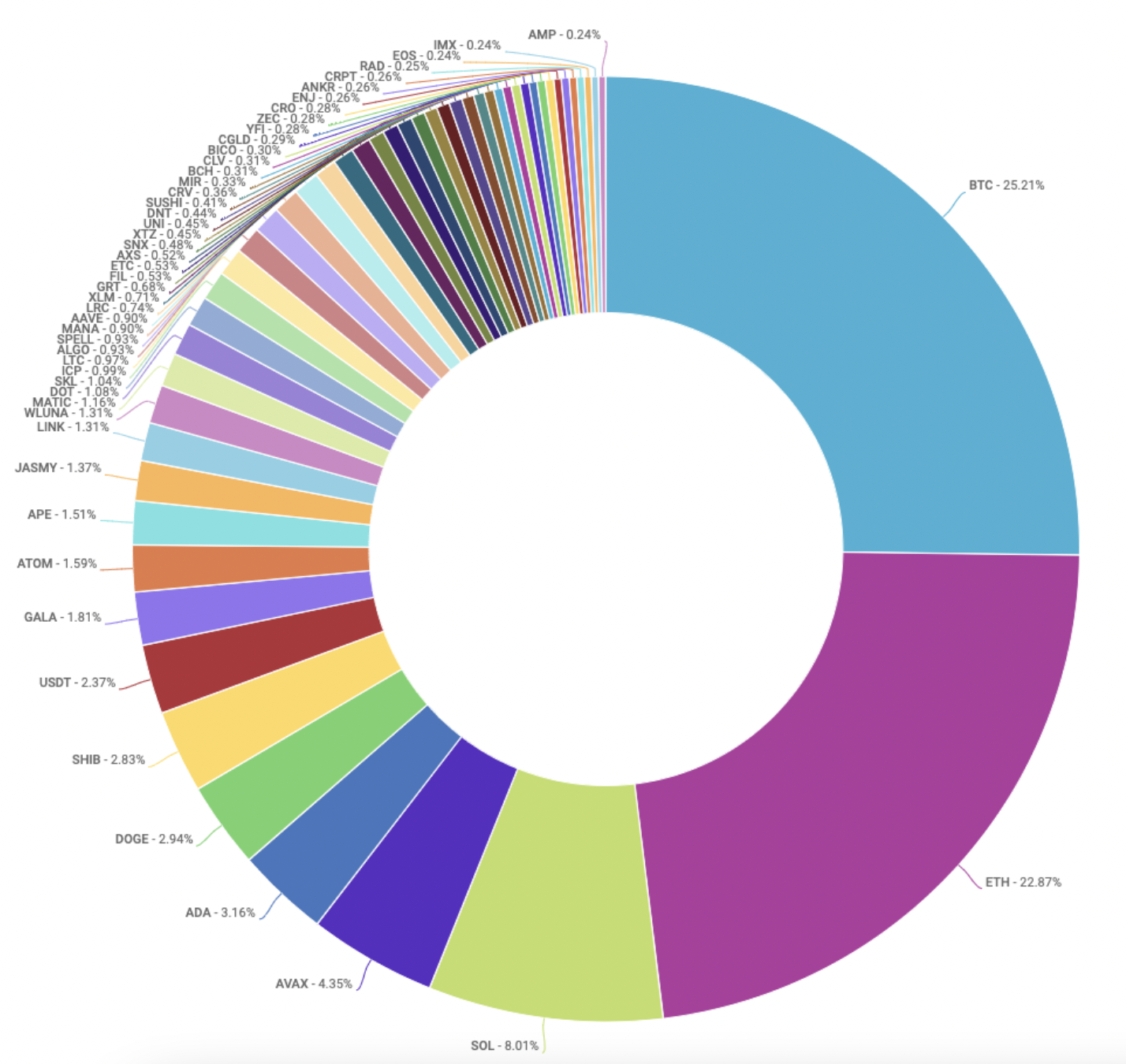 Through the execution desk, flows had been skewed heavily to the buy-side for both BTC and ETH at the start of the week. The tables turned late Tuesday into Wednesday as comments from Fed Governor Brainard on “quickly” reducing the size of the balance sheet triggered flows moving to the sell-side.

In other tokens, we have seen incremental buyers of LINK, LTC, AAVE, and sellers of XTZ, SUSHI, and LQTY this past week.

Anecdotally outside of flows, following the success of the Kiln testnet, conversations around the ETH 2.0 merge are gaining traction among institutional clients looking to understand the timelines and implications ahead. This may lead to increased bullish sentiment and positioning over the coming weeks and months ahead.

Views From Around the World

The Singapore Parliament passed a law on Tuesday that requires overseas-only crypto businesses based in Singapore to be licensed. Currently, these crypto entities are not regulated for anti-money laundering and countering terrorism financing. A similar law is already in place for crypto firms that operate within Singapore. (Bloomberg)

Intel has launched its second-generation bitcoin mining chip, called “Intel Blockscale ASIC,” which allows for blockchain applications to scale their computing power without compromising on sustainability. This is especially relevant now as increasing attention is being paid to the environmental impacts of Bitcoin mining. (CoinDesk)

The European Parliament approved provisions to the Transfer of Funds Regulation which would require crypto service providers, such as crypto exchanges, to verify the identities of the owners of unhosted wallets with which they transact in advance of a transaction. Ahead of the vote, Coinbase published a blog post highlighting some misconceptions regarding the basis of the provisions.

As The Block reports, the next step is for the provision to be put forward to the Council and Commission, who are considered "more technically savvy and less politically exposed than Parliament." (The Block, Coinbase Blog)

Elsewhere, the U.K. chancellor Rishi Sunak set out his vision to transform the country into a ‘global hub’ for crypto, which includes an intention to recognize stablecoins as a valid form of currency. Sunak added that embracing crypto assets will ensure that the UK’s financial services industry is “always at the forefront of technology and innovation.”

Many remain skeptical as this week the Bank of England governor called out crypto as the “new front line for scammers" and the financial regulator (the FCA) crypto license continues to be a burden for crypto companies, many of which have sought fresh pastures abroad. (CityAM)