We examine the evolving composition of Tether’s reserves as well as the broader fluctuations in terms of stablecoin market share. 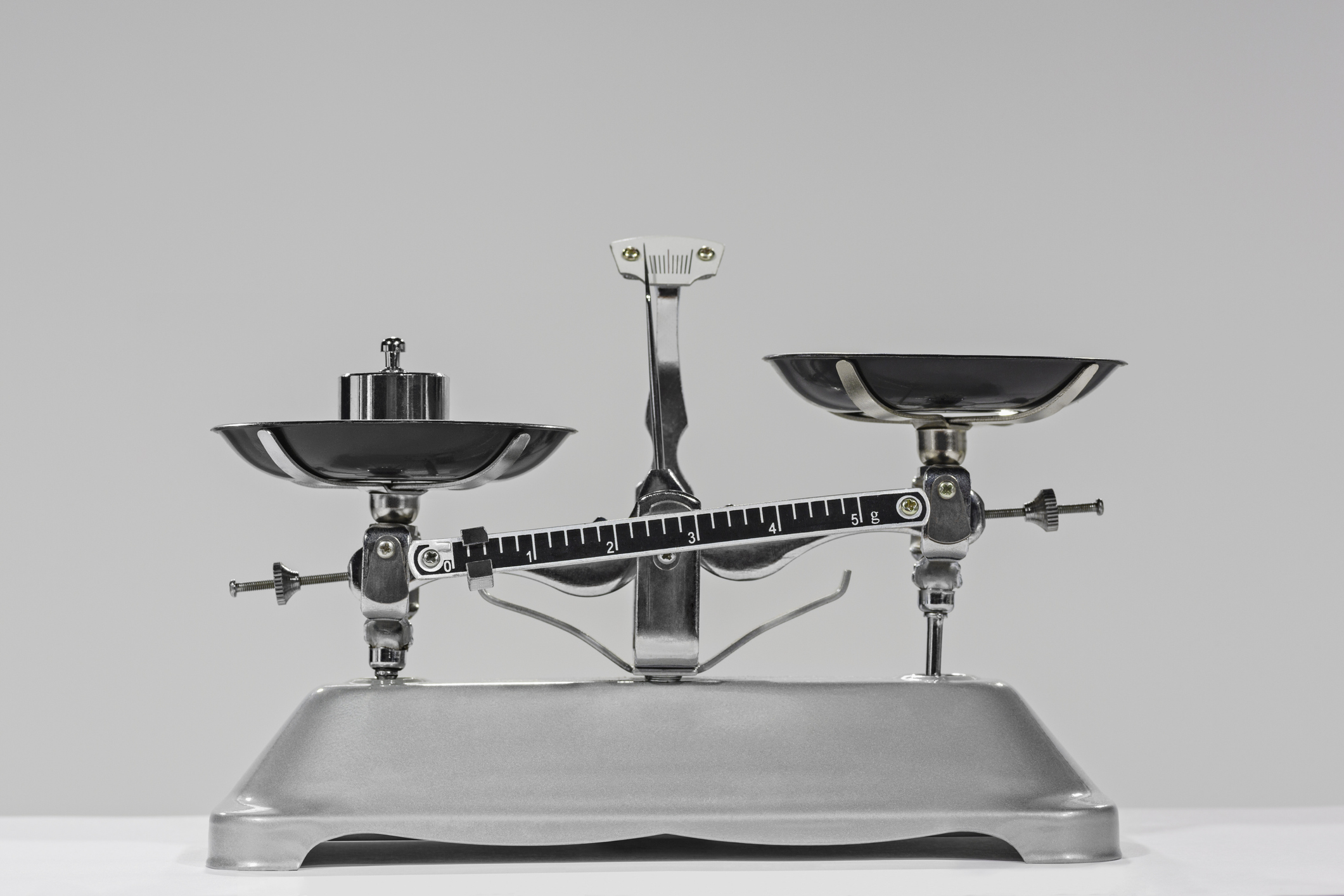 Tether announced last week that it has eliminated commercial paper from its reserves backing the dollar-pegged stablecoin, USDT.

This week we examine the evolving composition of Tether’s reserves as well as the broader fluctuations in terms of stablecoin market share. We also discuss some new technological endeavors across the industry including a peer-to-peer communications platform and an alternative layer 1 blockchain.

Separately, please take a look at our recently published Tokenomics report, which analyzes the Cosmos network and tokenomics of ATOM, while exploring possible implications of proposed upgrades which could influence the fundamentals of the ecosystem.

Finally, the institutional research team hosted its latest ask-me-anything webinar on October 20 – please stay tuned for the recording which will be posted to the Research Portal.

Tether, the world’s largest stablecoin issuer, announced last week that it has eliminated commercial paper from its reserves backing the dollar-pegged stablecoin, USDT. In response to long-standing criticisms of the company’s transparency with regard to the quality of its reserves (specifically the level of risk associated with its commercial paper exposure), the firm has been publishing attestation reports over the past several quarters. While these reports conducted by accountancy firms hired by Tether do not necessarily constitute a formal audit (as certain regulatory agencies and courts have requested), the reports do indeed depict that Tether has been divesting its commercial paper holdings over the past several quarters.

As shown in Chart 1, Tether’s commercial paper exposure has steadily decreased this year, declining from ~31% of total reserve holdings to ~24% by the end of 1Q22 and falling further to ~13% by the end of 2Q22 (when the most recent attestation report was published). While the attestation report for the end of 3Q22 is yet to be published, the firm now claims their commercial paper exposure is down to zero. These holdings have largely been replaced with US Treasury Bills, which aligns with the firm’s stated goal of backing USDT with the most secure, liquid assets in the market. According to Tether, US Treasury Bills now comprise the majority of its reserves backing USDT. Notably, the stablecoin issuer has stated it plans to increase its reporting frequency from quarterly to monthly by the end of the year. 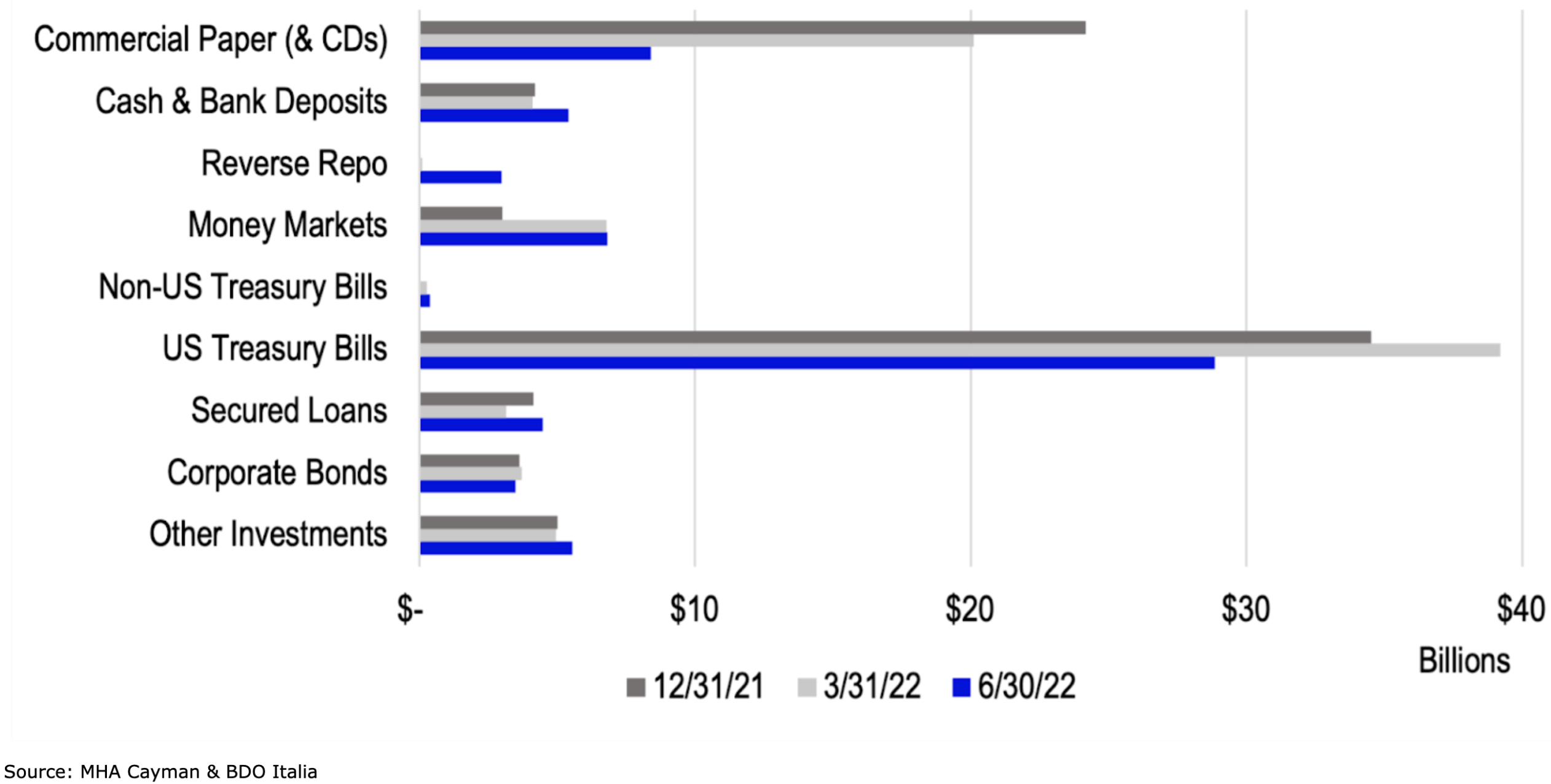 Amidst calls for increased transparency, USDT has lost meaningful market share over the past few years. Since the beginning of 2020 – excluding stablecoins outside the top four in total market capitalization – USDT’s share of the stablecoin market has declined from ~88% to ~48% at current. Conversely, USDC has increased its share of the market from ~11% to ~32% over the same period. Notably, this years-long trend in terms of dominance has slightly reversed since the beginning of August as USDT’s market share has risen from ~45% to ~48%, while USDC’s market share has declined from ~37% to ~32%. Possible drivers of this shift include the OFAC sanctions targeting USDC addresses associated with Tornado Cash announced in early August, as well as Binance’s decision to convert its users’ USDC to BUSD in late September. Moreover, BUSD, the stablecoin issued by Binance, and DAI, the leading decentralized stablecoin issued by MakerDAO, have grown from relative obscurity in early 2020 to ~15% and ~5% of the current market, respectively. In related stablecoin news, Coinbase announced earlier this week that it will waive commission fees when customers buy or sell USDC via any fiat currency on the platform, reflecting an ongoing effort to lower the barriers for international adoption of USDC.

Chart 2. Stablecoin dominance (among the top stablecoins by market cap)

Building through the bear

Tether as a company is no stranger to crypto bear markets. This time around, they’ve embraced the industry’s collective mindset of building new products and services during times of broader market distress. In partnership with their sister company Bitfinex, and the peer-to-peer (P2P) infrastructure platform Hypercore, Tether recently unveiled a new project called Holepunch.

Holepunch aims to be a P2P communications platform allowing developers to build applications with robust assurances of censorship-resistance and privacy. Initially, the project plans to use (non-blockchain) open-source code to construct a platform for P2P applications, beginning with a Zoom competitor called Keet. The ultimate vision for Holepunch is to facilitate all sorts of applications ranging from search engines to virtual private networks (VPNs). Alpha testing is ongoing and Tether plans to open-source the code towards the end of this year.

Interestingly, while the protocol is theoretically being designed as blockchain agnostic, Tether ultimately plans to integrate Holepunch with Bitcoin’s Lightning Network (LN), facilitating the use of USDT or Bitcoin for payments in these newly created applications. While the Lightning Network has shown immense promise with respect to payments to and from merchants, as well as remittances, the integration of the LN within a platform of P2P applications could demonstrate whether the LN has the capacity to effectively service the realm of Web3 applications.

Volumes continued to decline across venues. Additionally, realized volatility in the space has compressed with 30 day BTC vol around 35%. BTC and ETH make up the largest portion of on-exchange volume as focus in the space becomes more macro driven. 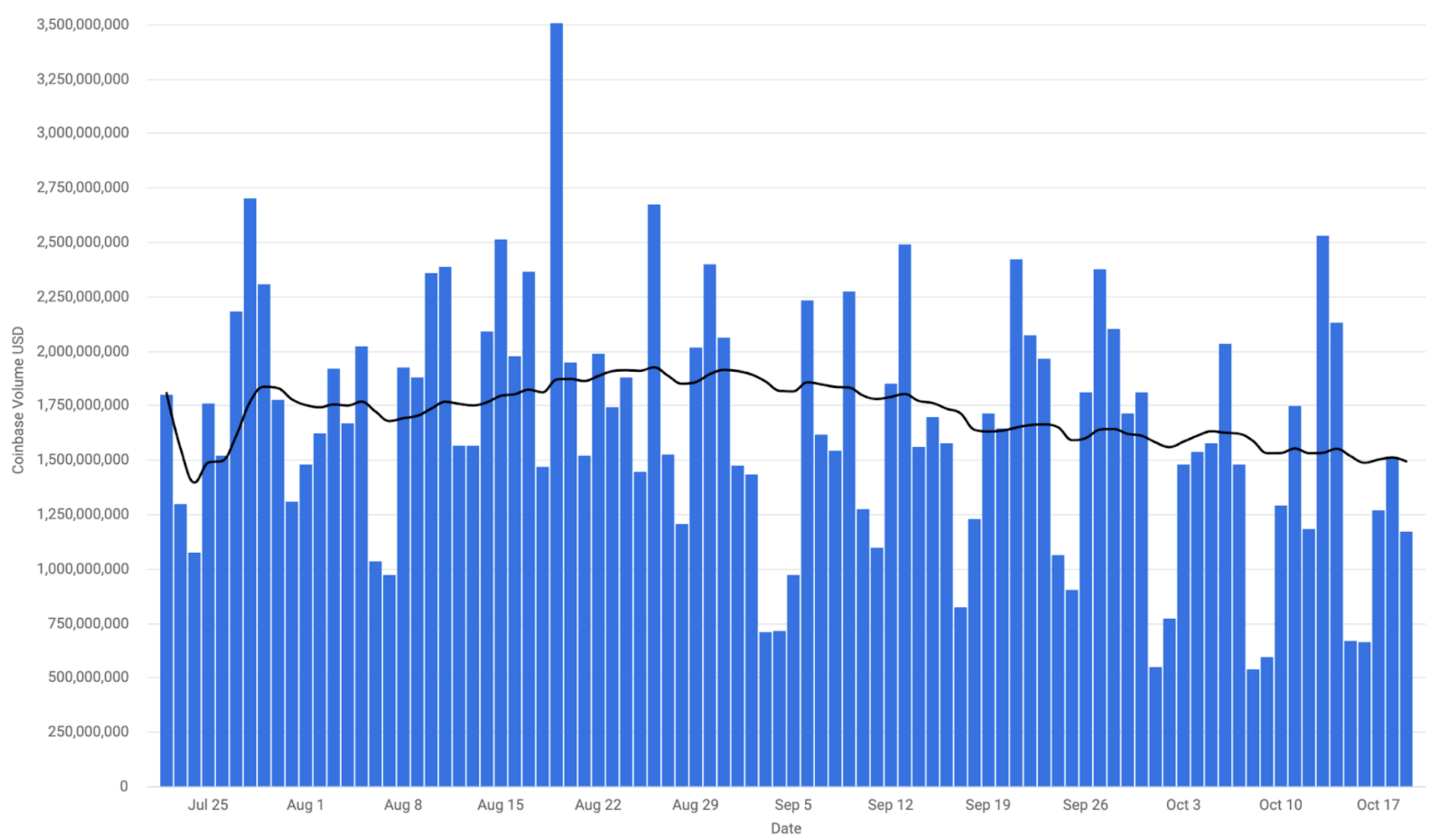 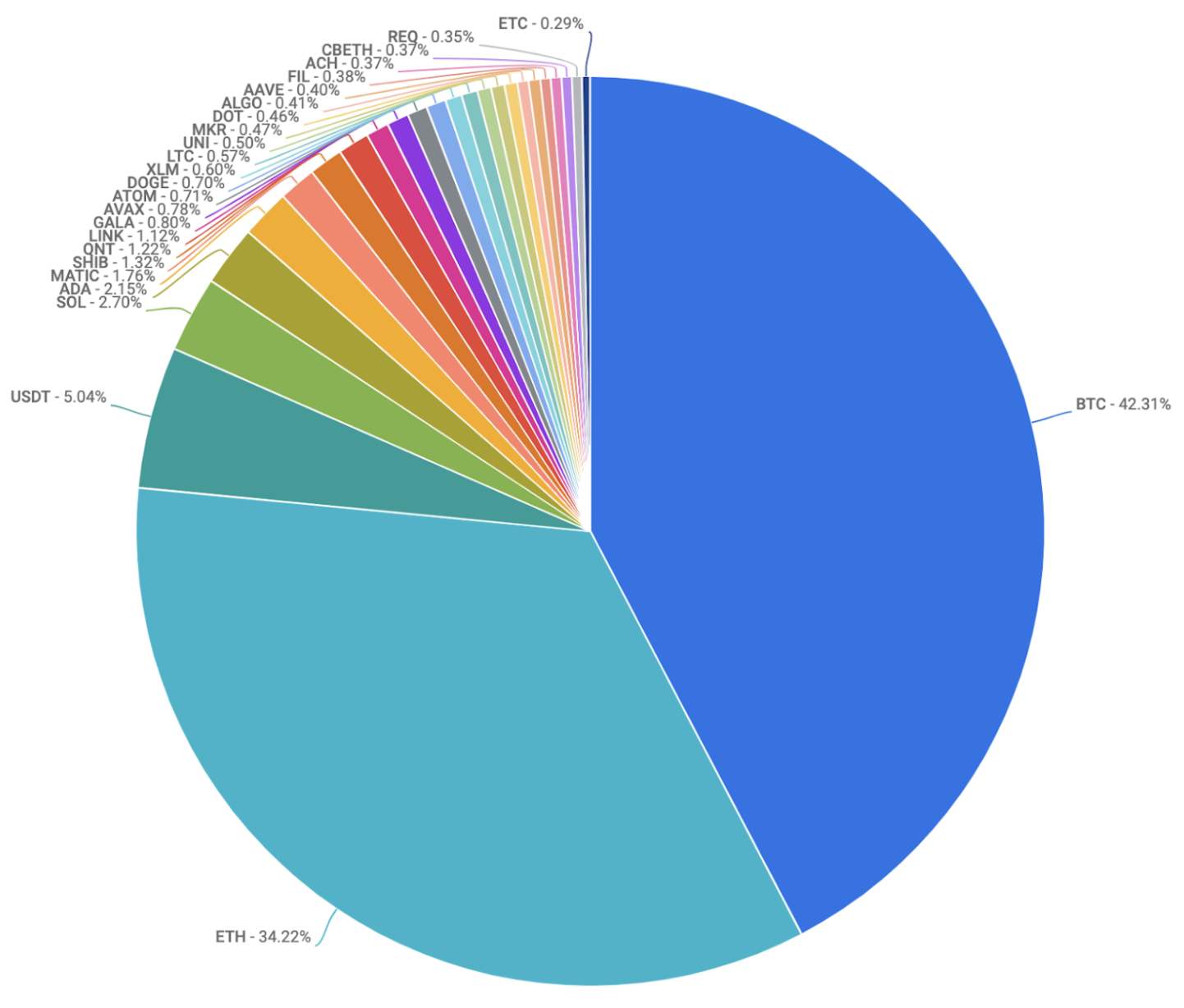 Flows from traditional hedge funds have been balanced. Private wealth returned to the buy side after being net sellers over the past two weeks. Crypto focused VCs and asset managers remain strong buyers across the ecosystem with Identity and Scaling being the sectors of focus. We have seen miners continue to sell to fund and de-risk operations.

Earlier this week, the alternative layer 1 blockchain, Aptos, launched its mainnet. Developed by former members of the team from Diem (Meta’s crypto project that was shut down earlier this year), the highly anticipated project raised some concerns from the broader crypto community regarding transparency, as the project’s tokenomics were not available to the public until the morning after the mainnet launched. Nevertheless, the initial total supply of Aptos tokens (APT) at mainnet was 1 billion tokens, with an initial supply distribution as follows:

In addition, newly issued APT distributed as rewards for validators working to secure the network will increase the total supply of APT to over ~1.5 billion tokens over the next decade. The entirety of the tokenomics and corresponding vesting schedules for each cohort can be found here.

Japan plans to make it easier to list virtual coins as soon as December this year. Crypto exchanges may soon list coins without going through its lengthy screening process, unless the tokens are new to Japan’s market. The latest measure is intended to help revitalize Japan’s crypto assets markets and the Web3 space. (Bloomberg)

The European Union is set to develop an energy efficiency label for blockchains. The European Commission has introduced these measures as part of wider plans to control the energy consumption of the ICT sector, including an environmental labeling scheme for data centers, an energy label for computers, and measures to make clearer how much energy telecoms services use. (Decrypt)

While the European Union proceeds with smoothly passing its landmark crypto framework, the Markets in Crypto-Assets (MiCA), through the legislation phases, its financial services chief is urging her United States counterparts to keep in step to ensure the forthcoming regulations will be global, not local. (Cointelegraph)