Of macro and miners

This week we assess the current macroeconomic environment and look ahead to some key market events related to inflation and interest rates. 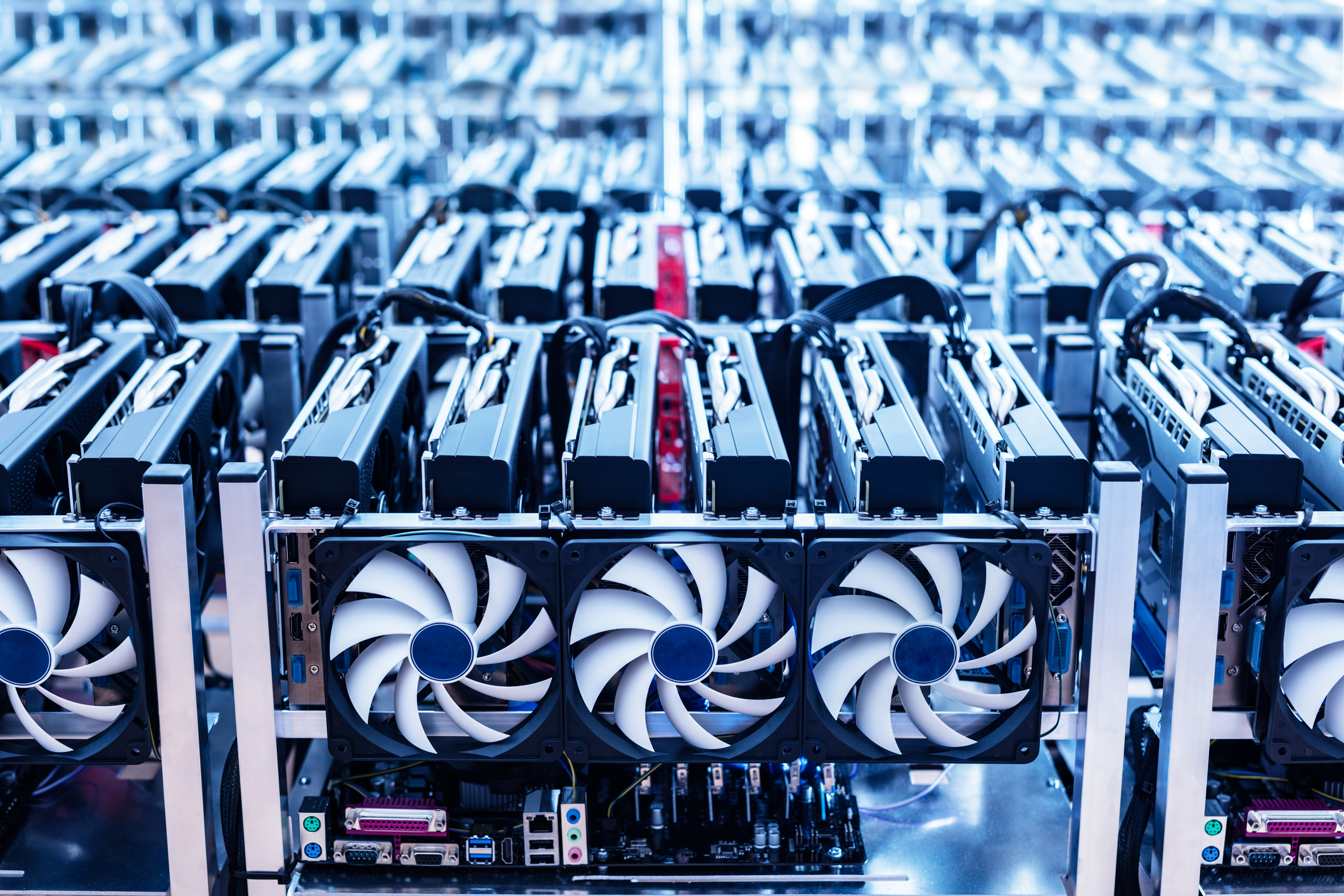 The important market events in the coming week are likely to be the US CPI print on December 13 followed by the Federal Reserve’s policy decision on December 14.

This week we assess the current macroeconomic environment and look ahead to some key market events related to inflation and interest rates. US financial conditions have been easing aggressively in recent weeks, which we think may encourage Fed hawkishness in spite of a slower pace of hikes. We look at the implied volatility levels of BTC and ETH options within this context.

Elsewhere, as the dust continues to settle around the collapse of FTX, lawmakers in the US are gearing up for the process of determining resolutions for creditors and depositors of the exchange, beginning with a House Financial Services Committee hearing scheduled for next week.

We also provide an update on the bitcoin mining space and discuss the implications of the downward difficulty adjustment observed on December 5th.

The important market events in the coming week are likely to be the US CPI print on December 13 followed by the Federal Reserve’s policy decision on December 14. The median Bloomberg survey forecast of November’s inflation print is 0.30% MoM (7.3% YoY), currently below the Cleveland Fed’s nowcast projection of 0.47% MoM (7.5% YoY). Incidentally, we could see some of those expectations revised after the US PPI data is released on Friday morning (December 9), which may limit the chances of a big miss when the actual CPI print is published. Barring any big surprise in prices, we anticipate that the Fed will deliver on market expectations of a 50bps hike (a downshift from 75bps in prior meetings), which has been well telegraphed at this point.

Where there’s room for possible disappointment is in the Fed’s signaling of its policy stance, particularly as this meeting will be accompanied by a fresh dot plot of board members’ projections. The Wall Street Journal reported (December 6) that some board members are considering a terminal rate above the 5% that the Fed Funds futures curve implies at the end of 1H23 (i.e. an additional 110bps of hikes over the next four meetings). This is primarily due to some policy makers’ concerns over wage growth and tight labor markets. Indeed, after nearing equilibrium levels in mid-October, US financial conditions have eased sharply through the end of November.

US financial conditions have eased since mid-October

Meanwhile, implied volatility levels in BTC and ETH options have normalized over the last four weeks with the 1m ATM vol for bitcoin sitting at 49%, below the six-month average of 68% but in-line with the level observed in early November. Similarly, ETH 1m vol registered 67% on December 8 compared to a 91% six-month average. These figures seem rather low considering the current macro environment, even if traditional risk assets appear biased towards a year-end rally. According to Deribit, the max pain levels for the month-end BTC and ETH contracts respectively are US$19,000 and $1,400, which are both above current spot levels.

Next week (December 13) is also when the US House Financial Services Committee (HFSC) will have its hearing (“Investigating the Collapse of FTX, Part I”) to investigate the events surrounding the collapse of FTX. It will focus on the individuals and companies involved in the events that led the exchange to file for bankruptcy. In a tweet on December 2, HFSC chair Maxine Waters directly requested the attendance of former FTX CEO Sam Bankman-Fried (SBF), although his response did not instill confidence that he would willingly participate. Subsequently, on December 8, Maxine Waters tweeted that the committee could subpoena SBF if he didn’t attend the hearing, refuting an earlier CNBC report that they would not do so. While it remains difficult to handicap the ultimate outcome of this hearing and future investigations, December 13 will mark the beginning of a likely lengthy process of determining resolutions for FTX creditors and depositors.

On Monday (December 5), the bitcoin network experienced its largest downward difficulty adjustment since July 2021 (which at the time coincided with China’s mining ban) of 7.3%. Challenging conditions (such as higher input costs and lower output value), combined with elevated energy prices, have resulted in a highly stressed economic environment for bitcoin miners for the past several quarters. We’ve observed a number of signals of stress across the industry including Compute North filing for bankruptcy in September, Core Scientific indicating they were potentially heading towards bankruptcy and halting all debt financing payments in October and Iris Energy being forced to unplug a meaningful portion of their mining fleet after defaulting on a loan against their hardware in November.

While this week’s downward difficulty adjustment is a clear indication of miners being forced to capitulate and unplug their hardware, whether hashrate will continue to decline and result in subsequent downward difficulty adjustments remains to be seen. Outside of the US, it’s been reported in recent weeks that Russia has been aggressively building out mining capacity to leverage stranded and cheap energy in the region. Additionally, mining in China has recovered despite the 2021 ban, and while many operators in the region may have access to cheap energy sources, there also may be operators willing to mine unprofitably in order to escape the country’s capital controls. These potential sources of incremental hashrate may counteract the impact of distressed miners in the US shutting down.

With the holiday season in swing, exchange volumes continue to be lower than average and declining. The asset mix has remained stable. ETH and BTC continue to dominate trading with no altcoin standouts.

A number of client segments on the CES desk have begun to get active on the buyside. Traditional hedge funds, crypto native hedge funds and traditional VCs were all net buyers of late. Smart Contract Platforms, Decentralized Exchanges and Liquid Staking were the favored sectors. Perp funding rates and basis continue to move toward neutral suggesting short positions are being closed out as the market refuses to break lower. Funds are being cautious ahead of what is likely to be a volatile week. 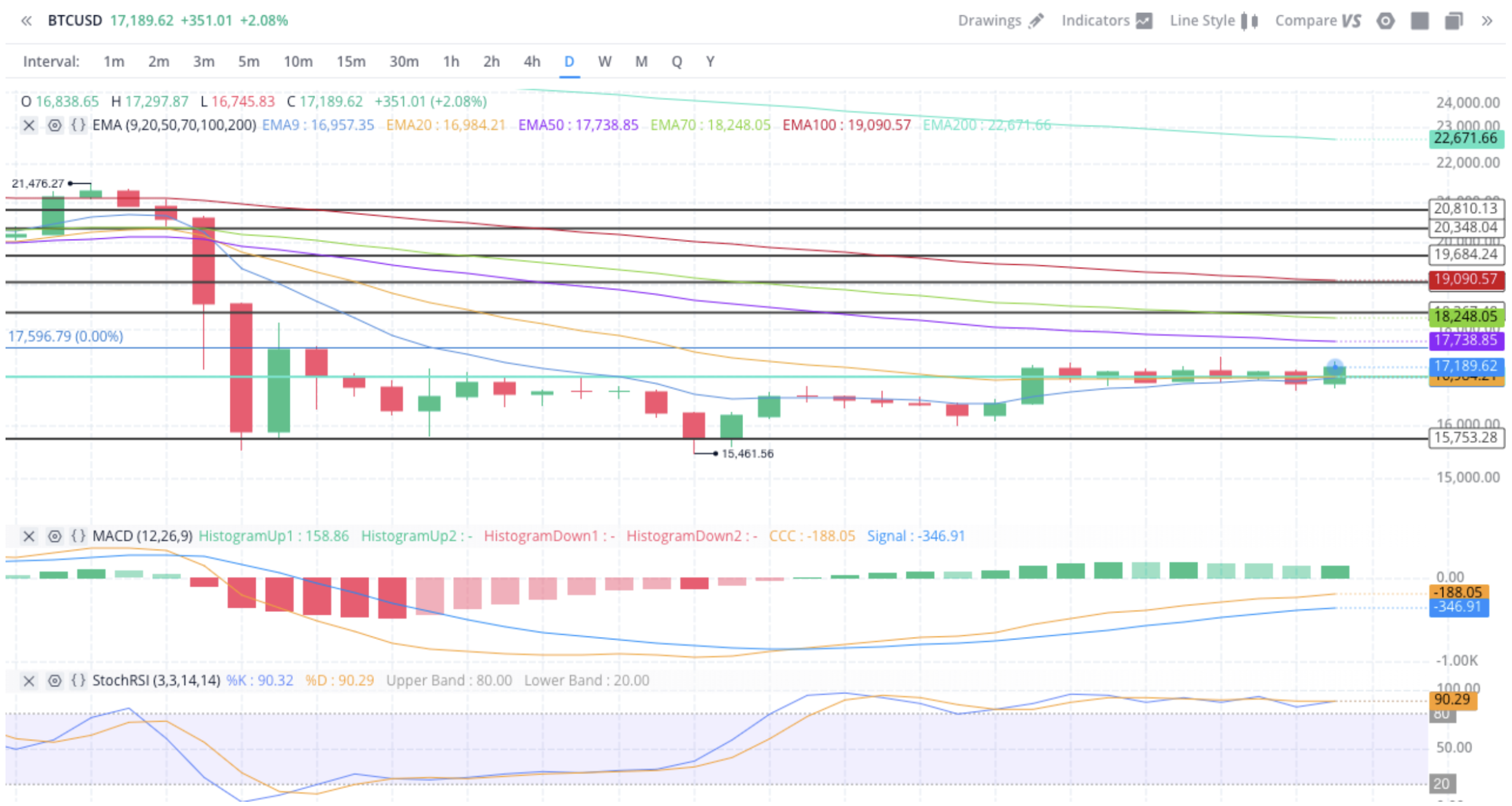 The BTC technical chart continues to be range bound and is still in a very bearish setup. After nine consecutive closes above the EMA20, BTC/USD has struggled to break through its resistance of ($17,412). Without a meaningful break of that level, it is unlikely BTC will approach the EMA50 ($17,739) which would invalidate the short to medium term bearish setup. Given the StochRSI is overbought on the daily timeframe and the EMA200 rejected the 4 hour timeframe on two consecutive candles, BTC will likely cross reject the EMA9 / EMA20 in the coming days before heading lower. Current support levels are $16,441 and $16,184.

A Chinese court in Hangzhou has said non-fungible token (NFT) collections are online virtual property that should be protected under Chinese law as they “have the object characteristics of property rights such as value, scarcity, controllability and tradability” and “belong to network virtual property” that “should be protected by the laws of our country”, according to the original article posted by the Hangzhou Internet Court. (Cointelegraph)

In light of the recent FTX collapse and liquidity scandal, regulators in the European Union have joined other global lawmakers in a push for more clear guidelines and regulations on cryptocurrencies. (Cointelegraph)