Polygon has seen heightened network adoption through both corporate partnerships and increased developer activity. We dive into what Polygon is, its tokenomics and its potential challenges. 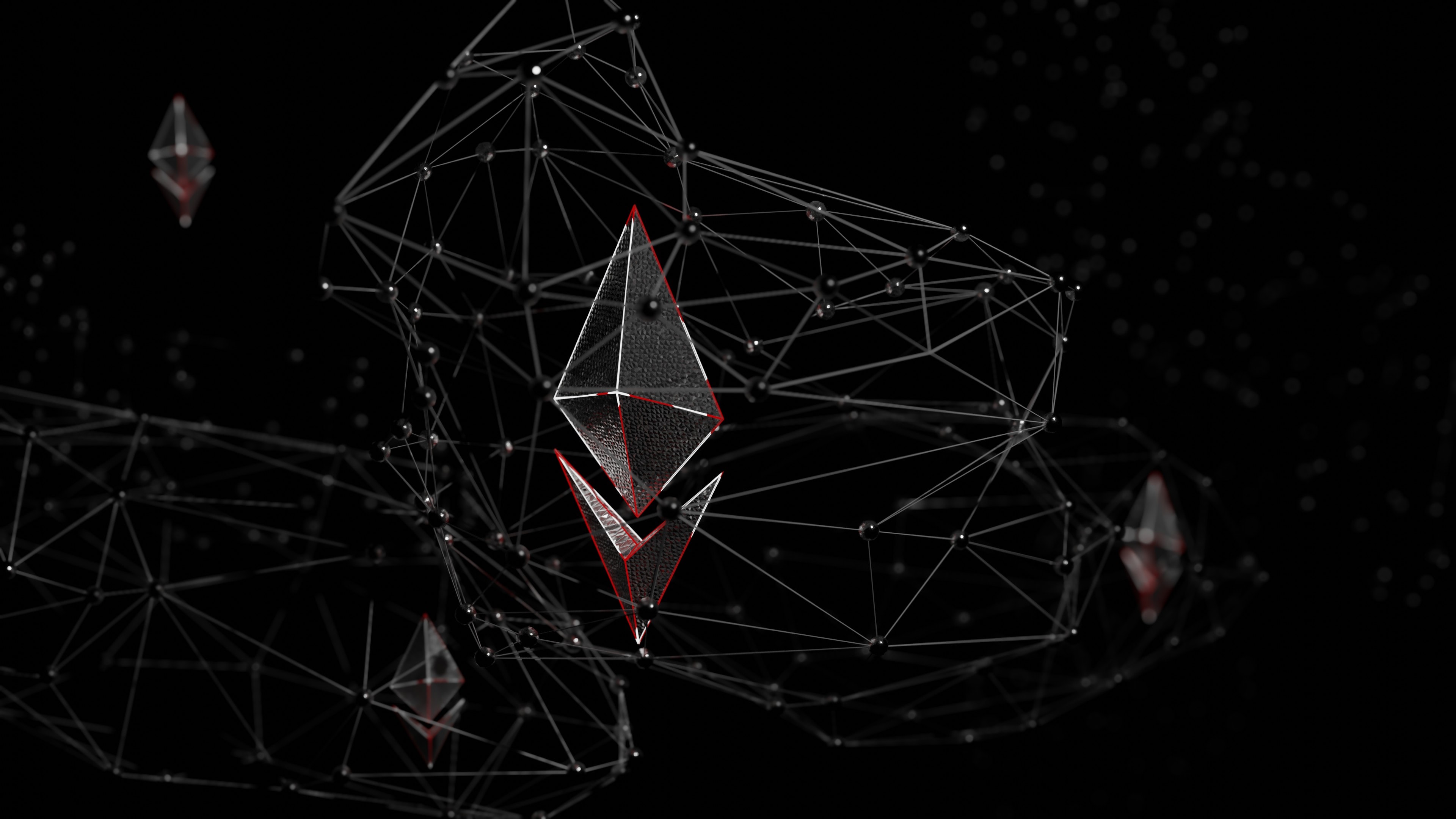 The continued development of various blockchain scaling solutions will be a critical driver of the growth trajectory and ultimate throughput potential of smart contract platforms. Since its founding in 2017, Polygon (formerly Matic) has focused its efforts on supporting the development of scaling infrastructure specific to the Ethereum network and other EVM-compatible blockchains. After rebranding in early 2021, Polygon has broadened the scope of its offering to include a variety of scaling solutions, several of which are still in development. For example, Polygon recently announced a zkEVM testnet launch which pushes zero-knowledge (zk) proof technology further by allowing Ethereum-native developer tools and smart contracts to be used on Polygon’s network.

This strategic shift has also coincided with meaningful traction in terms of network adoption through both corporate partnerships and increased developer activity on the protocol. Nevertheless, outstanding risks remain including substantiated concerns around the centralization of the network and the threat of strategy dilution.

While Polygon’s network provides a suite of enterprise-grade scaling options for developers, its (Matic) PoS chain has historically been its flagship product. Notably, the PoS chain has transitioned from a side-chain (in which consensus is fully independent of the main blockchain) to a commit-chain that lives on the Ethereum mainnet. As a commit-chain, Polygon’s validators stake MATIC on Ethereum (via smart contracts) and run full nodes, benefiting from Ethereum’s network security. Because these mechanisms rely on Ethereum smart contracts, these contracts can supersede Polygon’s own network if there’s an attack. Users can also carry out transactions and engage with smart contracts through the PoS network using Ethereum-based assets.

Ultimately, we would consider Polygon to be an infrastructure play on layer 2 scaling solutions, building the transaction layer of web3 -- assuming a scenario where users in the future largely interact with L2s utilizing Ethereum exclusively as a global settlement layer. For example, Polygon provides a scaling framework in Polygon Edge so developers can take advantage of a variety of customizable modules which allow for the design and implementation of dedicated blockchains that are EVM compatible, as well as the speedy deployment of smart contracts on the PoS chain. The Polygon Edge framework may also eventually offer developers a diverse suite of zkrollup solutions, but these remain under development.

Polygon’s token MATIC is primarily used to (1) pay the gas fees on all transactions on the network as well as (2) stake validator nodes to earn rewards. MATIC’s entire (maximum) supply of 10B tokens were issued at inception in April 2019, of which only about 8B are in circulation right now. The remaining ~2B tokens will be unlocked periodically over the next 3-4 years, mainly to be paid out through staking rewards. Starting in 2H21, scheduled unlocks have only affected two major groups of MATIC holders: the project team (the founders etc) and Polygon’s foundation – both of whom are unlikely to immediately sell their interest, in our view. Indeed, there have been stories about tokens allocated to the team, foundation or advisors being voluntarily channeled to staking activities to support the network. 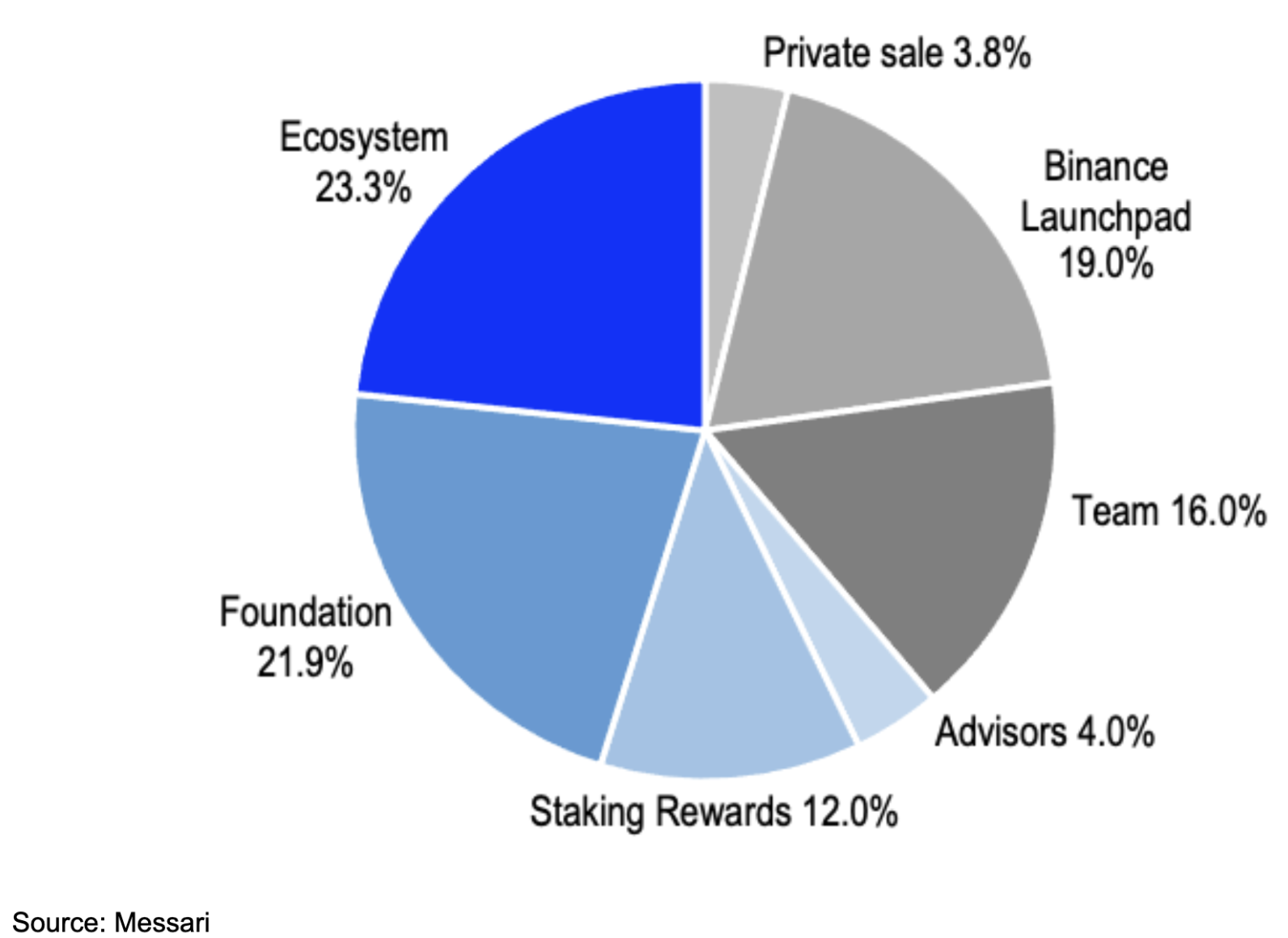 We think this explains why MATIC’s price performance has not been negatively affected by the dilution of its circulating supply in the last few rounds of token unlocks. The last major token release happened in late April 2022, unlocking a combined 593M MATIC tokens to the two groups mentioned above, and the next and last will occur in October with the foundation gaining access to 273M tokens at that time. After that, additional MATIC tokens will enter circulation only through the payout of staking rewards until all tokens have been released in April 2025, according to Polygon. 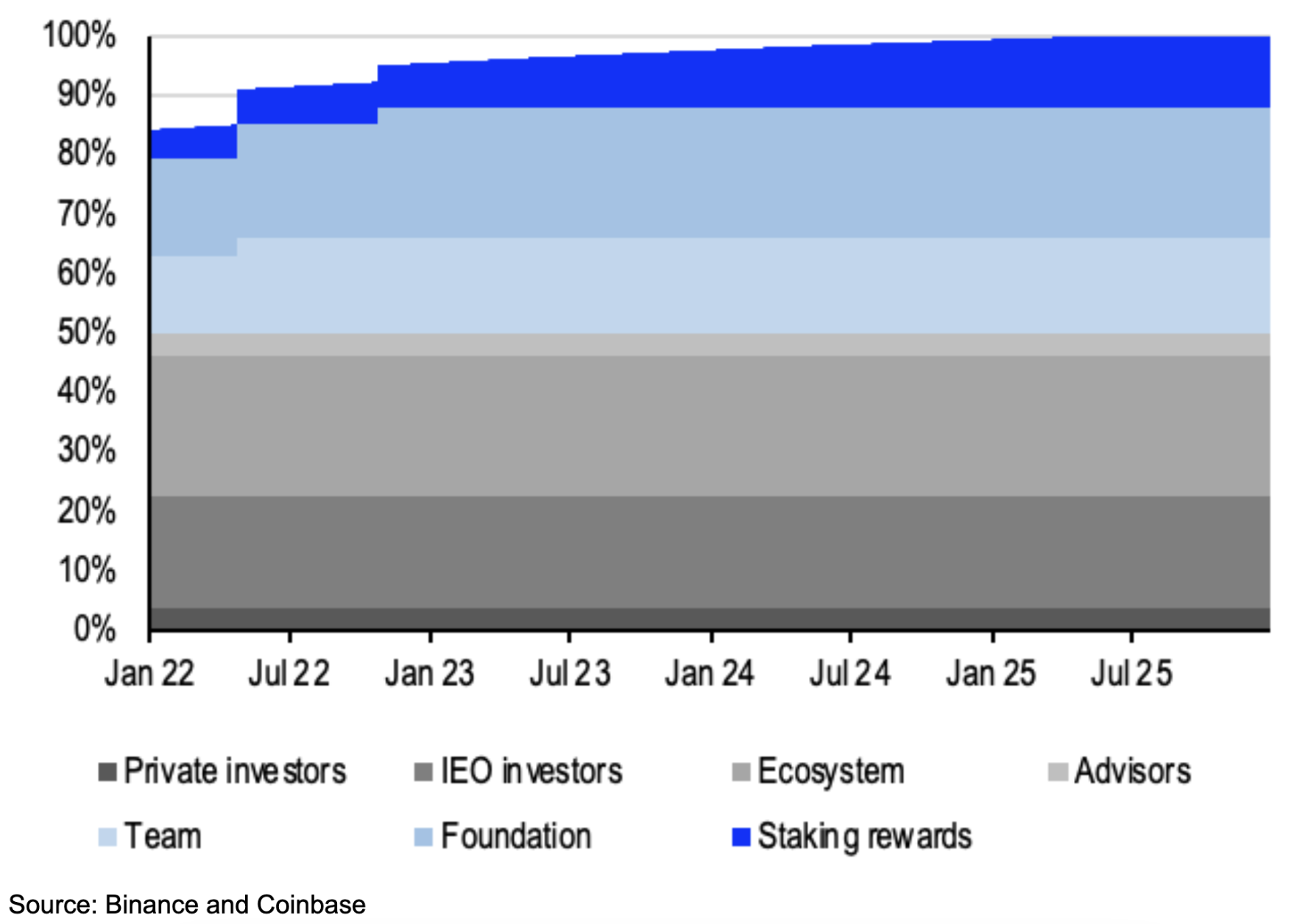 Still, MATIC’s total circulating supply (i.e. not just its liquid supply) has increased by ~25% in the last 12 months, though this includes staked and delegated tokens which represent about a third of this amount or 2.55B MATIC. (Note that Polygon reports a figure closer to 39%). We estimate that staking pays out rewards of 7.3% annualized ex-post, though Polygon projects an annual reward of 9.8% in its calculator subject to an average unbonding period of around two days. Total staking rewards are fixed so as more MATIC are staked or delegated, the rewards per capita decline (i.e. rewards can change based on the amount of MATIC tokens staked on the network as well as the staking duration.) Also note that the network initiated a protocol update in January 2022 to burn a portion of its transaction fees, so far representing 2.8M tokens or 0.04% of the total MATIC circulating supply (as of July 19). 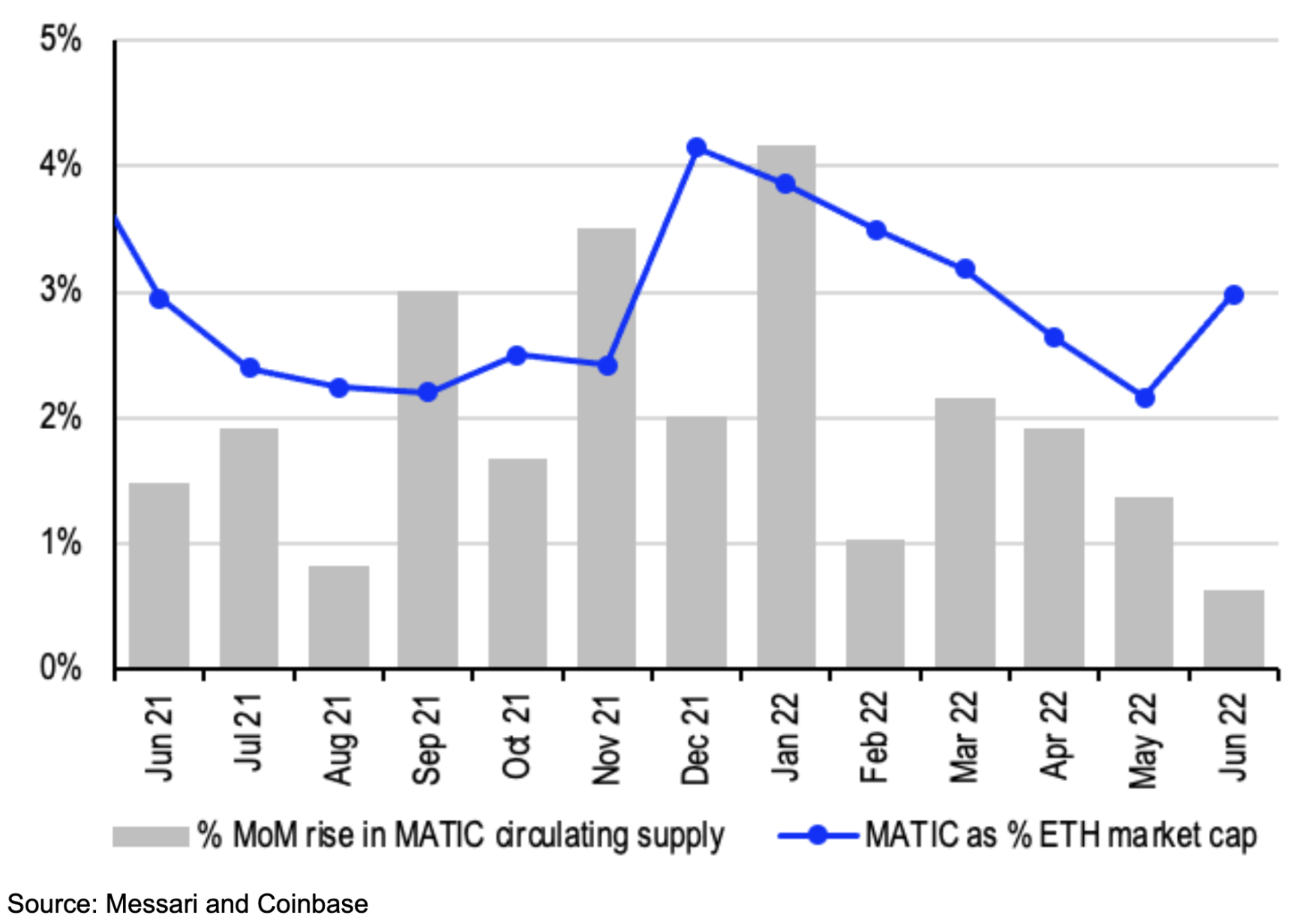 One area where Polygon has particularly excelled since its rebrand in early 2021 is corporate development and partnerships, which has coincided with strong growth in developer activity across the network. Total value locked (TVL) across dApps on the network has grown from under US$1M at the beginning of 2021 to over $1.7B as of July 2022 (across ~19K dApps, with the top 10 accounting for ~82% of the TVL).

In part driven by the network’s usefulness in the context of relatively expensive gas prices on Ethereum during the NFT boom of 2021, Polygon became the preeminent low-cost alternative for both launching and collecting NFTs (during a recent peak in volume in January 2022, NFT transactions accounted for over ~60% of total transaction volume across the network). Polygon’s strategic emphasis on corporate development has led to several big-name partnerships (many of which are detailed in the table below), which have served as an indirect form of marketing for the network. 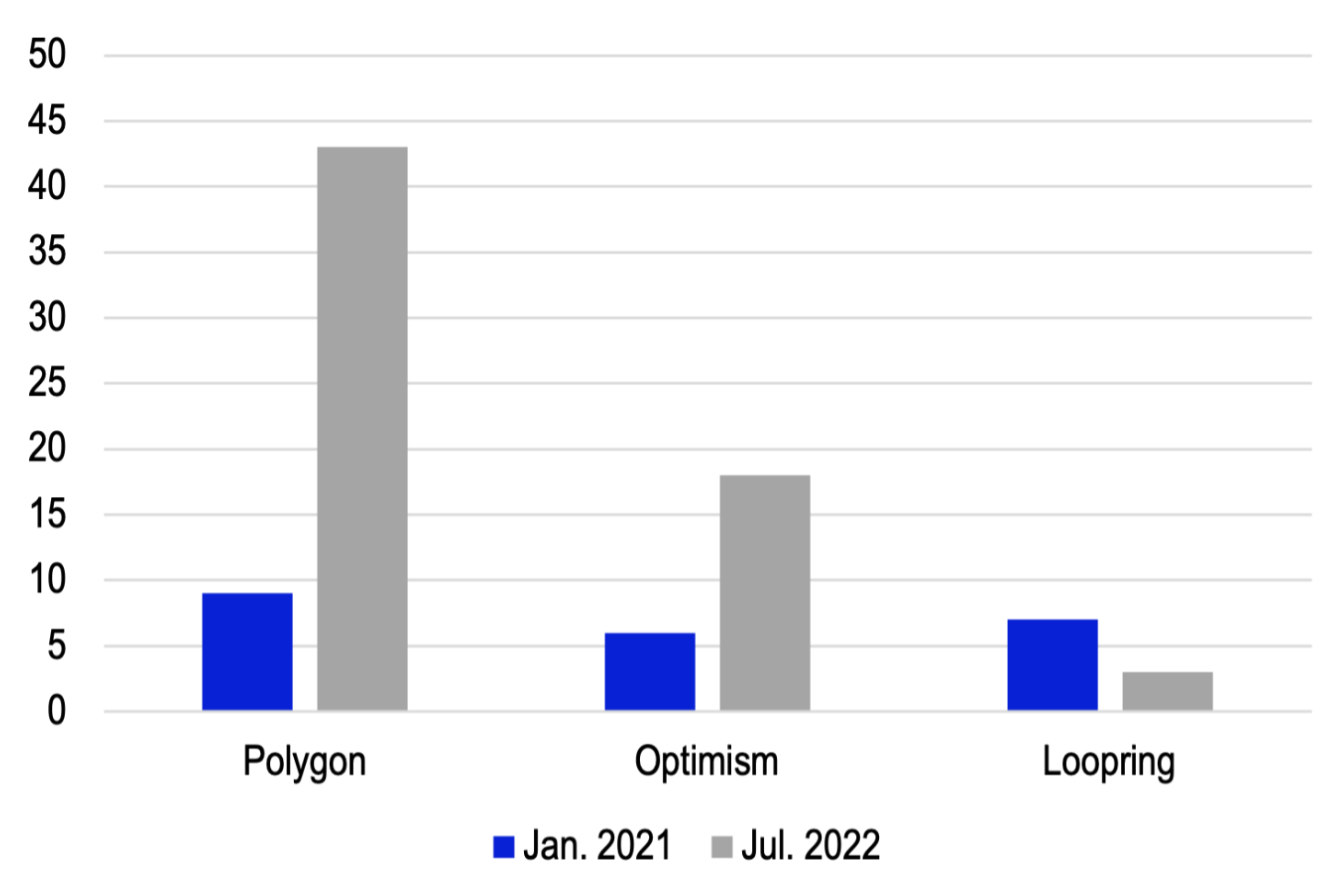 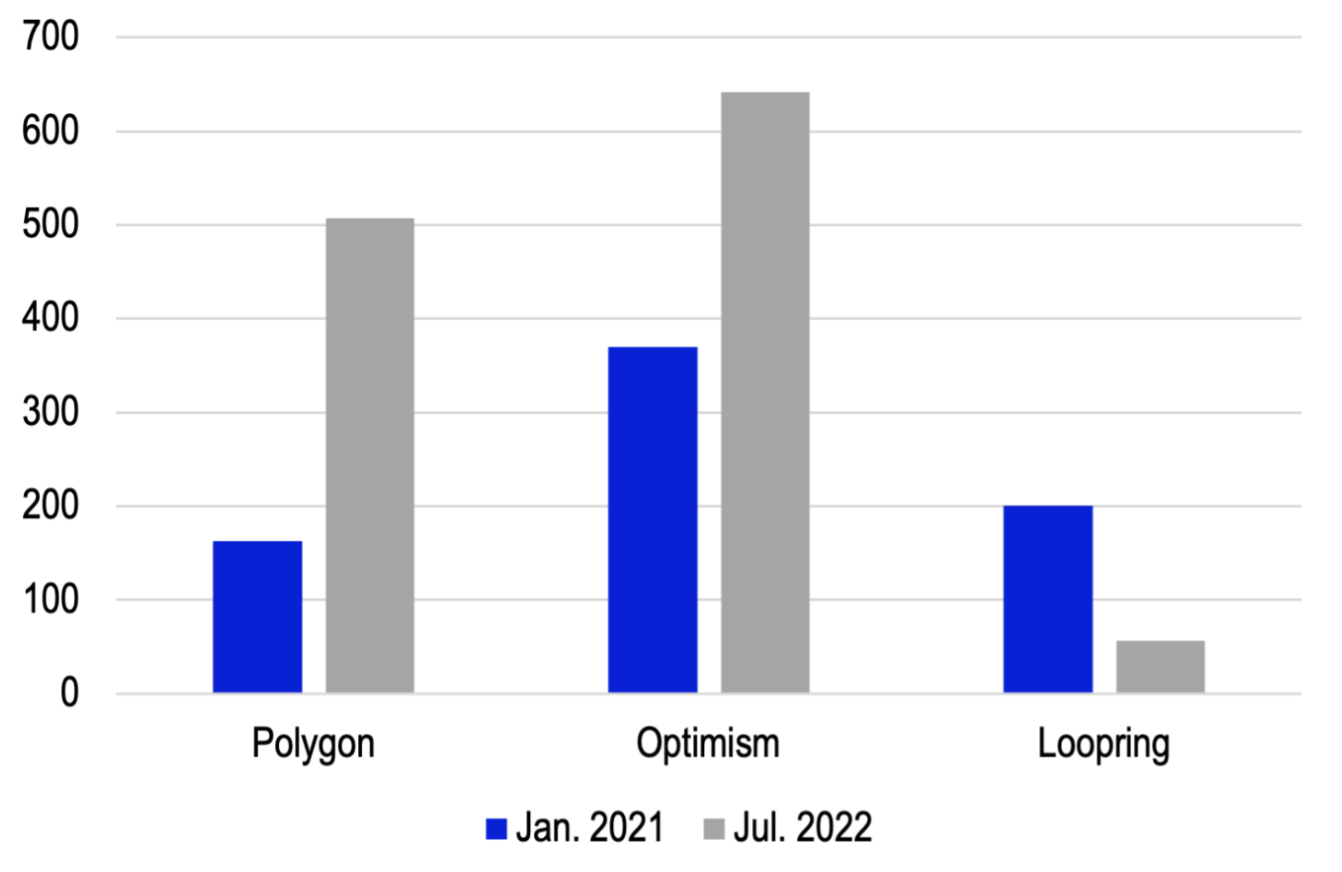 * Measure of a project’s development activity over time (weekly intervals) based on a number of pure development-related ‘events’ in the project’s public Github repository (source: Santiment)

Despite strong growth in developer activity and price appreciation relative to Ethereum over the last 18 months, the Polygon network and its native token MATIC are not without their own set of challenges. At the highest level, the strategic aim of the protocol inherently marries its ultimate success with that of Ethereum. Accordingly, as the network strives to onboard more and more transaction volume going forward, they are competing not only against other L2 scaling solutions, but also indirectly against all alternative L1s in development. Given this rather robust competitive landscape, one risk to Polygon’s diversified approach of becoming an all-encompassing scaling solution provider is that it could become dillutive to its potential, particularly relative to more specialized scaling solutions.

Another area of potential concern is with regard to the apparent centralization of the Polygon network, both in terms of (1) token and validator distribution, as well as (2) the private keys of the multisig structure capable of protocol changes.

Polygon’s development team has also been scrutinized for the structure of their private key multisig with oversight over protocol changes. In May 2021, DefiWatch wrote a letter to the developers alleging that protocol changes could be made via a simple 5-person majority of an 8-key multisig structure, of which four keys are alleged to be held by Polygon’s founders. In response, the Polygon team confirmed that they do in fact use 5-of-8 multisig structures and that only 4 of the keys are held by non-founders.

The team argued that this type of multisig structure is commonplace and even necessary during the early development of a protocol, but also noted that they intended to transition towards more optimal structures in the future as the smart contracts secured by the multisigs became more “battle-tested.” The criticisms resurfaced in December 2021 when these multisig holders enacted a hardfork of the protocol to patch an apparent vulnerability. Importantly, this action was taken with minimal, if any, coordination from the broader community and perhaps codified fears of private key centralization. Mihailo Bjelic, one of Polygon’s co-founders, eventually addressed the situation in February 2022 and reconfirmed the existence of the 5-of-8 multisig structure, but downplayed its significance and reiterated the team’s longer-term goal of transitioning away from multisig structures towards governance-controlled proxies.

Since its initial founding in 2017, the Polygon network has consistently adapted and expanded its roadmap to include any/all solutions deemed necessary to foster a more interoperable and customizable infrastructure for scaling the Ethereum network. While the protocol as it exists today isn’t necessarily a market leader in terms of any one particular blockchain scaling solution, particularly those that are still under development, Polygon has been remarkably successful in the areas of business development and marketing. A focus on corporate partnerships, particularly in the realm of NFTs, has allowed Polygon to become one of the more well-known blockchain protocols in the space. That said, we would also pay attention to some of the risks including substantiated concerns around the centralization of the network and the threat of strategy dilution.