Between the competing narratives of weaker global growth and higher inflation, it seems like economic activity has now become the bigger concern among market participants. 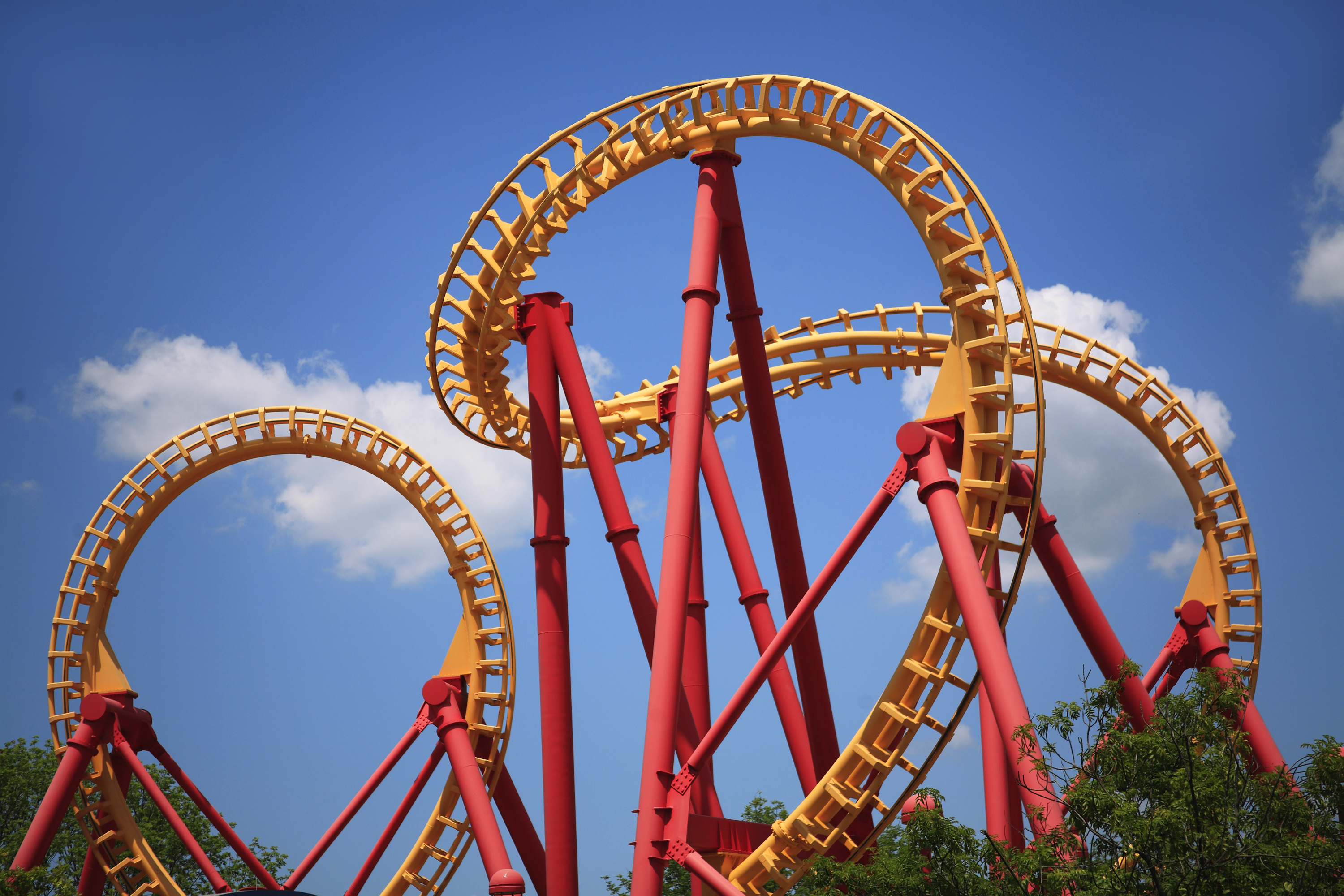 Even though real interest rates are still negative, slowing growth together with hawkish central banks and the tightening of global liquidity make for a challenging macro environment that acts as a drag on crypto.

Between the competing narratives of weaker global growth and higher inflation, it seems like economic activity has now become the bigger concern among market participants. The prospects of a U.S. economic reopening offers little relative comfort compared to the demand destruction prompted by geopolitical tensions in Europe and lockdowns in China. On April 19, the IMF lowered its global growth forecast by 0.8pp to 3.6% YoY while raising its inflation forecast by 1.8pp to 5.7% for advanced economies (and 8.7% for emerging market economies.)

Even though real interest rates are still negative, which should be supportive for risk assets, slowing growth together with hawkish central banks and the tightening of global liquidity make for a challenging macro environment that acts as a drag on crypto.

Meanwhile, we have seen the carry over of many important crypto-specific themes from last year but very little in the way of new “top down” narratives, which are crucial to the “hype cycles” in this space. For example in 2H21, we saw the rise of alternative layer-1s, the expansion of NFT markets, the early stages of the web 3.0 buildout and the approval of bitcoin futures ETFs in the U.S.

Recent launches of new platform-specific algorithmic stablecoins or the innovations in the Moonbirds NFT minting seem to be an extension of these developments from a “bottoms up” perspective. Moreover, according to The Block, venture funding in crypto received US$12.5B in 1Q22, up 20% QoQ from $10.4B in 4Q21 as more institutional money continues to flow into digital assets.

On the other hand, we have started to see signs of a slowdown in investments akin to the move in traditional markets, and we may not see any major new crypto narratives until 2H22. Some of the important stories we’re looking forward to include:

From the flows side, we are also watching progress on the Mt.Gox settlement to see when bitcoin payments totaling ~$7-8B could potentially arrive in the market, which could be as early as 2H22 or delayed until 2023. This could potentially be offset by purchases of bitcoin (or other tokens) to shore up stablecoin reserves, comparable to the Luna Foundation Guard (LFG) flows we saw in March and early April. On April 21, Tron announced that it is targeting reserves of $10B for the USDD algorithmic stablecoin it plans to launch on May 5, which we think could prompt similar buying in the future. As more alt L1s follow in Terra’s footsteps, this is a developing narrative that could provide a new avenue of technical support for the crypto market.

Additionally, the conversation surrounding crypto adoption could also heat up in earnest in 2H22, precipitated by the nature of high and sticky inflation worldwide, the growing risks of balance of payment crises and the broader theme of de-dollarization. Indeed, with countries mostly focused on dismantling the fiscal stimulus put in place during the peak of the pandemic, it looks very difficult in our view for lawmakers to approve any new spending if the global economy slows down in earnest. We think that could draw more attention to the benefits of some crypto as a store of value.

We are already starting to see more countries opening up to greater crypto use, such as the UK’s plans to be a hub for crypto technology or the Central African Republic becoming the second country after El Salvador to accept bitcoin as legal tender. Still, we are mostly dealing with themes that are longer term in nature.

In the interim, we are also likely to see increasing competition among the protocols and decentralized applications (dapps) that have surfaced in the last two years and would expect to see new developments that will continue to capture market attention in this space. Conceptually however, there seems to be more technological innovations from a “bottoms up” perspective rather than thematic innovations from the “top down” like the metaverse or play-to-earn gaming.

In our view, all of this means that idiosyncratic drivers for the asset class may be eclipsed by broader macro related factors through 2Q22.

That means that the stabilization of risk appetite is contingent on whether markets have priced in enough downside to accommodate the withdrawal of global central bank liquidity together with how the Fed ultimately sizes up concerns over market dysfunction versus moral hazard. Over the last 40 days, the correlation between BTC (ETH) returns and stock returns has risen to 80-90% due to market stress (see correlation matrix in table 1).

Correspondingly, the correlation of crypto and the copper/gold ratio has risen to ~60%. We think this ratio works better than looking at the individual relationships between bitcoin and either copper or gold taken separately. For example, copper has been a better inflation hedge relative to gold since late February up until early April.

But gold has since started to outperform copper amid concerns over lockdowns in China due to COVID-19 and/or Russia blocking energy exports to EU countries, both of which may be putting the global recovery at risk. (Note that China’s Politburo has recently made commitments of economic support.) As a result, we think the indicator points towards the higher likelihood of a global stagflation scenario, under which bitcoin would not perform well as it tends to function more as a risk-on asset.

Meanwhile, the U.S. dollar has been strengthening against almost every major currency year-to-date, even historical safe havens like the JPY, although that is due in part to the Bank of Japan’s yield curve control policy. As an important denominator for bitcoin and ether (i.e. BTC/USD and ETH/USD), multilateral U.S. dollar strength also tends to be inversely correlated with crypto performance. BTC and ETH both underperformed several major G10 currencies like the euro (EUR), sterling (GBP) and yen (JPY) at the start of the year, with sharp drawdowns on the order of 2-3 standard deviations in January, relative to the preceding 40-day average (see chart 1.) 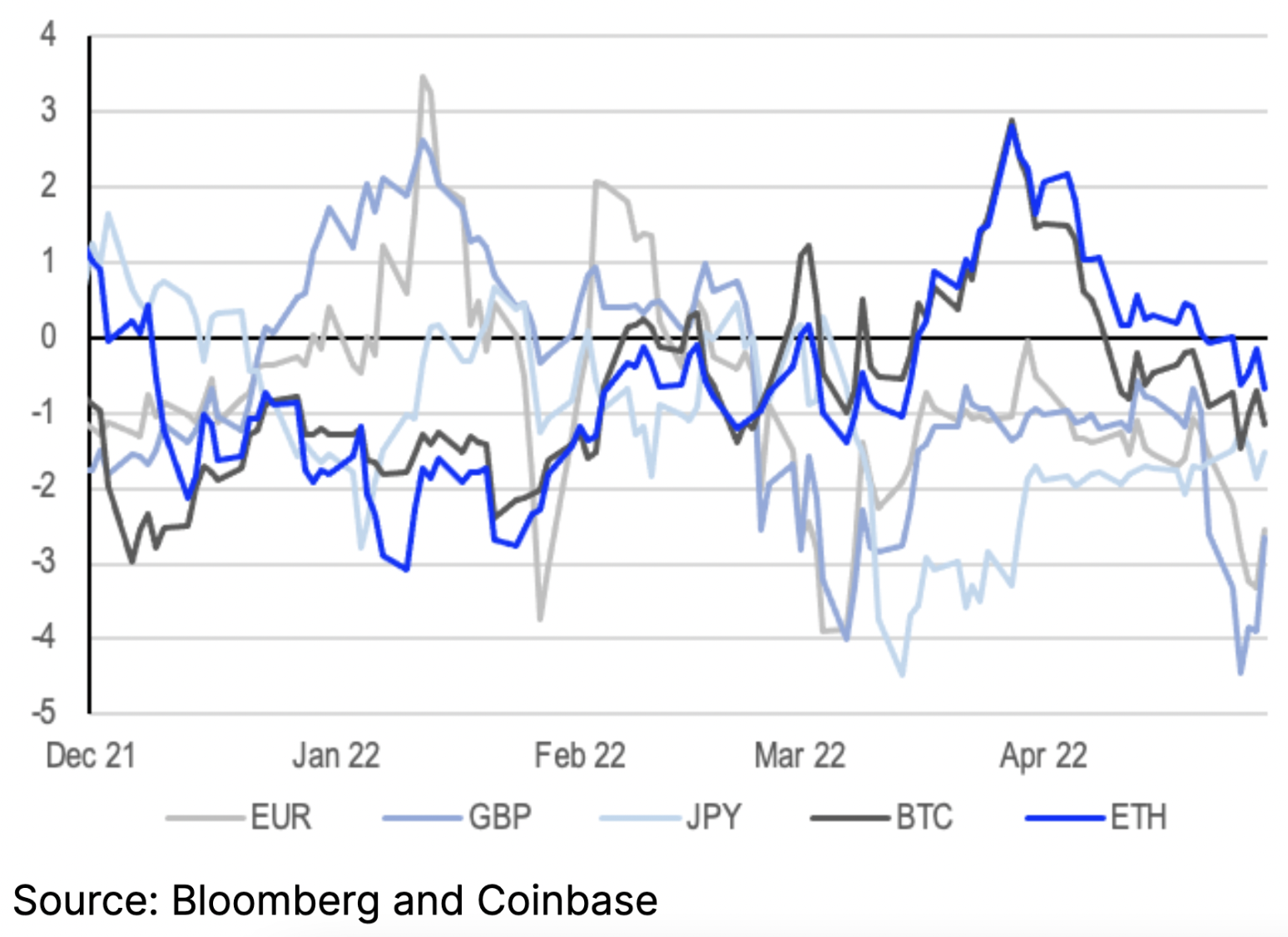 However, after levels converged in February following the Russian invasion of Ukraine, drawdowns in BTC and ETH have actually been much more shallow than its fiat counterparts, supporting relative value arguments for crypto. For example, while the magnitude of the depreciations in EUR and GBP have amounted to ~3-4 standard deviations (and ~2 standard deviations for the JPY) relative to the 40-day moving average, the sell off in BTC and ETH has amounted to less than 1 standard deviation. In our view, that suggests currencies based on a centralized counterparty may not necessarily be more resilient than a decentralized one.

Technicals also look healthy for crypto, as we are seeing more bitcoin being removed from exchanges. This can be supportive for the asset class as it could mean more coins being taken out of circulating supply to be locked up in cold storage wallets. In particular, we saw 122k bitcoins moved from liquid to illiquid wallets in March, accelerating the move we saw in the preceding four months which averaged 26k (see chart 2.) We suspect the move in March reflects the buying by both LFG for its reserves as well as accumulation by MacroStrategy, i.e. MicroStrategy’s subsidiary.

Also a recent Glassnode report indicated that the “majority of Short-Term Holders [of bitcoin] who purchased … above $50k have already capitulated and redistributed their coins” which in our view suggests a lot of the downside in crypto has already been realized and current inventory is sitting in stronger hands. That is, positioning looks much cleaner at the moment, with bitcoin ownership concentrated among long-term holders, which could be supportive for the asset class if we witness an upside catalyst. 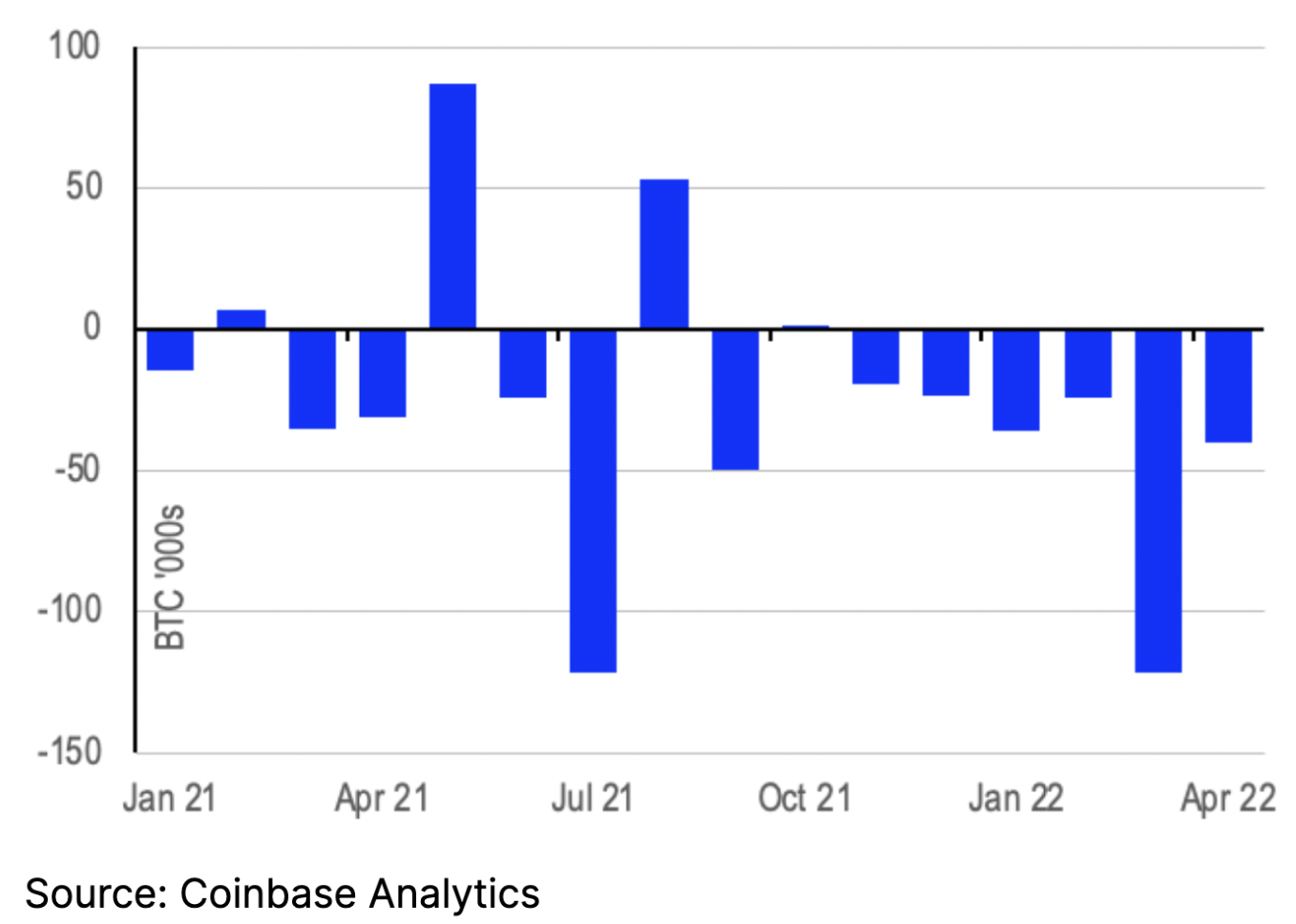 Overall, the plethora of intersecting macroeconomic factors is putting pressure on nearly all risk assets, although we could soon be entering a consolidation phase that would open up more opportunities for crypto in 2H22. At the moment, we have seen significantly more “bottoms up” rather than “top down” technological innovations in the digital assets space this year, including the further development of layer 1 protocols, the build out of more web 3.0 infrastructure, centralized crypto on-ramps, plus greater activity in NFTs, metaverse technologies and developer tooling.

If the cyclical headwinds start to subside, we think the narratives waiting for us in 2H22 could be compelling enough to generate activity here. Ethereum’s transition to a proof-of-stake consensus mechanism and the potential emergence of layer-2 tokens could draw in capital, for example. Meanwhile, more regulatory clarity from the U.S. Treasury Department and the U.S. Federal Reserve on topics ranging from central bank digital currencies to security will be helpful for the industry as a whole.

Table 2. Inputs to our correlation matrix 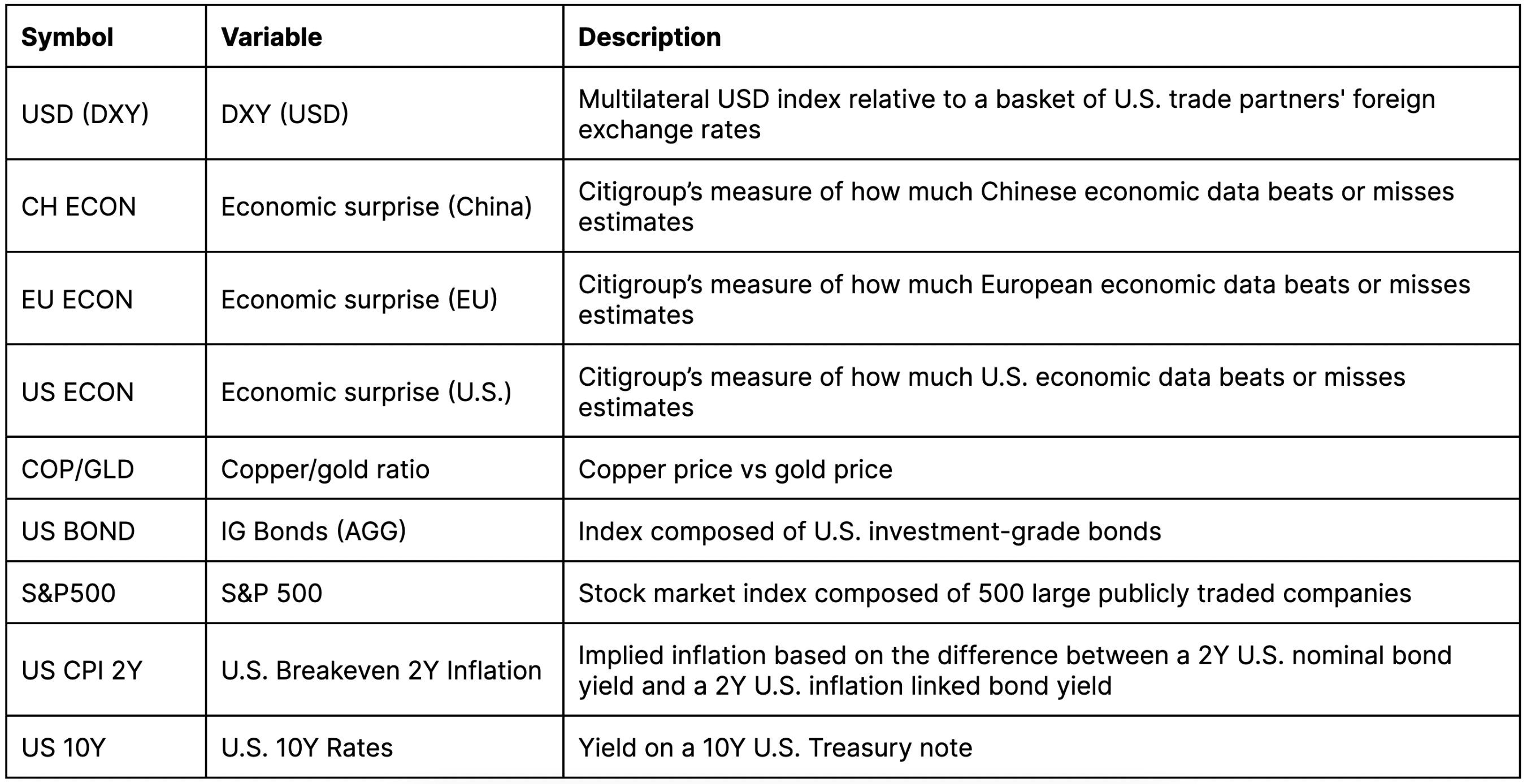