Only in crypto can a platform built by anonymous founders come out of nowhere to challenge an industry leader, all in a matter of weeks.

That’s precisely what happened with the launch of NFT marketplace LooksRare, whose $9B+ in January volume nearly tripled that of OpenSea. On top of that, within 30 days of launch LooksRare produced $307M in protocol revenue, vs OpenSea’s $110M over the same period. 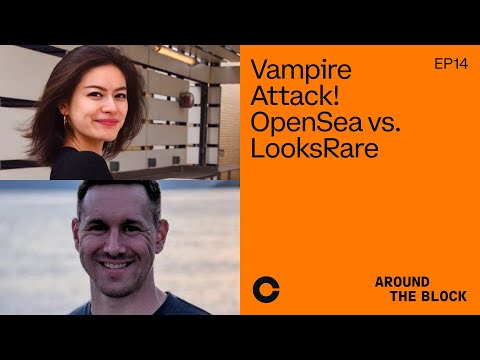 The raw numbers don’t tell the full story, however… 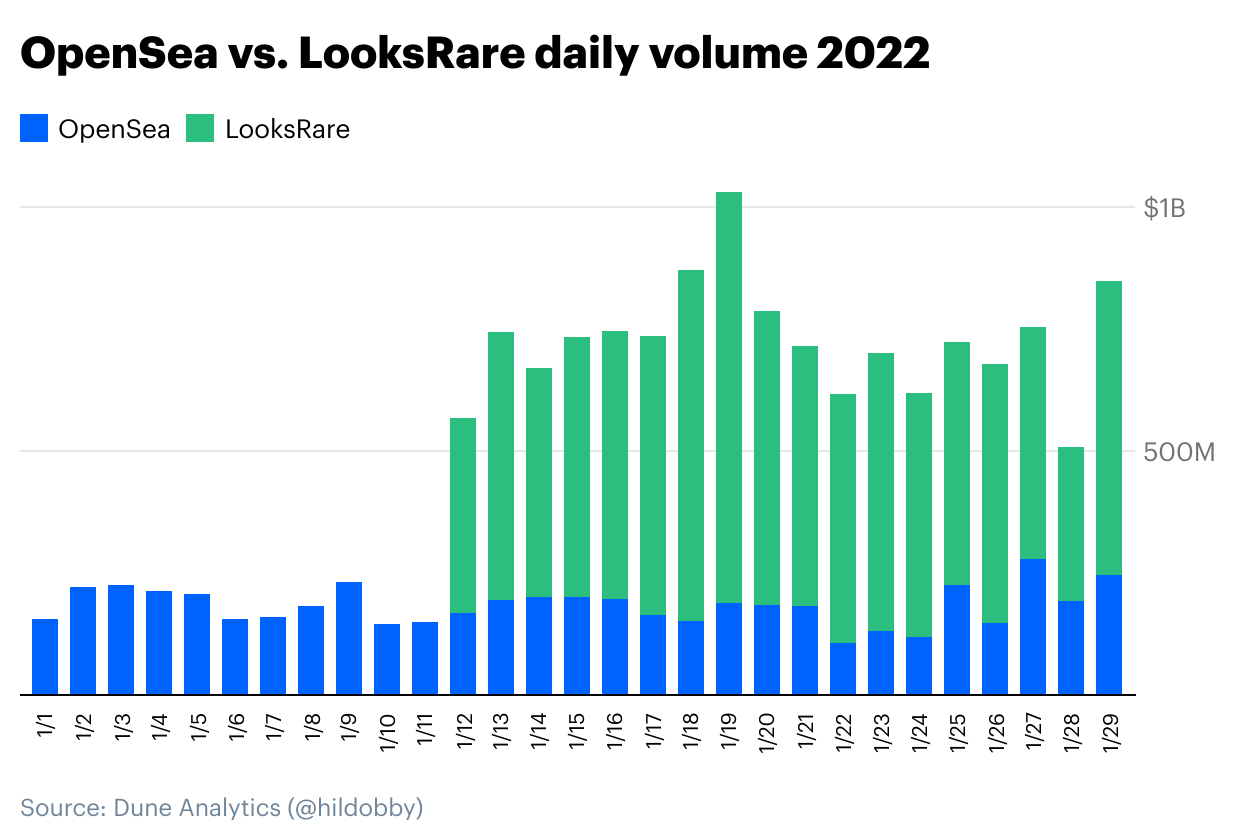 In this edition of Around The Block, we’ll explore the LooksRare vampire attack of industry leading NFT marketplace OpenSea.

Vampire attacks are purely a crypto/Web3 phenomena. At their highest level, a vampire attack refers to a method for sucking users out of an existing platform into a competing one by offering some kind of incentive (typically tokens).

The most notorious vampire attack occurred in 2020, when SushiSwap launched a near identical decentralized exchange to industry leading Uniswap with one key difference: users who migrated their liquidity from Uniswap to Sushiswap were given $SUSHI tokens. $SUSHI offered holders governance rights over the platform in addition to a cut of trading fees collected on SushiSwap.

The result? Uniswap’s liquidity temporarily took a nosedive, as users moved $1.2B in funds over to Sushiswap to cash in on the superior incentives being offered. Uniswap eventually recovered and responded with a token launch of their own, but a new DEX was bootstrapped over a relatively short period of time. 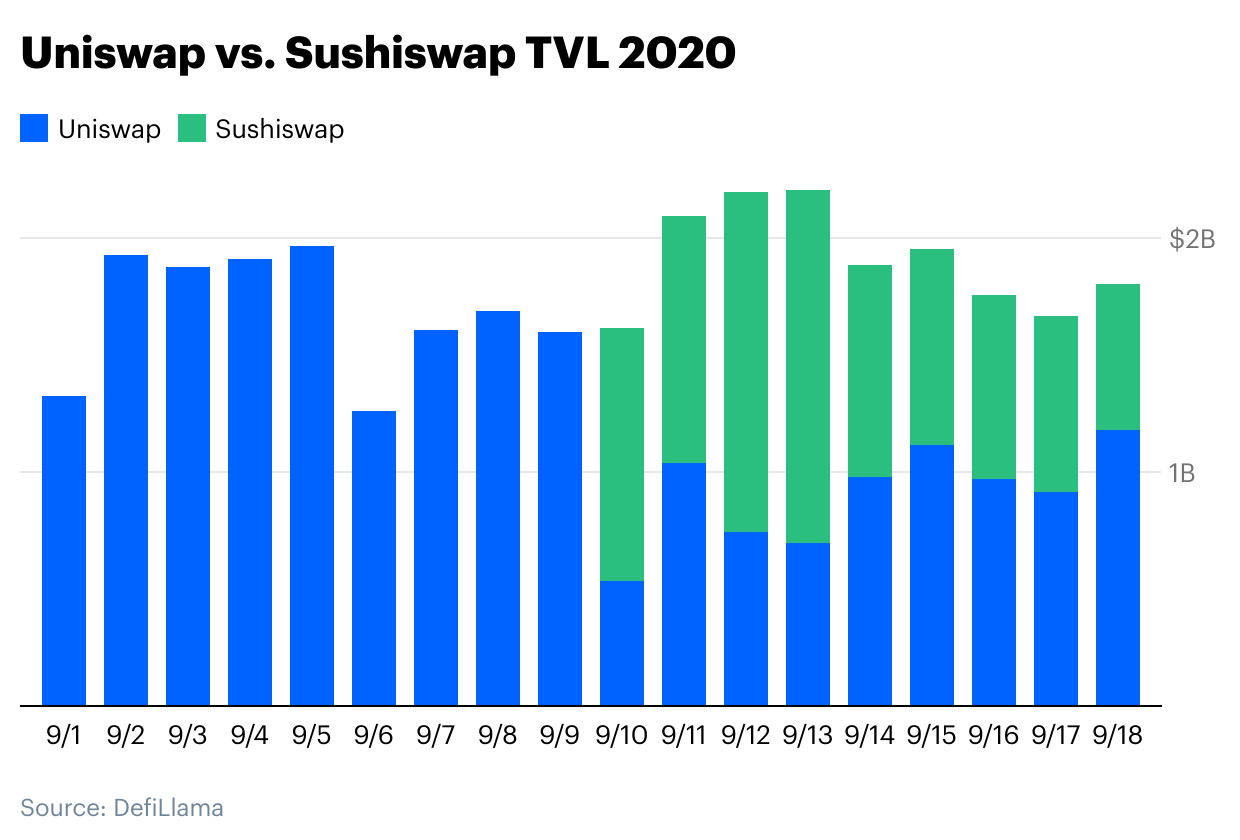 LooksRare followed the typical vampire attack playbook which is as follows:

The main difference between SushiSwap’s attack and LooksRare’s is that SushiSwap was a near identical copy of Uniswap’s code (known as a fork) with token incentives built on top. LooksRare appears to have built their own smart contracts (according to their documents); everything else in the playbook is the same:

A $LOOK at the initial incentives

Due to the open-sourced nature of blockchains, the LooksRare team was able to identify OpenSea users who had traded at least 3 ETH worth of NFTs over the prior six months and airdrop them LOOKS tokens. However to claim these free tokens, users first had to list an NFT on the LooksRare exchange.

Airdropping tokens to an existing community of active NFT traders proved effective, as NFTs flooded onto the new marketplace. The LOOKS token would climb to nearly $7 just 10 days after launch, fetching a $1B marketcap in the process.

And the incentives didn’t stop there…

Beyond the initial airdrop, users of the LooksRare platform could earn more tokens by staking their LOOKS and by trading NFTs on the platform. LooksRare charges a 2% fee for every sale (vs. 2.5% on OpenSea), and staking (locking LOOKS into a smart contract) entitles stakers to 100% of those fees. Stakers also earn additional LOOKS on top of trading fees.

At the time of writing, staking LOOKS earns an eye-popping 500%+ APR.

The trading incentives is where things start to get interesting. It’s pretty simple: buy or sell an NFT on LooksRare and earn LOOKS. Rewards are paid out daily, based on the % of that day’s volume. Currently 2.8M LOOKS, or just under $10M USD at current prices, are being awarded daily.

So far, a free airdrop was enough to get people to the platform, and a $10M daily reward has been enough to keep daily trading volumes outpacing OpenSea. However, when you look the total daily # of users, it’s clear that these volumes aren’t as impressive as they initially appear.

While LooksRare is doubling OpenSea’s volume on any given day, OpenSea has 20–40 times more active users than LooksRare. This suggests that LooksRare’s volume is fueled by a small number of traders gaming the incentive system to earn LOOKS. 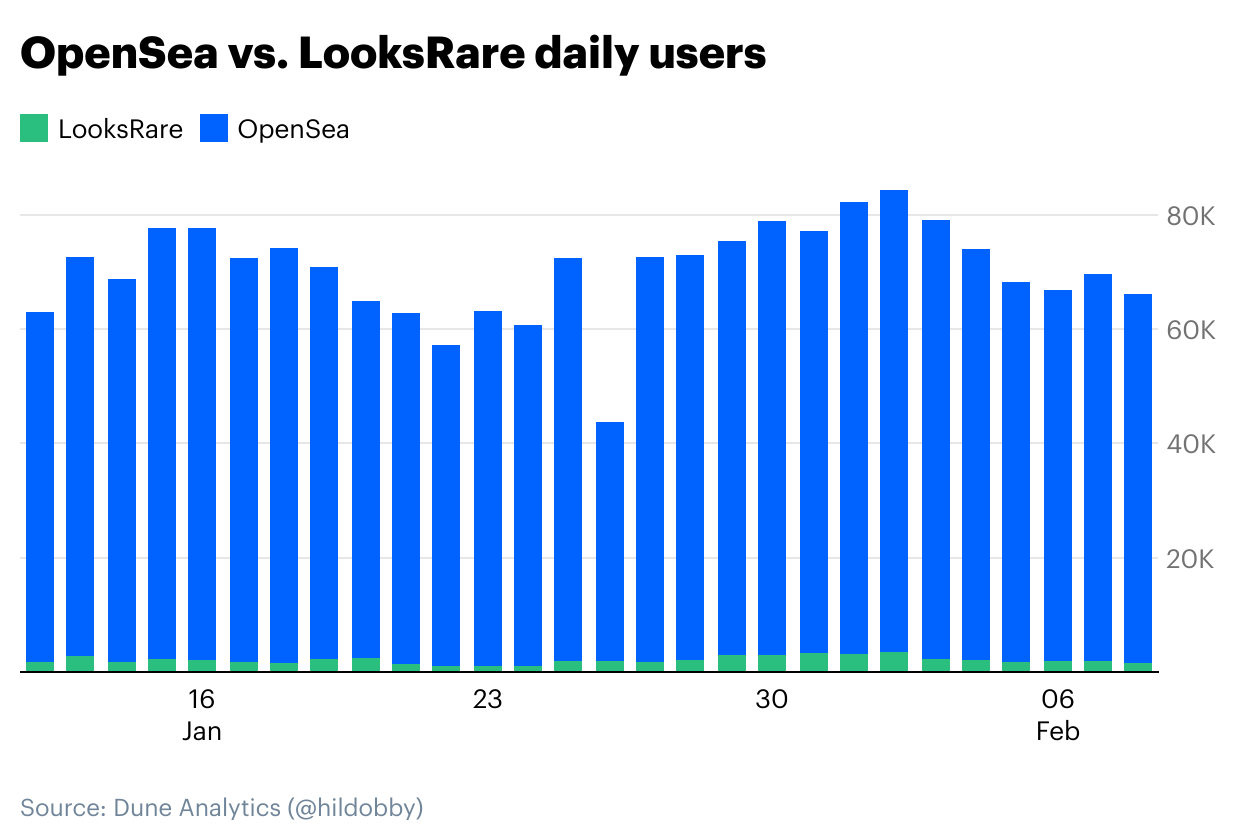 There’s nothing stopping a user from swapping the same NFT back and forth between their own wallets at a high dollar amount. Since daily rewards are paid out as a % of the day’s volume, if, for example, someone can wash trade their way to 10% of that day’s volume, they can net $1 million in LOOKS.

The wrinkle here is that for every trade, users must pay a 2% fee priced in ETH. The math works out such that the fees traders are paying in ETH are roughly equal to the rewards being paid in LOOKS. As such, traders are basically swapping ETH for LOOKS, which will pay off should the price of LOOKS appreciate relative to the price of ETH.

Essentially, there’s an interesting bit of game theory in motion, as early adopters will be rewarded should the LooksRare platform succeed.

At this point, no one would dispute that LooksRare’s staggering volumes are a result of their lucrative incentive scheme. However, that doesn’t necessarily mean that LooksRare is all hat and no cattle.

At the end of January, Crypto Slam estimated that about $8B of the $9B in January volume was washtrading. However, the remaining legitimate NFT volume is still more than what NFT marketplaces Rarible, SuperRare, Foundation, Makersplace, and Aysnc did in all of 2021 combined.

Even with washtrading eliminated, LooksRare’s launch can still be considered a success. Plus they offer other interesting and novel features such as no transaction fees for private sales and the ability to make a single offer across an entire collection of NFTs. Lastly, their “real volume” is continuing to grow. 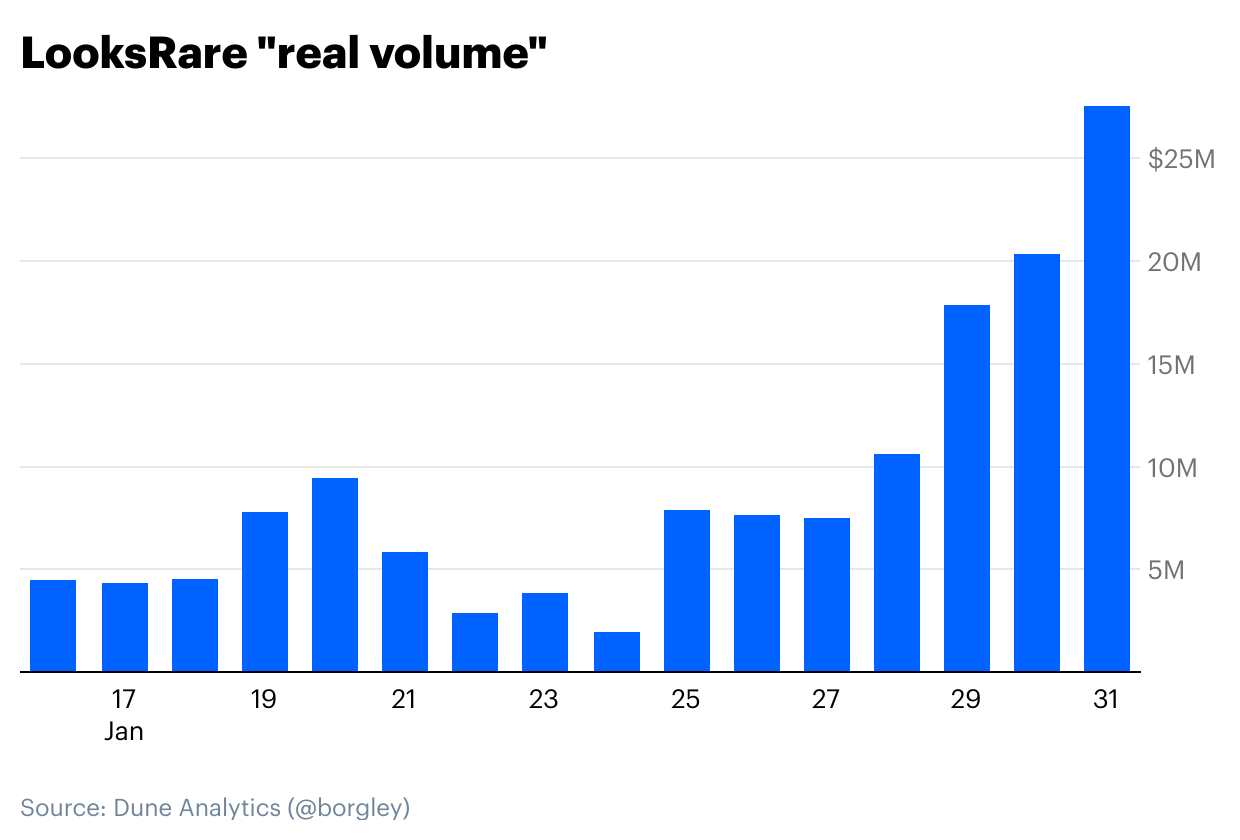 LooksRare’s trading rewards will wind down over the course of the next two years, at which point the marketplace will have to compete on its product and community alone. Whether it can continue to grow its market share without powerful incentives is up to the anonymous team behind it.

We can look to its vampire attacking predecessor, SushiSwap, for a glimpse into what the future may hold. SushiSwap by many measures has remained relevant after its initial rewards dried up. They continued to innovate and deploy across multiple chains, with nearly $5B in TVL today.

However, usurp Uniswap they did not. Uniswap eventually launched a token of its own (there’s speculation that OpenSea may one day do the same) and has maintained its standing as crypto’s dominant DEX with over $7.5B in TVL today. It’s also worth noting that no contentious hard fork (Bitcoin Cash, Ethereum Classic, etc) or vampire attacker (SushiSwap, Swerve, etc) has ever supplanted an incumbent.

While Sushiswap has enjoyed success, it has had its fair share of struggles as well. Community infighting between the core team and Sushi token holders led to the exit of several high profile team members, including the project’s CTO. Once LooksRare hands governance over to LOOKS holders, it will likely be reminded of how nascent and messy DAO governance truly is.

Lastly, for LooksRare users, it bears mentioning that anon teams always come with rugpull risk. On top of that, LooksRare’s smart contracts launched unaudited and without a public GitHub repo — so trader beware.

Top analysis on LooksRare and past vampire attacks

This is the Author Bio 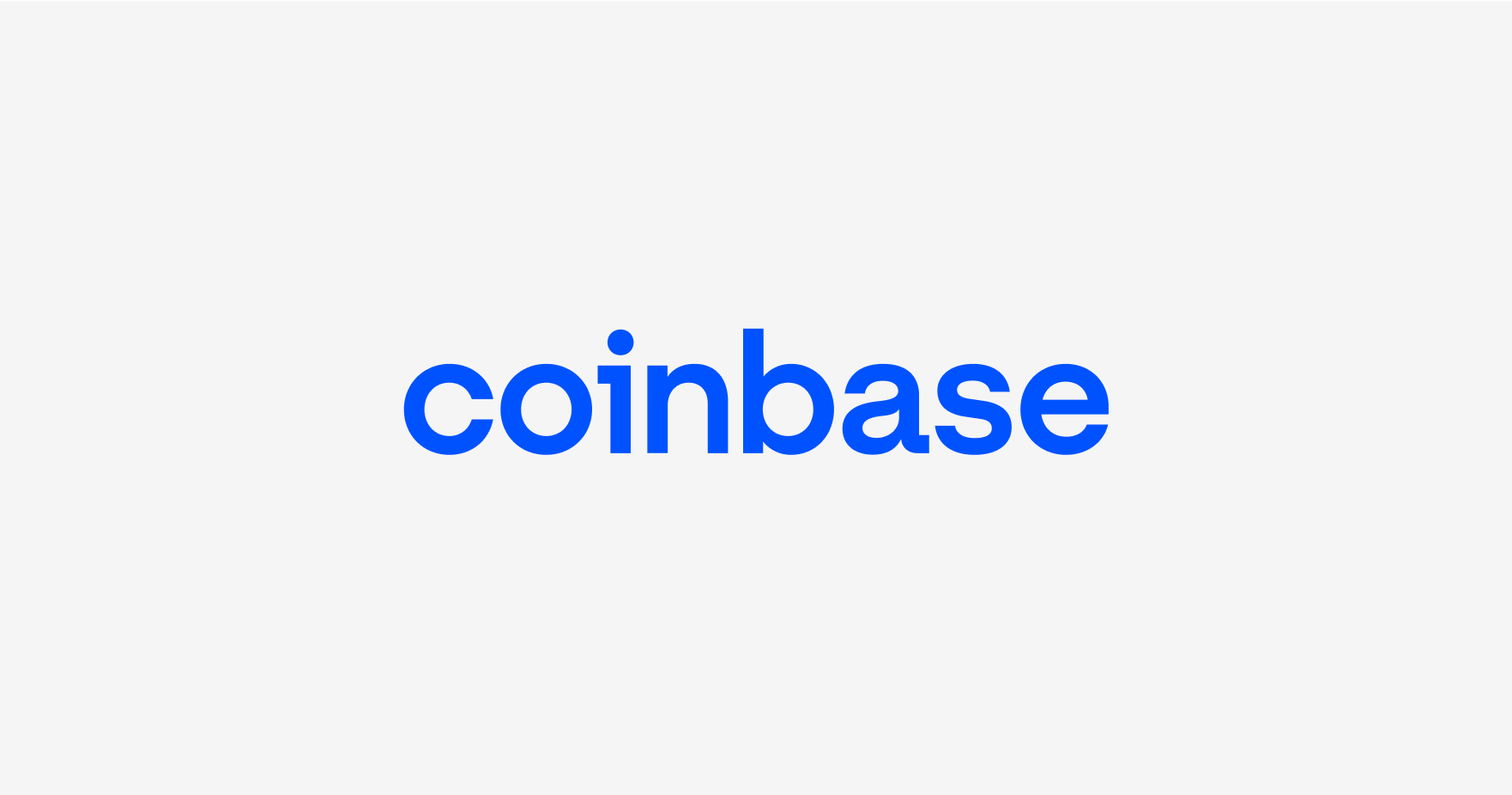 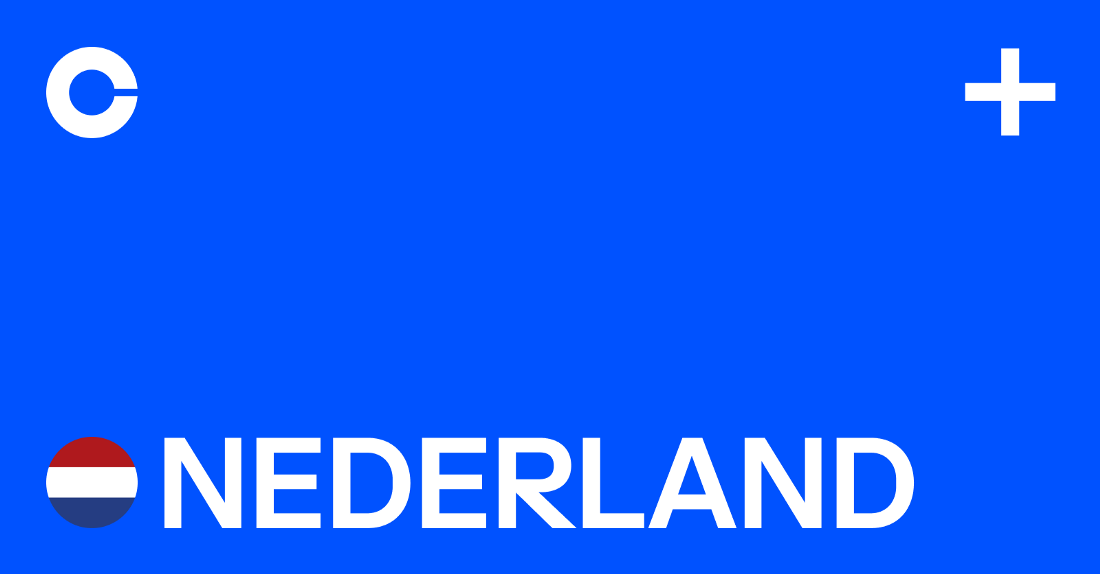