A lead up to the 3rd Bitcoin halving

To date, Bitcoin has undergone two halvings (2012 and 2016), and we are quickly approaching the third.

For background, Bitcoin pioneered a deflationary economic model by setting an upper limit of 21 million bitcoins. In order to spur adoption, issuance was initially set at 50 BTC per block (every 10 minutes), and set to decay in half every four years as the network presumably grows more valuable. This event is now colloquially dubbed the halving.

In inflationary terms, this moves Bitcoin from ~3.6% annual inflation to 1.7%, less than USD’s target inflation (2%) and roughly on par with Gold, potentially strengthening the narrative of Bitcoin as digital gold — a new kind of store of value.

Following simple supply and demand analysis, each halving decreases supply, and is commonly believed to be a driver for increased price. But what has happened in past halvings, and what can we learn?

BTC’s momentum after past halvings

Bitcoin’s 1st halving occurred in early 2012, when the Bitcoin ecosystem was small, fragile, and volatile. 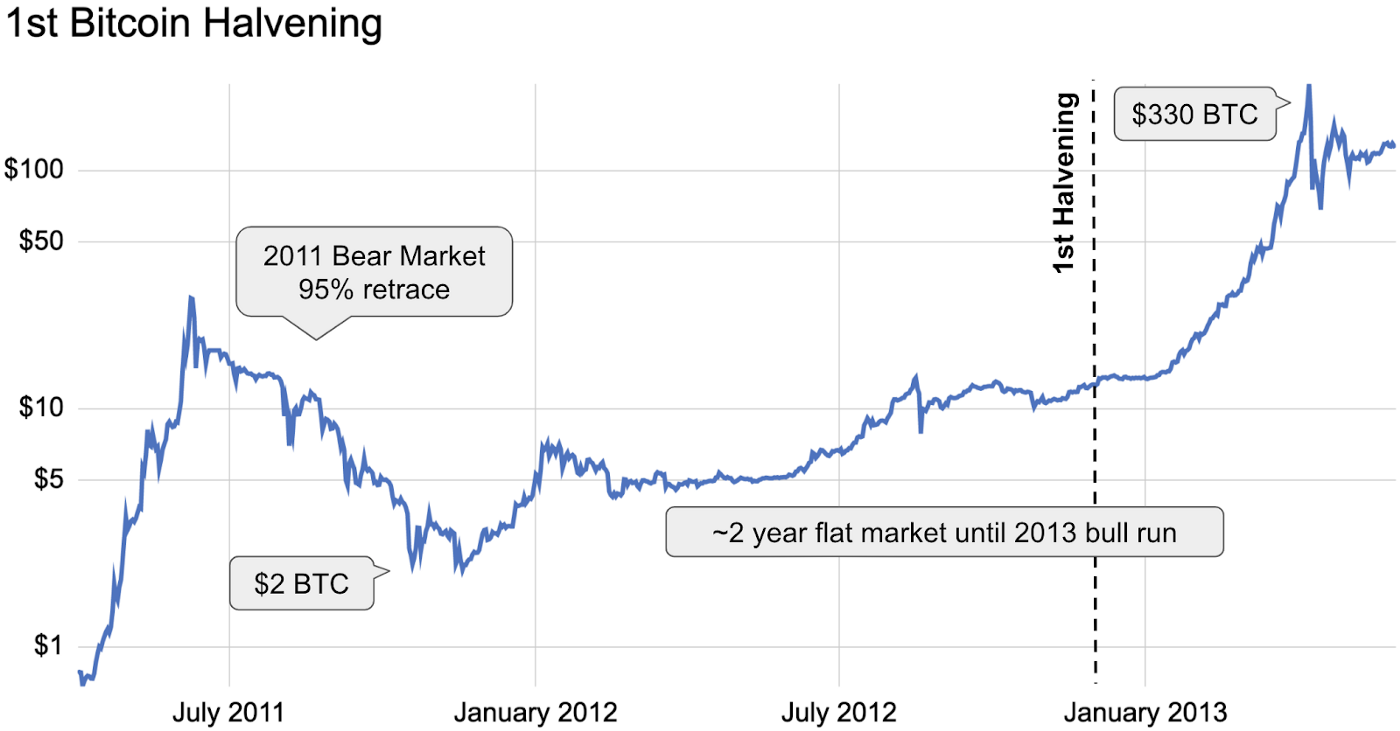 Following a long sideways market in 2012, the 1st halving itself was anticlimactic but was followed a few months later by a significant bull market. Smashing new all time highs and setting Bitcoin up for an explosive end to 2013, crossing $1300. 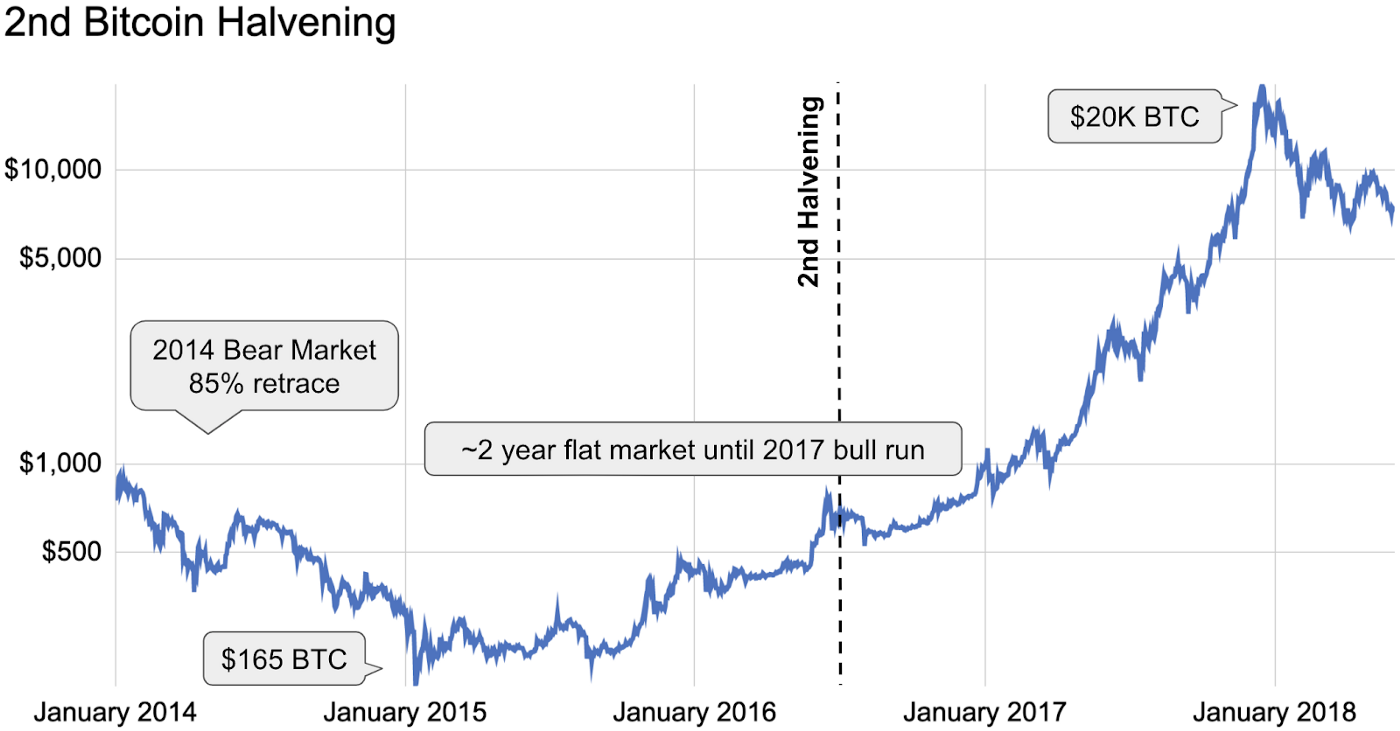 Fast forward 4 years, once again Bitcoin was in a long sideways market after falling from the $1300 peak in 2013. The halving itself was again nondescript, but bitcoin began to build strong momentum ~6 months later leading to the unprecedented 2017 run.

3rd halving on the horizon

Following the first two halvings, we note that most of the exponential growth occurred after the halving. In fact, in each circumstance the halving itself was more of a non-event and any possible impact took ~3–6 months to appear. 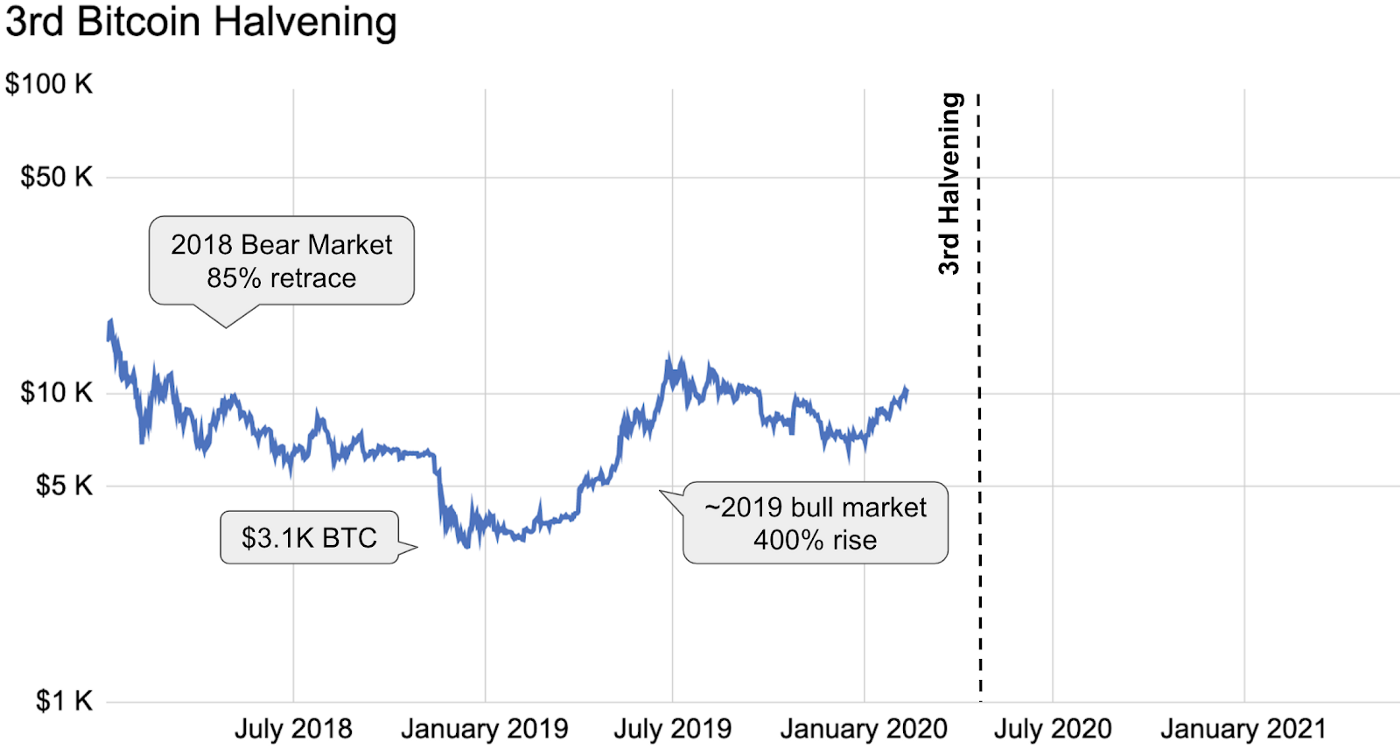 Today, for a 3rd time we are in the midst of a long sideways market leading into the halving (although 2019 did see a mini run in the middle, but has since tapered off).

But notably different from past halvings, the crypto ecosystem has significantly matured. Crypto services have made it simple to buy, hold, and use Bitcoin, giving easy access to anyone who wants exposure. On the other hand, it’s also much easier to bet against Bitcoin and go short (via margin, futures, and derivatives). This was difficult in 2016, and completely absent in 2012.

Compared to 2016, crypto has also gained widespread notoriety. Most people have at least heard of bitcoin, and a number of institutions have (at minimum) developed an internal perspective on this asset class.

So is the halving priced in? There are generally two schools of thought:

Studying prior Bitcoin halvings is a fascinating insight into market behavior and the evolution of Bitcoin as a new asset class. What will happen during and after the next halving? Anyone predicting the future is ultimately guessing, so we’ll have to wait and see. At minimum, the coming halving should produce a strong current of Bitcoin press, opinions, and theories.

It quickly became apparent that building novel smart-contract platforms is exceedingly complex, and nearly all platforms experienced significant delays (including ETH 2.0). Today, some of the most anticipated platforms are finally on the cusp of deployment.

Here’s an overview of some upcoming projects:

DFINITY aims to build a decentralized “Internet Computer,” where they would enable the public Internet to natively host backend software, transforming it into a global compute platform. Internet services would then be able to install their code directly on the public internet and dispense with all servers, cloud services, and centralized databases.

There are many implications to this idea, notably revolving around decentralizing the web and enabling open innovation, but also creating a path to autonomous software such as open versions of Facebook or LinkedIn. As a side-effect, it may also carry potentially improved security models and remove IT complexities and costs, among other things. If successful, this would be a powerful paradigm shift in how the internet operates.

To accomplish this, DFINITY has assembled a strong team of technologists and published some breakthroughs in consensus mechanisms to enable larger throughput (Threshold Relay).

Interoperability is a key building block for the crypto ecosystem. By way of example, it could enable crypto-kitties to create a specific blockchain with massive throughput (so you can breed those kittens as fast as you want), but your crypto-kitties could be accessed by Ethereum, and your platform could use ETH, Dai, or any other ERC-20 token (or possibly ETH infrastructure) natively.

The early days of web servers may be a helpful analogy. Back then, a single server hosted several web pages. If any page exploded in popularity, it slammed the whole server and took down all other web pages with it. The internet evolved to segregated, application-specific servers enabling each web page to scale as needed, without impacting anyone else. Replace web pages with blockchains, and this is just one aspect of what interoperability and application specific chains might do for crypto.

Polkadot is led by Gavin Wood (co-founder of Ethereum) via Parity. Their approach is conceptually similar to Cosmos, but differentiated in how their interoperability network handles security.

NEAR is similar in vision to Ethereum 2.0: A proof-of-stake, sharded blockchain with smart contract functionality, but with a twist in consensus design that better protects composability — or the ability for smart contracts to seamlessly interact with each other across shards. Coinbase Ventures is an investor in NEAR.

The NEAR team, a collection of ICPC medalists, believe targeting dapp developers is critical to long-term traction and are emphasizing the developer experience. Their goal is to launch a truly scalable chain with seamless developer tooling and with a built-in ETH → NEAR bridge so end-users can still use ETH tokens (and possibly ETH infrastructure), which would lower barriers to adoption.

In essence, NEAR is similar to ETH 2.0 but built on a new chain and new environment, thus forfeiting some of the significant network effects ETH has acquired. NEAR is planning a launch in Q2 this year.

Each ETH competitor also faces an uphill climb competing against the strong network effects Ethereum has accrued around infrastructure, tooling, distribution, and mindshare.

In the end, each new protocol’s launch is simply the beginning of a much longer journey. And in the long run, these networks could add new functionality to the wider crypto protocol layer, broadening the crypto design space and increasing the potential for impactful dapps.