At some point in the past 6 months, you may have read or heard the terms “Cryptoeconomic Primitives”, “Financial Primitives”, “Crypto Primitives” or just “Primitives” being used in relation to some projects in the cryptocurrency space. The usage of these terms has varied, and some debate has occurred in attempt to clearly define exactly what some of them are.

Broadly speaking, I think there are two categories of primitives being talked about in the cryptocurrency “Crypto” space. The two types of Crypto Primitives are:

In this post I’m going to focus specifically on Cryptoeconomic Primitives.

To help us understand what these Cryptoeconomic Primitives are, it’s helpful to know some definitions it builds on top of:

With these definitions in mind, we can go ahead and define what Cryptoeconomic primitives are:

Protocol based incentives systems that are uniquely enabled by tokens. Also referred to as “tokenized economic games” ².

They enable the coordination and allocation of capital to achieve a shared goal via the use of various economic and cryptographic mechanisms.

A Cryptoeconomic Primitive should be a self-sustaining system, and its intrinsic token must be a necessary element of that system³. In other words, it shouldn’t require anything other than itself to function and the removal of the token would cause it to fail or work less effectively than the system with a token.

A Cryptoeconomic Primitive should result in the predictable coordination of a set of actors (whether it be humans or machines) towards some specific shared goal or outcome. This can include predictably failing in certain situations and knowing limitations.

To find some examples, look no further than the bustling category of Curation Markets: which is a field of primitives that are specifically designed to curate information and reduce information asymmetry⁴. The most notable primitives are Token Curated Registries (TCRs) and Curved Bonding. Both share the same goal to incentivize token holders to curate information, but differ in behavior and output: Token Curated Registries give you a binary outcome (i.e. is this thing “in” or “out” of the registry) where as Curved Bonding systems give you a gradient score of the relevance of something.

These two primitives alone are serving as the foundation for multiple consumer applications, protocols, and platforms that utilize curation markets on their own specific vertical or use case: 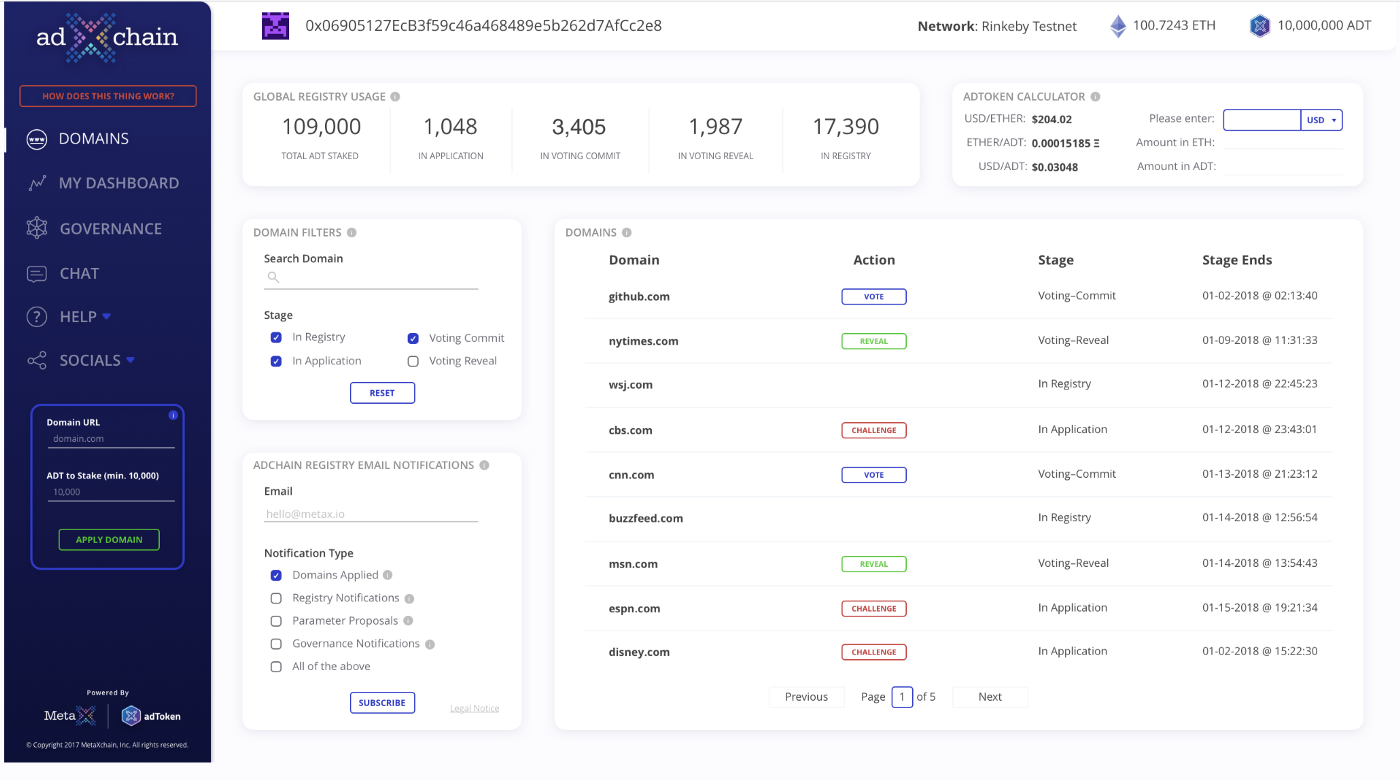 The AdChain Platform uses a Token Curated Registry to maintain a list of domains that are verified as non-fraudulent.

It’s important to highlight some of the existing projects using these primitives because it shows just how important they are to the ecosystem at large. With these two alone, we are seeing broad use cases become possible across a wide range of industries.

Outside of Curation Markets, some other examples of Cryptoeconomic Primitives include:

Design is famously lagging in the cryptocurrency industry. This is because it’s hard—products that can be used by everyone have to simultaneously balance the complexities of the entirely new design paradigms of cryptocurrency with the newfound utility that it enables. Shared standards like ERC20 and ERC721 make it easier to create consistent experiences across multiple products and use cases. The same holds for primitives. The benefits of a highly reliable, predictable and known building block is then being able to design reliable, predictable and known user experiences—in other words, intuitive.

Unlike the creators of blockchains and blockchain-based protocols — who can own the open source networks they created via the token — it is unlikely that the inventors of Cryptoeconomic Primitives will be able to capture the complete value of their creation in the same way. This is because the primitive will likely be independently instantiated as part of another protocol or system. It is a ‘building block’ after all. For the inventors, it will be up to them to utilize their creation in a protocol/network/platform and likely compete with other people using their same invention. The traditional problems of open source economics may apply to Cryptoeconomic Primitives. Luckily, there’s multiple projects that aim to solve that exact problem (most of them ironically using curation markets).

The whole is greater than the sum of its parts

“This is called an “emergent” property of the whole, by which parts and whole differ because what matters is the interactions between such parts. And interactions can obey very simple rules.” — Nassim Nicholas Taleb

Each of these primitives are interesting on their own, but mixed and matched together they are fascinating. The combination of Primitives will enable the creation of protocols and systems that weren’t possible prior to their existence. These emergent systems will be greater than any of the individual primitives on their own. With the continued explorations of existing primitives and invention of new ones, we will undoubtably see rapid, compounding utility—where we can experiment with all permutations of existing primitives, tokens and protocols to create new primitives tokens and protocols to infinity. What does compounding utility look like in practice? Let’s look at what’s happening with some Financial Primitives:

"Can't wait to take out a @DharmaProtocol loan to buy more @CryptoKitties, trade @dydxderivatives options contracts to hedge breeding risk and trade @SetProtocol indexes of various kitty attributes to get broad exposure. This is the open financial system I've been waiting for."

The ability to play each of these Financial Primitives off each other increases the utility of each individual primitive and leads to a total value add that’s greater than the sum of all of them put together. New building blocks means new types of things that can be built. It also means there’s probably a whole field of specialization in just the combination of them.

This is exactly the case in the longstanding world of Cryptographic Primitives, the combination of primitives to create security protocols is a specialization in its own right—this will likely be the same in the cryptocurrency field, Cryptoeconomics is only just getting started.

The emergence of Cryptoeconomic Primitives is an early sign of maturing knowledge and infrastructure in the cryptocurrency industry. The continued advancements and definitions of these primitives makes it increasingly easy for people to design consumer applications that are uniquely enabled by blockchain. You don’t have to be an expert in cryptography, economics and game theory to start creating Cryptoeconomic systems— you just need to know how to read a spec and implement. Consumer applications are coming and they’re coming fast.

Here’s the thing, a Cryptoeconomic Primitive lets you easily instantiate a new human-computer organization out of the box. If you wanted to go off the deep end, you could go as far to say that they are quantifiable building blocks of the internet hive mind. With tokens and cryptocurrencies, the internet hive mind is now tangible. It can allocate capital, an intangible force that drives the tangible world. These Cryptoeconomic Primitives will inevitably contribute to the rewiring of how society functions at large. The blockchain enables new levels of sovereignty to control your own value, and likely other aspects of your life like identity. But it also comes with irreversibility, so once something is deployed it’s extremely difficult to undo—so we best proceed with a healthy dose of caution. Like any tool, it can be used for both good and malicious purposes. We should do everything we can to make sure it’s only used for good.

The chasm is soon to be crossed, and we should be prepared for what’s on the other side.

At Coinbase we want to see new Primitives and their tokens flourish. If you are interested in creating the place where tokens are accessed, used and exchanged in the future, apply to join us.

What are your thoughts?

Do you think Primitives mean something else? What are some other examples you’ve come across? How do you see them developing and taking shape over time? Let me know your thoughts on Cryptoeconomic Primitives and lets kick off some more discussion!

Want to start building your own Primitives?

I’d highly recommend Trent McConaghy’s in depth post on token engineering and example Crypteconomic Primitives, or “Token Design Patterns” as he calls them:

Cryptoeconomic Primitives is 9 syllables and a bit of a mouthful. It could be useful to coin a new word like Crymitives, CPrims or something else. H/T to Dai Hovey on this idea.

People you should follow in the world of Cryptoeconomic Primitives.

Huge hat tip to everyone in this list for pushing the space forward and for work you’re doing on Cryptoeconomic primitives and beyond.

Things I read that influenced this piece

Thanks to Linda Xie