Eleven years ago today, the Bitcoin white paper was published, forever changing technology, finance, and our relationship with money.

As with other technologies, money has gone through many upgrades over the years. It’s evolved from trading seashells and metal coins to tapping apps and swiping cards, and from facilitating transactions between neighbors to connecting billions of people worldwide. However, our current financial system still has constraints that result in billions of people unable to open a bank account or access stable currencies, international transactions that can take days, and more.

Bitcoin is the latest breakthrough in a technology that’s millennia old. And although Bitcoin was invented only 11 years ago, it’s already changed the way the world thinks about money. To celebrate the 11th anniversary of the publishing of the Bitcoin white paper, we examine eleven quantitative indicators that Bitcoin is gaining momentum, enabling economic opportunity, and increasing global utility.

Few transformative technologies have captured the public’s interest — and imagination — as quickly as Bitcoin has in just 11 years. Email was invented in 1972 but it took until 1997 for adoption to surpass 10 million people. The television set was invented in 1927 but by the end of the 1940s only 2% of American families owned one. Bitcoin, on the other hand, went from an idea in 2008, and a first transaction in 2009, to millions of users in the US alone in 2019, or an estimated 9% of Americans.¹

The first Bitcoin transaction occurred on Jan. 12, 2009, when Satoshi Nakamoto sent 10 BTC to computer programmer Hal Finney. Since then, activity on the network has steadily accelerated, up and to the right, regardless of movements in price.

Bit-sized fact: Americans typed “Bitcoin” into Google more times in 2018 than they searched for a range of headline-making phrases, from “royal wedding” to “election results.” Read more in the recent Coinbase Report: United States of Crypto.

More than 55,000 nodes — essentially computers running the Bitcoin software — are connected to the Bitcoin network. Nodes are the fundamental source of truth for the Bitcoin ledger, and are responsible for recording and validating transactions. While the Bitcoin network could theoretically operate on just a handful of computers, more nodes increases decentralization and security. By allowing anyone with a computer and internet access to run a node, Bitcoin allows anybody, anywhere, to have a vote in this global system.

Although Bitcoin was first conceived as a peer-to-peer electronic cash system, it’s become much more than that — it’s now also a popular investment and store of value, similar to gold. This is especially true in areas with high economic volatility.

According to a national survey of 4,415 people that Coinbase conducted in partnership with Qriously, investors think cryptocurrency, e.g. Bitcoin, will have a higher return than ETFs, index funds, and stock in their own company ten years from now.²

Since 2013, bitcoin has outperformed the world’s most popular stock indexes, including tech stocks and the S&P 500. While bitcoin’s price fluctuates, it’s trending up and to the right following many bull runs. This year, bitcoin has also outperformed world stock market indexes, generating a +132% return. In comparison, the Nasdaq 100 generated +17%, the S&P 500 +12%, the FTSE Europe 100 +11%, and the FTSE ASEAN 40 -3%.

If you had bought $10 worth of bitcoin starting on Oct 21, 2015, and continued to do so every month for the next four years, your total investment of $480 would be worth around $3,337 today — a gain of 595% (as of 10/21/19).Dollar-cost averaging, or buying bitcoin on a regular cadence, is a popular way of gaining long-term exposure to this new asset class. Buying bitcoin on a regular cadence is also called “stacking sats,” in reference to the satoshi, which is equal to 0.00000001 BTC.

Bit-sized fact: 77% of investors with higher incomes ($200k+/year) who have cryptocurrency in their portfolio own bitcoin, according to the Qriously survey.⁴

Bitcoin was originally created to be “electronic cash” that could be used for everyday transactions instead of traditional cash or credit, but that hasn’t been the main driver of its growth to date, outside of a few regions experiencing economic volatility. However, millions of people are already transacting on the Bitcoin network, thousands of stores are accepting Bitcoin payments, and new technologies are making it even faster and cheaper to use Bitcoin daily.

Bitcoin’s best known attack vector involves a bad actor altering the Bitcoin network by controlling more than 50% of the network’s computing power, or hash rate. Known as a 51% attack, this would allow the attacker to double-spend their transactions and/or censor other’s transactions.

Bitcoin’s hash rate is important because it measures how secure the network is. The higher the hash rate, the more computing power is needed to compromise it. Bitcoin’s hash rate recently reached a record high of 108 million terahashes per second. Bitcoin is far and away the largest computational network ever created, and the most secure blockchain. This means controlling a majority of that computing power requires an enormous amount of computer hardware — hardware that would cost over $4 billion to buy outright. And even if someone happened to have a few billion burning a hole in their pocket, the costs to acquire, store, and power that hardware would be exorbitant.

Compared to the legacy financial system, Bitcoin fees and transaction time are minimal. Sending an international wire transfer by major US banks costs around $45, can take days to process, and can be done only during banking hours. Bitcoin transactions, on the other hand, typically cost around $0.75,⁸ can be done 24/7, are instantly seen on the network, and are widely regarded as secure after confirmation of six blocks, which happens in about one hour.

A current limitation is the number of transactions the Bitcoin network can process per second, currently around seven. The Bitcoin Lightning Network is one path to increased throughput by using the concept of a bar tab. Instead of settling every single transaction on the Bitcoin blockchain every single time, the Lightning Network allows individuals to carry a bar tab with everyone else, where many transactions can take place back and forth and only the final consolidated balance is periodically settled on the main Bitcoin blockchain.

The number of Lightning channels has grown 19x in this year alone, and Lightning Network node participation recently surpassed 10,000 nodes in 83 countries around the world.¹⁰ 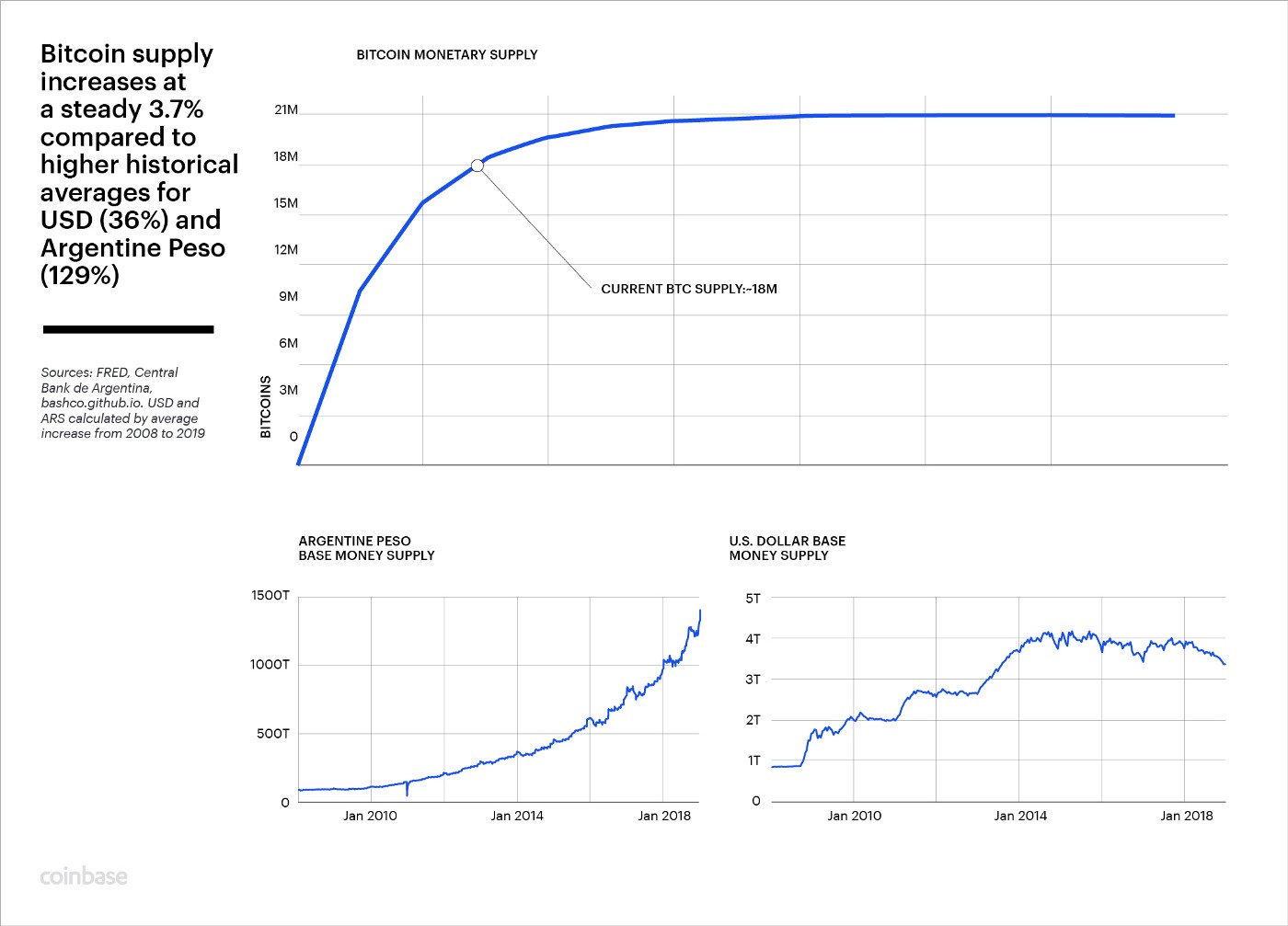 Bitcoin’s underlying code controls how much new bitcoin is created and limits the maximum amount of bitcoin that may ever exist. Today, on Bitcoin’s 11th anniversary, over 18 million bitcoins have been mined, further edging toward the 21 million maximum, which is estimated to be reached in year 2140.

By programmatically controlling the number of new bitcoin created, Bitcoin’s supply inflation is predictable and steady. Fiat currencies, on the other hand, can have wildly fluctuating supplies that are impossible to predict. Since 2008, the average supply increase for the US Dollar has been 36% per year, and 129% per year for the embattled Argentine peso. In comparison, Bitcoin’s annual supply increase is currently 3.7%, and will fall next year to 1.7%.

What’s next for Bitcoin?

Hal Finney, the computer developer who was the recipient of the world’s first Bitcoin transaction, said: “the computer can be used as a tool to liberate and protect people, rather than to control them.” Bitcoin is the world’s first global currency that harnesses the power of computers — and humankind’s innate need to innovate — to enable worldwide economic freedom. We’re looking forward to what 2020 brings in Bitcoin adoption, innovation, and interest.

Coinbase doesn’t provide investment advice, and this article shouldn’t be viewed as investment advice. Always make your own independent assessment of whether any particular investment or investment strategy is right for you, your risk tolerance, and financial means, before entering into a transaction. When in doubt, consult with a professional financial advisor.