On October 6th, 2022, Binance’s BSC Token hub, a bridge between the old Binance Beacon Chain and the Binance Smart Chain (BSC) also known as BNB Chain, was exploited by an attacker resulting in the unauthorized transfer of 2M BNB (~$586M).

Vulnerability root cause analysis confirmed a flaw in the IAVL verification implementation developed by Cosmos, and incorporated by BSC into their contract’s proof verification process. The same vulnerability affected other projects implementing the flawed IAVL library which resulted in an emergency patch from Cosmos.

The attacker swapped stolen assets using Venus Finance and bridged through Stargate Finance and Anyswap to Ethereum, Avalanche, Polygon, Fantom, and Optimism networks. The attacker was careful to swap any assets that implement blocklisting (e.g. USDC, USDT) before consolidating the majority of them on the Ethereum blockchain. However, a large sum of funds remain on various L2 and L1 chains in three distinct addresses.

Following the discovery of the compromise, BNB Chain halted operations for approximately 8 hours by requesting all validators temporarily suspend BSC in order to investigate the reported activity. Upon identifying the root cause, BNB Chain released an updated version of BSC which hard forked the blockchain, patched the vulnerability, and made node upgrade a requirement. As a result of the BNB Chain halt and assistance from asset issuers, a portion of the funds were frozen and transfers were prevented, limiting attacker funds taken off of BSC to an estimated $110M.

The complexity of the vulnerability, exploitation, and cross-chain bridging/swapping indicates the threat actor is likely well versed in various DeFi protocols as well as blockchain exploitation. The responsible actor(s) are still unknown as of this report's initial publication.

If any dapps or service providers think they’ve been impacted by a frontend hijack like this, please reach out to us at security@coinbase.com

Special thanks to Peter Kacherginsky, Zuhdi Abdelkarim, and Heidi Wilder for their research on this incident. 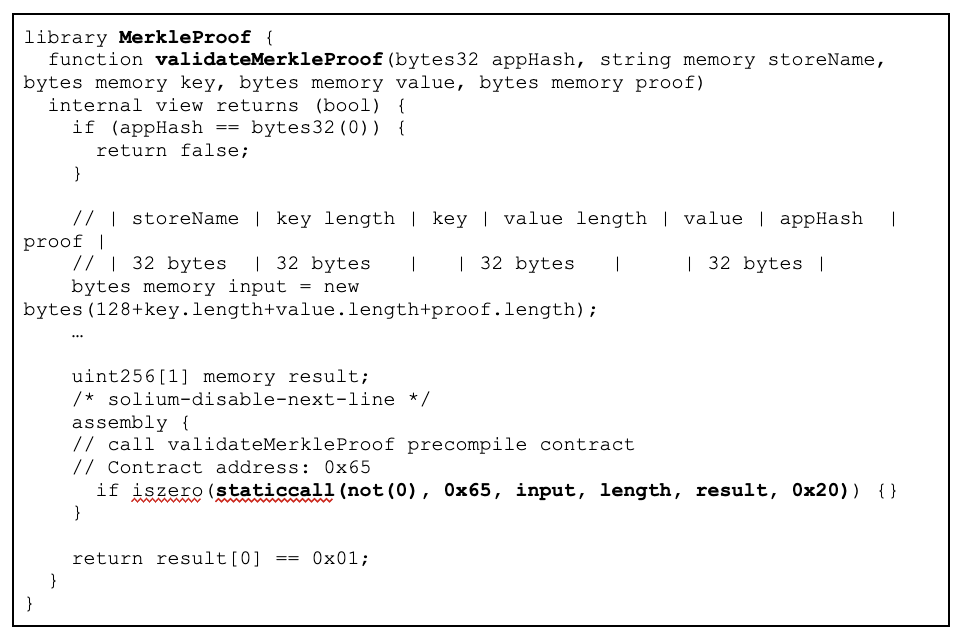 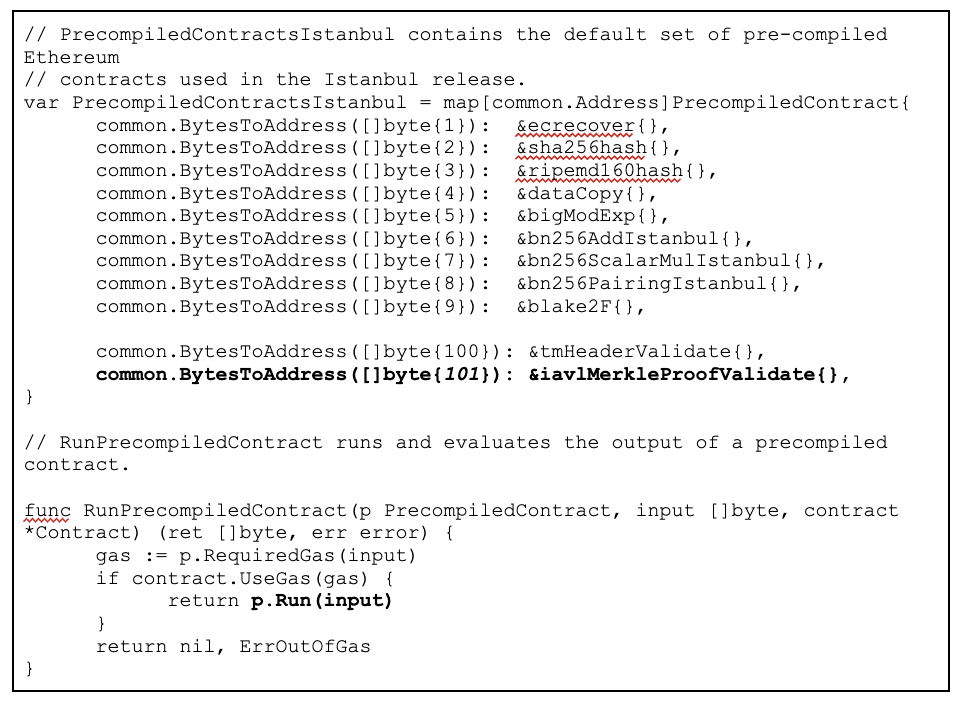 The handlePackage method can only be invoked by accounts registered as relayers. A registry of relayers is kept by RelayerHub 0x0000…1006 system contract. Anyone can become a relayer by calling the registermethod and paying a 100 BNB deposit: 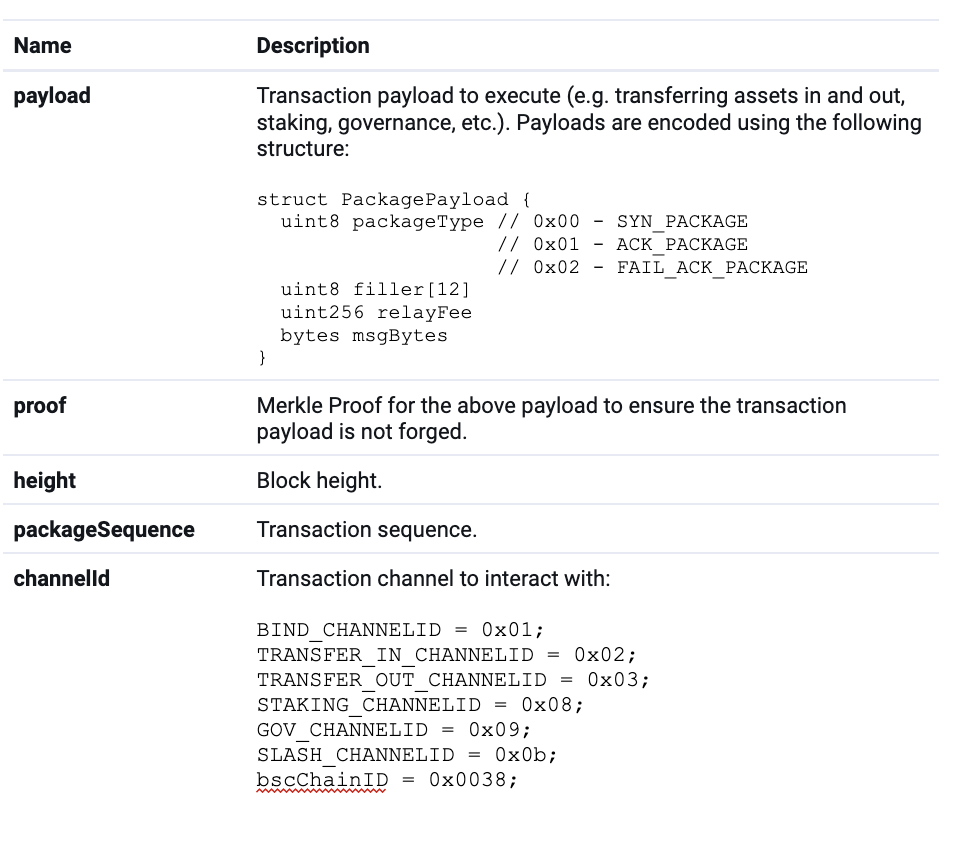 Payloads include variable size msgBytes fields which are interpreted based on the packageType and channelId. For example, 0x7957…f433 transaction submits the following payload to channelId 0x02 (TRANSFER_IN_CHANNELID):

The above can be interpreted using the following structure:

Putting everything together, the sample transaction 0x7957…f433 payload instructs the TokenHub contract to transfer 0.05 BNB to0x4e65…645d.

The iavlMerkleProofValidate reference is a Go library embedded in all instances of BSC node software critical to ensuring that submitted merkle proofs are valid. The library has a number of dependencies including Merkle Tree implementation from Tendermint and IAVL+ Tree implementation from Cosmos. IAVL Tree stands for Immutable Adelson-Velsky and Landis (AVL) data structure which implements a self-balancing Binary Search Tree (BST). IAVL trees allow for efficient lookups to quickly prove existence or non-existence of values stored in leaf nodes.

In the case of the CrossChain contract, IAVL lookups are used to prove or disprove the presence of a cross-chain transaction and a respective payload hash. CrossChain contract triggers the iavlMerkleProofValidate precompiled library by making staticcall as illustrated in Image 1 in the BSC System and Precompiled Contracts section above.

The iavlMerkleProofValidate precompiled contract decodes the provided proof buffer as a Merkle Tree proof data structure and forwards it to the IAVL library for verification: 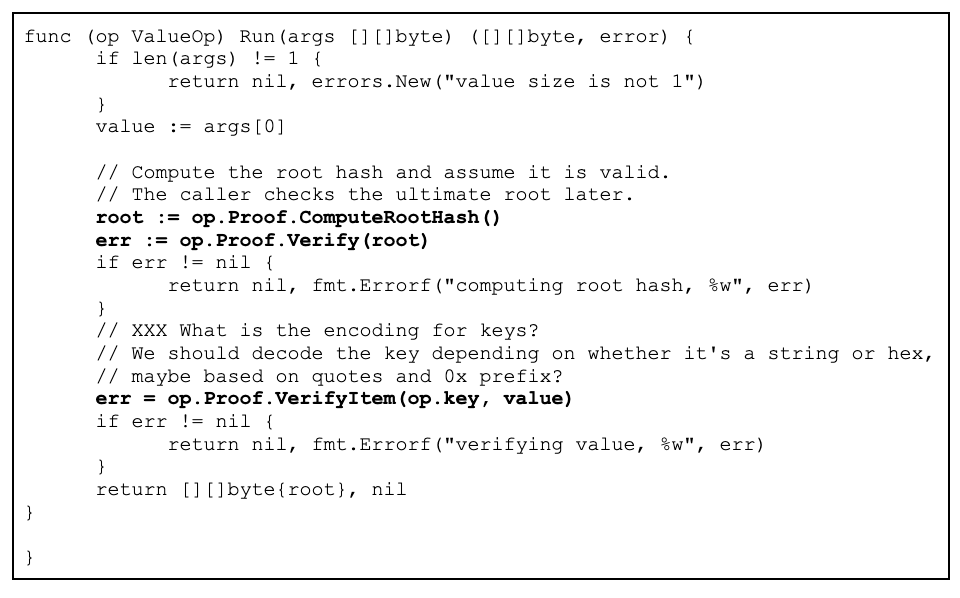 Root verification involves computing the root hash from scratch using computeRootHash and comparing it against the root hash specified in the proof. 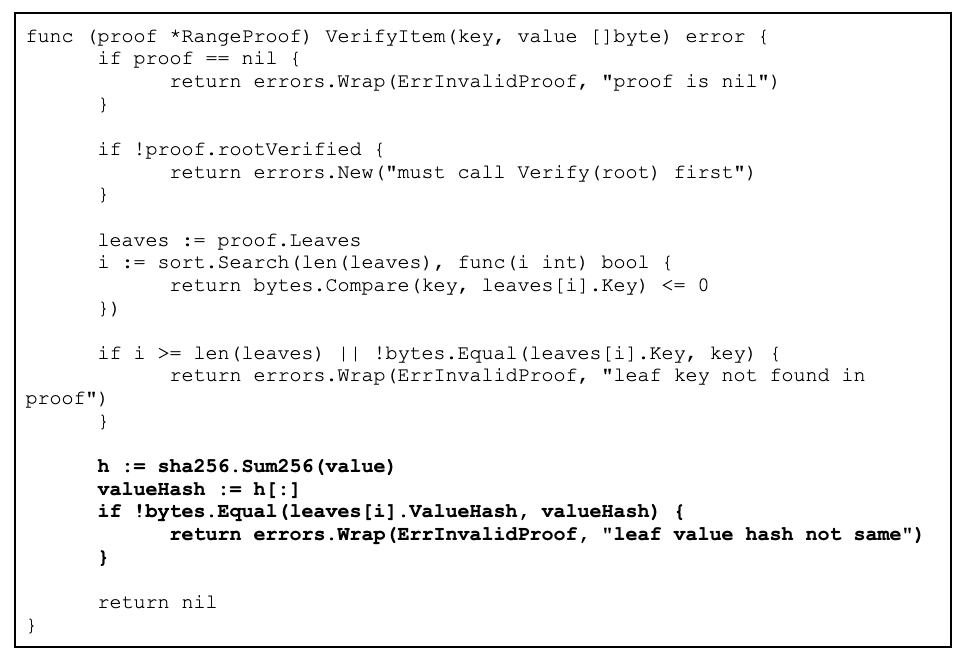 IAVL library computes a SHA256 hash of the supplied value and tries to locate it in tree leaves.

To best illustrate the above flow consider the previously mentioned transaction 0x7957…f433 with the following parameters: 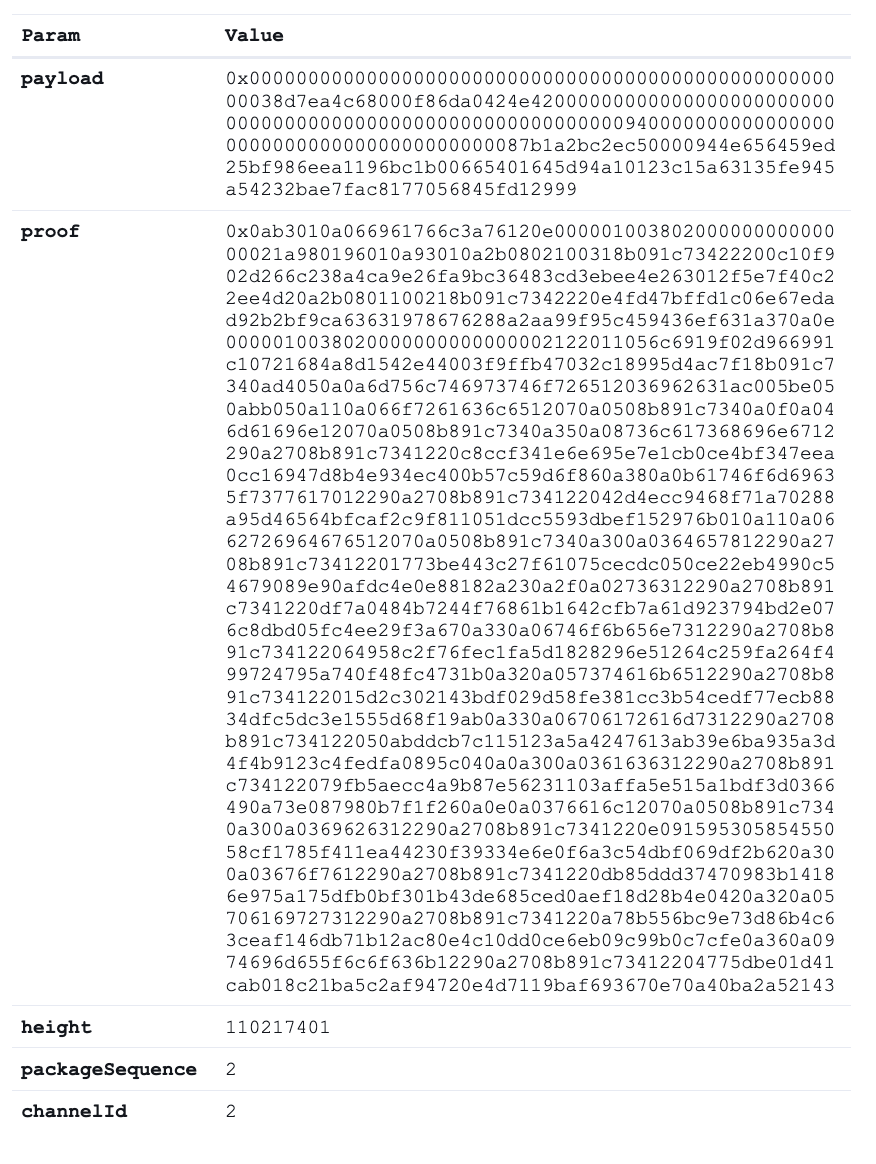 The proof parameter can be interpreted as follows: 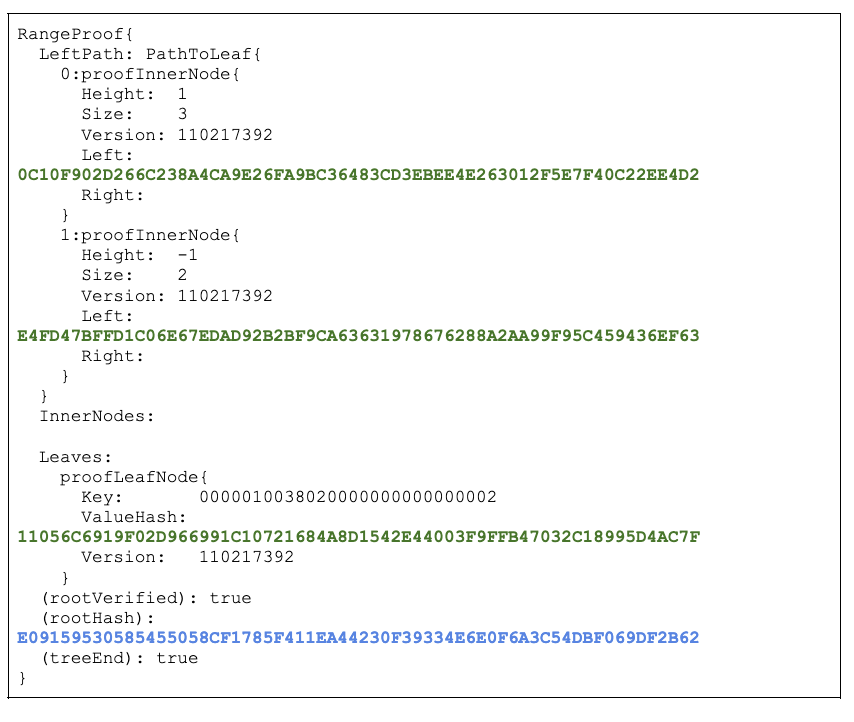 The IAVL library will compute the rootHash from the above tree structure to come up with the same value specified in the proof:

After determining that the proof tree is trustworthy, the IAVL library will compute the hash of the sample payload for the transaction (listed in Figure 6) and search for it in the proof tree:

The vulnerability in the IAVL processing of proofs arises in the way the root hash of the proof is calculated and verified. The computeRootHash relies on the Hash method to process proof nodes to compute the hash: 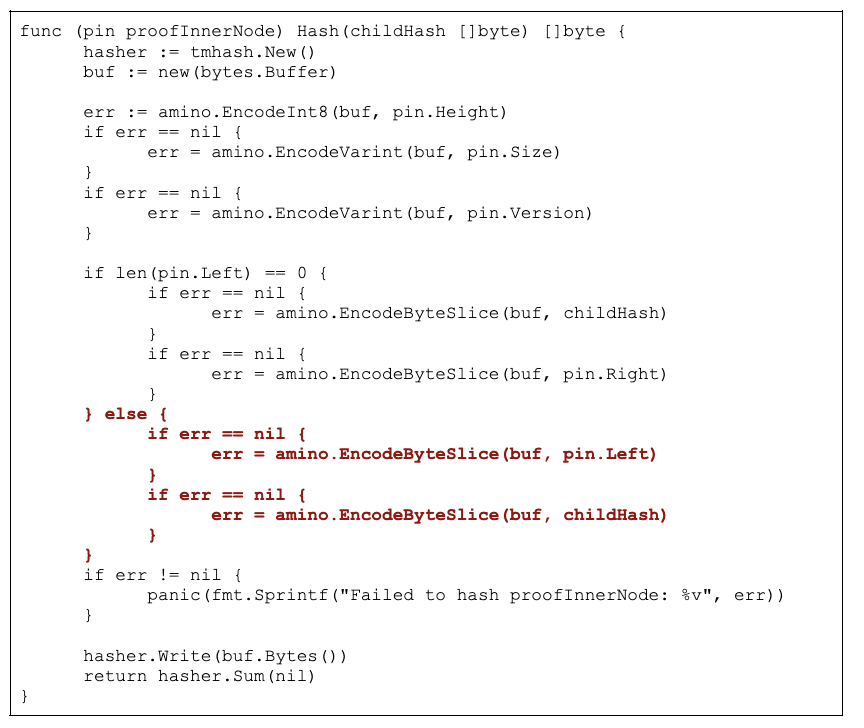 The following section describes all attacker steps from the initial wallet and exploitation through cross-chain bridging and swapping to avoid blocklisting. At the time of the writing, the attacker has not attempted laundering their funds through Tornado Cash or similar anonymization platforms.

On October 5, 2022, prior to the compromise, the attacker's address 0x489a87 on BSC, received two transactions from ChangeNow (tx 1, tx 2) for 101.5 BNB in total. These assets were used for the next step of their attack flow in registering as a BSC relayer and issuing test transactions. 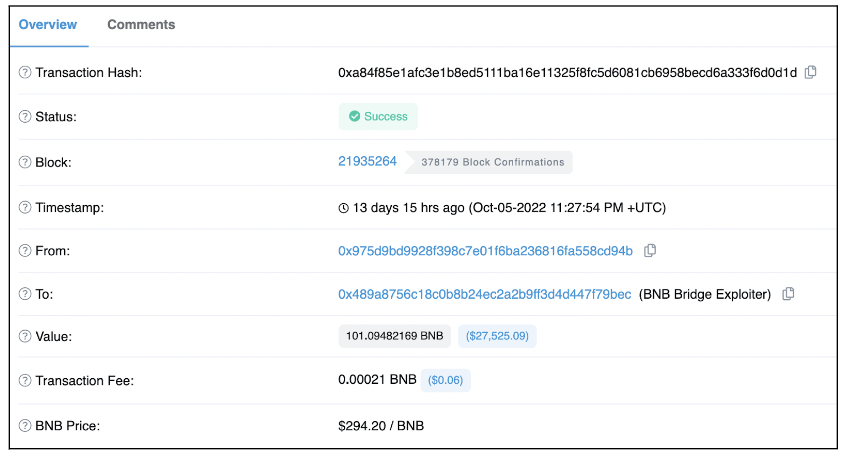 On October 6, 2022 the attacker was trialing various protocols and testing possibly for liquidity and traceability of funds following the compromise:

Registering as a Relayer

After the trials, the attacker registered a relayer for 100 BNB (tx). In order to successfully submit transactions to the hub, the attacker needed to satisfy the onlyRelayer modifier required by the handlePackage method in 0x0000…2000. Anyone can register with BSC as a relayer provided they deposit the required amount. 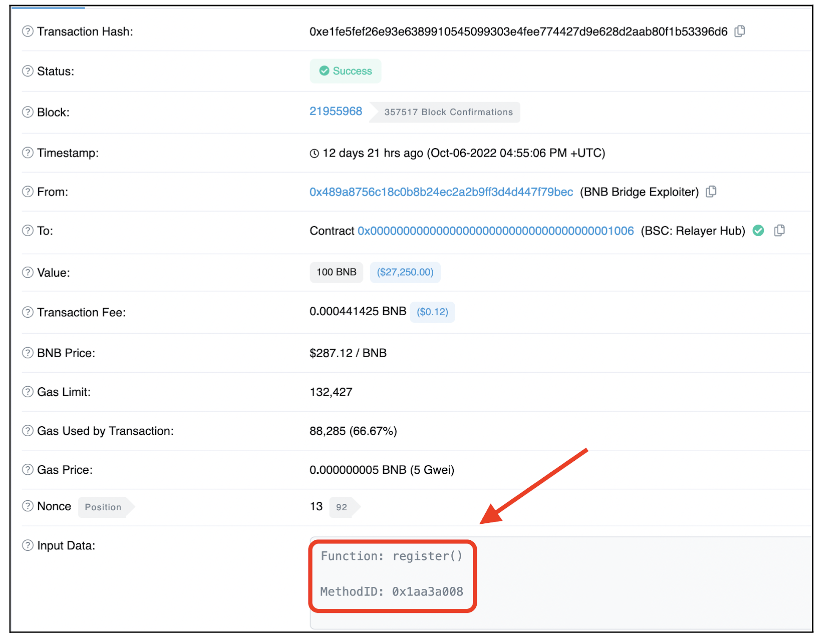 On October 6, 2022 at 06:26:46 PM +UTC the attacker submitted the first exploit transaction 0xebf8…3b8b which takes advantage of the vulnerability described above. The transaction is based on an earlier transaction 0x7957…f433 with a modified legitimate proof: 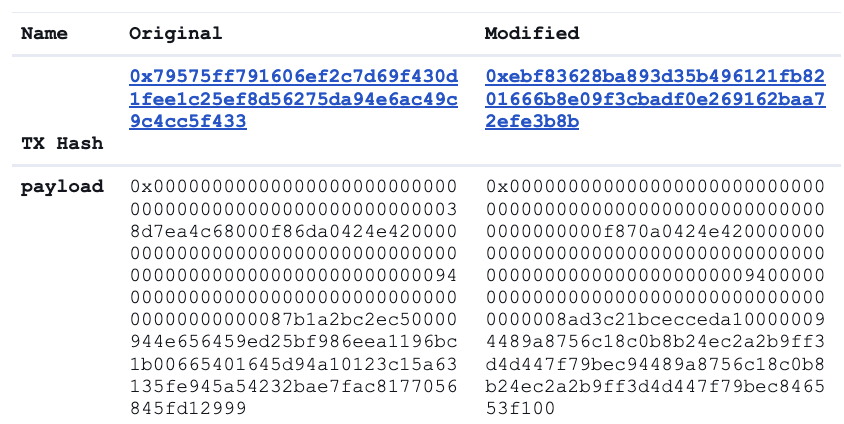 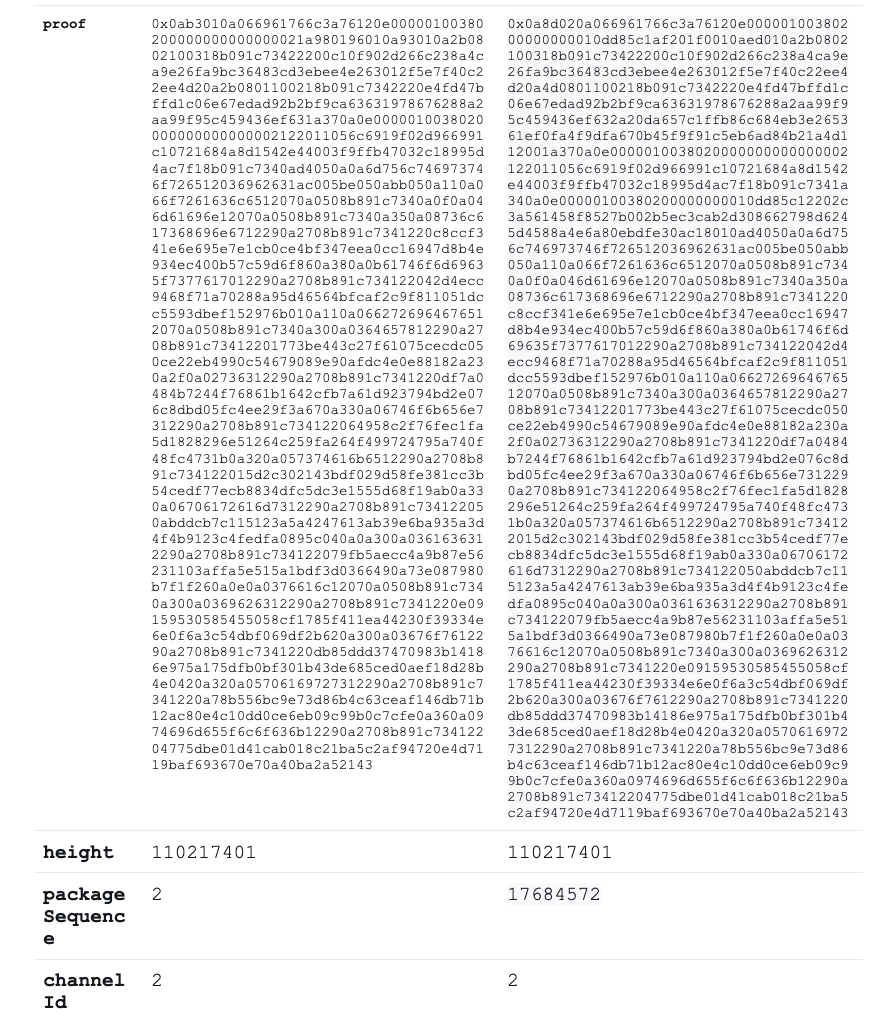 The attacker modified the original payload to transfer significantly more assets. It can be decoded using the same method used in Figure 6 above:

The payload instructs the CrossChain contract to issue 1,000,000 BNB tokens to the attacker address0x489a…9bec.

To ensure that the above payload is accepted as valid, the attacker also modified the proof to add an additional leaf with a hash value corresponding to the new transfer request payload and an empty inner node to compensate for an increased length: 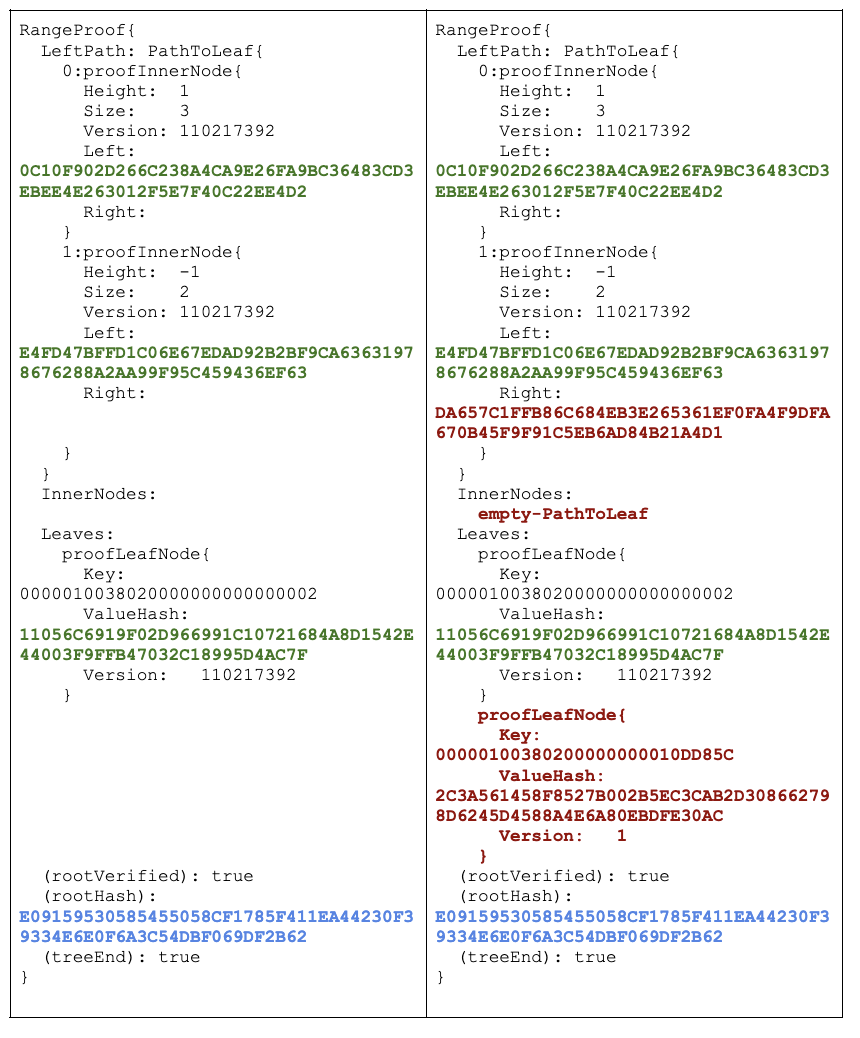 After successfully exploiting the vulnerability in IAVL verification logic, the CrossChain contract instructed the TokenHub contract to transfer 1,000,000 BNB tokens: 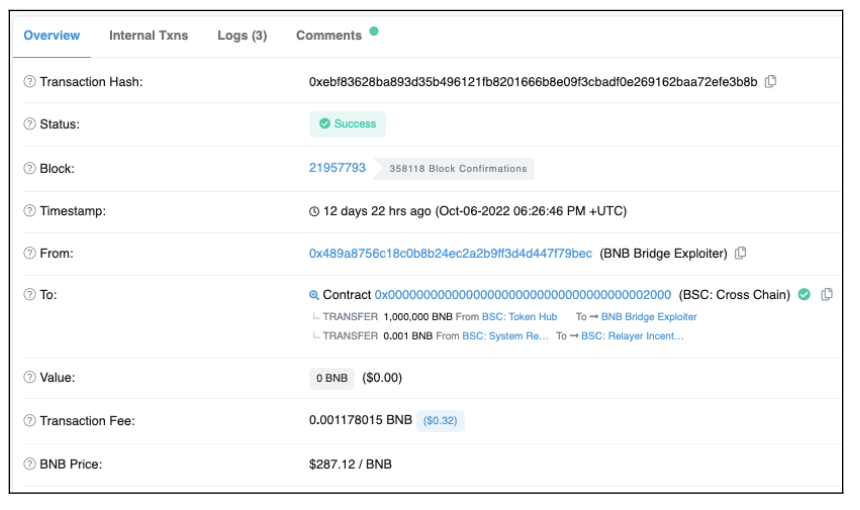 On October 6, 2022 at 08:43:18 PM +UTC the attacker sent a second successful exploit transaction 0xebf8…3b8b to steal another 1,000,000 BNB tokens four hours after the initial exploit. Interestingly, the attacker experienced a number of failed exploitation attempts prior to 0xebf8…3b8b due to the transactions falling behind the current packageSequence number:

Following the exploit, the attacker immediately started moving assets off BSC, often correctly assessing that the chain may freeze and claw back assets following the discovery.

The attacker used Venus Finance to mint vBNB and then used it as collateral to borrow BP USD (Binance’s USDT proxy) and BUSD (Binance’s stablecoin). Once they had BP USD/ BUSD, they used Stargate and Anyswap to bridge over funds to various chains, including Ethereum, Avalanche, Fantom, Polygon, Arbitrum, and Optimism.

Note, BP USD does not have a freeze function associated with it. 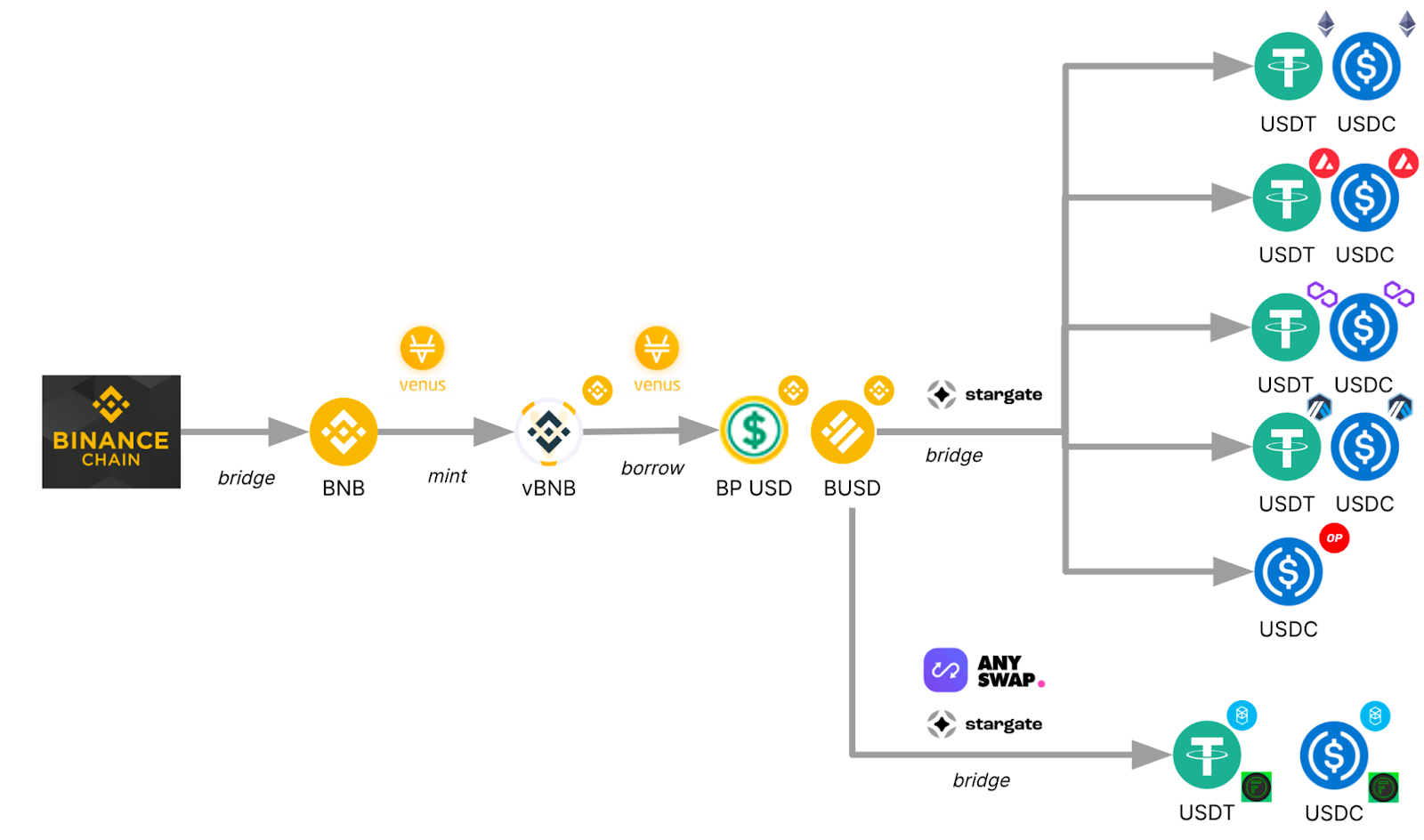 After moving assets to various L1/L2s chains, the attacker performed further swaps to avoid assets which could freeze or blocklist addresses (e.g. USDC, USDT). In particular, it seems the attacker selected chains and protocols with high TVL, but also those that included USDT and USDC contracts that do no include blocklist functionality, as they were set up by various separate  projects as mere proxies of USDT and USDC.

Below is a per chain description of further swaps.

The attacker’s address had already received several million USDC and USDT via Stargate as described above. Additionally, the attacker performed a number cross-chain transfers and swaps to avoid blocklisting:

Below is a simplified graphic displaying the flow of funds on Ethereum: 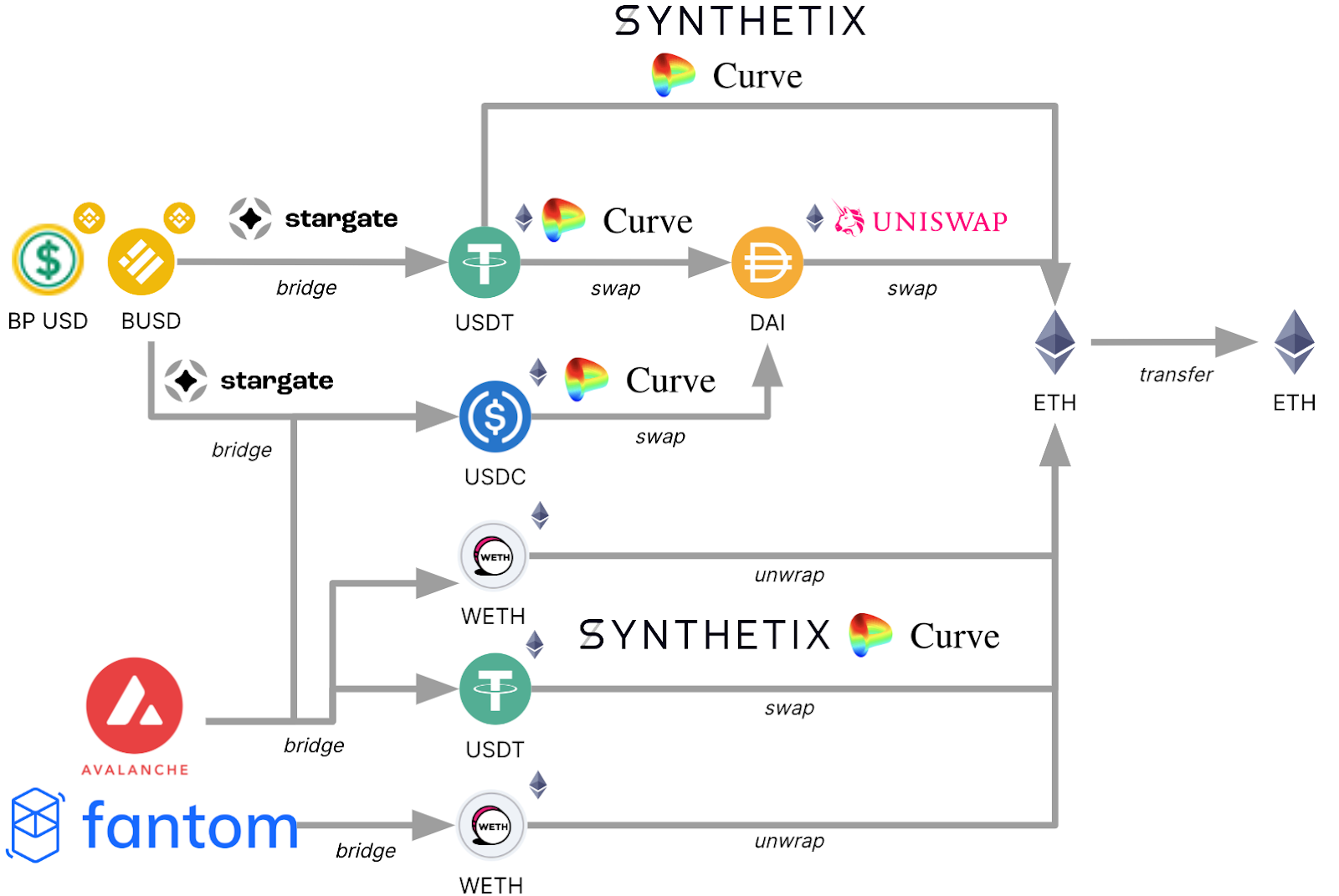 After receiving USDT and USDC via Stargate, the attacker swapped and borrowed USDT and USDT for bridged forms of these tokens (USDCe and USDTe) as well as eWETH.

The attacker managed to do this using TraderJoe and Platypus. They then bridged the funds over to the Ethereum network via Avalanche Bridge and Stargate. 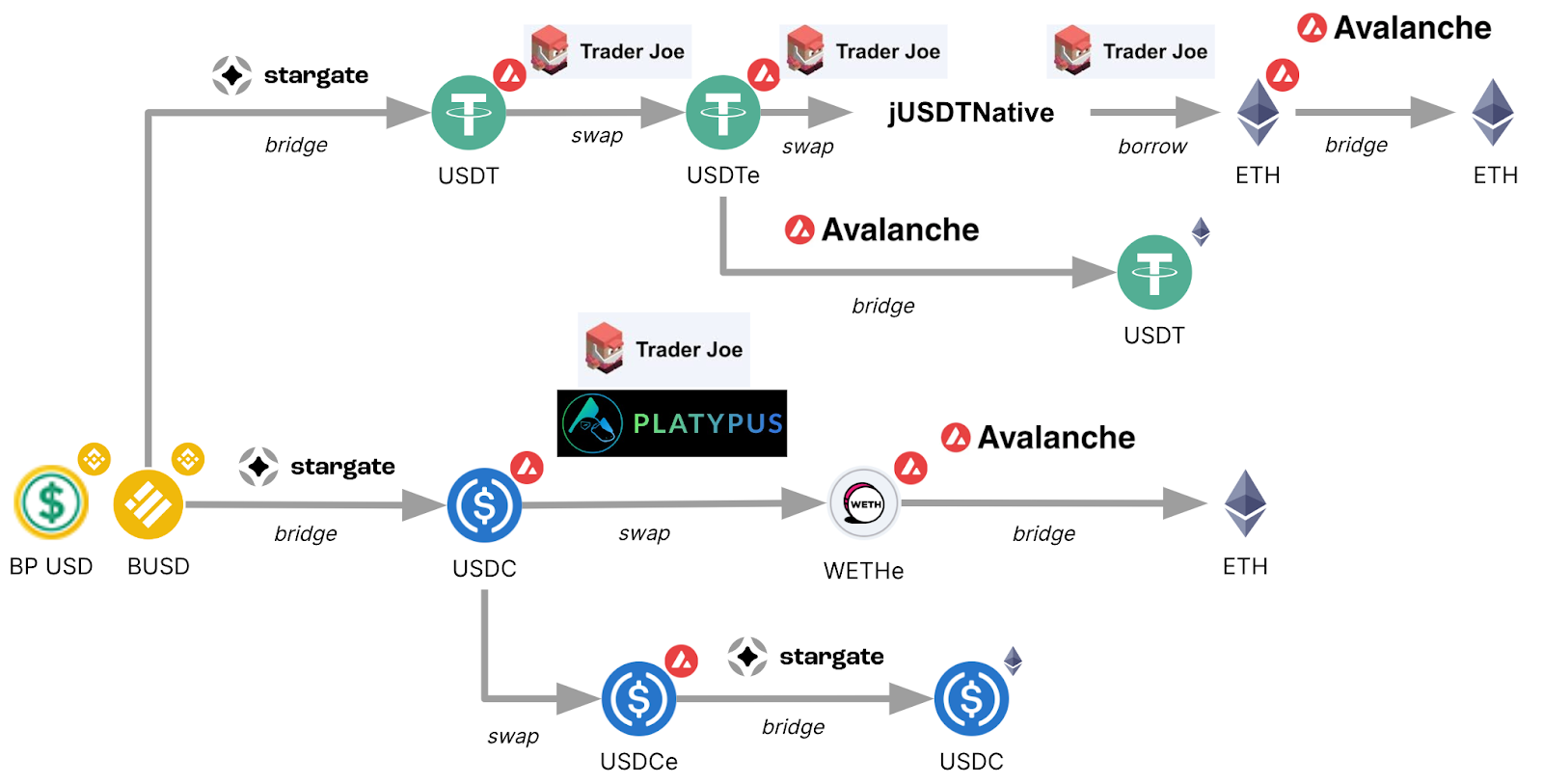 The majority of the leftover ETH was bridged over to Ethereum; however, some were sent to 0x4ad6…29cb, where they still remain.

After receiving bridged USDC and USDT assets from Stargate, the attacker withdrew 3.6m USDT to Ethereum (tx); however, some remain on Polygon’s 0x489a…9bec. 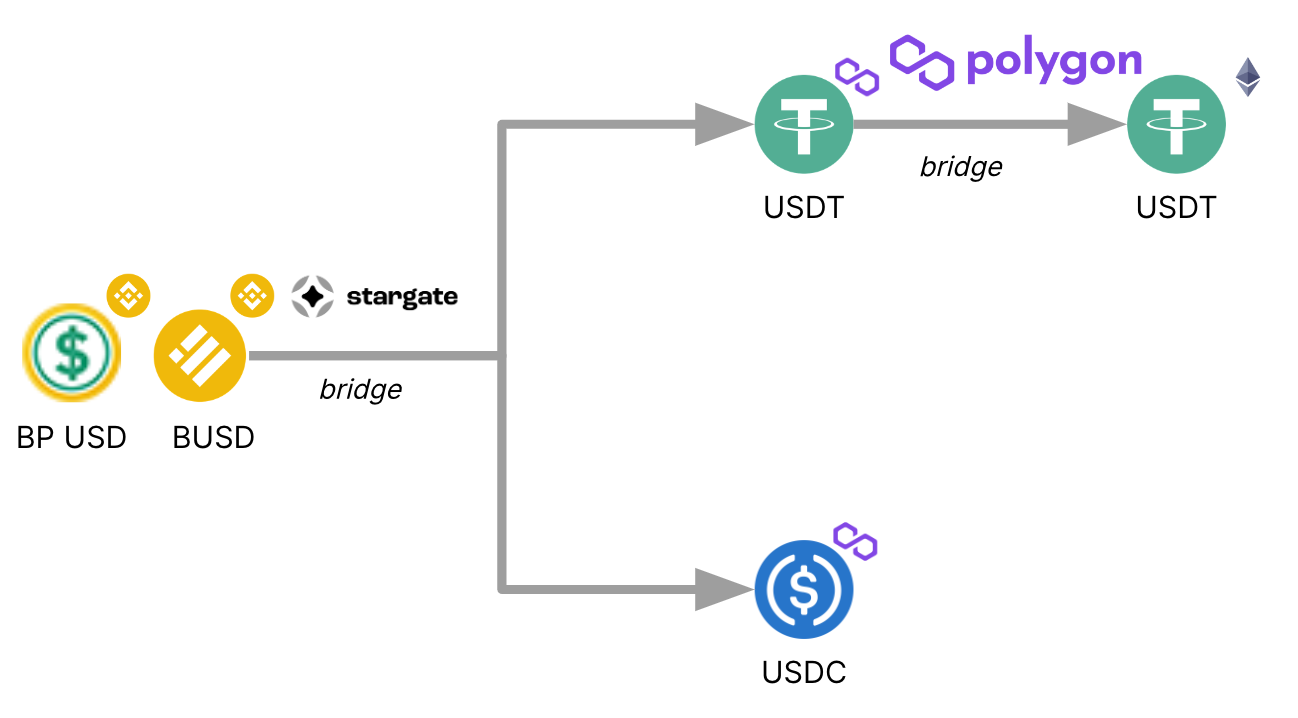 The bridged USDC from BSC continues to remain on Optimism’s 0x489a…9bec.

After receiving the bridged USDC and USDT from Stargate, the attacker swapped USDT and USDC for ETH via Uniswap (tx1, tx2).

The ETH was then transferred to 0xfa0a32  where it still remains(tx).

Where are the funds now?

The attacker has not begun the laundering process through Tornado Cash or equivalent anonymization protocol. Stolen assets are currently located at the following addresses:

Following the compromise, multiple asset issuers and BSC responded by freezing the attacker's assets. Binance halting the BSC network had the most impact preventing the attacker from exfiltrating more than $400M in fraudulently obtained assets. Tether froze the attacker's USDT address at 2022-10-06 21:24:59 UTC which had a moderate impact on the attacker's ability to launder assets on Ethereum blockchain. USDC was the last asset to institute a freeze at 2022-10-07 01:34:34 UTC, at which time the attacker had already swapped most of their USDC assets.

The following timeline highlights key moments during the incident.

Appendix A: Analyst Notes and Indicators

About The Coinbase Threat Intelligence and Special Investigations Teams