Coinbase Around the Block sheds light on key issues in the crypto space. In this edition, Ryan Yi and Justin Mart explore the landscape of smart contract platforms and the emerging competitors vying to challenge Ethereum’s dominance within this space.

Dapps are decentralized applications which are enabled by smart contracts, self-executing agreements that remove the need for a centralized intermediary. Dapps have the potential to cover a universe of use-cases, including financial services (DeFi), gaming, social media, and many others. Over time, Dapps can be collectively managed by a community; operate entirely according to their code rules; and provide a level of global inclusion, censorship resistance, and eventual efficiency not possible in traditional web apps. Because a Dapp provides transparency into user behavior and usage, it can also share its monetization with users of the product in an automated fashion, usually by issuing its own digital asset that is used in operating the underlying application itself. It’s no wonder that the “Utility Phase” of the crypto-economy, where a thousand Dapps can bloom, is such a tantalizing possibility.

In order for Dapps to work seamlessly, they require scalable smart-contract blockchains as the underlying technology platform. Smart-contract capable blockchains provide a high-degree of decentralization guarantees, so that they can serve “as a cohesive digital infrastructure that can be relied upon, with clear guarantees of availability, to maintain a consistent and truthful view of… critical data,” as described by one expert.

This is the market that Ethereum and other smart-contract blockchains are targeting. They are effectively developer platforms, selling their technology stack and their level of decentralization (“economic security guarantees”) to Dapp developers. In turn, as more Dapps coalesce to a specific platform, more economic activity flows through the base layer (helping set asset prices and transaction fees via protocol operation), providing greater security guarantees. Similar to how mobile OS operates as a common operating layer that has consolidated to iOS and Android, there are similar network effects at play currently in crypto protocols, where the leading platforms could generate critical mass and network effects leading to further growth.

It’s no wonder that there is strong competition among smart-contract enabled blockchains, with several new entrants poised to come to market. So what is the current state of the ecosystem, and how can we evaluate different blockchains moving forward?

Ethereum has a firm and clear first mover advantage among the smart contract platforms. It is not only the highest in terms of the network value at $65B, but also dwarfs the competition in several key factors: 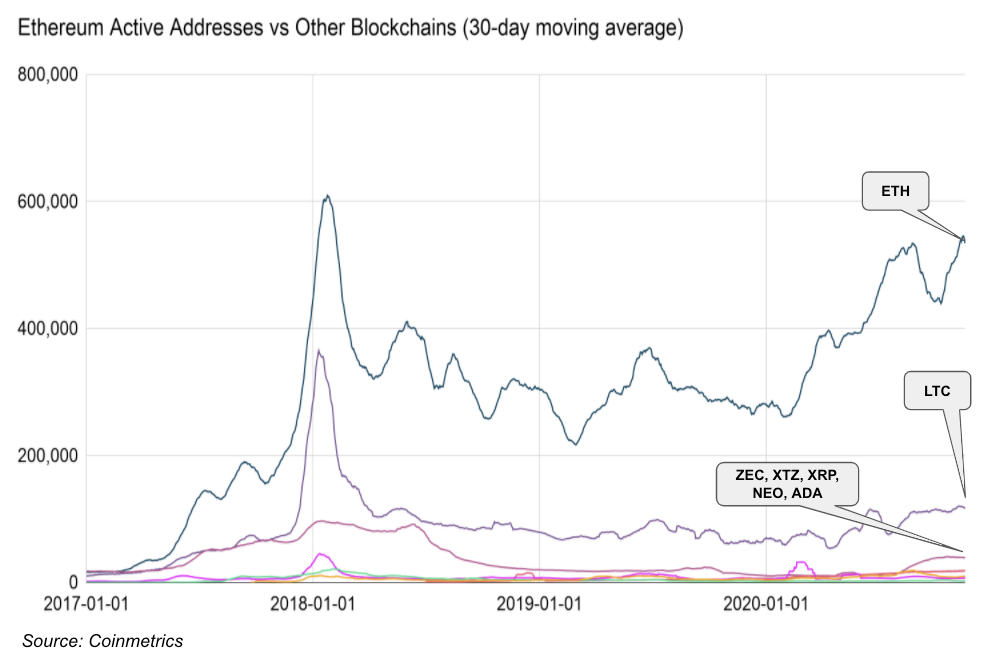 Above all, Ethereum has demonstrated the power of open-source development, where Dapps are able to interact with each other. An analogy here is traditional software development, where a developer might use multiple open-source libraries to code one’s application. Similarly, an Ethereum developer can utilize different parts of the Ethereum-compatible technology “stack,” which is interoperable and specializes in particular functions, to create cohesive applications. Think of Ethereum Dapps as lego bricks. Building on top and alongside is encouraged, and has led to a vibrant developer ecosystem that will be very challenging for challengers to disrupt.

Take catnip.exchange for example, a prediction market on the 2020 USA Presidential Election. Catnip is built on the following layers:

How can alternative chains compete with Ethereum?

Ethereum has a significant lead in the market, owing largely to their strong early traction among developers and Dapps. But we are now seeing new alternative platforms looking to gain market share.

Each new platform will try to compete along the following dimensions:

The success case for the competition will depend largely on two fronts. How well Ethereum is satisfying current developer needs, and how difficult it would be for developers to switch to a new environment. But to be clear, if Ethereum can sufficiently scale throughput and continue to improve developer experience, it will be challenging for any other competitive platform to emerge at a scale that would threaten Ethereum.

Appropriately, developer adoption is a key metric to track. What platforms are new Dapps building on top of, and why? Today, Ethereum dominates developer market share, but we see early traction in some other platforms. 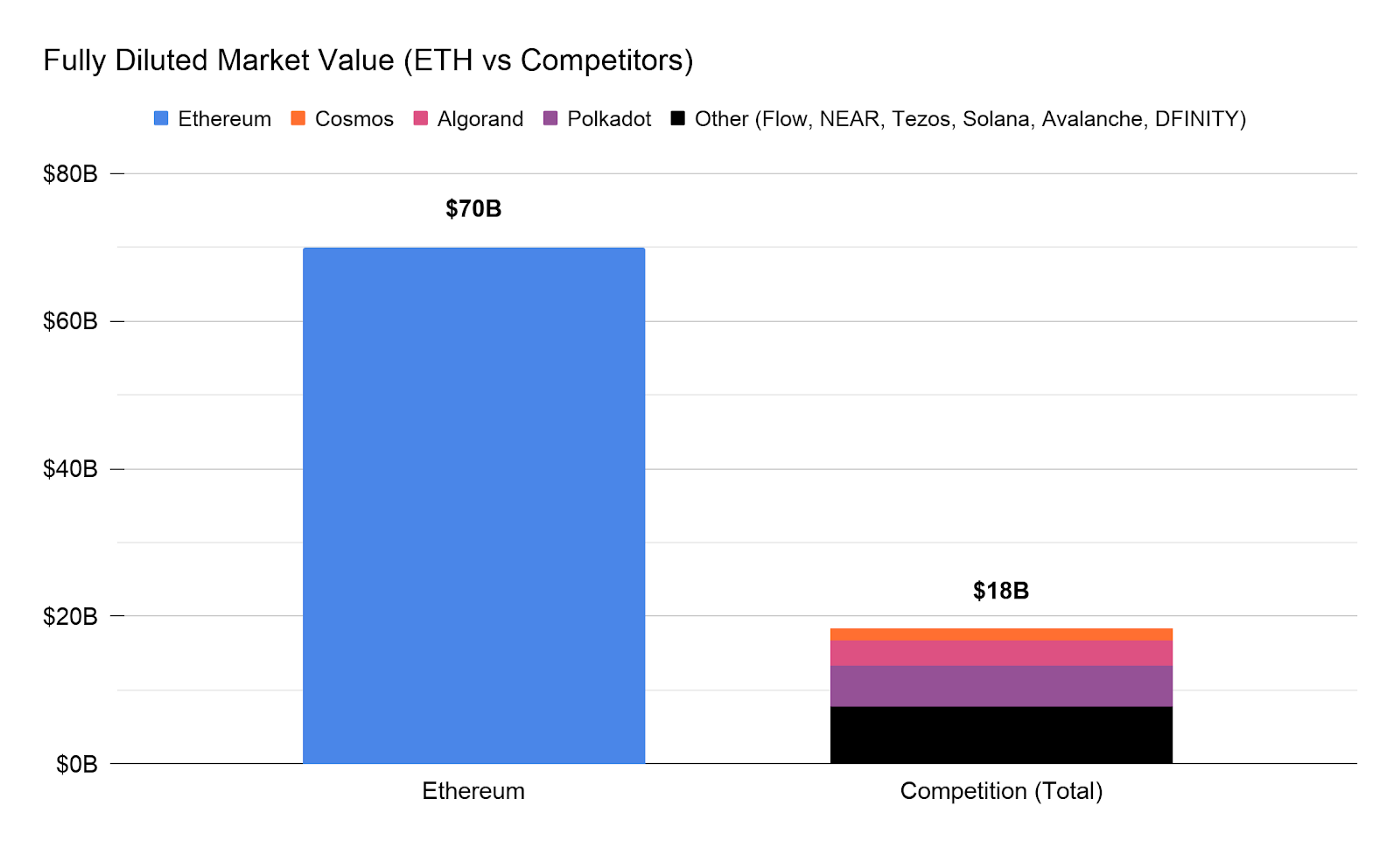 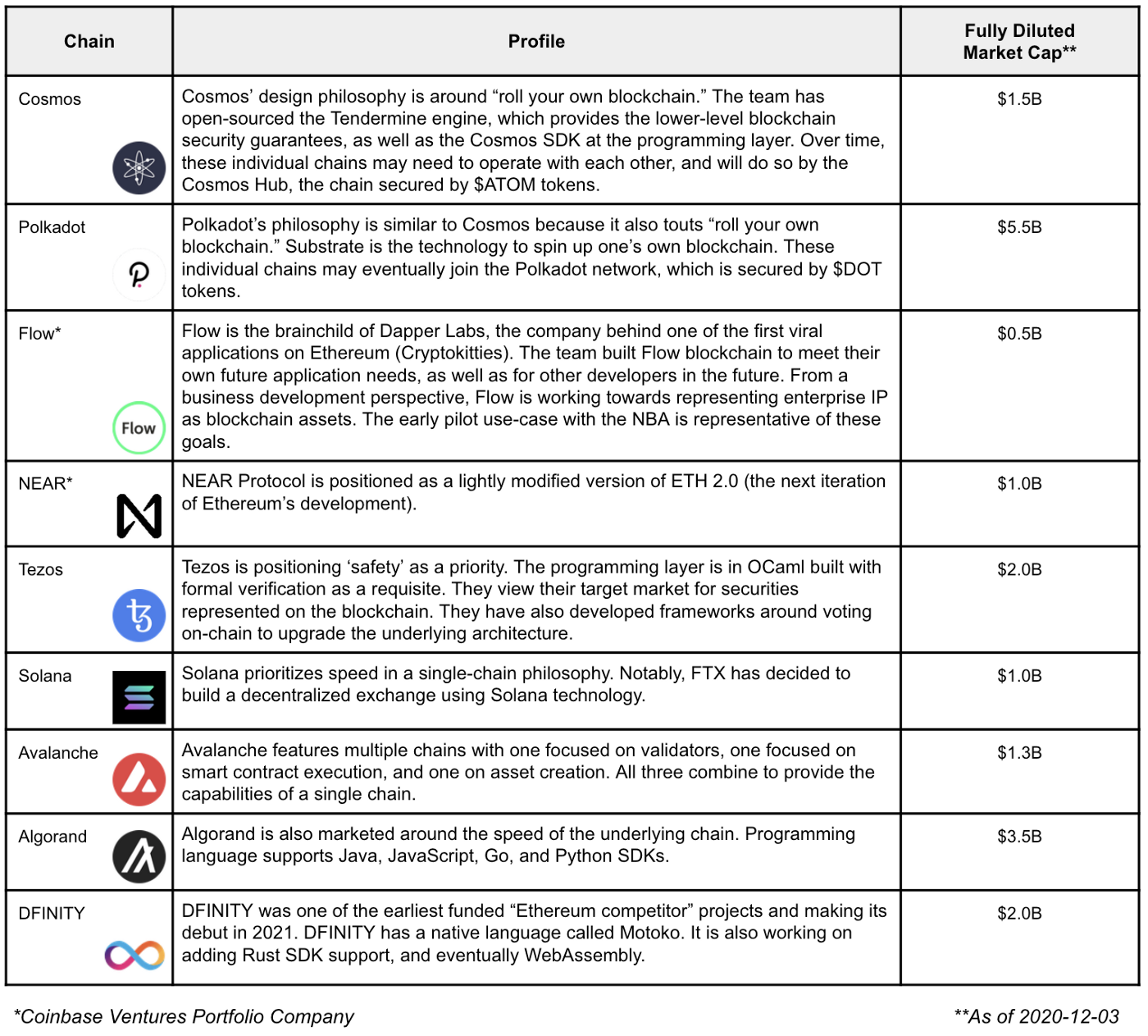 Today, there are benefits to building on Ethereum. For one, Ethereum has proven to be comparatively secure so far, possesses a robust developer tooling and ecosystem, and brings the largest user base. An application on Ethereum does not have to worry about bootstrapping its own network from the bottom-up, and can rely on the network effects of Ethereum. For these reasons, building on Ethereum helps remove some of the risk variables for the developer.

Developers must weigh these benefits and drawbacks when selecting a chain on which to build their applications.

New technology is enabling developers greater customization, flexibility, and control — yet it is still early. Developers can set up blockchains with their own validator security and customize the chain based on their application needs. Some of the front-runners in this category are Cosmos (via the Tendermint protocol) and Polkadot (via Substrate). Applications are created as their own blockchains using these open-source technologies and set their own rules. In fact, the above-mentioned Aragon effectively migrated from Ethereum to Cosmos.

After years of R&D, the Ethereum 2.0 deposit contract launched and met the minimum requirements of staked $ETH to progress to the next phase of launch. Currently, more than 1M $ETH has been staked.

The launch of the beacon chain, the backbone of the ETH2 vision, is the beginning of a multi-year phase. The industry expects another 1~2 years for the next phases to complete, at which point the staked $ETH can be unlocked. This is a significant milestone in the lifecycle of the $ETH asset and emerges as potentially the most important proof-of-stake opportunity for the near-term future.

While the ETH2 vision may take some years to fully come to fruition, the current iteration of Ethereum and its scaling solutions will likely be the near-term solution for existing applications — and will eventually integrate into a functioning ETH2. Because of this multi-year phase, there is a window for the new smart contract blockchains (described above) to gain developer mindshare and user traction. It will be interesting to see how Ethereum will fare from a fundamentals perspective during such time as it transitions to its new technology stack.

The opinions expressed on this website are those of the authors who may be associated persons of Coinbase, Inc., or its affiliates (“Coinbase”) and who do not represent the views, opinions and positions of Coinbase. Information is provided for general educational purposes only and is not intended to constitute investment or other advice on financial products. Coinbase makes no representations as to the accuracy, completeness, timeliness, suitability, or validity of any information on this website and will not be liable for any errors, omissions, or delays in this information or any losses, injuries, or damages arising from its display or use. Unless otherwise noted, all images provided herein are the property of Coinbase.