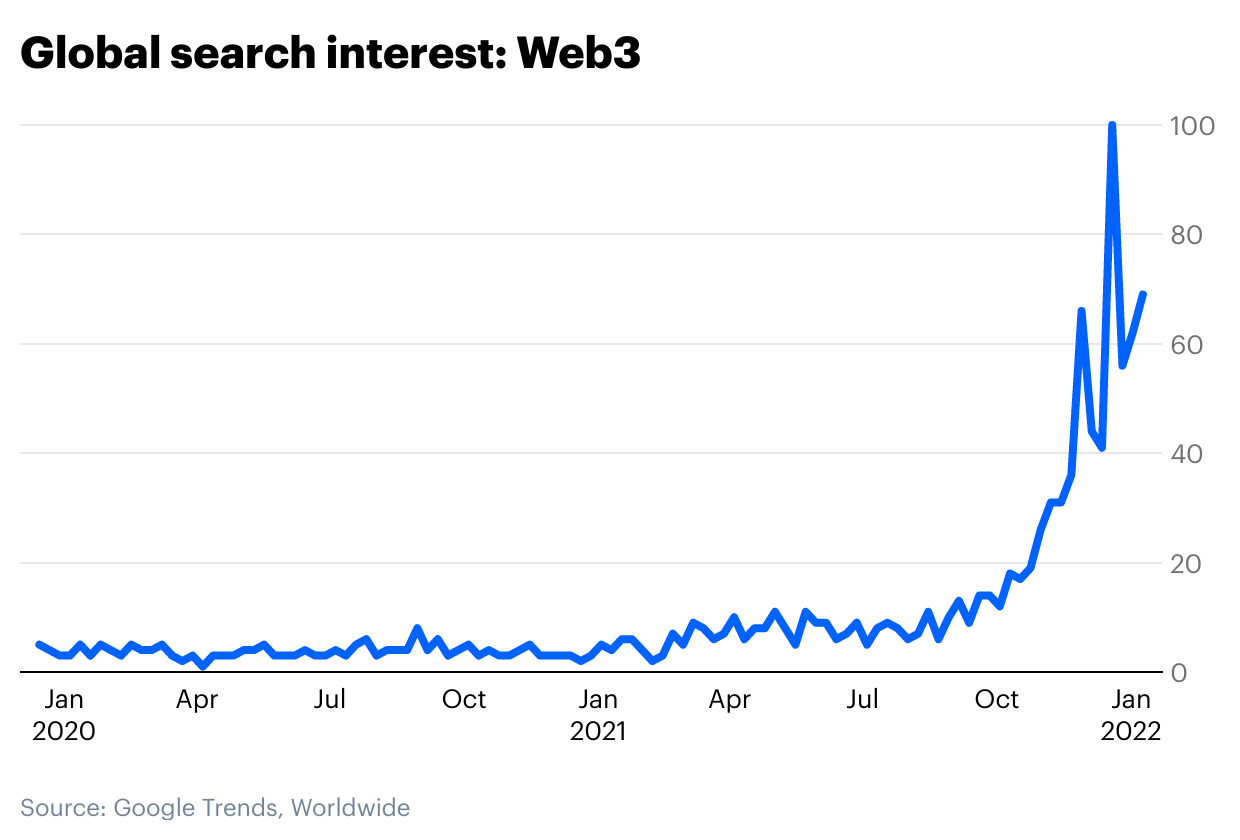 A lot of definitions have been thrown around, but at Coinbase, we generally think of Web3 as a trustless, permissionless, and decentralized internet that leverages blockchain technology.

Web3’s defining feature is ownership. Whereas the first iteration of the commercial internet (Web1) was read-only for most users, and Web2 allowed users to both read & write on centralized platforms (Twitter, Facebook, YouTube, etc), Web3 gives users full ownership over their content, data, and assets via blockchains. It empowers users to read-write-own. 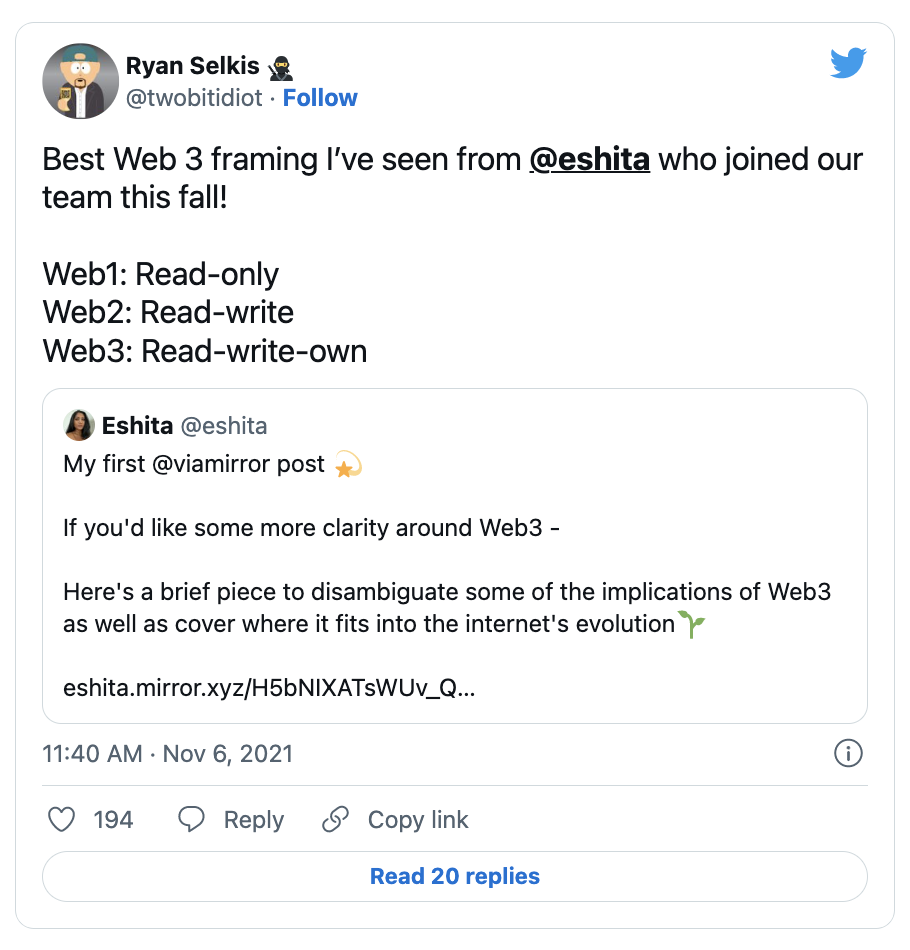 Where a third party like Facebook owns your identity and data in Web2, your identity in Web3 can move fluidly between platforms without your data being captured and monetized by service providers. While Web2 apps are centrally controlled, tokens in Web3 grant users the right to help govern the services they use, representing a form of ownership in the platforms themselves.

With that framing in mind, what does the Web3 stack look like?

The Web3 stack is still nascent and fragmented, but with much innovation over the years, it’s beginning to come into focus. What follows is not a mutually exclusive nor completely exhaustive lay of the land. Rather, it’s a framework for thinking about this landscape as it continues to evolve.

Let’s start from the bottom up.

At the bottom of the stack, we have the protocol layer. This is made up of the underlying blockchain architecture on top of which everything else gets built.

Bitcoin is the granddaddy of them all, and while it doesn’t play a major role in Web3 today, it pioneered the ability for someone to own a scarce digital asset through the use of public-private key cryptography. Following Bitcoin, came a range of layer 1 smart contract platforms like Ethereum, Solana, Avalanche, Cosmos, etc, that serve as the foundation for many of the Web3 applications currently in production.

Bitcoin and Ethereum each have additional protocols built on top of them. Bitcoin has networks like the Lightning Network (for fast and cheap payments) and Stacks (for smart contracts), among others. To alleviate its capacity limitations, multiple layer 2 scaling protocols have been built on top of Ethereum.

With the rise of many layer 1 and layer 2 networks came the need to bridge value between them. Enter cross-chain bridges that serve as highways that let users move value from one chain to another (useful cross-chain dashboards can be found here and here).

The infrastructure layer sits on top of the protocol layer and is composed of interoperable building blocks (what we’re calling “category primitives”) that are highly reliable at doing a specific task.

For example, Uniswap enables the swapping of one asset for another. Arweave enables data to be stored in a decentralized manner. ENS domain names can serve as a user’s identity in the world of Web3. A user can’t do much with each standalone application. However, when combined, these category primitives act like lego bricks that a Web3 developer can use to construct an app.

Atop the protocol and infrastructure layers sit the use case layer, where it all comes together.

Take a blockchain based game like Axie Infinity, which uses Ethereum tokens and NFTs that can be bridged to a low-cost/high throughput sidechain called Ronin. Players often use Uniswap to swap ETH for the tokens needed to play the game. Similarly, decentralized blogging platform Mirror uses the storage protocol Arweave to store data. Meanwhile, it leverages Ethereum to let publishers get paid in crypto, often by directing tokens to their ENS address.

You’ll notice that Uniswap appears both in our infrastructure and use case sections. This is because, while at its core Uniswap is simply a series of smart contracts, it also provides a frontend that users can interact with directly. Put differently, it simultaneously serves as a standalone user-facing app as well as infrastructure for other Web3 apps like Axie Infinity.

At the tippy top of the stack sits the access layer — applications that serve as the entry point for all manner of Web3 activities.

Want to play Axie Infinity or get paid for your content on Mirror? First thing you’ll need is a wallet, which serves as the main point of entry for most Web3 applications. Fiat onramps like Moonpay, Wyre, or exchanges like Coinbase help users trade their fiat money for crypto in order to get started.

With some crypto in a wallet, users can head to an aggregator like DappRadar to browse through and connect to all kinds of Web3 applications in one place. Other projects like Rabbithole help users discover and learn how to use various Web3 applications. There are also aggregators like Zapper, Zerion, and Debank that help users track all of their activities and assets across various apps.

Lastly, we’re close to a future in which Web2 platforms where cryptonative communities already gather, like Reddit and Twitter, serve as an entry point for Web3. Reddit’s long-awaited crypto initiative will let certain communities tokenize, rewarding users with tokens and likely NFTs for active participation. Twitter already boasts an integration with Bitcoin’s Lightning Network to let users tip others in BTC.

The protocols, infrastructure, user applications, and access points named above make up the nascent, yet evolving world of Web3: an internet owned by its users. Beyond ownership, the power of Web3 lies in its modularity and interoperability. Essentially, this means that there are endless ways that the above stack can be combined to create new and interesting use cases — a feature that we expect will lead to a Cambrian explosion of new, world-changing applications.

While the framework and layers we highlighted will likely stay unchanged, we expect the projects and opportunities within them to evolve dramatically in the coming years.

Previous editions of Around The Block