Special thanks to Mike Armstrong, Aaron Henshaw, Michael Atassi, Steven Willinger, and Shan Aggarwal for helping to inform this article.

Despite the rise of Bitcoin and Ethereum, along with the emergence of new categories like DeFi, NFTs, GameFi and DAOs, web3 developers represent less than 1% of the 31.1M software developers globally.*

So why are there so few developers in web3 today? For one, the tools and infrastructure available to web3 developers are much less robust than that of web2. This simply makes it more difficult to get started building, experimenting, and deploying in web3. That’s all quickly changing however, as the number of monthly active web3 developers hit all-time highs at the end of 2021. And to support this growing contingency, is a vibrant ecosystem of teams working to simplify the entire web3 developer journey, which will ultimately help unlock the next stage of web3 growth and innovation.

In this edition of Around The Block, we’ll explore the growing web3 developer stack. 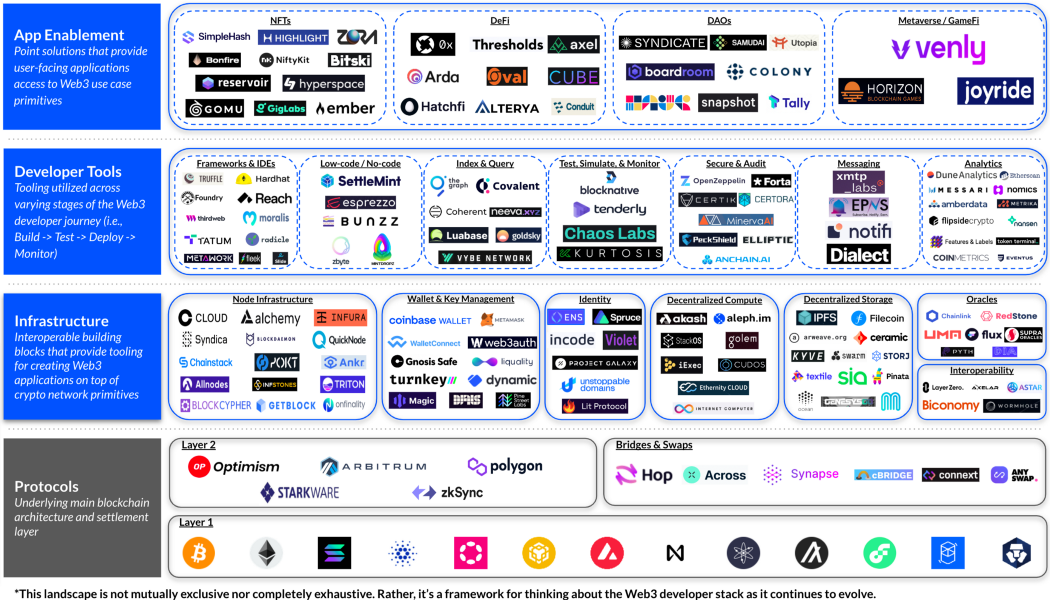 Building in Web2 vs Web3

Software development is the process of building computer programs. There are three main components to a given program:

The front-end that a typical user interacts with through a mobile or desktop browser is basically the same in web2 and web3. A web3 app like Uniswap looks similar to a typical web2 app because both front-ends are mostly created using React — a popular developer framework for web and mobile apps. 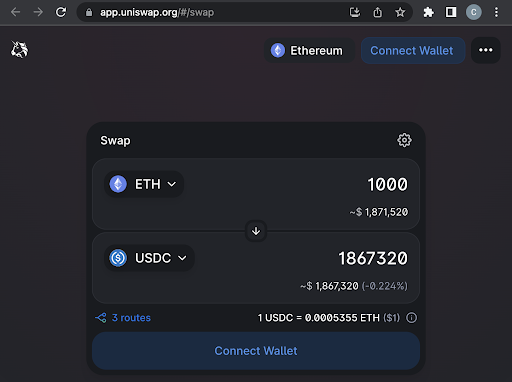 It’s under the hood where web2 and web3 differ. The backend frameworks and types of databases that make web3’s defining characteristic — user-defined ownership — possible are new and unique.

The tools that aid in the creation, deployment, and maintenance of web2 applications are incredibly developer-friendly, thanks to decades of cumulative development. Out of the box solutions, mature infrastructure, shared code libraries, and easy to use frameworks largely make building in web2 a breeze.

Web3 on the other hand still requires specialized expertise to interface with complex infrastructure and commonly involves many redundant processes given that the stack is less developed, leaving teams to have to reinvent the wheel. That said, the tooling that will help onboard the next 1M+ web3 developers is rapidly improving.

The first decision a web3 developer has to make is which blockchain protocol to build on. Building on Bitcoin is entirely different from building on Ethereum, and Solana differs from Ethereum, etc.

For faster and lower-cost applications, developers might want to build on a layer2 protocol — Optimism*, Arbitrum*, etc. For applications that need to port value from one chain to another, developers will want to leverage cross-chain bridges like Hop* or Synapse*.

Once these decisions are made, developers can start to incorporate building blocks that make user applications possible.

The next thing a developer needs to figure out is how their application will ultimately interact with the underlying blockchains. This is where infrastructure primitives come into play.

Node infrastructure — Nodes are where an app’s interaction with a blockchain “happens.” They’re computers that read the state of the blockchain and write updates to it once a user interacts with an application. Node infrastructure providers like Coinbase Cloud, Infura*, and Alchemy* let developers easily set-up, manage, or access blockchain nodes, saving developers considerable time and resources.

Identity — protocols like ENS* serve as a user’s identity across applications. Spruce* provides frameworks and toolkits that developers can use to verify user credentials to authenticate actions on Ethereum. For example, developers can use the Spruce ID toolkit to empower users to sign into apps with their ENS accounts. Additionally, companies like Lit Protocol provide developer tooling for granting access to content, software, and other data utilizing their tokens or NFTs.

Decentralized compute — Compute resources provide processing power that applications rely on to carry out computational tasks. Currently, most of the web’s compute is provided by centrally owned providers like AWS. Decentralized compute is a shift towards community-owned networks, in which compute resources are distributed in a permissionless manner at low-cost. Companies like Akash Network and Aleph.im have emerged to provide peer-to-peer compute resources that are highly-performant and optimized for smart contracts and blockchain applications.

Decentralized storage — Storing every piece of data associated with a given web3 app directly on blockchain nodes is costly. Rather than storing data on a centralized database, web3 developers can use peer-to-peer data storage protocols like IPFS, Arweave*, and Ceramic Network* for certain data. For example, web3 blogging site Mirror is built on Ethereum, but stores actual blog content on Arweave.

Oracles — For a typical Ethereum application, the blockchain stores transaction history and “state” (balances, smart contracts, and other variables). It can’t, however, natively store and interact with data from external sources — i.e. transaction history from other blockchains or “real world” data like the weather in San Francisco. That’s where oracles like Chainlink or Flux*come in, connecting blockchains to on-chain and off-chain data sources.

Low-code / No-code — These platforms enable user-facing applications to be quickly designed/deployed entirely via drag-and-drop interfaces. Companies like Settlemint provide developers with smart contract templates for NFTs to prevent web3 developers from having to reinvent the wheel.

Test, simulate, & monitor — It’s important to test and simulate web3 applications before they’re released into the wild. Companies like Tenderly* and Kurtosis* offer a variety of tools for simulating how smart contracts and transactions will behave once live, as well as tools for debugging any issues. Blocknative* provides dashboards and tools for monitoring transactions before they are submitted on-chain.

Security & audit — Given the potential for smart contract exploits, these platforms let developers apply security and audit best practices to their applications. OpenZeppelin, Forta*, Certik*, and Certora* all provide a variety of services, frameworks, and monitoring tools for developers to mitigate potential security risks and vulnerabilities.

App Enablement LayerThe application enablement layer ties all of the above layers into specific web3 uses. NFTs, DAOs, DeFi, and gaming each have their own bespoke developer solutions.

The protocols, infrastructure, and developer tools mentioned above make up the nascent, yet evolving web3 developer stack. The modular and interoperable nature of web3 means that the stack can be combined in endless ways to create new and interesting applications.

While the framework and layers we highlighted will likely remain unchanged, we continue to see new developer tooling primitives emerge and expect the entire stack to evolve dramatically in the coming years.

Coinbase Ventures will continue to invest in the next generation of platform and developer tooling that will ultimately onboard millions of developers into web3. If you’re as dedicated to building out the web3 dev stack as we are, we would love to hear from you — JK’s DMs are open!